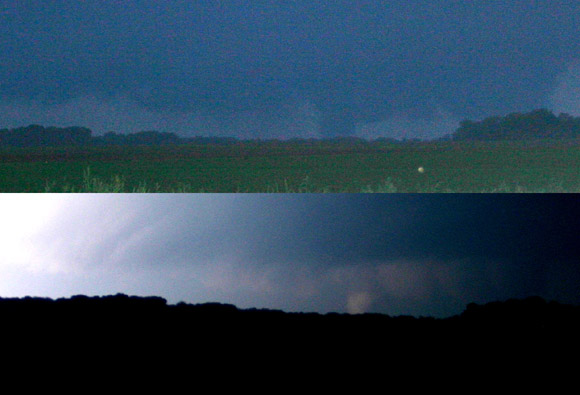 September 19, 2008, Santa Fe, NM - I use a zoom lens to capture photos of a spectacular lightning display occurring 25-30 miles away. See photos here.

September 14, 2008, Edwardsville, IL - A major road washout occurs just a half mile from my house in Edwardsville due to more than 5 inches of rain from the remnants of Hurricane Ike. Photos and more info here.

August 5, Jersey and Macoupin Counties, IL - A line of severe storms races across Jersey and Macoupin Counties, producing widespread wind damage. I try to keep up, getting some photos and video. I also videotape and, later, photograph lightning from the same line of storms in the Edwardsville area. Includes photos, video clips, and local storm reports.

June 30, near Santa Fe, NM - A strong storm in the foothills above Santa Fe produces copious amounts of small hail and some flash flooding. Includes photos.

June 4, 2008, Central Illinois - I watch a large and at times multiple-vortex tornado as it travels six miles across the countryside near the corner of Tazewell, McLean, and Woodford Counties, Illinois, northwest of Bloomington. Includes photos, video, and a radar image from the time of the tornado.

June 3, 2008, Missouri - I intercept two tornadic storms near Bowling Green and Troy, MO, but miss the tornadoes with the first storm due to no way to cross the Mississippi River, and narrowly miss a tornado on the second storm due to trees, hills, darkness, and a bad road decision.

May 30, 2008, West-Central Illinois - I see four tornado-warned supercells, three of which did produce tornadoes, over west-central Illinois near and southwest of Jacksonville. Includes numerous pictures and a radar image showing three of these storms with hook echoes.

May 26, 2008 Beijing, China Lightning - During a trip to China, I catch CG lightning striking near a train station in Beijing from my hotel room window.

May 2, 2008, Southwest Illinois - A day that could have been a major severe outbreak in Illinois wasn't, due to a squall line in the morning that had been much more intense earlier but was mostly weakening by the time it reached Illinois - which then stabilized the air limiting later afternoon storms. Includes pictures of morning squall line and storms trying to get going in the afternoon in a highly-sheared environent.

April 25, 2008, Missouri and Illinois - I stay just ahead of severe-warned storms in a squall line from Center, MO to Springfield, IL, as HP supercell structures embedded in the line produce large hail and damaging winds. Incluses photos, local storm reports, and analysis of what happened and why.

February 4, 2008 Lightning - As a line of strong storms approaches, I get some photos of in-cloud lightning - looking across a frozen lake!

January 29, 2008, Southwest Illinois - Yes - A January storm chase! I see a couple severe storms during a rare January tornado watch, and experience a temperature drop of more than 50 degrees in a few hours. And all this without getting more than about 20 miles from home! Includes photos, warning texts, and local storm reports.