Yes, really! A chase in January! And a very interesting weather day indeed. I had no real plans to chase today, but did keep up with the weather situation and when, by shortly after noon, it became apparent that severe weather could occur in my immediate area, I decided to head out. With marginal instability (it IS January, after all) but very strong low-level shear and a very strong cold front approaching, SPC had placed much of eastern MO and southern IL under a tornado watch. Scattered storms were developing between the STL area and the front, which was located near Columbia, MO around noon. I decided to check out a storm over northwestern Madison Co., then wait for the main line of storms along the cold front. I caught up with the storm near the Staunton, IL exit on I-55. Though it had heavy rain, it did not appear severe. Briefly, I did notice some rising scud that also looked to have a little rotation looking northeast from the exit, but this feature disappeared after a minute or so. I was somewhat surprised to learn this storm produced 3/4 inch hail near Bunker Hill, as it was never SVR-warned.

I headed back south on route 4 and after shifting south and north a bit, decided to wait for the approaching line of storms just ahead of the front, from a position a couple miles northwest of Marine, IL. The line didn't really look like much more than a band of TCU, with a couple showers imbedded. Indeed, all of the showers and storms I had seen so far did not look very impressive, rather appearing that they were getting torn apart by the intense speed shear before they could really get going. But then, a few miles to my northwest, I noted a tower that surged far higher than any of the others, and suddenly it started to look like a real storm: 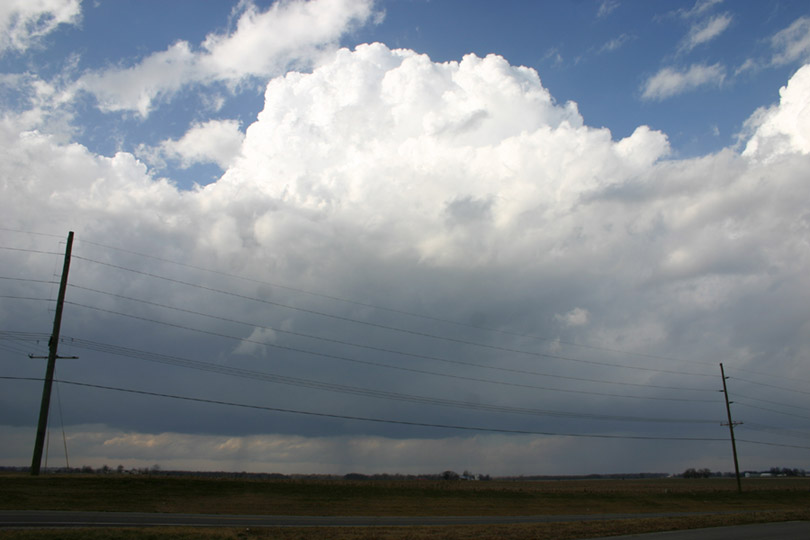 Very shortly after I took this picture a little before 1:30, the alarm went off on the weather radio, and a SVR warning was issued for this storm, indicated by radar near Carpenter, IL. A minute or so after that, I noticed this: 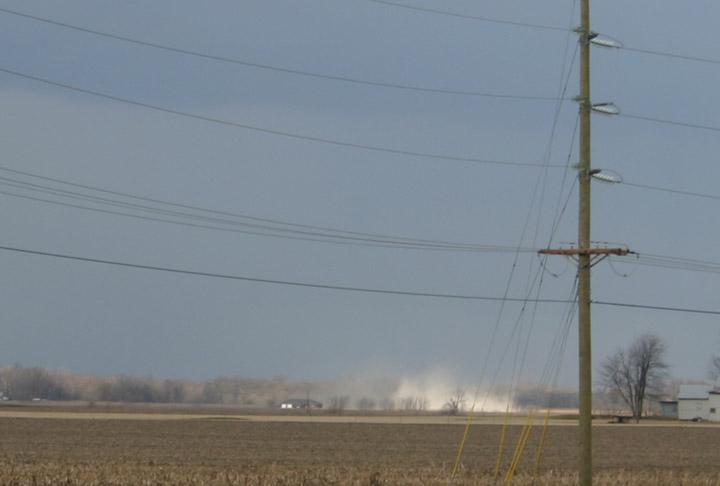 I am not sure whether this was a gustnado, a microburst, or possibly even if the dust was being picked up by an inflow jet - the inflow into the storm was very strong from my location. This dust cloud was probably 2 or 3 miles to my northwest. I am quite sure (but not 100% sure) that it was not created by anything like a vehicle on a gravel road, as the whole thing moved together and I never saw any vehicle. The contrast is as good as it is because there was a small patch of sunlight getting through the clouds just where this was. Over a minute or two, it evolved into a more diffuse and less dense area of blowing dust. But now the storm was losing its character as a distinct cell, as the whole line was filling in. There were no severe reports with this storm, but it did cover the ground with small hail in Worden, IL.

I then dropped south to catch another storm coming up the line. I got down to just east of Troy, IL, but saw nothing of interest. The storm did, however, produce numerous reports of hail around Collinsville.

With the front now very close, the chase was over. Quite an impressive shelf cloud, with strong shear, did form as I crossed the cold front near I-55 and route 143 around 2:30. The front side of the shelf moved north while the rear side moved south. However, there was no precipitation associated with this at my location, but it did look like there was some rain behind it well to my south. Indeed, pretty soon another storm did develop right along the front one county to my south. As I went to get a late lunch around 3:00, I began to get some precipitation from the back side of this storm, in the form of a mixture of rain and big, wet, slushy snowflakes - almost like soft hail, basically big slushballs. Just then a SVR warning was issued for this storm for St. Clair and Monroe Counties, and it did indeed did produce up to golfball hail in those areas and maybe even a brief tornado near Okawville. During the chase, I had noted temperatures as high as 70, but by now it had fallen all the way down to around 40 now, a little after 3:00.

EDIT - By 8:00 p.m., the temperature in Edwardsville had fallen further to 15. The official 8:00 p.m. temperature in STL, 16, was down 57 degrees from the record high of 73 a little more than 7 hours earlier. We don't get temperature drops that extreme around here very often!

During the next hour after 3:00 p.m., we got sleet mixed with freezing rain, then snow. Not too many days when I have seen both storms like I saw today and snow like this: 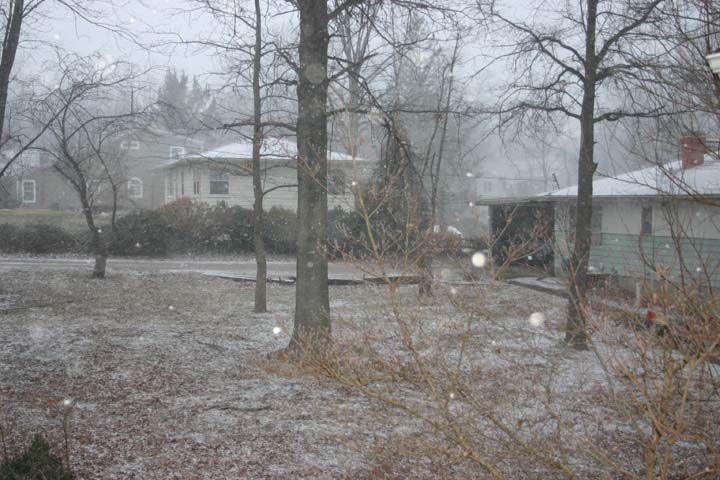