On a day when several chasers caught a tornado near Manchester, IL, I probably should have stayed in IL. However, I was drawn west into MO by the better instability there. It looked like a day with real chase potential, as an outflow boundary that had been draped across northern MO and central IL had been reinforced by several waves of thunderstorms in the same area, and seemed to be evolving into a synoptic stationary front. The air was very unstable south of this boundary especially near and west of the Mississippi River. The boundary would likely become the focus for new late afternoon and evening storms, and would also locally maximize directional wind shear. The following posts I made on the Stormtrack FCST (forecast) thread for the day further explain my thinking as it evolved prior to the chase.

The latest RUC is showing some really impressive forecast parameters for parts of central IL late this afternoon - CAPE as high as 4000 and SRH as high as 300. A little more directional shear would be nice, but there will be some - and the current convection seems to be reinforcing the outflow boundary that will likely be the focus for afternoon convection. I would not be surprised to see an upgrade in probabilities in the new day 1 outlook from SPC - If the RUC forecasts come close to verifying, this could be a big day. It is close enough that I have the luxury of watching and waiting, but I would think roughly a 100 mile radius of Springfield would be a good initial target.

I am liking the area about 50 miles west of STL right now. SPC mesoanalysis shows very strong instability in that area, and decent shear, too. Much better instability in MO than in IL right now, so I think storms will fire along the OFB there before they do in IL. Thinking about heading for that area soon, but given how close it is, I'd be more confident in doing so if I saw signs of storms starting to initiate. Increasingly I think the big question for eastern MO and IL in general is the degree to which the storms can get going in this area before dark. RUC still predicts they will. Daytime storms might be a surer bet in the KS/W. MO target, but that is too far for me now, so I am looking at the area just west of STL. I still think storms before dark are more likely than not there, but my confidence is not as high as it was earlier.

EDIT - One thing I forgot to mention that also makes me hold back a bit is that a problem in chasing that area is that to stay ahead of the storms, you're right back into the STL metro area and also dealing with river crossing issues. But if I'm convinced that's where the best chance of daytime storms is, I will probably go.

I headed out between 4 and 4:30 p.m., targeting the area noted in the FCST post just above. At that time, there was nothing but a little scattered virga on the radar - no storms had fired yet, but I was hopeful that they would in the area forecast by the RUC. I stopped in Wentzville, MO for gas, a bite to eat, and data. Since it looked like there was a little convection starting to fire to my northwest, up to the west of Bowling Green, I decided to head north on U.S. 61. Before long I could see storms to my north and northwest that seemed to be rapidly intensifying and that looked supercellular.

As it turns out, I caught 3 nice supercells around the Troy-Bowling Green, MO area, two of which produced - but bad road networks, darkness, the Mississippi River, and a navigational blunder conspired to keep me from seeing the tubes. So for the past week including this chase, my tally was at least 5 tornadic storms but no tornadoes. (Fortunately, this changed in a big way the day after this chase!) However, despite the frustration of missing the tornadoes, this was still not a bad chase, as once again I got some great structure.

The first storm I intercepted I was able to watch right from Route 61, a short distance south of Bowling Green. The storm quickly formed a beautifully backlit wall cloud and went SVR-warned around 6:30. I watched it for a while, then moved east with it for a little while on a side road, until it did this: 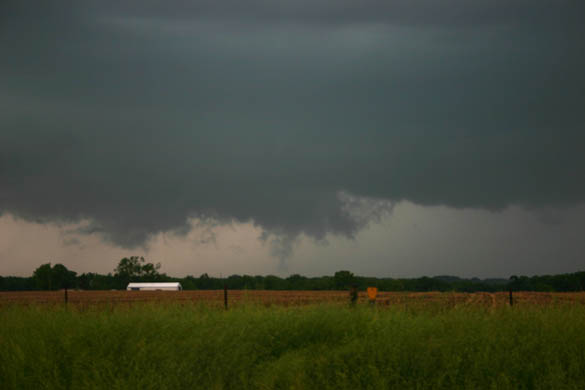 Almost certainly this was not a funnel; I saw no rotation with it. Probably it was a column of scud that formed under the storm's strong updraft. This photo was taken from southeast of Bowling Green, MO looking north sometime around 6:45 p.m. (vey approximate)

Same storm and location, a few minutes later. The storm was now evolving into an HP supercell: 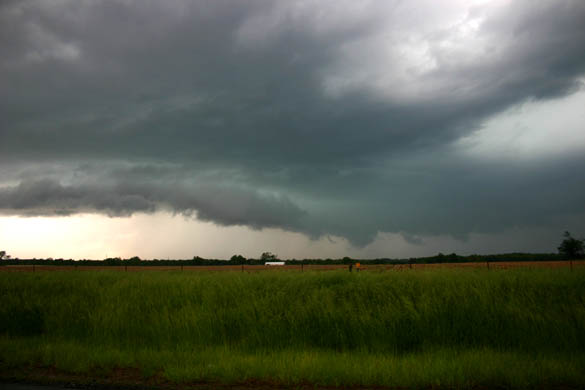 Eventually, this storm was getting to the east and about to cross the Mississippi River. Its structure started out as a classic supercell and evolved into an HP, as shown in the pictures above. Here is a more zoomed picture of the meso/wall cloud during this stage. Interestingly, as it approached the Mississippi River, it seemed to evolve back toward classic structure again. Since the only place to cross the river was at Louisiana, which would have put me on the wrong side of the storm, I broke off from this storm, and turned my attention to a new storm that had formed just to its west. The second storm also developed a nice wall cloud, and another interesting non-funnel lowering underneath: 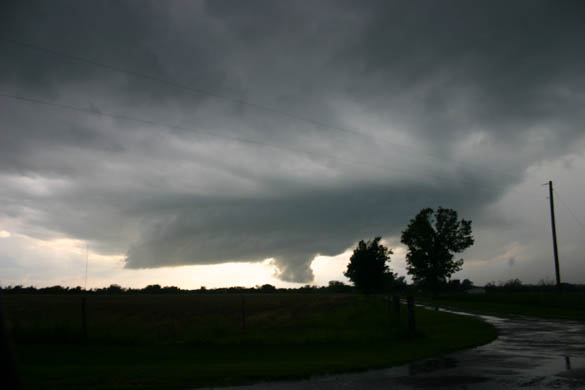 After a while the lowering under the wall cloud became illuminated by the sun, making for this interesting picture. I think these pictures were taken around or a little after 7:15 p.m. This wall cloud did eventually develop some rotation, before becoming scuddy and disorganized. As it did this, however, some of the scud was very close to the ground, and the storm produced a lot of CG lightning: 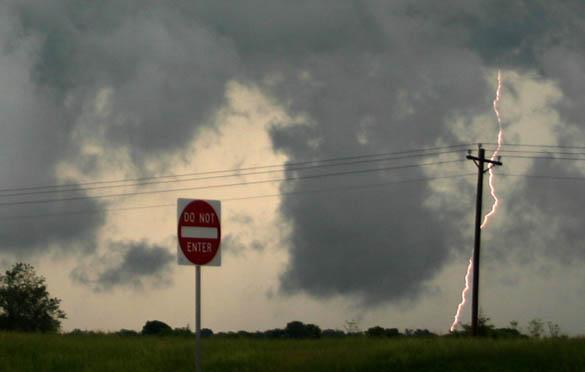 Another picture of a different bolt can be seen here. At this point there was a series of flashes each time it lightninged; I got these photos simply by pushing the button as soon as I saw the first flash in the series! Shortly after these pictures were taken, or perhaps about the time they were taken, the SVR for the storm was allowed to expire, as radar indicated that the storms had weakened.

Later, however, one of these two storms - I'm not sure which one, and they may have eventually merged - started looking real organized again, and again became SVR warned around 7:40, though I did not know it at the time. However, it was crossing the Mississippi River - and as noted above, the only bridge within 75 miles would have put me on the wrong side of the storm. Of course, it became TOR-warned and then produced a tornado once it crossed the river.

I later caught a 3rd storm which exploded from a very ordinary thundershower into a spectacular supercell with a nice wall cloud in about 15 minutes around sunset northwest of Troy - but poor road choices and the hilly woods of MO kept me from seeing the tornado it dropped in Whiteside, MO. By then, I was hopelessly in the jungle - through a break in the trees and by the backlighting of lightning, I got just one glimpse of the wall cloud about the time of the tornado - there were some pointy lowerings visible, but they were near the front edge and looked more like scud fingers than a tube, as best I can recall from the brief glimpse I got. Had I simply kept going back to U.S. 61 in Troy and gone north, I would have at least been aimed directly at the tornado, and on a faster road. But I took a turn a couple miles earlier that I thought would let me avoid the town and get back to 61 north of town, but instead it took me into the jungle and hills along the Cuivre River.

Here is a map from SPC showing the day's severe storm reports. Note the cluster of tornado reports near the Mississippi River in NE MO and west-central IL. A listing of the day's local storm reports from the St. Louis NWS office can be seen here.