After a long spell of dry, sunny weather in New Mexico, it finally began looking like an El Nino pattern beginning January 19. A strong of four separate storms - the same ones that caused flooding and mudslides in California and Arizona and up to five feet of snow in the higher elevations of those states - moved across New Mexico over the five-day period from Tuesday, January 19 through Saturday, January 23. These storms produced prolific snowfall amounts of 2 to 3 feet over the mountains of New Mexico. For example, over the five-day period, the Santa Fe ski area received 35.5 inches, and five other ski areas (Sandia, Pajarito, Taos, Sipapuu, and Ski Apache) received from 23 to 29 inches of snow. In some mountainous areas in the far western part of the state, there was even more, with a couple snow telemetry sites reporting 44 inches (near Toadlena) and 39 inches (near Mogollon). Lesser amounts occurred in the urban areas near the central mountains, with Santa Fe receiving around 8 inches over the course of the week (but a few inches more in the foothill areas). In Albuquerque, total amounts for the week ranged from less than in inch in the valley areas near the Rio Grande to 3 or 4 inches in some of the heights and foothill areas. Here are some of the highlights of what I observed.

The first storm, contrary to forecasts, ended up being the one that produced the biggest accumulations in and around Santa Fe. This storm began before dawn and by the end of the day produced between 3.5 and 4 inches of snow near the downtown area, but up to 6 in the foothills. In the morning, it heavily coated the trees:

As usual, the snow was more intense in the mountains. The snow fell heavily at Ski Santa Fe until around noon, dumping a foot of snow on the ski area: 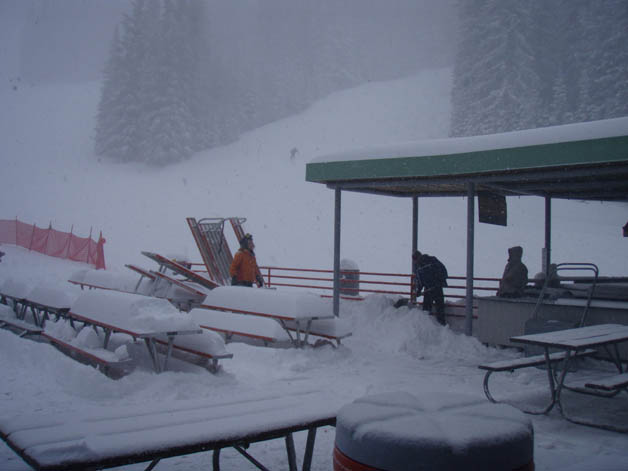 Even at the 10-12 thousand foot elevation of the ski area, the snow was unusually heavy and dense, making it hard work to ski in but just what the doctor ordered to replentish the snow pack - something that was much needed both by the ski areas to cover the rocks that were beginning to appear and provide a solid base, and for the runoff that will supply the area's reservoirs in the spring.

The second storm came in about 30 hours after the first one began, providing about an 18 hour break between the two storms. This one was lighter than the first one, but as this picture shows, the snow did fall quite heavily for a while: 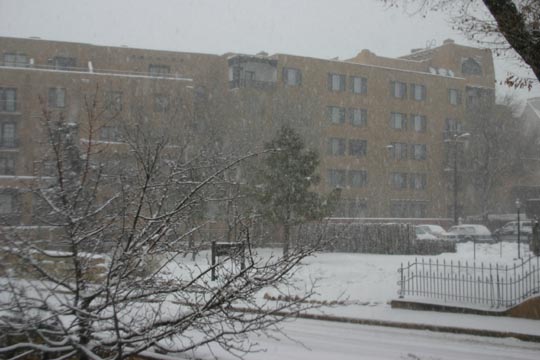 This storm produced around or slightly under 2 inches of snow in the city of Santa Fe, but 6 or 7 inches up in the mountains.

This was the least snowy day of the week in many locations, but impulses moving off the very strong storm system that was affecting Arizona and California at this time did deposit some additional snow in some areas, as for example the inch or so of snow that fell at the Sandia Ski area. The day was cloudy and gray, with wind, fog, and some freezing drizzle in the mountain areas.

Once again, heavier snow returned as what was probably the strongst storm overall pushed from Arizona into New Mexico. (Earlier, this storm had produced record low barometric pressure readings at some locations in California and Oregon.) Many mountain areas in New Mexico received 6-10 or more inches of snow on Friday. The road from the city of Santa Fe up to the Santa Fe ski area was closed intermittently in the morning, with snowfall amounts by noon ranging from around 1.5 to 2 inches in town up to 9 inches at the ski area. This snow fell from the pre-dawn hours until around 10 a.m.

In the early afternoon, skies partially cleared for a while, but by 3:30 another band of snow began to approach the Santa Fe area. This band intensified as it moved over the city, resulting in thundersnow. I heard at least 3 rumbles of thunder, one of which was quite abrupt and loud and likely indicated a cloud-to-ground (CG) strike. Indeed, the lightning detector maps indicated several strikes in the general area around Santa Fe. At the height of this burst of snow, visibility was down to only a block or two. This round of snow lasted only about 40 minutes, but in that time it produced a little more than a half inch of additional snow, which quickly slickened area roads. As the temperature dropped quickly after sunset, many parts of town experienced severe icing of streets and sidewalks.

A final piece of energy pushed into the central and southern parts of the state, resulting in additional accumulating snow. Steady snow occurred in the southern half or so of the state during the morning. The snow became more scattered in the afternoon, but as partial clearing resulted in surface heating below the very cold upper air, steep lapse rates resulted in strong instability, resulting in scattered but intense snow squalls, even in the northern part of the state: 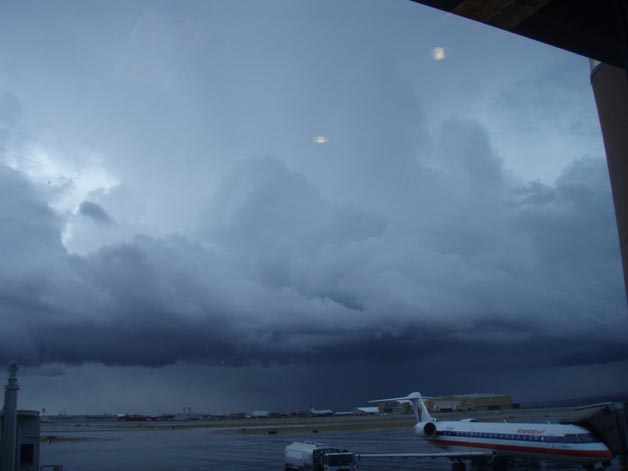 I observed these as I was driving from Santa Fe to the Albuquerque airport and waiting there for my flight to leave - additional details and more pictures can be found here. In general, the motion of these squalls was too fast for more than a few tenths of an inch of snow or less in valley areas, although they did briefly slicken roads because of the dense bursts of snow and graupel (and in a few areas, even hail) that they produced. But they did produce 4-6 more inches of snow in some spots in the central and northern mountains, and the day's totals were even higher in the southern mountains, closer to the center of the storm. In addition, they resulted in a second straight day in which thundersnow occurred in New Mexico, this time in the Manzano Mountains southeast of Albuquerque. As can be seen in the picture above and other pictures here, the structure and appearance of these squalls strongly resembled that of summer thunderstorms.

After Saturday, the weather finally settled down for a few days. However, the El Nino influence on the weather pattern appeared to be continuing, and additional strong storm systems were expected to affect the area again within the following week or so.