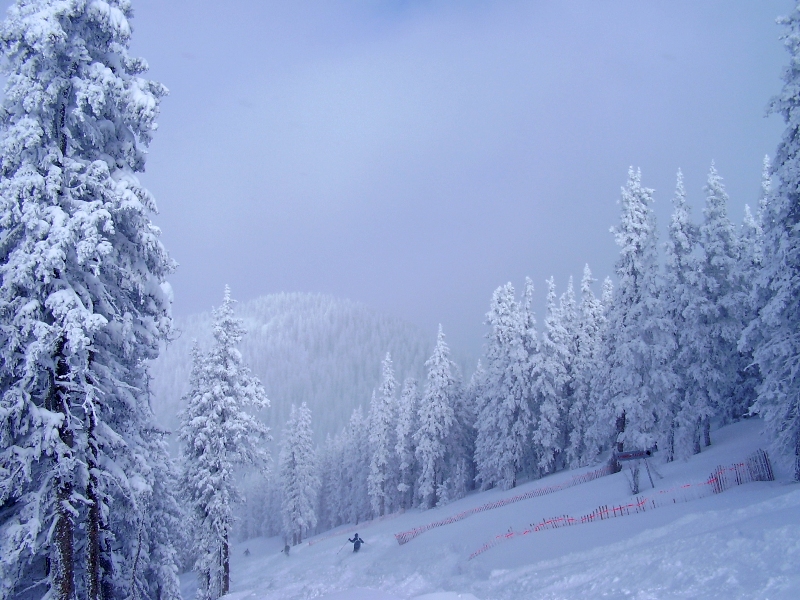 
Ski New Mexico? Heck, I keep having to tell people it actually snows in New Mexico. I guess a lot of people in the Midwest and Northeast think it is just like Phoenix, Mexico, or Southern California. But yes, Virginia, it does snow in New Mexico. In fact, in the mountains of northern New Mexico, it snows A LOT, and even in the central and southern parts of the state, the mountains can get quite a bit of snow and good skiing is often to be had. It is true, though, that New Mexico has been impacted more than most states by global warming/climate change. This trend represents a threat to many ski areas across the United States, but the impact has been perhaps greater in the southwest (CA, NV, AZ, NM, and southern CO) than in any other region.

That said, New Mexico is a great place to ski, especially in the more reliable nothern and higher-altitude ski areas. The combination of good quantities of light, fluffy snow, small crowds, and spectacular deep blue skies make it, IMHO, as desirable a ski destination as any of the other Rocky Mountain states to its north.

In these Web pages, you will find my (highly opinionated) ranking of New Mexico's ski areas, along with my thoughts on the up and down sides of each ski area with which I have experience. In this new 2015 revision of these pages, I discuss the varying impact of climate change on different NM ski areas (some have been impacted much more than others), and have also added information on a couple ski areas in the nearby far-southern part of Colorado. Because of the growing impact of climate change on New Mexico skiing, I have also given greater weight in this year's ranking to the ability of ski areas to remain operative and have long seasons even in poor snow years. Generally speaking, areas that can do this well have moved up in the rankings, while ones that cannot have moved down. I have also included links to the official Web page of each of the ski areas, along with other information on New Mexico skiing that I hope you will find helpful. So here are my Totally Opinionated Rankings - click any ski area for more information and the reasoning behind my rankings:

And in nearby southern Colorado:

Note: The information contained in all of the links above has been updated so that it is current as of January 19, 2015.