Ski Santa Fe, though well-known throughout New Mexico and to skiers from Texas, is less-known in the rest of the country than areas such as Taos and Angel Fire. Nonetheless, the skiing is some of the best in New Mexico, in large part due to the high altitude of the "ski basin," as it is known locally. In fact, the summit elevation of Ski Santa Fe, 12,075 feet above sea level, ranks in the top ten ski areas in the United States for lift-served elevation. What this means for you is that, even when warm spells strike the lower elevations, it is cold enough up here for the snow to hold up well. What it also means is that this ski area, along with Taos Ski Valley, has stood up to New Mexico's recent warm, dry winters much better than have other ski areas located at lower elevations and/or farther south.

Once a good base is built up, usually by January, the area is set for the season. The high elevation also means that the ski area is sometimes socked into the clouds, which on the one hand can mean low visibility and biting cold, but on the other hand it creates beautiful scenes like the one above, when the frost on the trees combines with heavy snowfall to create "snow ghosts" - trees completely covered in snow, which sometimes take on a ghostly appearance.

There is something at Ski Santa Fe for every level of skier. Over the vertical drop of 1725 feet, there are runs ranging from easy cruisers to terrain that will challenge the best of skiers. The beginner area is one of the best in NM, and the grooming of the green and blue runs is as good as I have seen anywhere in the United States. For the black diamond skiers, there are plenty of steep, bumpy runs, and also large areas of untamed tree skiing - but beware not only of trees but also rocks and cliffs if you head into these areas. This rugged terrain is but one reason why you will see that the majority of skiers here wear helmets - actually a good idea at any ski area. On a clear day, be sure to take at least one run on Gayway, a groomed blue run on the upper mountain accessed from the Tesuque Peak triple chair. The view from this run is one of the best in skiing anywhere - you will feel like you are on top of the world!

The main downside to Ski Santa Fe is that it gets quite crowded on weekends and during holiday and spring break periods. The opening of the Millenium lift in the 2006-07 season, however, has greatly alleviated lift lines on the upper mountain - even when it is crowded, lift lines on the Millenium lift and the older Tesuque Peak triple chair are usually short. However, the quad chair from the bottom of the mountain stops frequently and does get lines when it is crowded, although a new automatic lift loading system has reduced the stopping somewhat. Still, if you are there on a crowded day and you are an intermediate or advanced skier, it is usually best to head for the upper mountain right away. Of course, if you can go during the week, it won't be crowded even on the lower lifts, unless it is a holiday or spring break period.

Another major draw of Ski Santa Fe is its nearness to the city of Santa Fe - one of the oldest and most culturally interesting in the United States. There are lots of great restaurants, historical sites, and artistic and cultureal attractions that will give you lots of other things to do besides skiing, and will keep any non-skiers in your group happy for days on end.

Upsides: Something for every level of skier, great views on clear days. The high elevation means good snow conditions when areas at lower elevations may have slush or bare spots. Historical Santa Fe in the valley below means lots to do in addition to skiing.

Downsides: Crowds on weekends, holidays, and spring break, parking setup not the best on crowded days, can be very nasty during storms due to high altitude and open exposure of parts of the upper mountain. Because of limited snowmaking capacity, Ski Santa Fe regularly misses its goal of opening by Thanksgiving, and open terrain may be limited in bad snow years.

Info Notes: Totemoff's, on the mountain near the base of the two triple chairs serving the upper mountain, is a good place for lunch or an apre' ski drink. While Totemoff's does serve alcohol, the main base lodge at the bottom of the mountain does not.

Because of the high altitude, you may get out of breath here a little more easily than other ski areas you have visited - especially if you have just arrived in the Santa Fe area. Keep in mind, too, that if a storm has moved in, care must be taken driving back into town at the end of the day. On a stormy day, 4-wheel drive is best, and rear-wheel drive should be avoided.

If you have young children, the Chipmunk Corner Children's Center provides a variety of useful services. Depending on the age of your child, options include day care, snow play, and children's ski school. The Children's Center even has its own ski run, serviced by a "magic carpet' conveyor lift, and separated from the rest of the ski area.

Lodging: There is no slopeside lodging, but lodging of every description and price range is available in Santa Fe. It takes about 30 minutes to drive up to the ski area from town in good weather, though it can take longer during a snowstorm. Actually, with all the culture, dining, and apre' ski possibilities in Santa Fe, you probably would not WANT to stay slopeside even if you could!

What's New - A couple of new runs and a large addition to the base lodge were added in 2011 and 2012. A 12,000 square-foot, two-story addition was added to the north side (back side relative to the slopes) of the base lodge, which added 700 new seats to the food service area and added much-need space, better organization, and more lockers to the ski rental area. The ski shop was also expanded.

As mentioned above, an automatic loading system - basically a conveyor that you ski onto so the chair seems to come in slower when you load, was added a couple years ago to the Super Chief Quad chair. These systems are common in Europe, but this is the only one I have seen in the U.S. This has cut down on the frequent stops of the chair, though it still may stop quite a bit when the ski area is busy. Also relatively new is the "magic carpet" conveyor lift in the children's area, replacing an older handle tow. Future plans for upcoming seasons include an additional beginner area behind the lodge and possibly an expansion of Totemoff's.

This picture shows the Fall Line run under the Tesuque Peak triple chair in January, 2007 after a 19-inch snowfall. It was taken the same day as the picture above and the one on the main NM skiing page: 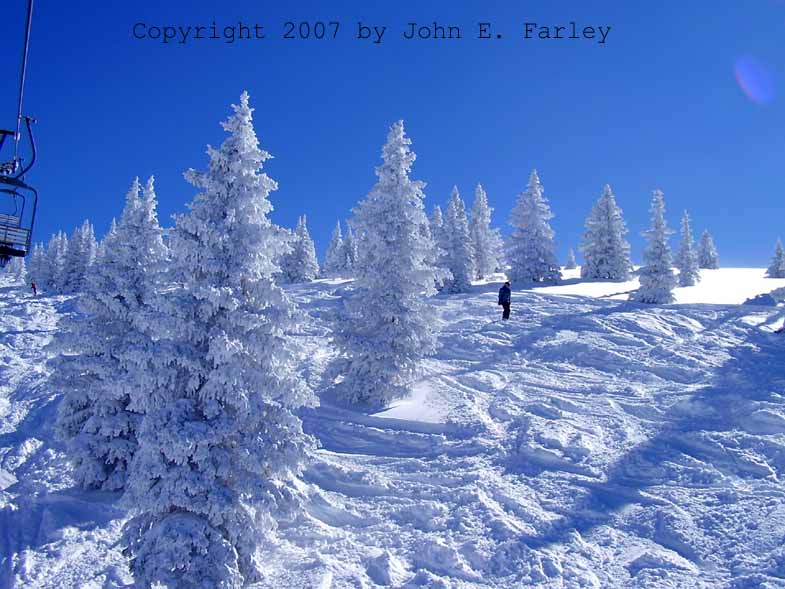 The picture below shows the view from the new Millenium triple chairlift: 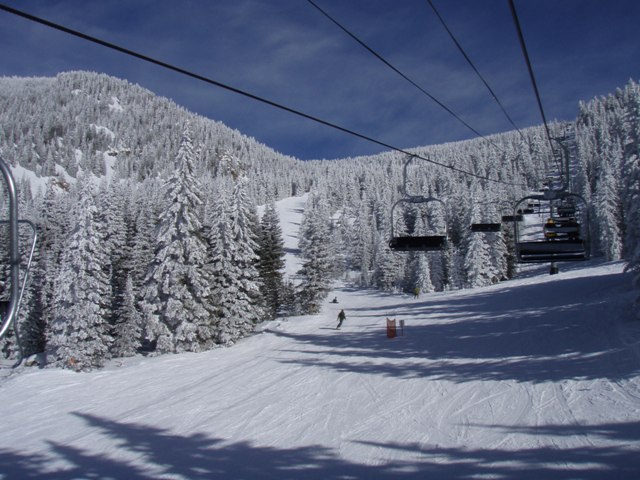