Having ended up in La Junta after the previous day's chase of the tornadoes east of Trinidad, I was a bit far north for today's expected show in New Mexico. Morning convection had largely stabilized the part of NM north of I-40 and east of the mountains, so I figured that if I was going to chase there, I would have to go south of I-40, which would be just a bit too far to reasonably get to from as far north as I was. As it turned out, there was one tornado near Cuervo along I-40 that I probably could have gotten to, but most of the action in NM was well farther south, as I expected. So instead of going south, I decided to see what I could intercept near the mountains in Colorado. With the front having been pushed a bit farther west, it seemed likely that storms today would initiate over the mountains, perhaps even some distance west of the Front Range, but that they would eventually move onto the plains. SPC had most of the Front Range and adjacent plains under a slight risk, and unlike driving 5 or 6 hours south, hunting for storms along the Front Range would take me closer to home if nothing developed.

I decided to head to Trinidad and go from there, figuring I could blast either north or south on I-25 depending on where the best storms looked to be. By around 2:00 p.m. a few strong storms were occurring over the mountains. Both visually and on radar, the best ones in reach seemed to be northwest of Walsenburg. So I headed that direction from Trinidad, targeting a storm that looked decent from a distance and that soon had a SVR warning. This storm was indeed part of the only cluster of storms that produced any severe weather in CO this day, a report of 1-inch hail near Rosita in Custer County. But by the time I was able to catch up to the storm I had targeted, now near the Rye/Colorado City area, the storm had weakened and all I was able to see was a rather unimpressive shelf cloud and a few flashes of CG lighting.

Hence, I decided to call it a chase and head home to Pagosa Springs. But the day still had a surprise for me. As I crossed over La Veta Pass, the same cluster of storms I had been observing had developed into a broken line of storms from around that part of the Sangre de Cristo Mountains southwestward across the San Luis Valley and on into the San Juan Mountains in northern New Mexico. As I came through one of the small towns where you enter the San Luis Valley on the west side of La Veta Pass (I think it was Ft. Garland but it may have been Blanca), I was in strong, cool outflow from the storms to my east and south when I saw this ahead of me along the road, looking west: 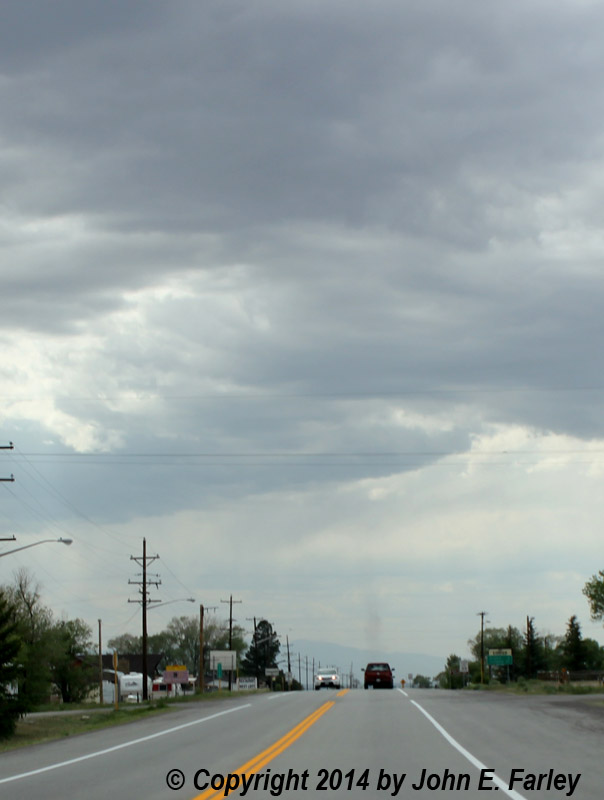 Normally seeing something like this in the San Luis Valley I would think "dust devil," because that area gets a whole lot of them. But as you can see, this was under high-based TCU along the northern edge of the broken line of storms, and it was in or along the leading edge of the cool, gusty outflow from the storms, so I think it is pretty clear that this was actually a gustnado, not a dust devil. I could not see any funnel or rotation in the clouds above, so I do not think it was a landspout - gustnado seems to be the right classification. More than I thought I was going to see at this point of the chase! It kept going for three or four minutes after I first noticed it, but it was gone well before I could catch up to it.