I chased locally on May 13, and it came out better than the previous day's much longer chase to western MO. Today, I got on a relatively isolated cell that crossed into Monroe and St. Clair Counties, IL from Jefferson Co., MO. It never quite got warned, but the STL NWS did put out a Special Weather Statement indicating that the storm had low-level rotation, and it sure looked that way to me. The storm looked quite good for a while, and I managed to get a couple decent structure pics.

I was watching pretty closely for a possible chase just east or southeast of St. Louis, as the RUC model forecast an area of decent instability tracking from around Monroe and Randolph Counties, IL up toward the Effingham area in the later afternoon/early evening. Winds in the area backed a little to a southeasterly direction, probably due to the impact of a meso low/mesoscale convective vortex that was left over from the morning action from Tulsa into southwest MO that was now approaching the St. Louis area from the southwest. The RUC model forecast that as this moved in, the area southeast to east of St. Louis would develop some decent storm parameters. In this area, the model was predicting CAPE as high as 3000, and that the combination of that instability and the slightly backed winds could produce a small area with an energy-helicty index as high as 3. It also initiated precipitation south of St. Louis, probably owing to the triggering effects of the same mid-level jet max that had caused the earlier formation of the bow echo that affected the area from Tulsa to southwestern MO. So with all this predicted by the model for the late afternoon or evening period, I figured I needed to check radar periodically and blast southeast at the first sign of initiation. When I saw a small cell pop up in southern Jefferson County, MO, I knew it was time to head out and was under way a few minutes after 4 p.m.

I headed south through Lebanon, IL. Twice I briefly started eastward, expecting the storms to fire farther east along a line of agitated cumulus southeast of Lebanon, about through St. Libory. But both times I backtracked quickly, the first to get farther south when the storms in Jefferson County looked to be intensifying and the biggest tower I could see in the line of cumulus was southwest of Mid-America Airport. I cut east off route 4 at St. Libory to get ahead of the line, but by then the original cell had become unimpressive and the cumulus in the line also looked less impressive. But suddenly the storm in Jefferson County pulsed up again, intensifying quite a bit in a short time. So I backtracked west, figuring to intercept the storm near Waterloo. It grew into a short line of storms from Jefferson County ENE toward a location east of Belleville, but the two cells nearest the tail-end of the line looked the most impressive on radar and, eventually, visibly. As I jogged west toward Waterloo at Hecker, I could see a wall cloud to my WSW under the updraft base at the tail end of the line. At the same time, the radar began to show a notch to my north, just west of Smithson, and by the time I was a couple miles west of Hecker, looking due north, I could see this: 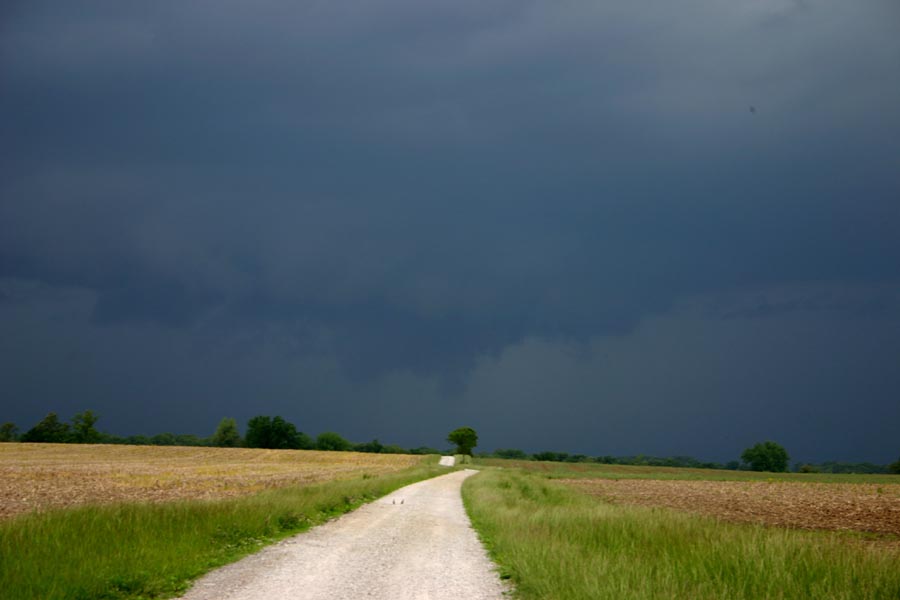 Since this was to my due north and moving fast, I quickly backtracked to Hecker and headed north toward Smithson, turning off to the east when I got close to the storm and stopping for more pictures. The lowered area wrapped up somewhat with rain and started to get ahead of me, moving roughly over Freeburg. About this time, the NWS issued a significant weather advisory/special weather statement for a strong storm near Freeburg, noting the potential for half-inch hail, 40 mph wind, and very heavy rain with the storm. More notably, they mentioned that radar was detecting some low-level rotation, almost certainly in this part of the storm. (Note: The part about the wind certainly verified, as chaser Dan Robinson reported 50 mph wind in Mascoutah.)

As that area of interest began to get ahead of me, I noticed that the wall cloud to my southwest, which had dissipated for a while, had now re-formed, and was looking quite good and headed right for my location: 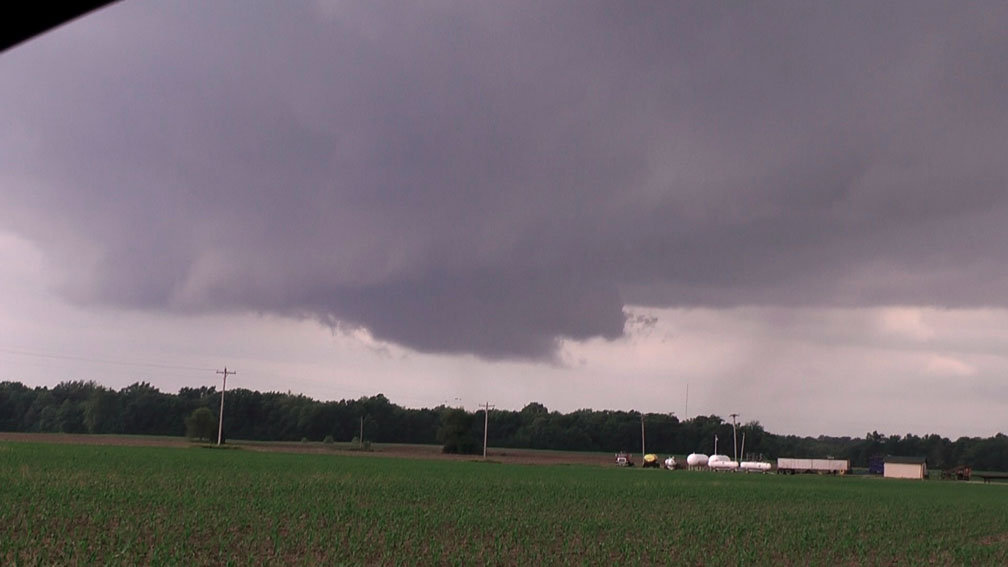 I sat there, watched, and got some video for as long as I could until the wall cloud was getting close enough that I needed to move. It had strong upward motion on the leading edge, but no real rotation that I could see. I then moved south to let it pass, and stairstepped my way northeast to a point about midway between Freeburg and Fayetteville on route 13. At one point along the way I stopped and got video of some rather wild cloud motion, but it was evident that despite this, the wall cloud was becoming less organized, and that the cells farther east along the line were becoming the predominant storms with the tail-end storm weakening. End of chase, but a very pretty little storm without having to drive very far!

As the meso low raced through the STL area, a new bow echo formed along its leading edge near the southwest edge of the metro area and eventually caused some roof damage near the St. Louis airport, where a 63 mph gust was recorded. Interestingly, that storm, which passed to the northwest of the cluster I was on, did not look at all impressive on radar until around the time of the wind damage report, but it seems to have intensified just enough to force the strong mid-level jet winds down to the ground for a while near the airport. And that part of the storm was moving - 70 mph acccording to the warning that was issued for it, and it certainly looked that way to me on radar as it raced up into Macoupin County.

I have to say that the RUC model nailed it in its forecast of an area of decent instability tracking from around Monroe and Randolph Counties, IL up toward the Effingham area in the later afternoon/early evening. I don't think the CAPE quite got to 3000, but a mesoscale discussion from SPC when they were considering a watch for this area did mention that the CAPE was around 2000. As the meso low approached, the surface winds ahead and east of it increased, with a pretty stiff southeast wind for a while. But because the storms I was on were southeast of the meso low, they had again veered a bit, and were generally SSW in the environment near the storm (though I did get some inflow directly from the south when I was south of the storm). So although there was some directional shear, I think it decreased just enough in the immediate storm environment to keep the storm from becoming tornadic or even a persistent supercell, although it certainly did try a couple times. Not enough for tornadoes, but definitely enough for a pretty storm.