I managed to get on the intense and photogenic supercell that passed north of the STL area late this afternoon. This storm produced up to 2-inch hail, with numerous reports of golfball hail from Lincoln County, MO east through Macoupin County, IL, and treated me to at least one funnel cloud toward the end of the chase. There were also scattered reports of high wind and/or wind damage, the most serious in the Bunker Hill area, where power was out in the entire town and route 159 was closed just to the north due to 10-15 utility poles down across the highway. Other roads in the area from Shipman to Bunker Hill were also closed due to downed utility poles. There was also a report on KSDK-TV of a car with several occupants lifted by the wind and deposited in a cornfield - luckly the occupants escaped injury.

First, though, before getting on the storm of the day, I got suckered southeast on storms that fired around 2 p.m. just SE of the STL area. They were quite discrete early in their lives, and at one point 4 of them had SVR warnings. As it turned out, they actually looked their best when I was behind the storms north of Lebanon, looking east. But I WAS behind them, and even moving at 30 mph, it took me until the Nashville and Pinckneyville areas to catch up. By then, they had become more linear, even more high based than they started out, and weaker. I watched the storm west of Pinckneyville from there for a few minutes; still SVR-warned for hail, but looked very unimpressive.

By then, I had heard about an isolated supercell that had formed north of Warrenton, MO. I decided to give up on the southeastern storms and blast back NW to try to catch the supercell. Best decision of the day! As I drove up I-64 to I-255 to get an intercept somwhere in the Alton-Bethalto area, I could see frequent overshooting tops. Although I could see updraft towers at the southwest edge of the storm, the overshoots occurred much farther northeast. At the time I thought that this was because of the updraft being tilted and carried downshear, but once I got close to the storm I realized that it was HP. So the overshoots were occurring above the main updraft/meso on the front side of the storm. A picture showing one of these overshoots, taken from I-64 at a distance of 30-40 miles from the storm, can be seen here. You might think from this picture that the storm was linear, but it wasn't, as can be seen from the radar loop linked at the end of this report.

The storm's track along the northern border of Madison County (and also affecting southern Jersey and eventually Macoupin Counties, and earlier Calhoun County) was fortunate for my chase, because I could head right up I-64 and then north to the storm on I-255, figuring I would exit somewhere from Wood River to where the freeway ends at Fosterburg Road depending on the position of the storm. Throughout my entire time on I-64 and I-255 I could observe the storm both visually and on radar, and the radar showed that the storm was maintaining very high reflectivity, indicative of large hail, a lot of hail, or both. As the storm was tracking through Godfrey just north of Alton, I decided that exiting 255 at route 111 would be my best choice. I could get a clear view of the storm from the Bethalto airport, then blast east on route 140, which crosses 111 at the northwest corner of the airport. This worked pretty well, though I realized I only had time for a couple pictures at the airport due to the fast (40 mph) movement of the storm, pretty much due east. I got back on 111 and turned east on 140. Things got crazy, as it was now about 5:15 p.m. so lots of traffic - then the sirens blew and the RFD hit with lots of blowing dust, and drivers freaked out by the sirens and wind. I was afraid I would get too far behind the storm to catch up, and I did indeed fall a little behind during the congestion and chaos in Bethalto. Nonetheless, I managed to stay pretty close to it, but in the RFD wind a mile or two behind the gust front, as I drove east through Hamel to Alhambra. Finally a little east of Alhambra, I got ahead of it again. Meantime, I was hearing lots of reports of golfball hail and some of wind damage just to my north, near the Madison-Macoupin County line. At one point between route 159 and Hamel I noticed a big cloud of dust to my north being blown up by the outflow wind. Here are a couple pictures as the storm produced large hail and high wind in the Bunker Hill and Staunton areas: 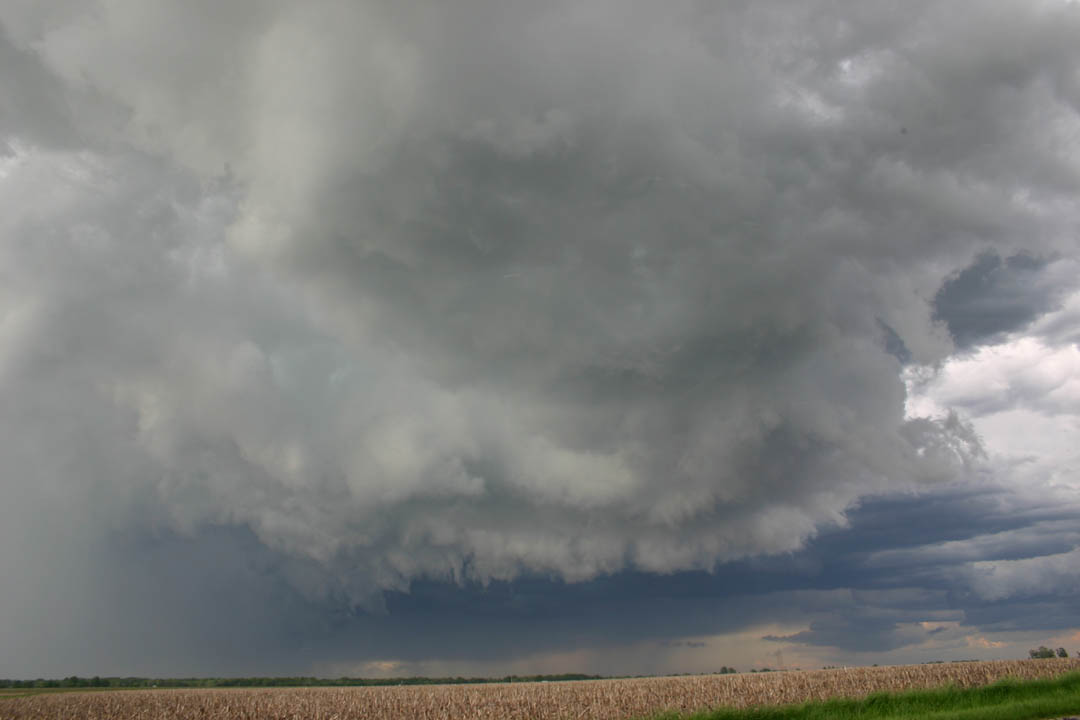 Looking north toward Bunker Hill from between Meadowbrook and Hamel 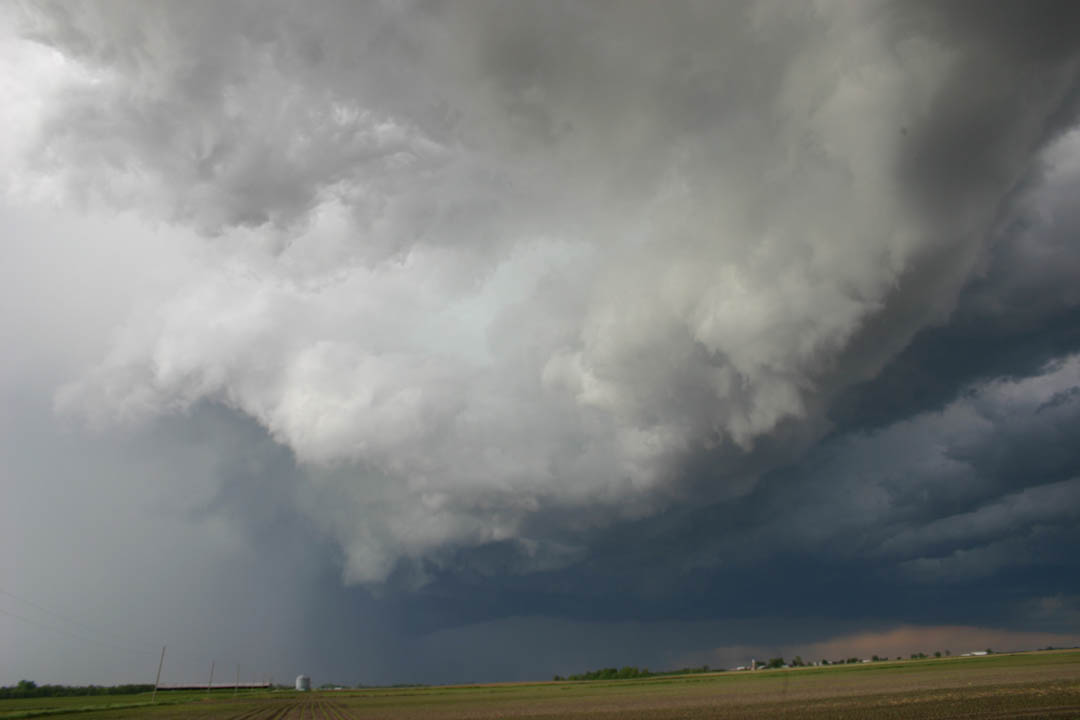 Looking north from route 140 - not sure of exact location, maybe between Hamel and Alhambra

Another picture from the same spot as the one above, looking to the northeast instead of the north, shows the RFD gust front which was maybe a mile or so ahead of me. As noted above, I finally caught up with it just east of Alhambra; this picture shows the meso to my north and the RFD gust front above it in the picture, extending southward toward me. I was just ahead of it when this picture was taken. Here is another picture a few minutes later and a little farther east, when I was a little more ahead of it. During the time I was in the Hamel and Alhambra areas, I noticed on radar that the storm had sent a very pronounced gust front/outflow boundary southeast and southward across the central and eastern part of the metro area. Again, you can see this on the radar loop linked at the end of this report. I could see at one point that the gust front had just passed through the Edwardsville area; and indeed when I got home from the chase my wife mentioned a "big wind from the north" around 5:30 p.m.

As I was driving east between Alhambra and Greenville, I noticed a small narrow lowering that began to rotate. I tried unsuccessfully to get video of it; pushed the wrong button, I guess - but the rotation in any case lasted less than a minute. Then, a mile or two farther east, this appeared, a bit farther to the north and I think quite evidently right under the meso: 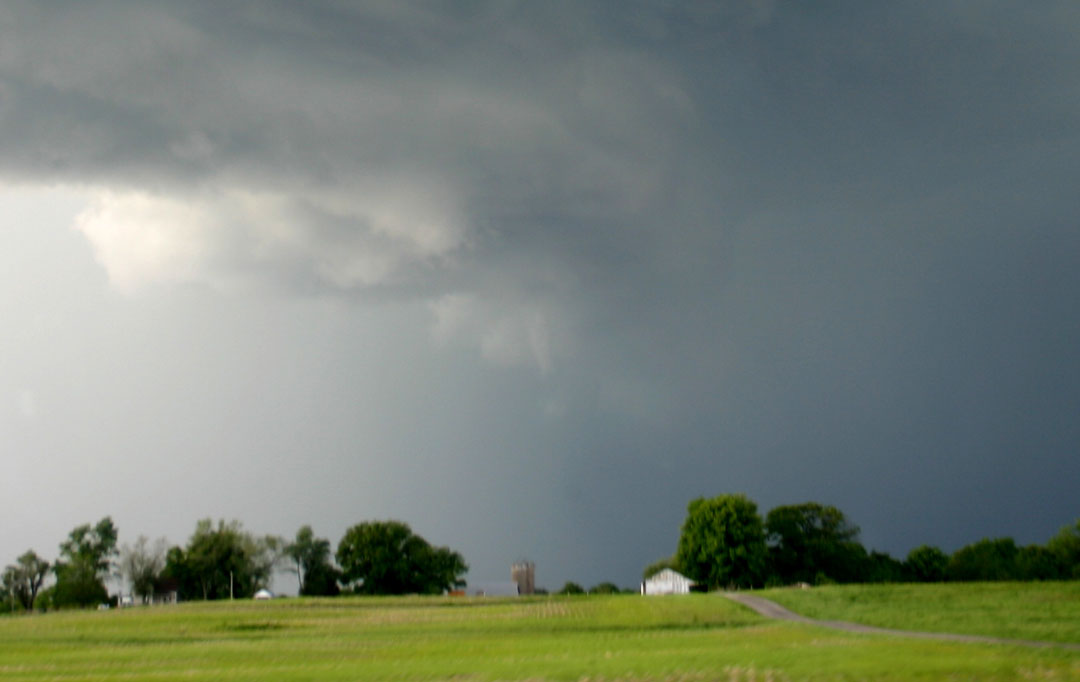 This picture was taken out the window as I was driving - note the narrow lowering right in the middle of the picture. A more zoomed and enhanced version of this picture can be seen here. This feature lasted only about 30 seconds - not sure if it was a funnel, but it looked like it and was sure in the right place. This would have been a little into Bond County, around the time of the 1-inch hail report in Sorento, which is about 7 miles north of route 140. I did later note a public report of a brief funnel in the same general area on a TV station blog, for what that's worth.

EDIT May 4, 2:30 p.m. - After reading Dan Robinson's chase report (linked below) and seeing his video, I am quite sure that the feature pictured above is the same funnel cloud that he saw and videotaped from a closer location. As Dan indicates, this funnel (and probably the other two suspicious features I saw in this area) likely resulted from the storm crossing the outflow boundary in this area, discussed in the second-last paragraph below. The boundary had the temporary effect of increasing the potential for low-level rotation as the storm moved over it, even though the ultimate result was that the storm weakened once it moved into the more-stable air east of the boundary. The northeast-southwest orientation of the boundary would also explain why, as the storm moved east, each of the three suspicious features I saw, including this funnel, which was the middle one of the three, was a little farther north than the previous one.

A little farther down the road, I saw a third suspicious lowering, but it was not as narrow and tight as this one, and quicky disappeared in the wrapping precipitation. I turned north briefly when I got to route 127 to look at the storm, but realized that again if I stopped for any length of time, the storm would get away from me. I continued east and a little south through Greenville, then east on route 40 toward Mulberry Grove. But this route (and I-70, which parallels it) heads a bit north of due east, and the gust front behind me was now filling in with new precip, so soon the chase was over. Any farther east, I'm in the core with potential large hail and no visibility of the storm structure. So I turned back toward Greenville, stopping for a while in sunshine and pouring rain to get a couple pictures of the double rainbow that had formed: 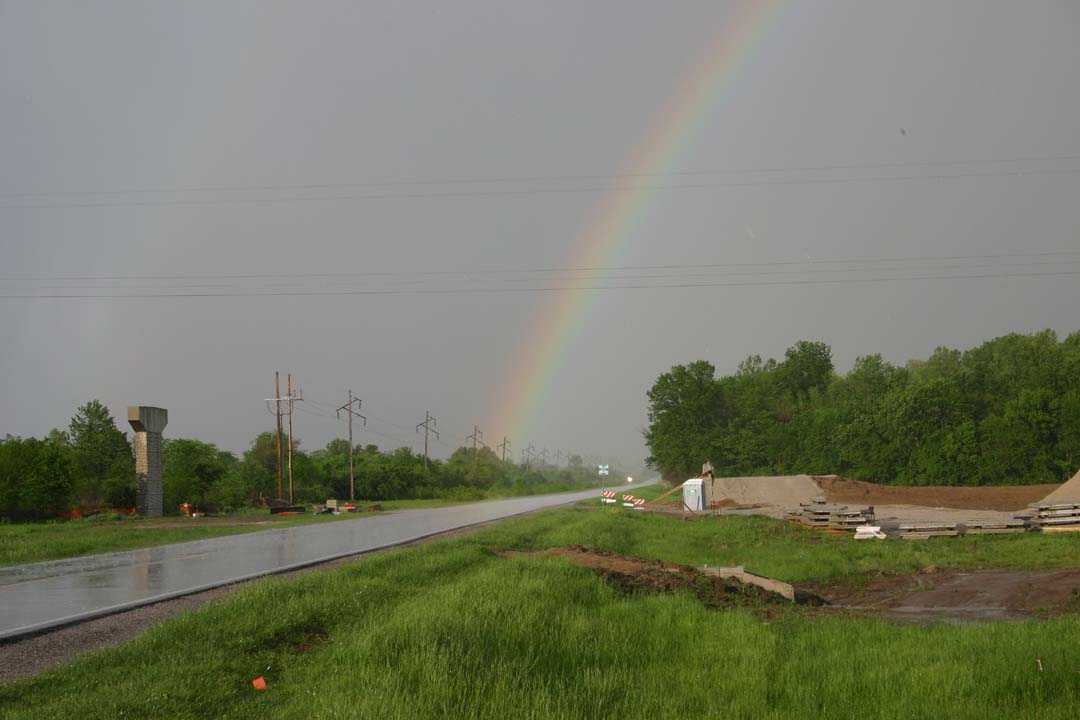 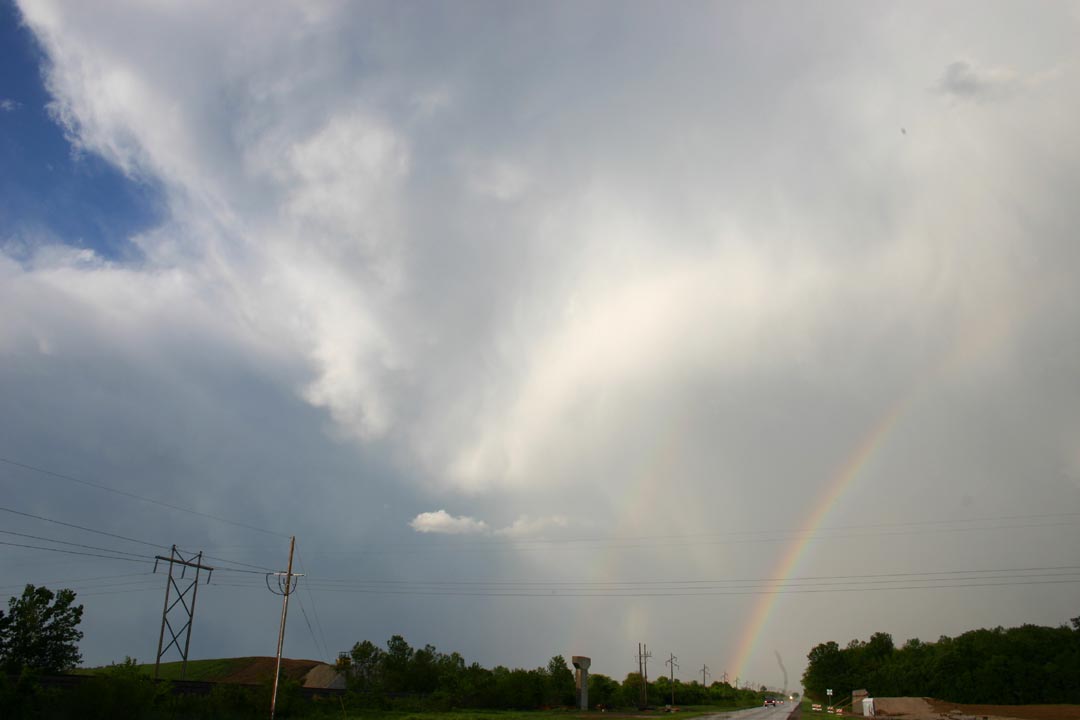 By now, it was about 6:30, and the storm was becoming more linear and weaker, though it did produce some damage in Fayette County around 6:45. As can be seen in the radar loop below and as was predicted by SPC in their final mesoscale discussion for this day's severe thunderstorm watch, the storm weakened rather quickly after it crossed an outflow boundary from the storms to the southeast, and moved into air that had been stabilized by the earlier storms.

With the lower than usual dewpoint for severe weather days in our area today, the storms were a little higher based and the air much clearer than usual - giving the storm a photogenic look similar to a Great Plains storm. A real treat, even with a storm that had little to no chance of producing a tornado, despite its obvious supercell nature (and its production of one or more brief funnel clouds), due to the wide temperature-dew point spread and high-based nature of the storm.

A radar loop showing the storm during the time I chased it can be seen here.

A list of the local storm reports from this storm can be seen here.

A Web page from the National Weather Service on this storm, including additional pictures, can be seen here.

Reports on his storm from other storm chasers:

Charles Edwards Hail video. (Date listed is incorrect, should be May 3).