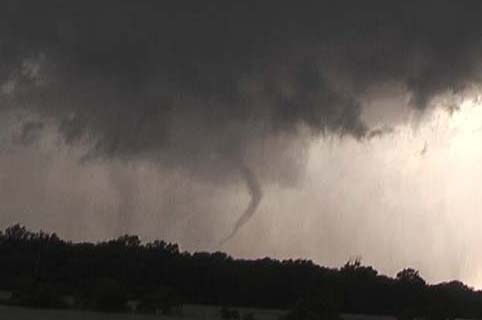 September 26, Virga Illuminated by the Setting Sun - The setting sun produces a spectacular scene as it illuminates virga (precipitation nor reaching the ground) near Velarde, NM. Includes photos and brief discussion

August 13, Storms in and near Macoupin County, IL - As a diffuse cold front moves across Illinois, I observe three of the most photogenic storms I have seen in 2011. Includes regular and panorama photos and discussion.

July 15, Pyrocumulus With Las Conchas Fire, NM - Although by this time the fire was much more contained, hot, dry weather made the fire hot and smoky along its southwestern perimeter, leading to the formation of a spectacular pyrocumulus cloud. Includes photos and discussion.

June 28, Las Conchas Fire, NM - I get daytime and nighttime pictures of the massive Las Conchas fire as it threatened Los Alamos and the Los Alamos National Laboratory.

June 21, Southern IL Hail and Bow Echo - I encounter hail and high wind along I-64 in the early stages of a severe thunderstorm complex that creates widespread severe weather across southern and eastern Illinois. Includes photos and a video capture.

June 14, Northern MO Bust - An extreme combination of instability and wind shear sets up along a warm front in MO, but a capping inversion prevents sustained strong storms until after dark.

June 9, Shelbina to Hannibal, MO Supercell and Microburst - I stay just ahead of a supercell and get dramatic video of the storm as it intensifies and produces major wind damage on the west and south fringes of Hannibal. This damage was the result of a microburst that produced winds that may have been 100 mph - just as my camera was rolling! Report includes photos, video captures, video, and local storm reports.

May 28, Illinois, Supercell with giant hail - I intercept an elevated but intense supercell that produced a hail path all the way across Illinois, and some of Missouri and Indiana, too. The biggest hail was 4.5 inches in diameter near Litchfield and Irving, IL. I made sure to stay out of this storm's path, but did get some nice pics of its photogenic structure. Report includes a panorama photo and a radar image.

May 25, eastern Arkansas - At least three tornadoes, and possibly four - I gain redemption from the previous day in Oklahoma by intercepting a tornado near Augusta, one definite and one possible tornado, both nicely backlit, near Greasy Corner, and a rotating lowering over West Memphis that has also now been confirmed as a tornado. Report includes pictures and video of the tornadoes and of associated storm features, and radar images of the storms. New information and pictures added 6/3/11 and 6/4/11.

May 23, Missouri and Oklahoma - Mostly a travel day, but I intercept a bow echo with high wind and hail near Union, MO and additional storms in SW MO and central OK, including an Oklahoma storm that was tornado-warned - until I got to it. Includes pictures and video of the Union storm, with both time lapse of the approaching storm and real-time video of the rain, wind, and hail. Also a mammatus picture from OK.

May 22, 3 supercells between Hermann and Warrenton, MO - I intercept three supercells, two with tornado warnings and one with a severe thunderstorm warning, near Treloar, MO, which is south of Warrenton and east of Hermann. All three storms produced large hail but no tornadoes. Despite the lack of tornadoes, I do manage to get photogenic wall clouds and storm structure with the first two storms. Report includes photos and video captures.

May 12, Southwest Missouri Tornado-Warned Supercell - I follow a photogenic, tornado-warned supercell from Stockton Lake to Lake of the Ozarks, as the storm produces a funnel cloud, spectacular storm structure, ground-hugging wall clouds, and golfball and larger hail in many locations. Includes photos, video captures, meteorological analysis, two video clips, and a radar image.

April 28, Cold-Core Storms with Secondary Cold Front, Edwardsville, IL - On the day after the deadliest tornado outbreak in 75 years, here's proof you don't need to have death and destruction in order to get beautiful storms. Storms, rain and wind squalls, and showers developed in the St. Louis area along a secondary cold front associated with the same weather system that produced the tornadoes, and some of them were among the most beautiful storms I have ever photographed.

April 19, Supercells in Western, Central, and Southwest Illinois - A poor decision to enter an area with a limited road network causes me to miss the opportunity to document spectacular tornadoes in Illinois. I settle for a couple impressive supercells, some decent hail video, and perhaps a brief, distant view through the rain of one of the tornadoes. And I do a LOT of driving in torrential rain and hail. Includes pictures, video of hail and a couple mesocyclones, and radar images.

April 15, SVR and TOR-Warned Storms, Southwest Illinois - I observe, from the Illinois side of the Mississippi River, a severe storm that moved north-northeast through the St. Louis metropolitan area, then another storm that became tornado-warned as it intensified near Swansea, IL and passed just southeast of Edwardsville. Includes photos, video captures, radar images, and meteorological analysis of the day's severe weather setup.

Make a donation to the American Red Cross Disaster Relief Fund - Tornadoes, floods, wildfires, and other diasters have caused historic levels of death and destruction this year. Please make a contribution to the Red Cross disaster fund if you can. Thanks!

List of Tornado Tracks from April 26-28 Record Tornado Outbreak - I have compiled a list of tornadoes officially confirmed by National Weather Service damage surveys, with information on several aspects of each tornado in this record outbreak.

I am pleased to announce the availability of my 2011 storm observation highlights video Stormy Skies 2011. A short trailer for the video and additional information can be found here.

I am also pleased to announce the availability of my new 2012 weather calendar - the Stormy Skies 2012 Weather Calendar. You can preview and order the calendar here.