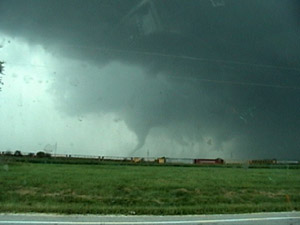 August 19, 2009, near Roodhouse and Manchester, IL - I observe and videotape a tornado northwest of Roodhouse, which goes on to cause significant damage in Manchester. Includes photos, video, and local storm reports.

July 28, 2009, near Watrous NM - I catch a photogenic SVR-warned storm, and get some daytime lightning photos.

July 12, 2009, Southwest Illinois - I photograph a spectacular shelf cloud as a bow-echo MCS crosses the Mississippi River from Missouri into Illinois. Includes photos and radar images.

June 19, 2009, Central Illinois - I observe severe storms, at times with supercell characteristics, near Peoria and Bloomington-Normal - but am playing catch-up from the northwest and have a hard time getting into the best position to view some of the storms. Includes photos and local storm reports.


June 10, 2009, Edwardsville Illinois area - A tornado watch is issued for the St. Louis area, but there is not a lot of severe weather. Instead, the main feature is a spectacular nighttime lightning show, along with some decent storm structure. Includes photos and video captures.

June 8, 2009, Southwest Illinois - I have an accidental encounter with a soon-to-be tornadic supercell, encountering a wall cloud and quarter-sized hail near Glen Carbon, IL, then more hail a little later at home. Includes radar loops and images and link to NWS tornado damage survey.

Memorial Day Weekend in New Mexico - I observe interesting weather in New Mexico on several days over the course of about a week centered on Memorial Day weekend. Especially interesting days were May 23 (strong thunderstorms and a small, ropy funnel cloud between Albuquerque and Santa Fe), May 24 (a spectacular evening lightning display over Santa Fe), and May 27 (massive hail accumulation in Las Vegas, NM). More info on these events and others during this period, along with the unusual weather pattern that produced them here.

May 7, 2009, near Milan, MO - I get on a strong storm in north-central MO, but miss the only tornado of the day by 30 miles. Includes photos and radar images.

April 23, 2009, West-Central IL - I get some good storm structure pictures as a couple strong storms move through the Macomb, IL area ahead of a meso-low and warm front. Includes photos.

April 20, 2009, Edwardsville, IL - I get some nice photos near sunset of showers and thunderstorms, that developed in the cold northwesterly flow as an upper-air disturbance rotated around a strong low over the Great Lakes. Nice rainbows, too!