You've all heard the expression "If you don't like the weather, wait 5 minutes." That was never truer than in New Mexico on Sunday, March 7, as a strong storm system approached from Arizona. In the course of 12 hours, I observed the following:

Snow
Graupel (snow pellets)
Dense fog, with visibility down to about 100 feet (in the mountains, as cloud bases lowered)
Bright sunshine
A "snowbow"
Rain
Two thunderstorms
Three brief hailstorms (all pea or smaller)

The first six weather phenomena were all observed while I was skiing at the Pajarito Ski Area (altitude from about 8,900 to 10,300 feet above sea level) in the Jemez Mountains above Los Alamos. The last two were in Santa Fe through the course of the same evening.

When I arrived at Pajarito around 10:40 a.m., it was snowing. By the time I bought my lift ticket and got my boots and skis on and headed out to ski (about 11 a.m.), about an inch of new snow and graupel had fallen (which definitely helped the ski conditions). When that stopped, the cloud base was around 10,000, near the top of the mountain. But within 15 minutes or so, it quickly lowered, and enshrouded the entire ski area, including the base area, in dense fog. At times the fog was so thick you could only see two chairs ahead on the chairlift, meaning the visibility was down to 100 feet or less. Around 1 p.m., it began to snow again, with snow and graupel (snow pellets) coming down quite heavily for a while - but by an hour later, this band of snow showers had moved north and the sun was brightly shining. Here is a picture of the band of mountain snow showers and valley rain showers as it continued to the north: 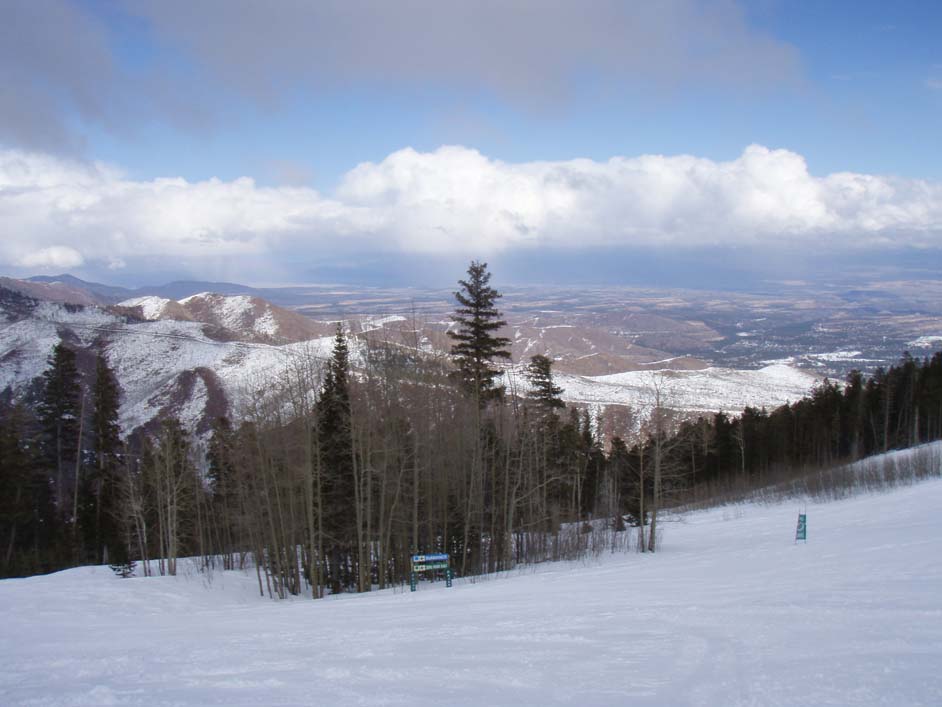 As this band continued north, I observed the rare phenomenon of a "snowbow" - a rainbow in an area of falling snow. This occurs as the snow mixes with rain, producing a rainbow - except that there is also snow occuring in the same area. You can see it just below the cloud base, just left of center in this picture: 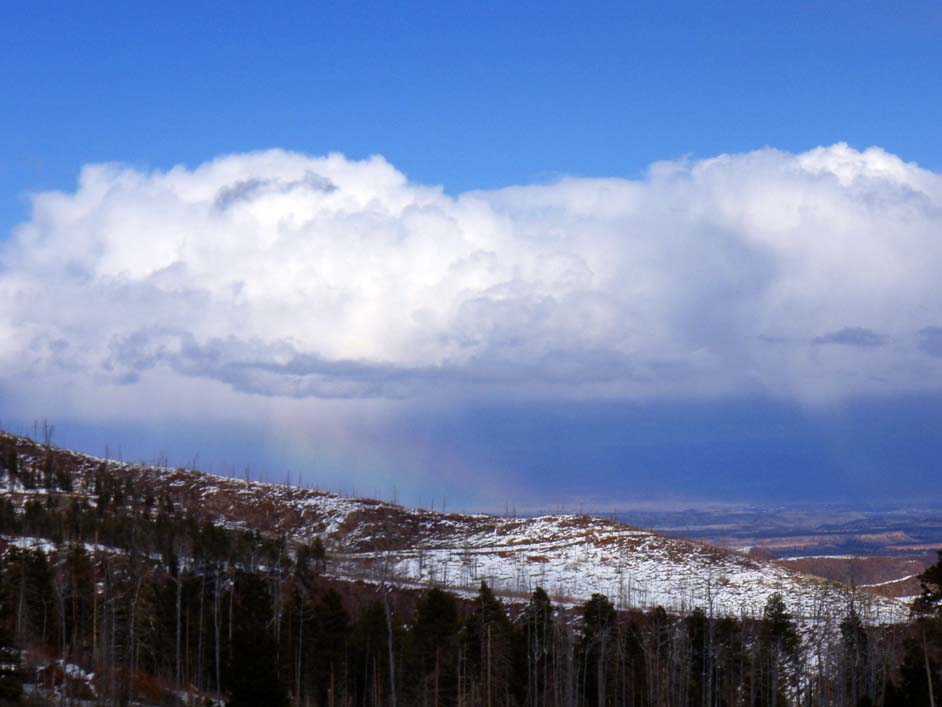 Soon after this, it clouded over again and more snow showers moved in. Just as I was leaving the ski area, however, the snow mixed with and changed to rain at the bottom of the ski area, as warm air advection raised the snow level to around 9,000 feet.

The weather remained unsettled and stormy through the evening, after I returned to Santa Fe. There I observed two thunderstorms and multiple brief bursts of hail, as well as a lot of rain. The first thunderstorm passed just to the east of Santa Fe around 6 p.m. as it moved from the south-southwest up into the Sangre de Cristo Mountains. Here is a picture of this thunderstorm as it was located a few miles southeast of Santa Fe: 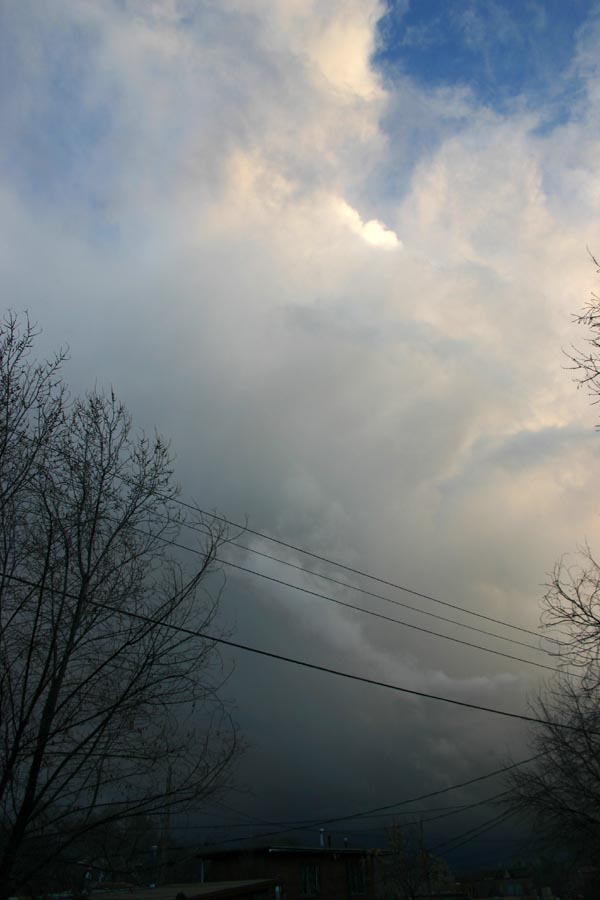 At this time, thunder was frequent and I observed quite a bit of lighting, including some CG (cloud-to-ground). Several heavy convective showers, a couple with brief bursts of hail, and another thunderstorm with frequent lighting and another brief burst of hail (this one around 9:30 p.m.), followed through the course of the evening. This second thunderstorm hit Santa Fe more directly than the first one, but the heavist part of this storm also passed just southeast of the city. These storms were interesting in that they produced a wide variety of precipitation - rain and hail in the lower elevations, along with very heavy snow in the higher elevations. Both the Santa Fe ski area and the Santa Fe snow telemetry site in the mountains above Santa Fe received nine inches of snow through the evening and overnight, much of which was associated with the two strong thunderstorms. It's not too often you see this wide a variety of weather in one period of about 12 hours!

Also noteworthy - elsewhere in New Mexico, the thunderstorms were actually severe. In carlsbad, a storm produced golfball size hail, and a number of SVR warnings were issued by both the Albuquerque National Weather Service office and the Midland-Odessa, TX office which serves southeast New Mexico.