Driving to Buena Vista, CO from Denverfor some skiing after Chasercon, I was treated to some very interesting displays of convection and vorticity, winter style. A series of storm systems moving across the Rockies, combined with the orographic influence of the mountains, made for some very interesting weather - mountain-enhanced snow squalls along the high ridges, and snow devils - whirlwinds lifting snow - in places where the wind patterns were right, particularly in the valleys right below the lee side of the mountains.

I observed the snow devils in the video embedded below about 8-10 miles southwest of Fairplay, CO along U.S. route 285. I started noticing plumes of snow rising into the air when I was still 5 miles away, so when I got close to where I had seen them, I stopped. I wasn't disappointed - kind of like a gustnado fest, except that it was snow.

The snow devils were forming near the base of the mountains on a high plateau, just on the leeward side of the mountains. This occurred as strong westerly winds coming over the mountains rushed down valleys and canyons and converged at the bottom in a way that produced vorticity. Here is the video I managed to catch with my automatic camera, which was the only video-capable device I happened to have:

As you can see, the wind in the area was quite strong, and it also produced some large snow plumes. But repeatedly in this same area, there was just enough convergence of wind coming down the mountains from slightly different directions to produce vorticity and create whirlwinds that lifted the snow, quite high at times.

The combination of wind with the orographic influence of the mountains also produced some rather intense and at times quite photogenic convective snow squalls. Here is a picture looking east from the summit of Kenosha Pass (10,000 feet above sea level): 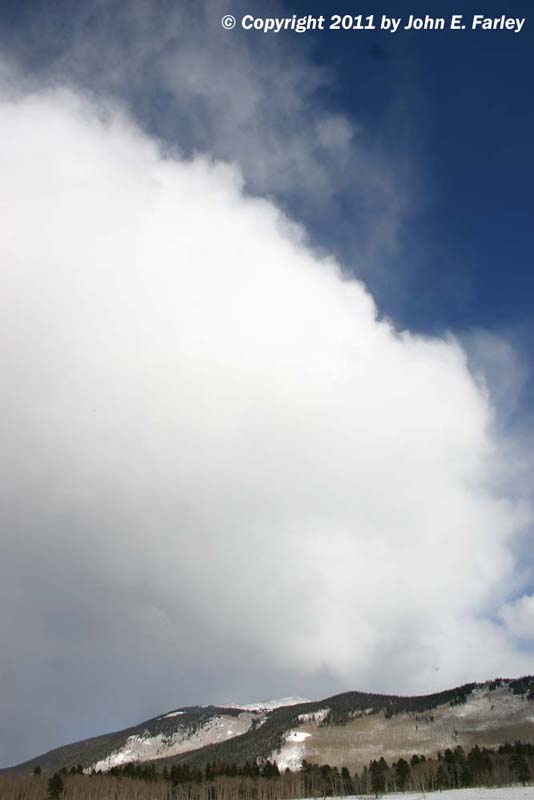 This one is looking west toward the Collegiate Range, from the ridge just above Buena Vista: 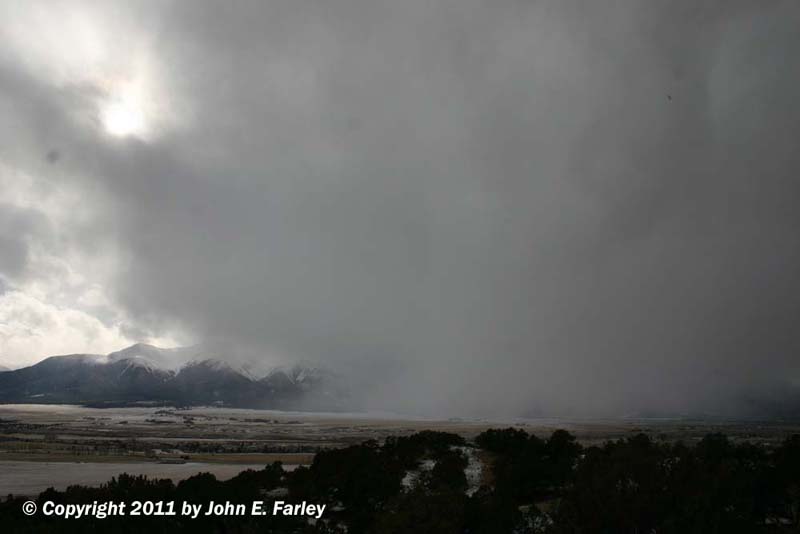 Much of the high country has received more than a foot of snow over the past 2-3 days, and for most of the mountains above 9,000 feet, the winter storm warnings or winter weather advisories that were scheduled to end this afternoon (2/20/11) have been extended through the evening or overnight, as mountaintop convection will likely continue to produce additional snow.

The following picture probably shows best how the orographic influence of the mountains interacted with the passing strom system to produce the snow squalls today. The air was somewhat unstable due to the influence of the storm system, and the winds associated with the system were very strong westerlies, with surface gusts of 40 mph or more reported across much of Colorado. In air destabilized by the storm system, the winds were forced dramatically upward when they hit the west slopes of the mountain ranges, producing convection along the ridgelines. The process can be seen in this picture, taken looking northwest from Buena Vista around 3:30 p.m.: 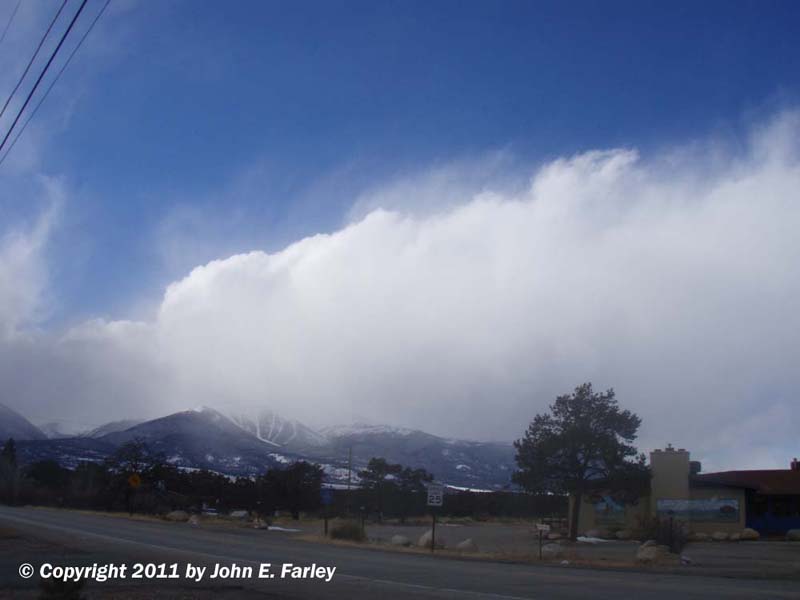 Colorado never disappoints! I have seen interesting weather nearly every time I have traveled to Denver for Chasercon, but today was the best yet. Better, in fact, than a lot of chases I have been on! And with the snow continuing to fall in the high country until around midnight, the ski conditions will be excellent, too!