Although long-range weather forecasts, such as the 3-month seasonal forecasts that are issued for winter, spring, summer, and fall, are notably less reliable than short-range forecasts, they usually don't go as totally wrong as the forecasts for the winter of 2011-12 did. Below are first for temperature, then for precipitation, comparisons of what actually happened to what was forecast. I included both the official NWS forecasts and the winter forecast from Accuweather, although the latter combined temperature and precipitation in its forecasts, so the same map is compared to what actually happened for both temperature and precipitation. After the graphic comparisons, I'll briefly discuss how the forecast compared to the actual winter pattern. 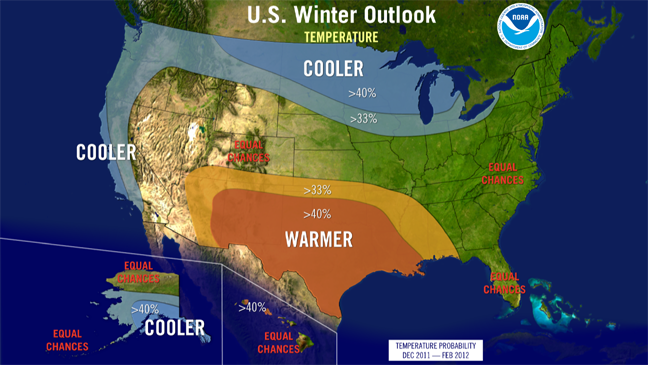 Looking at the temperature maps, it is clear that the official NWS forecast got very little right. There were pockets of cooler-than-normal along the Pacific Coast, which was forecast to be cool; and LA, AR, AL, and east TX were, as predicted, warmer than normal. But just about everything else was wrong. As would usually be expected in a La Nina winter, which this was, the Great Lakes west to Montana were predicted to be colder than normal. Instead, they were much warmer than normal. Meanwhile, New Mexico, predicted to be much warmer than normal, was the only state that, overall, was cooler than normal, though only slightly so. The very warm weather also covered the mid-Atlantic and Northeast regions, which were considered to have an equal chance of above or below normal temperatures, with a record warmest winter in the Hudson Valley. Except for Florida, the Accuweather forecast fared no better, with "Worst of winter cold and snow" predicted for the Great Lakes and Upper Midwest, which turned out to be much above normal. The Northeast, predicted to be "stormy and cold", was much above normal, with, as noted, a record warm winter in part of this area. Meanwhile, like the NWS forecast, the Accuweather forecast had the southwest "Mild and Dry," when it turned out that was the location of the only state that had below normal winter temperatures. 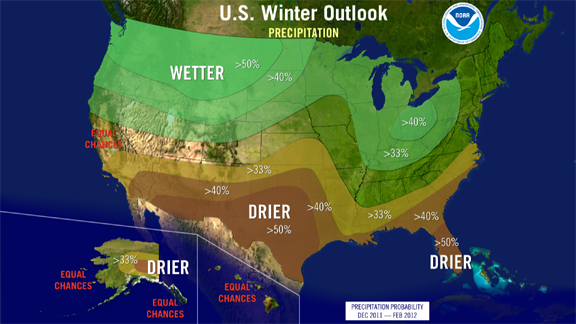 So what, besides the inherent difficulty of long-range forecasts, seems to have gone wrong? The big culprit likely is the Artic Oscillation. Normally with a La Nina winter, you get cold, wet weather compared to normal in the northern U.S. and warm, dry weather compared to normal in the southern U.S. This is what the forecast reflected, and it is what happened the previous winter, 2010-11, also a La Nina winter. But this year, that usual La Nina pattern seems to have been trumped by a positive phase in the Arctic Oscillation (AO), which resulted in warmer and drier weather in much of the country, especially across the northern third except for part of the Midwest, which was also warmer than usual but also wet. Generally, a negative phase of the AO favors cold weather in the United States, whereas a positive phase keeps the cold air locked up farther north, as happened this winter. You can read more about the Arctic Oscillation here.

Interestingly, the month of March - counted climatologically as spring, not winter, looked much more like a La Nina winter pattern in the southern third of the country, which became quite warm and dry after the violent storms of early March, and in the northwest, which finally got the cold, wet pattern usually associated with La Nina. But in March, the warm, dry pattern well-established through the winter persisted across the north central and northeast parts of the country, to the point that much of the northeast was experiencing major wildfire problems by mid-April.