Thundersnow in and Around Wolf Creek Pass, Colorado
September 30, 2017


My plans for the day were to head up to Wolf Creek Ski Area from Pagosa Springs to get my season ski pass, hoping to maybe also get some thundersnow, since condtions would be quite favorable for that at some point during the day. A trough had been camped out over the Great Basin for several days, sending one moisture-rich impulse after another up and over New Mexico and southern Colorado. One final impulse would surge through the area early this day. Each impulse had brought widespread showers and thunderstorms and some high-mountain snow, and this one looked to perhaps be the wettest of the bunch. My original plan was to leave at 10 a.m. after College Gameday and try to get back by 2:00 p.m. in time to watch the Michigan State football game. But with rapidly darkening skies and frequent thunder in Pagosa by 9:30, I knew it was time to go, so out I went. The plan was to drive up to Wolf Creek Pass, pretty much in the storm, as it moved northeast from town up into the pass. That pretty well worked out. As I got to route 160, I could see updraft base in the southeast ahead of the NE-SW alligned thunderstorms, which were moving northeast (and which I was in, with at-times torrential rain, near the leading edge of the line of storms). I figured this could be a heavy and long-lasting precipitation event and would impact the mountains around Wolf Creek Pass as well as town, hopefully with thundersnow up there, as the temperature looked to be cold enough for snow somewhere above around 10,000 to 11,00 feet above sea level.

The storm did not wait for me to get to the mountains to make a big impression. As I drove through downtown Pagosa Springs around 9:45, a brilliant flash of CG lightning zapped down about two blocks to my north - the crash of thunder was almost instant after the flash! Four more of these hit as close or nearly as close as I continued through the east end of town and out of town toward Wolf Creek Pass. All in about five minutes or so, and all within a quarter mile - some much closer. Rain, at times torrential, poured down with the temperature around 49 or 50. Several more close CGs hit as I made my way up to the pass, but the frequency of them was less than in and near town. Wet snowflakes intermittently mixed in with the rain from a little below the Scenic Overlook on up to Wolf Creek Pass, with the temperature gradually falling from 46 below the overlook to 37 at the pass. However, it still was a mixture of rain and snow in the pass, so I headed up higher toward the Lobo Overlook. I wasn't sure if this Forest Service road would still be open after 6-8+ inches of snow at the top the past few days, but it was. I stopped once it was all snow (around 10:20 a.m.), after passing some panicky guy backing down the road because he was freaked out by the snow. The first 3/4 of the video that is embedded below is from this location (a little above 11,000 feet above sea level) during this initial wave of thundersnow. At least one flash of lightning was within 1/4 mile. The snow was granular at first but later transitioned to softer flakes. The thunder gradually became more distant as the snow diminished to flurries by around 10:45. It started to pick up again a few minutes later, but there was no thunder so I headed to Wolf Creek Ski Area where I was buying my season ski pass. Now (around 11 a.m.) it was snow all the way down to the pass and on down to the Wolf Creek Ski Area (elevation 10,600 feet at the lodge), so the snow level had lowered quite a bit from what it was when I arrived. As the snow pulled down the colder air, the temperature in the pass had also fallen to 33.

While I was buying my ski pass (between 11:00 and 11:30 a.m.) thunder and lightning began again, with 3 flashes of lightning followed quickly by thunder with again rather granular snow at first, transitioning again to softer flakes. No video of this second wave of thundersnow because I was busy getting my season pass. When I was finished with that the snow was coming down hard and accumulating, so I got the video camera back out hoping for more lightning and thunder, but there was no more. Here, though, is a picture of the heavily-falling snow at the base of the ski area a little after 11:30: 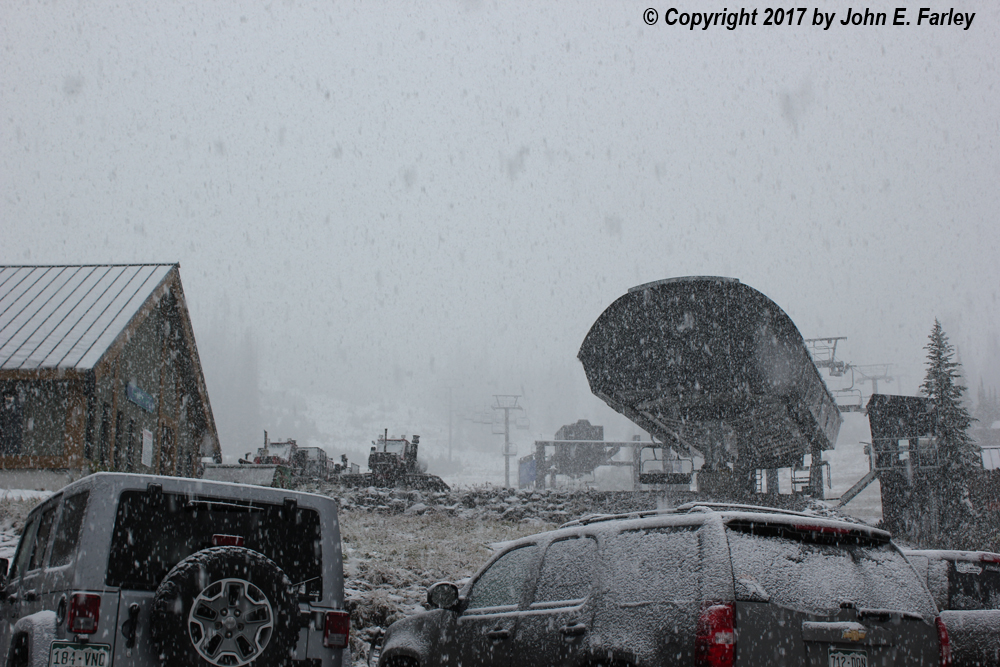 This is what any skier loves to see when heading up to the ski area in September to buy a season pass! After this, I headed back up to Wolf Creek Pass, elevation 10,856, to watch the storm a little more and see if I could get any more thundersnow video.

I stopped there for a while as the snow again lightened up. By now, quite a bit had accumulated, and the trees were pretty with the fresh snow: 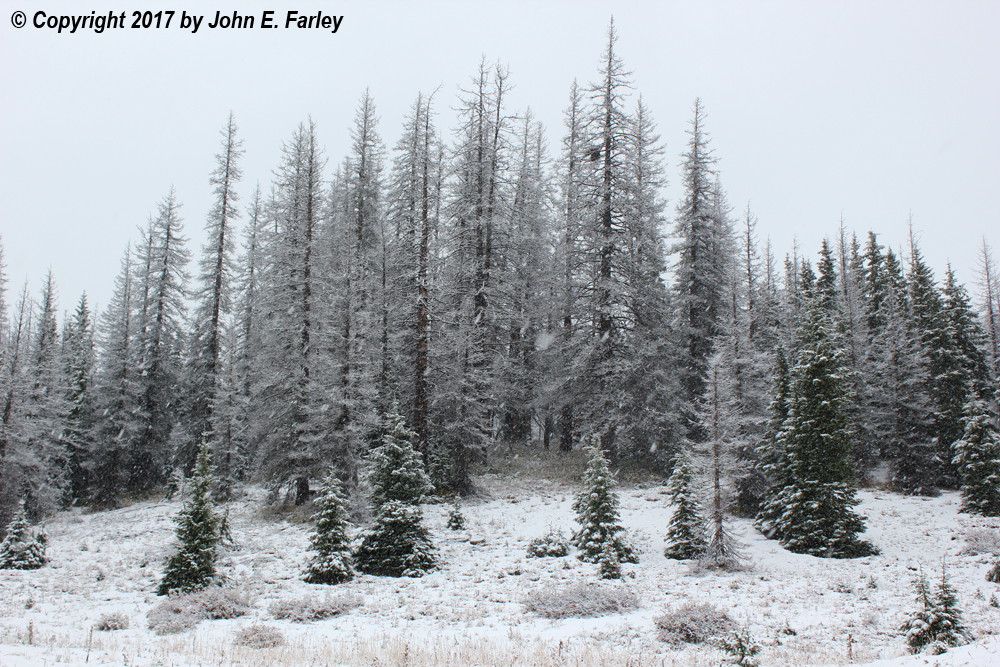 The sky briefly brightened but soon I could see dark updraft base and what looked like the leading edge of another storm coming up from the southwest: 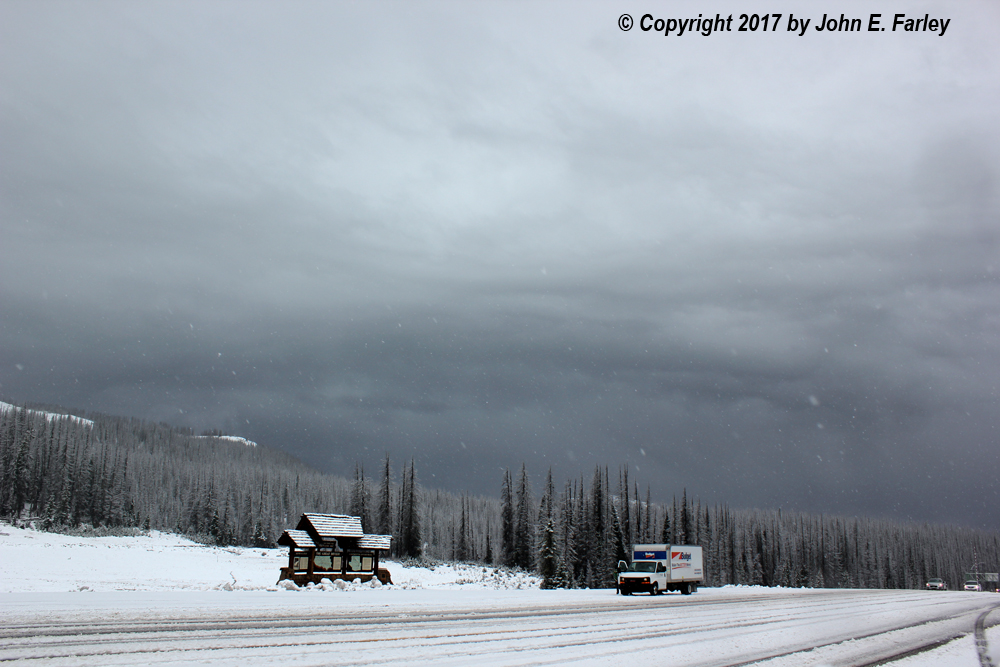 Note also that enough fresh snow has accumulated that the road is now snow-covered. The reaction of the many tourists going over the pass seemed to range from fascination to terror. Lots were stopped taking pictues or video, while others crawled along very slowly and some guy pulling a trailer even tried to back up on the shoulder, which got him a visit from the Colorado State Patrol. As this approaching storm cell got closer, I saw a diffuse flash of lightning under the cloud base which was quickly followed by thunder, so I repositioned to where there was less road noise and in a position where less snow would blow into the car, and started to video again. Once again I rather quickly got some loud thunder with big, soft snowflakes coming down. This is in the final segment of the video.

Here is my video of the thundersnow:

Again, the first 3 minutes or so of the 4-minute video are from the road up to the Lobo Overlook and are from the first of the three waves of thundersnow, while the last minute or so is from Wolf Creek Pass in the third wave of thundersnow. So, to summarize, three waves of thundersnow between about 10 a.m. and noon. By the time I started down around 12:10 p.m., around 1.3 inches of fresh snow had fallen at the pass level (with more at higher elevations), and the snow was still coming down hard. Here are two more pictures - the first during heavy snow in the pass associated with the third cell that came through; the second is of some fall color with peaks with fresh snow in the background as I headed down, taken from just below the Scenic Overlook: 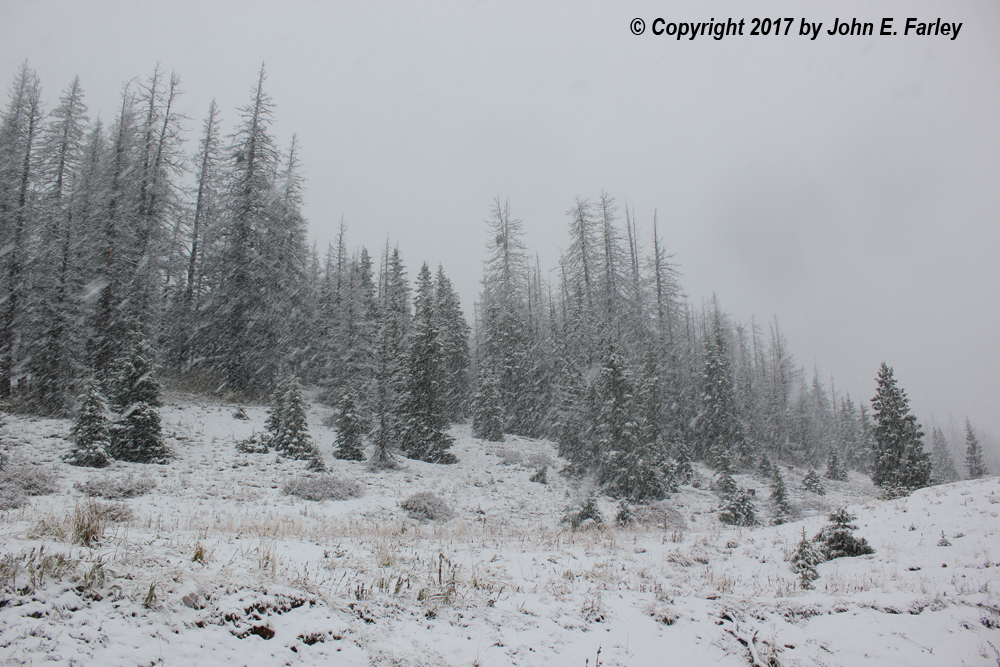 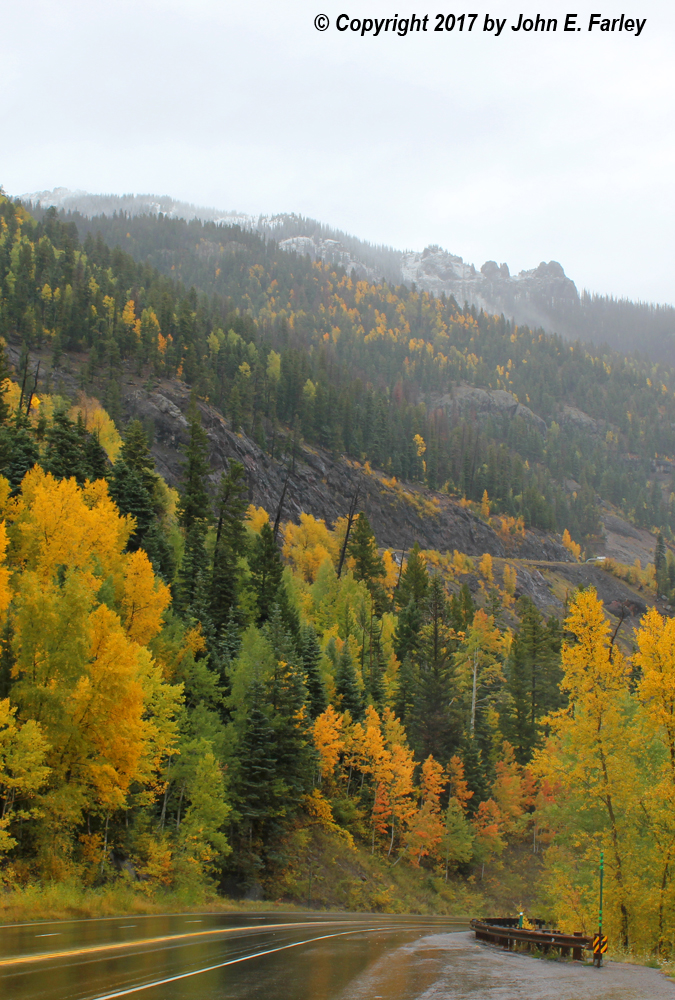 All in all, this did indeed turn out to be a very wild day of weather in CO and NM. Besides the thundersnow in the mountains and the intense barrage of CG lightning in the morning in Pagosa Springs, there was also a tornado west of Albuquerque near I-40 a little before 3:00 p.m., hail in a number of places in CO and NM during the day, a lightning bolt around 2:00 p.m. that took out the Colorado State Patrol radio tower southwest of Pagosa Springs, and a flash flood emergency around Belen and Los Lunas just south of Albuquerque in the evening. Cumulative 5-day rainfall totals from this system exceeded 5 inches in parts of New Mexico, and many places in New Mexico and southern Colorado got more rain from this one system than in the entire previous period of this year's southwest monsoon.