May 3 Thundersnow, West Side of Wolf Creek Pass, Colorado

I caught some late-season thundersnow the afternoon of May 3 at the scenic overlook on the west side of Wolf Creek Pass, and, later, also in the valley below, a couple miles SW of Treasure Falls.

I was watching the weather closely, knowing the day had good thundersnow potential in the mountains as a cold upper low moved east near the CO-NM state line. Already by mid-morning the lightning tracker was showing lightning in many areas, although nowhere immediately near the Pagosa Springs/Wolf Creek area. But wtih steep lapse rates and decent forcing, thunderstorms would be widespread, and above about 9,000 feet above sea level, the p-type would be mainly snow. And possibly lower than that at times in the heavier bursts of precipitation. Also for a change, moisture was decent with this system, suggesting the potential for much-needed significant wetting precipitation across southern Colorado and northern New Mexico.

By around 11:00 a.m., I could see that heavier showers were forming in the Pagosa area, and we had one brief burst of very heavy rain at our house. Seemed like time to head up into the mountains. By around 11:15, as I headed out of town, thundersnow was likely occurring in the South San Juan Wilderness, as the lightning tracker was showing a few strikes there. I was hopeful that this would move northeast to the area around Wolf Creek Pass where I could intercept it. I made a brief stop at the scenic overlook on the west side of Wolf Creek Pass, a location to which I would return multiple times and eventually have success. But at this point, it looked like the precipitation was to the south, moving northeast toward the pass. It was uncertain if this motion would continue, though - as the low pressure passed by just to the south, movement would likely change with the circulation around the low pressure center. I arrived at Wolf Creek Ski Area around noon and stayed there for about a half hour. A steady snow was falling, mainly from the stratiform portion of the storm, whose heaviest part was still well to my south over the South San Juans - too far away for me to get any thunder at this location. Here is a picture I took there with the snow coming down: 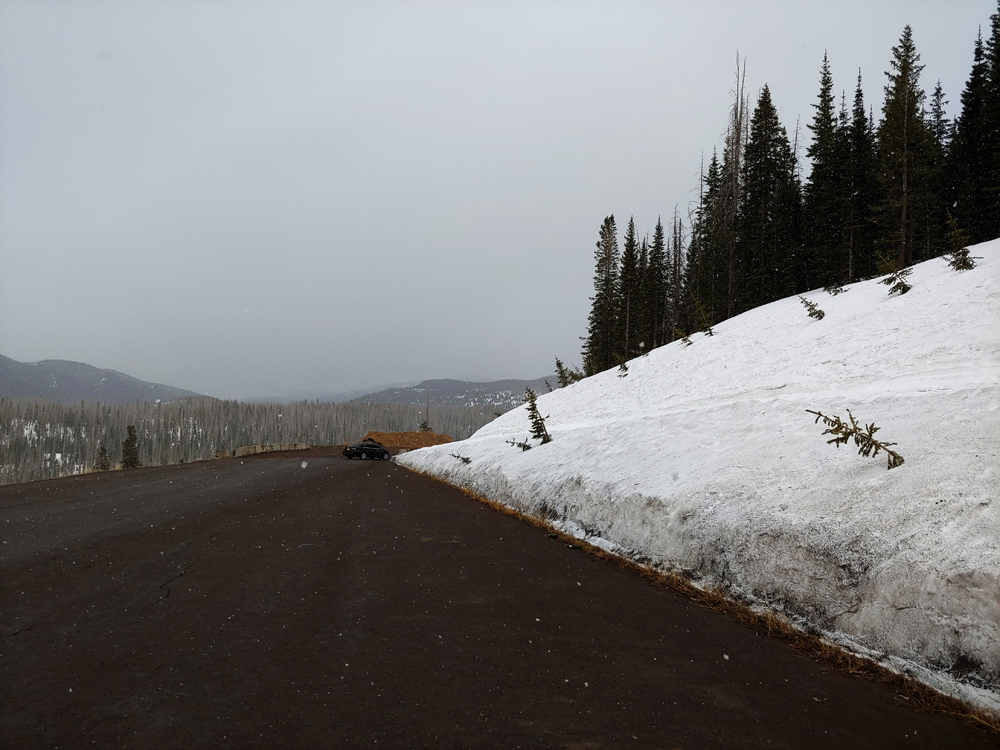 You can see the falling snowflakes in the picture, as well as the perhaps two feet of snow still on the ground in the mountains around the ski area. But again, no thunder, and gradually the sky began to brighten and the snow got lighter. However, being able to get internet, I could see that another band of storms was forming to the west and southwest. So I headed back down to the scenic overlook.

I was back there around 12:45, with one convective snow shower to my south and others to my west and northwest. Although there was no snow falling at this time at the overlook, I did get a rumble of thunder, which could have been from either or both of the aforementioned snow showers - the rumble seemed to come both from the south and the west, which may have been real or may have been a result of echos in the mountains. Here is a picture I took from there of the eastern edge of the convective snow shower to my west/northwest, which seemed to be intensifying: 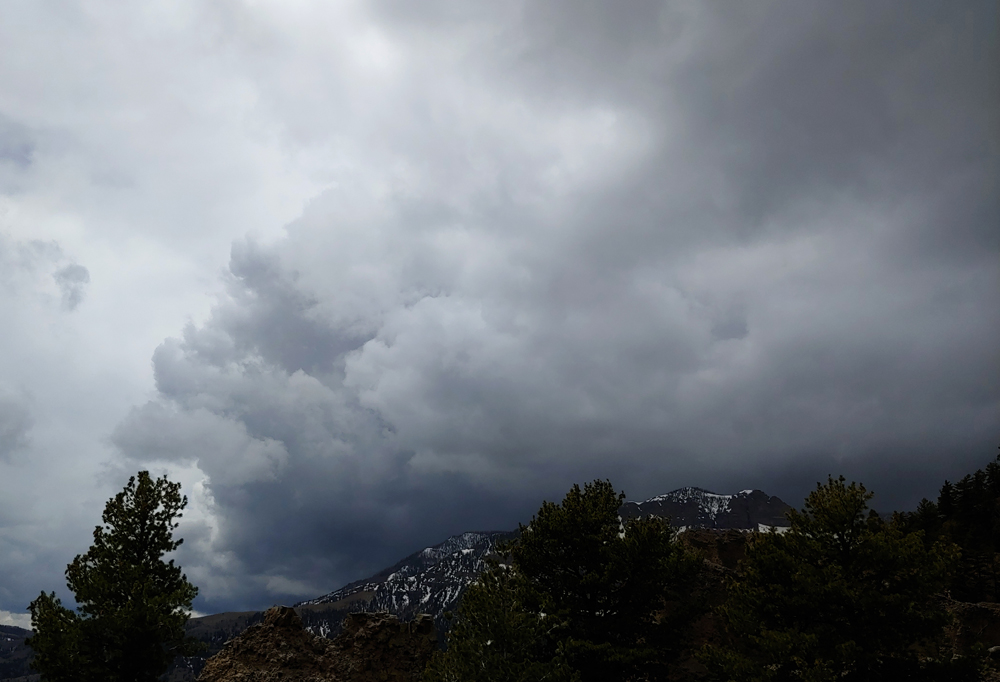 I probably should have just stayed there, but it looked to me like the shower just to my south might move up over the Wolf Creek Pass area, while the one in the picture above would likely pass farther north, so I started back up toward the pass. But I stopped again, and by around 12:55-1:00 could see that I had misjudged the movement of the showers. They were moving to the east or perhaps even a little southeast, not to the northeast. (I would figure out later that it was a little more complicated than that, but that was the effective movement.) As this picture shows, precipitation from the cell to the west/northwest was already moving onto the road between me and the scenic overlook, and to the southwest of where that was occurring, there was a dark updraft base: 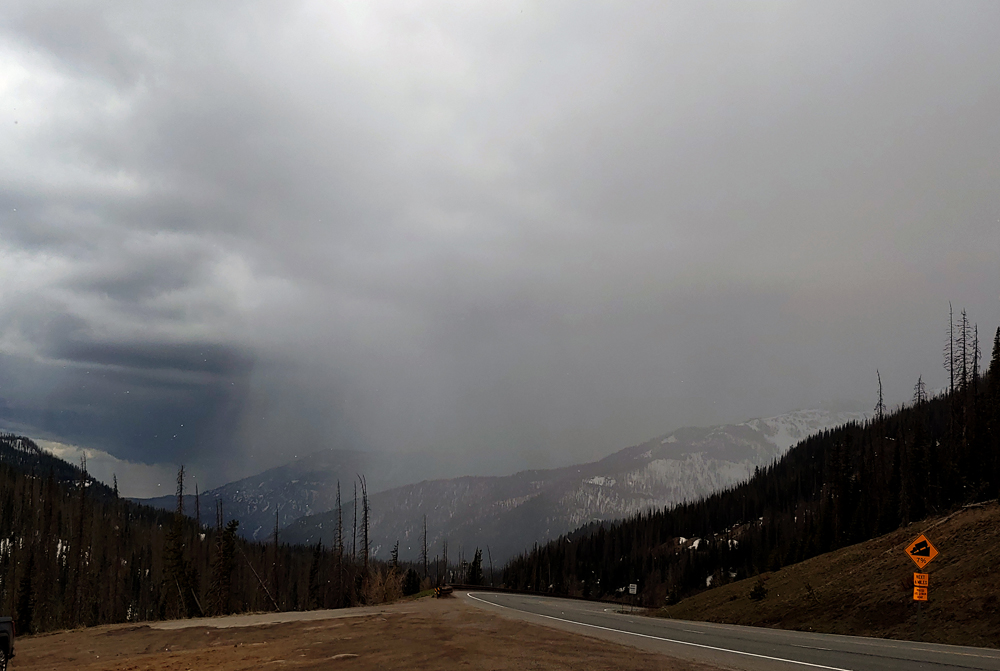 Already as I started back down toward the scenic overlook, a little snow was starting to fall. As I got closer to the overlook, it turned to graupel/snow pellets and became heavier. After getting back to the scenic overlook yet again, I remained there for around an hour with graupel/snow pellets coming down most of the time, mixed at times with snow and for a few brief times with a little rain, but it was mostly frozen precipitation. The temperature was in the mid-30s, though eventually over the course of the hour it fell below freezing to around 31. After 15 or 20 minutes I heard the first long, low rumble of thunder. Between about 1:30 and 2:15 I heard at least a half dozen more rumbles of thunder, low and distant at first, but around 2:00 a couple were pretty loud and preceded by visible flashes of lighting. Graupel/snow pellets, mixed at times with ordinary snow, continued to come down through this entire period. The preciptitation was mostly light, with heavier amounts evident slightly to my west and south, but at times came down fairly hard, making for some good thundersnow video. Here is a short clip with the loudest rumble, along with graupel and some ordinary snow coming down:

By around 2:15, it appeared that the heaviest of the snow had passed this location. Looking over the scenic overlook, I could see that there had actually been more accumulation down in the valley than up where I was, with the heaviest amount near the foot of the mountains on the northwest side of the San Juan River valley: 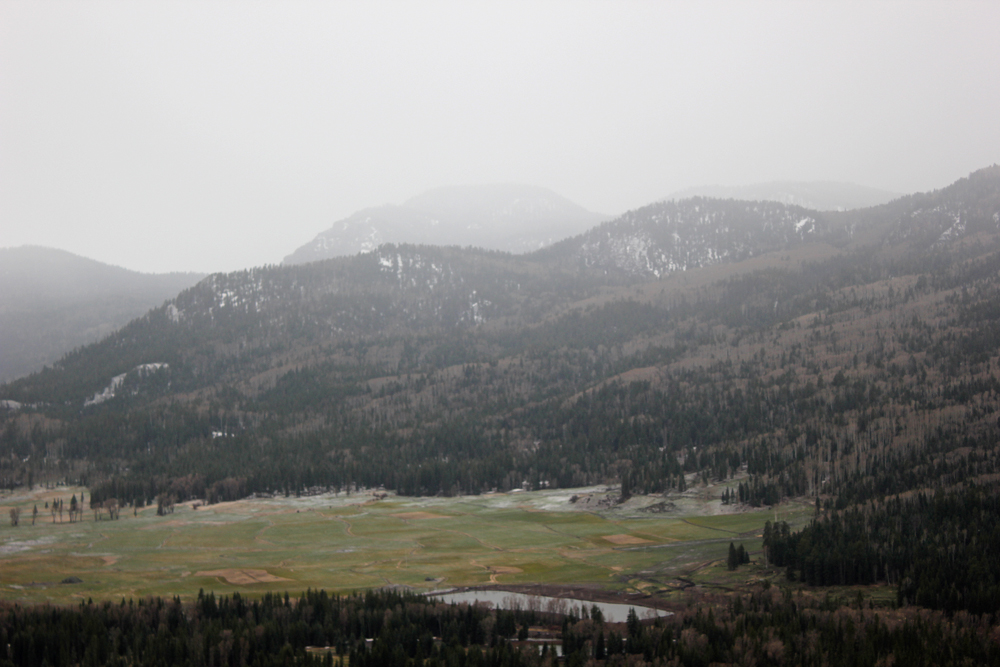 Not much accumulated on the ground where I was, as the ground was pretty warm in this southwest-facing location, but it did accumulate a little on the roof of my car: 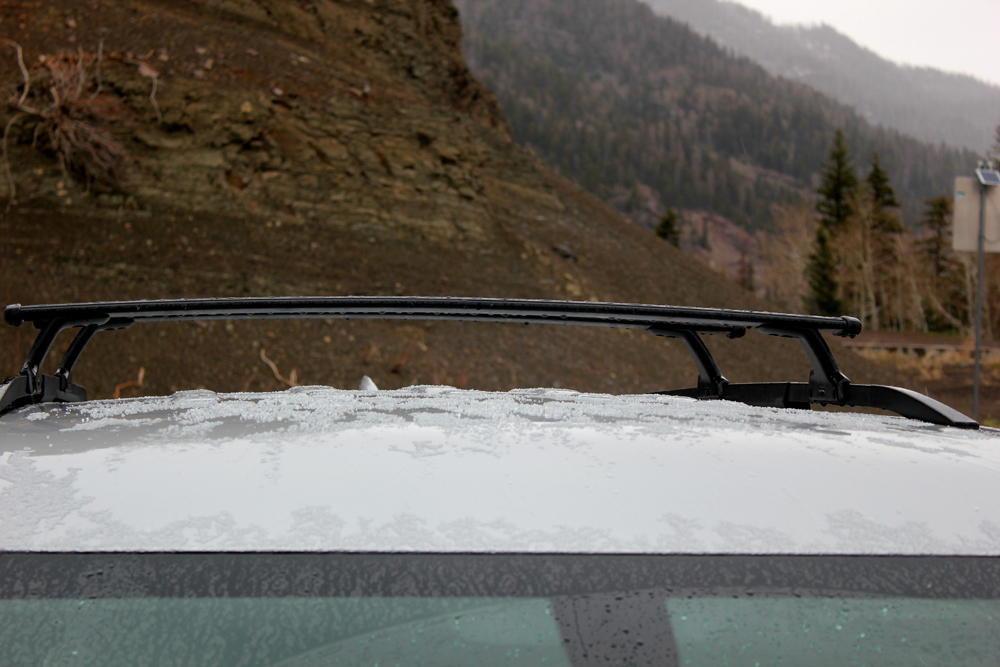 After this, I headed down into the valley to go home. But by the time I was a couple miles past Treasure Falls, it was starting to come down pretty hard again, so I turned onto the road along the East Fork of the San Juan River. There, I observed a varying mix of wet snow and graupel and rain, with quite a few more rumbles of thunder. At times it was mostly graupel/snow pellets and ordinary snow, although both were partially melted, and at other times more rain. It went back and forth, with more of the frozen precipitation when it was heavier and mostly rain when it was lighter. There was a little bit of slushy accumulation of graupel and snow, with thunder from time to time, a couple of them rather loud. The kind of oddball mix I like to call "thunderslush." Eventually I resumed my treck back to town, remaining in mixed precipitation all the way back to the east edge of Pagosa Springs, where the elevation is only around 7100 feet - far below the predicted 9000 foot snow level. Yet, there was enough snow and graupel to whiten the round, even a little into town. And a couple miles east of town, I saw a visible flash of lightning. After that, I stopped for a little more video, but there was no more lightning or thunder after that. Here is a picture showing the minor accumulation at the east edge of town: 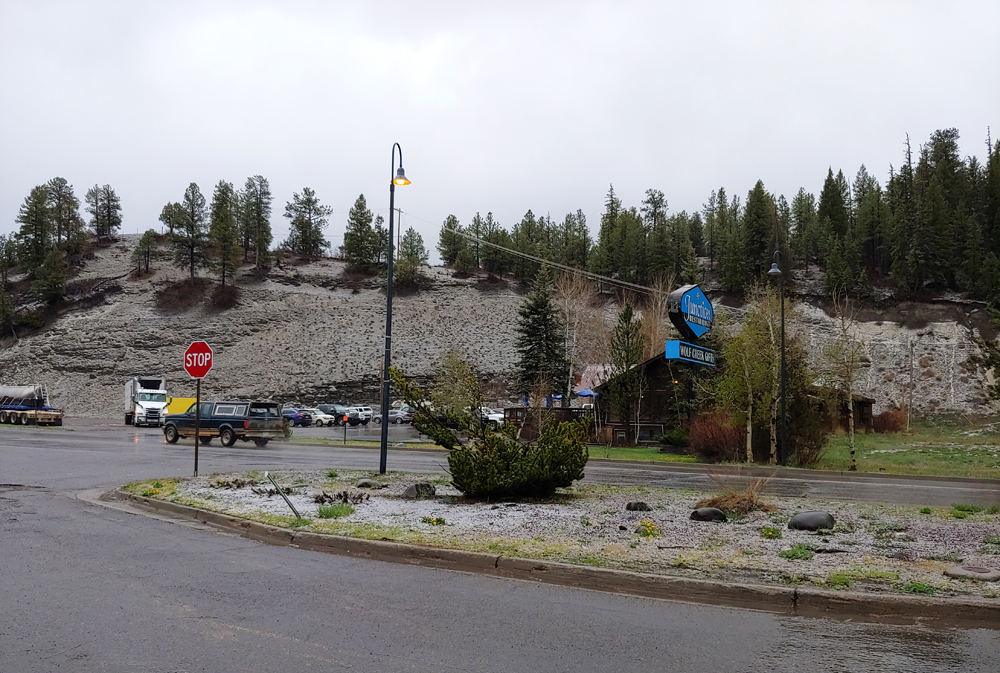 With this successful chase, 2020-21 is my longest-ever thundersnow season. My first intercept was way back on September 8, 2020, meaning my season has now been almost 8 months! And as I write this, it looks like there could still be more chances the week of May 16, if I am not on the plains to chase supercells. That decision will depend on the forecasts as that time period gets closer.