As a strong upper low passed across New Mexico, the combination of Pacific moisture, instability resulting from very cold upper air, and the approach of a back-door cold front from the east and a Pacific front from the west would produce a very favorable setup for precipitation across much of New Mexico, including widespread thunderstorms. And in the mountains above about 8500 feet, the precipitation type would be snow. So it seemed like a very good setup for thundersnow in the mountains above Santa Fe - I just had to wait for thunderstorms to move into the area.

By around mid-day, it was looking like it was about to happen. There was not much in the way of lightning near Santa Fe on the lightning tracker, but an intense shower had developed just south of Santa Fe and it looked like it was only a matter of time. With the low pressure center not too far south and moving slowly, the movement of showers and thunderstorms during the morning had been erratic at best, but it looked now like the dominant movement was a slow drift toward the west or northwest, which with time would probably change to moving toward the southwest as the low pressure got farther east. I could see updraft base extending northeastward from the shower extending just to the southeast of my location in Santa Fe, so I figured up the line in the mountains there could be thundersnow if the NE-SW band of updraft and showers expanded into a line. Which, as it turns out, it did. Around 12:30 I started up the road toward Ski Santa Fe, stopping around 12:45 to get this picture of the developing storm near the southern edge of Santa Fe: 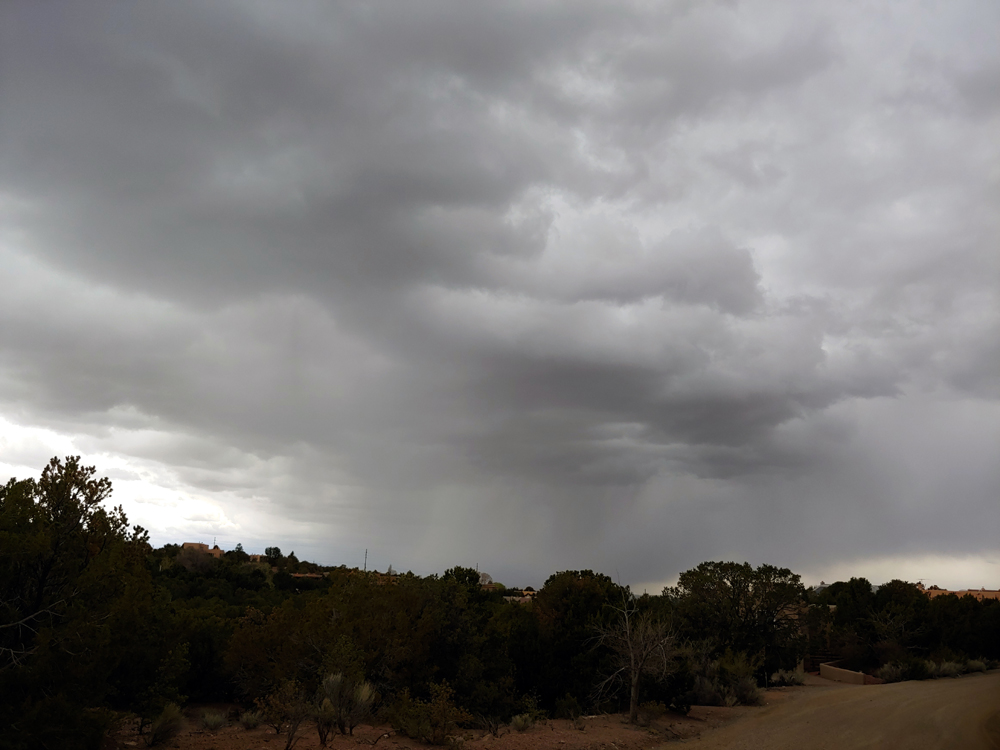 There was no thunder yet, but the storm was likely producing heavy rain and maybe some hail at the southern end of town. And notice the updraft base extending closer to me - this extended almost overhead, just southeast of my location.

From there, I headed northeast toward the ski area, through Hyde State Park and continuing on for another mile or two. Since I could see that the northwestward-moving precipitation had reached the ski area, and I was now getting increasing amounts of graupel/snow pellets, I decided to stop and get some video. But alas, no thunder yet. After getting video for a while with plenty of snow pellets but no thunder, I decided to go farther up as the precipitation lightened. It looked like the line had nearly passed over already, and would now likely be west of the ski area and the road I was on.

I stopped again at the scenic overlook just below the ski area. The storm seemed to be mostly past, but I would have a good view of it from here. As soon as I got out of the car, with very light snow still falling, I heard a rumble of thunder. Thundersnow! Over the next 15 minutes, I got about a half-dozen long, low rumbles of thunder, as very light snow continued to fall. I tried to get thundersnow video, but the video camera did not pick up the rather distant, low rumbles of thunder, particularly since much of the time I was getting blasted by wind, which the camera did pick up very well. However, what I did not get in video was made up for by what I did get in stills. Here are two panorama photomerges of pictures I tooks of the storm from the scenic overlook: 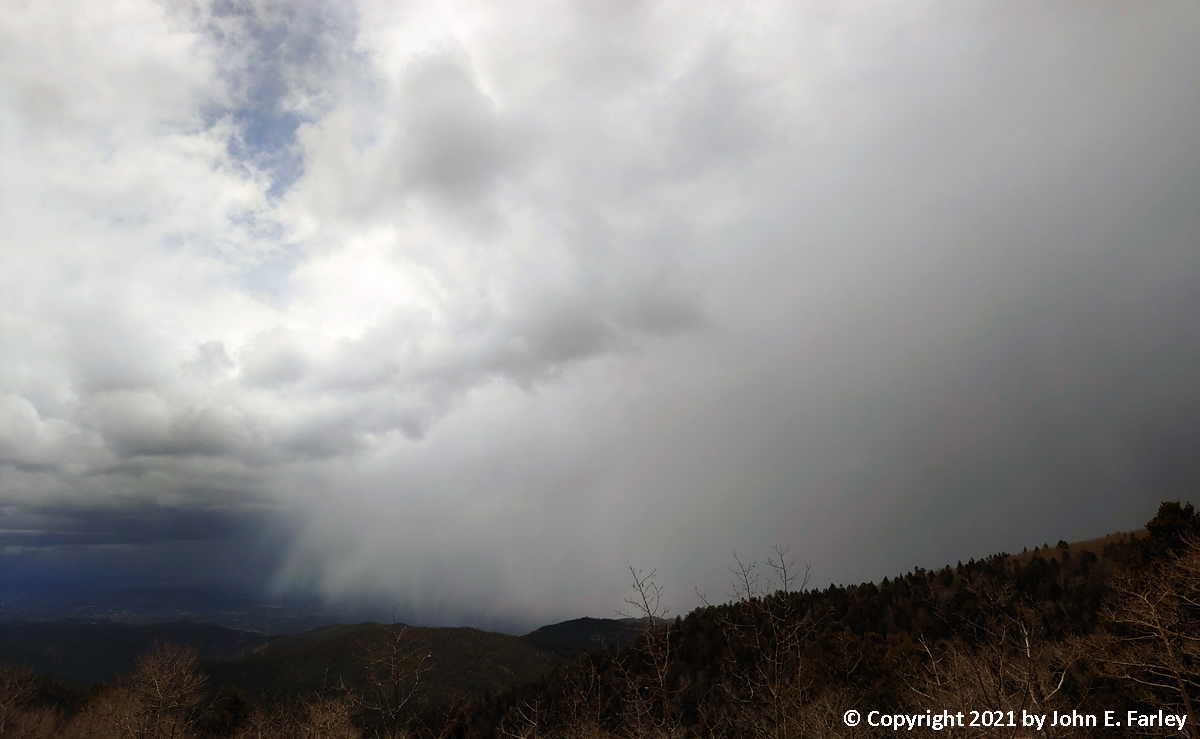 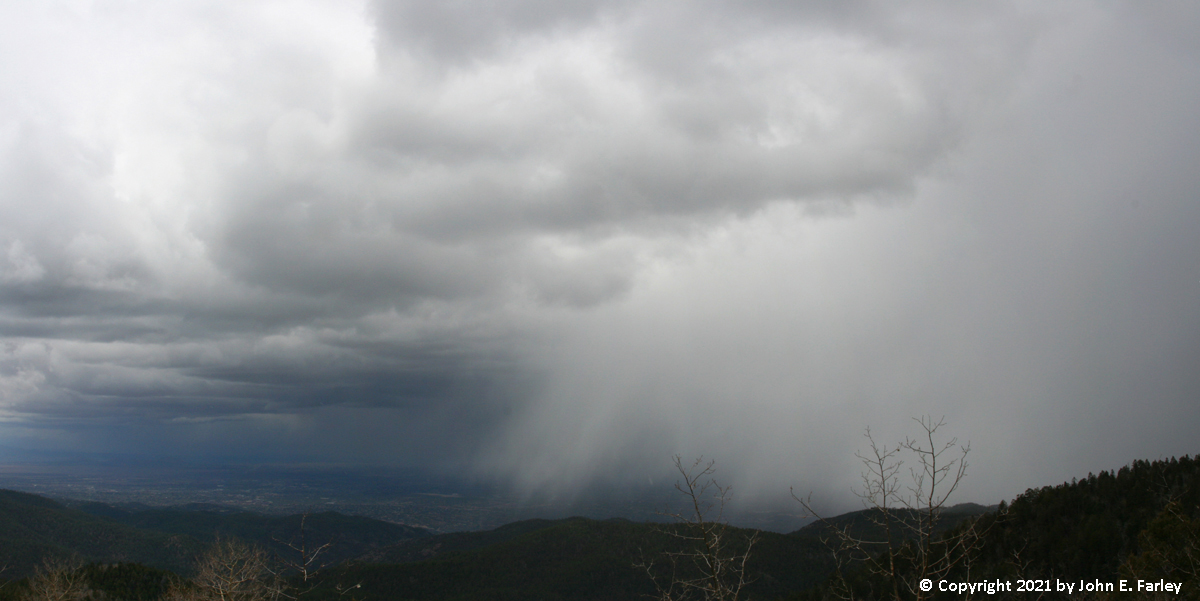 The storm on the right of these pictures, with precipitation just over the nearest ridge of the mountains, is the thundersnow storm. The thunder I was hearing mostly came from about where the right edge of these pictures would have been, or a little farther to the right (northeast). The darker precpipitation on the left, farther away, is near (by now probably just northwest of) the city of Santa Fe, where a tenth to a half inch of rain fell, accompanied in some areas by hail. Again, at my location only very light snow was falling; I would have loved to get into the thundersnow storm to get some good video of thunder with heavy snow or graupel/snow pellets coming down, but alas the storm was over a roadless area, at least at the altitudes above around 8500 feet where the precipitation type was snow. Here is a more zoomed picture showing the edge of the area of heavy precipitation:

By this time, the storms were in a pretty solid line from the west slopes of the Sangre de Cristo Mountains a few miles from my location all the way southwestward to the Sandia Mountains and parts of the Albuquerque area. The line formed quickly from one or two storms including the one pictured earlier that formed at the south edge of Santa Fe. At first the line moved toward the northwest, which put it just out of my reach to get into the heavy part, then it pretty much stalled out and remained in the same place, gradually becoming larger but weaker. Here are a couple of radar images showing the line of storms at 206 p.m. (first image) and 2:24 p.m. (second image): 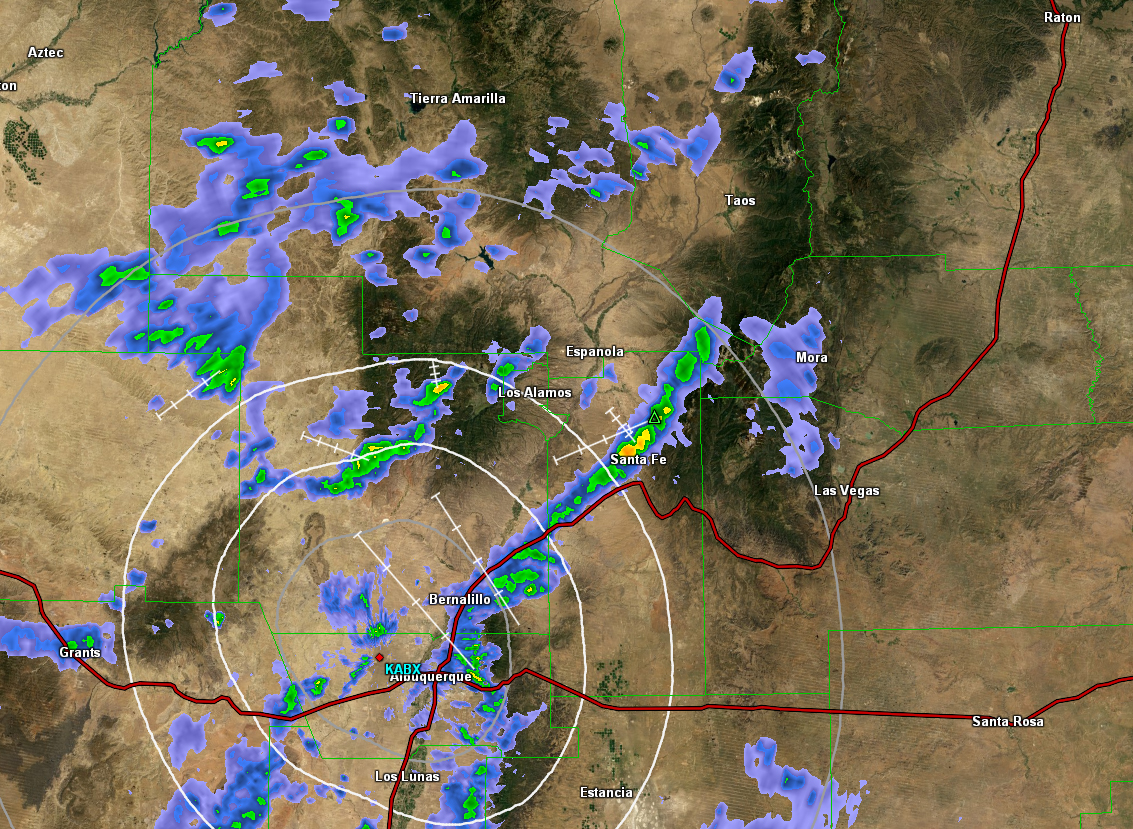 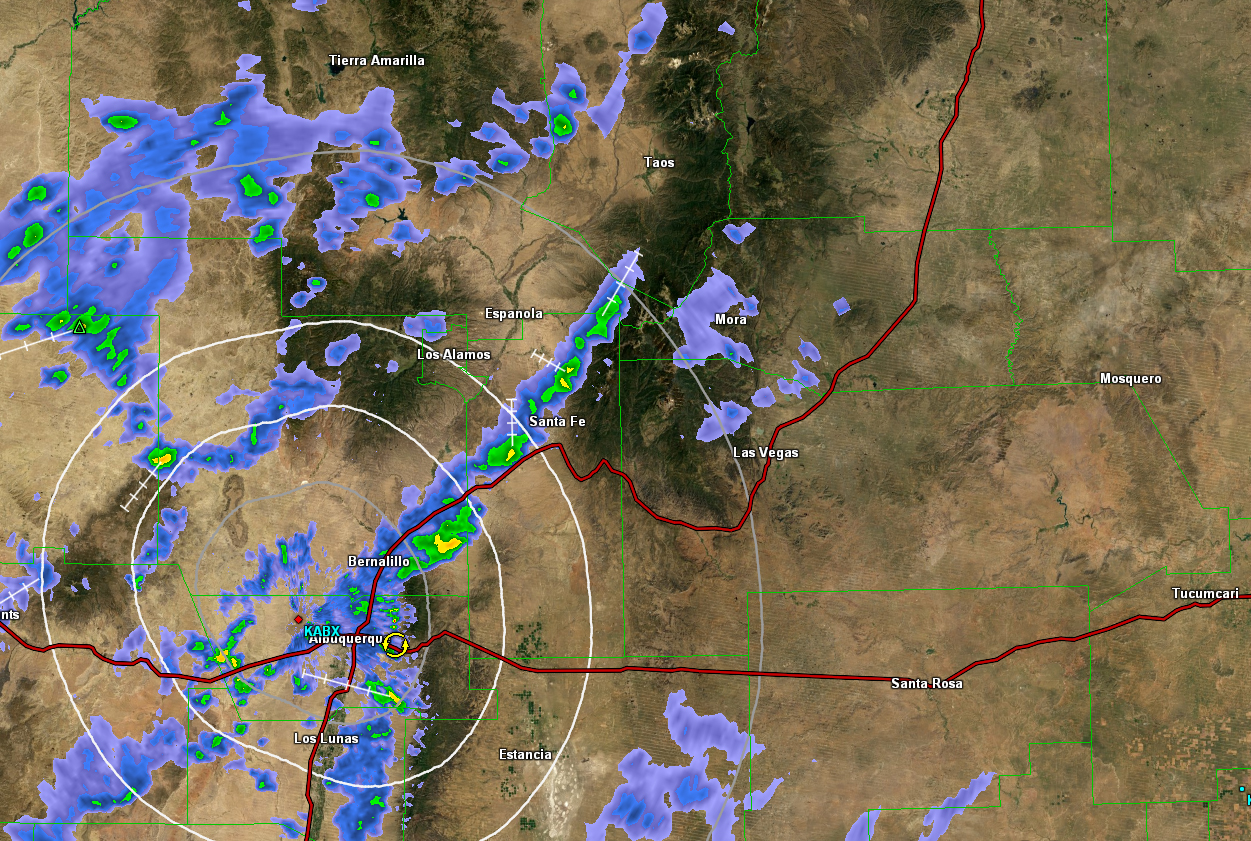 As you can see, the line did not move much between the times of these two radar images. Behind the line, i.e. to its east, was a large area of snow, some of which also shows up on these radar images around Mora and Las Vegas. This seemed to be slowly and gradually moving to the west, so I figured it would eventually move into the area where I was. After 15 minutes or so of very light snow and frequent rumbles of thunder, the snow seemed to be ending at the scenic overlook, and a small area of clearing moving in. I could see more towering cumulus up the line to the NE, so I moved the half mile or so to the ski area parking lot. There, light snow began to fall intermittently again for a few minutes and there were a couple more very distant rumbles of thunder. But that was it. I decided to hang around for a while waiting for the next area of snow to move in. I could get internet in the ski area parking lot, so I could track the radar and lightning tracker. Most of the lightning was in the main line, but there were a few strikes farther east near Las Vegas so I figured there was at least some potential in the area of snow that would move in from the east over the course of the afternoon.

Gradually it became evident that the heaviest part of the snow moving in from the east seemed to be coming in to the southwest of the ski area, between the ski area and the state park. So, I gradually moved down toward the state park, making several stops. The snow did increase in intensity, at times becoming mostly graupel/snow pellets, and the clouds looked convective. In a few areas the snow had accumulated to around a half inch on grassy surfaces with some in the trees, but despite a snowplow that made a pass one place where I was stopped, it did not seem to be accumulating much yet on the road. And no more thunder. Here are a few pictures from this phase: 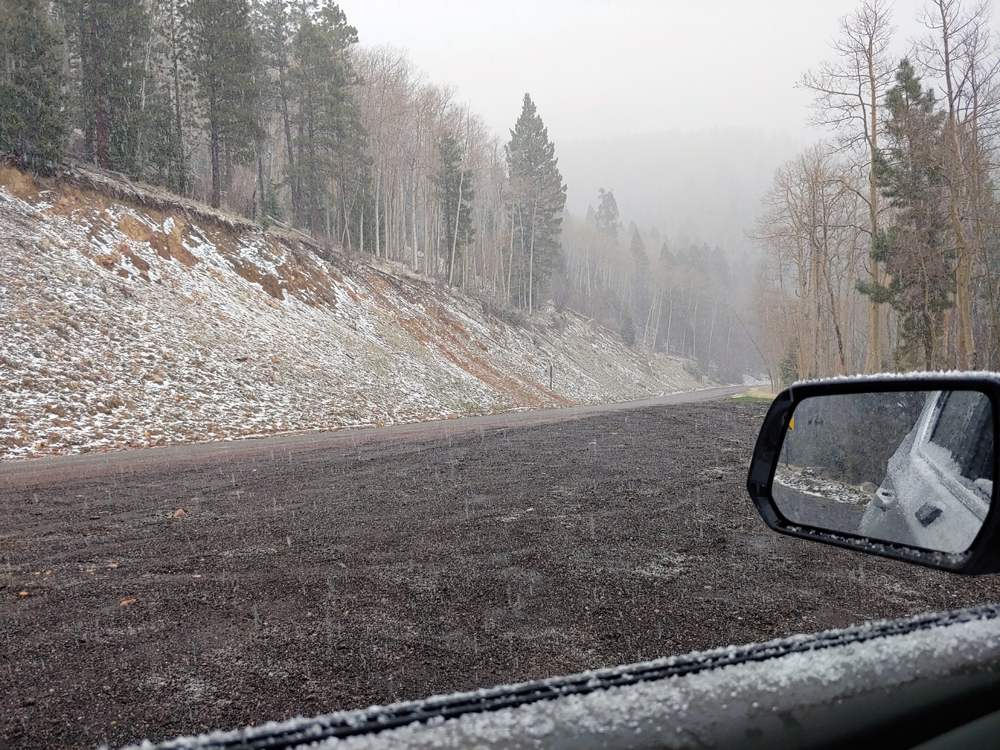 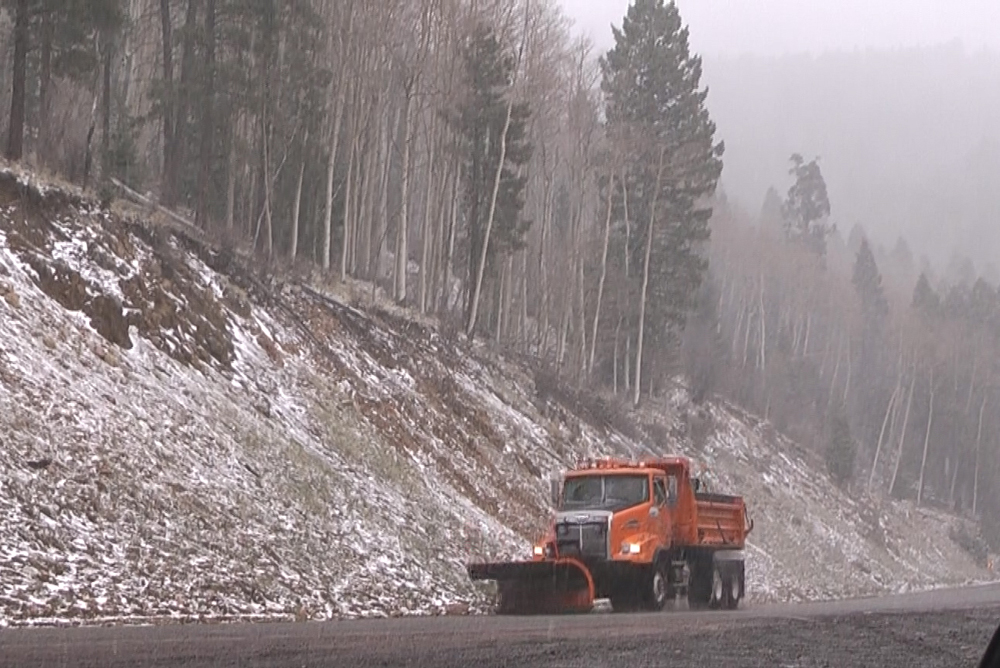 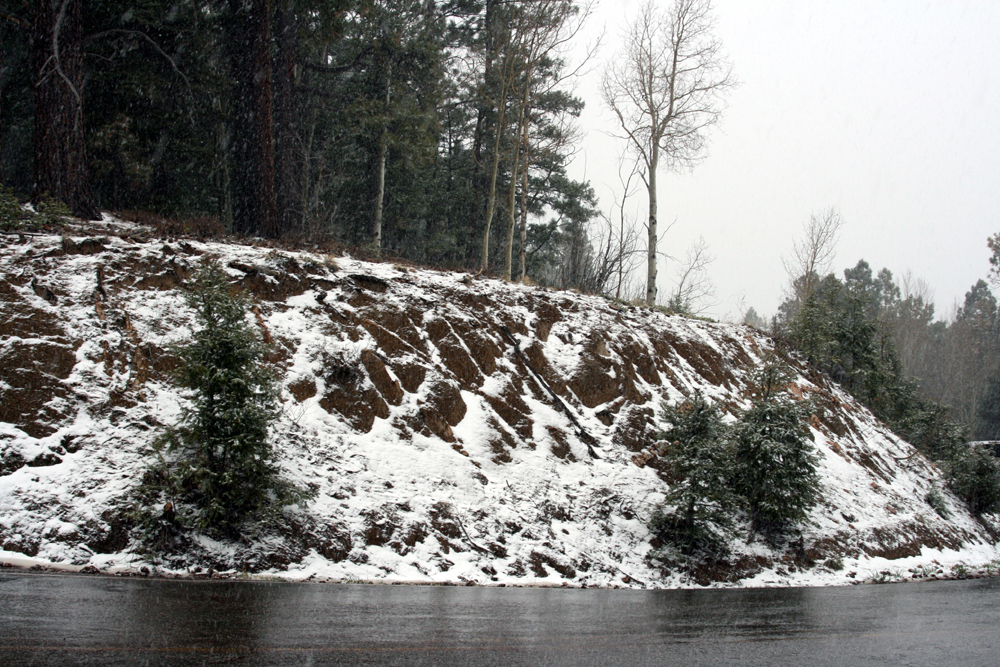 By around 4:00 p.m., about two hours after I had observed the thundersnow at the scenic overlook, it became evident that this second save of snow was winding down, so I decided to return to Santa Fe. The snow, lighter now, became mixed with rain near the upper end of the state park, and was all rain by the time I was farther down into the state park. More snow did move into the area around Ski Santa Fe again toward sunset and into the early part of the night, but I never saw any more evidence of lightning on the lightning tracker. By around 10 p.m., the action was clearly shifting to the south of I-40. Before that happened, areas on the southeast fringes of the Albuquerque area got well over an inch of rain, as a batch of storms formed on the southeast slopes of the Sandia Moutains just behind the initial line and continued to drift northwestward over the same areas for an extended amount of time. Later, up to 7 inches of snow fell in the Sacramento Mountains, as the storm provided much-needed moisture in several parts of New Mexico.