Between 3 and 4 p.m. the afternoon of April 17, I observed thundesnow southwest of Pagosa Springs, CO. This was associated with a poorly-organized but fairly strong storm system that affected Colorado and nearby areas from April 15 through April 17. A series of low pressure areas moved across Colorado in northwesterly to northerly upper flow over that time period. The first impulse produced heavy snow in Denver and the mountains west and northwest of there, then a second impulse rotated southward behind the initial storm. This second impulse produced around an inch of snow at our house in Pagosa Springs, CO early in the morning of the 17th. After that batch of snow pushed eastward, skies cleared, leading to a quick meltoff of the snow, but also creating instability the afternoon of the 17th. Thunderstorms, including a chance of thundersnow above around 6000 to 7000 feet, were in the forecast, and that forecast verified. Storms developed near Durango around 1 p.m., with a pretty good burst of lightning in that area per the lightning tracker. As they worked their way closer, I headed out around 1:30. At this time radar and the lightning tracker showed the strongest activity south of Bayfield, but looking at the sky from Veterans Memorial Park on the west edge of the Pagosa Springs area, it was evident that there was decent convection also occurring farther to the ENE along the same line of rain/snow showers, not too far NW of Pagosa Springs. I thought this area might intensify, and being at higher altitude, it seemed more of a sure bet that the P-type here would be snow. So I headed NW up North Pagosa Blvd. to intercept the line and hope to catch some thundersnow.

Just before 2:00 p.m., when I was within a mile or two of the leading edge of the line, I got this picture: 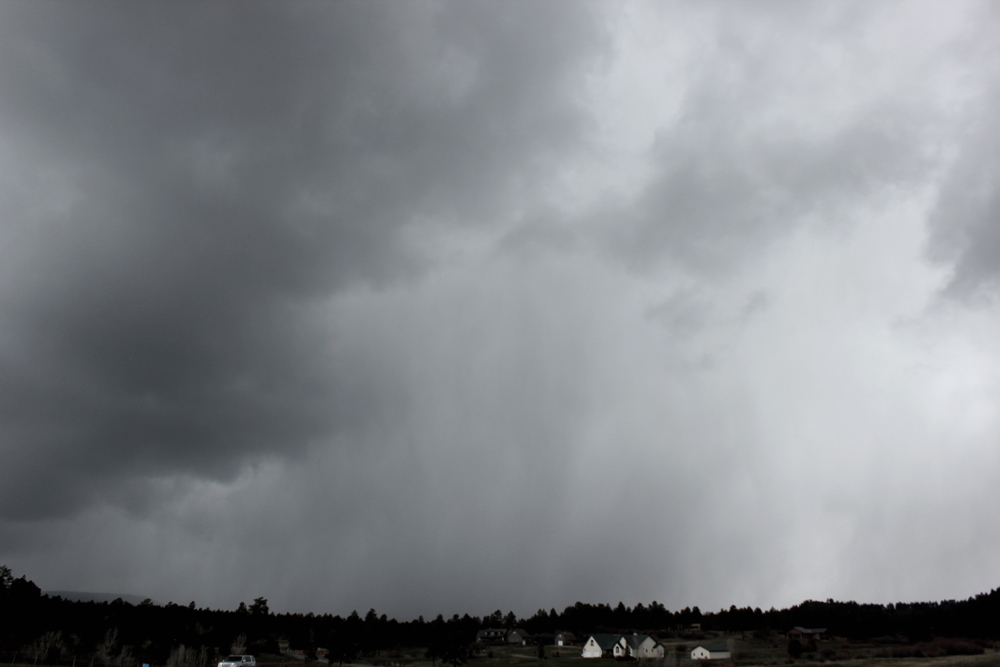 The convective nature of this precipitation is very evident, and another mile or two up the road I was in a heavy burst of mostly graupel and some ordinary snow mixed in. I hung out there for 10 or 15 minutes, but got no thunder. And the lightning tracker was still showing lightning to the southwest, now a little to the west of Chimney Rock National Monument, so I decided to drop south, get back ahead of the line, and re-intercept somewhere along or a little south of U.S. 160. Checking the lightning tracker once more after I got back to 160, I could see that most of the lighting was south of the highway but now there were also a couple strikes to its north, somewhere roughly north of Chimney Rock National Monument. As I headed southwest on 160, I was starting to get into snow several miles before I would have reached Chimney Rock, near Keyah Grande, so I decided to head south a little on Cat Creek Road (which would take me to somewhat higher elevation). As I dropped south a few miles on that route, and then a little west, I got into moderate snow fairly quickly. And the first place I stopped along that road, I also started getting long, low rumbles of thunder. All told, I ended up getting a total of six to eight such rumbles, with rather large snowflakes coming down, at times rather heavily. The first couple rumbles of thunder seemed to be coming from my west, and then the rest of them afterwards from my south. However, the lightning that was causing this thunder was not close, and thunder does not travel as well through snow as it does through rain. As a result, most of the thunder was not loud enough to capture on video, but I did get one that can be clearly heard on my video. Here is a short video clip showing that:

Radar image from 3:33 p.m., around the time the lightning above was captured: 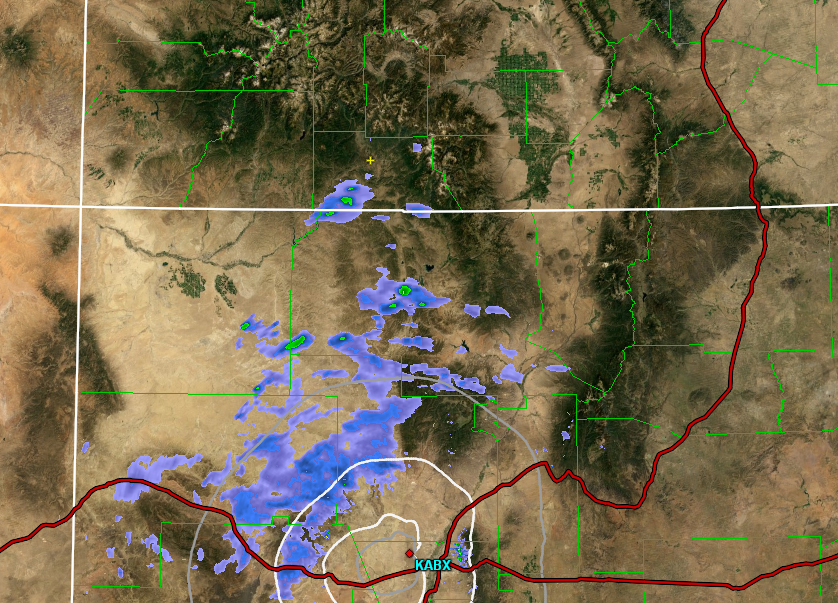 My location was near the north edge of the precipitation returns on the radar southwest of Pagosa Springs (the cross on the radar image is the approximate location of our house). Keep in mind that this area is quite distant from any radar site, and that often snow in Archuleta County does not show up at all on radar. But these convective storms had tops high enough that some, though not all, of the precipitation did. 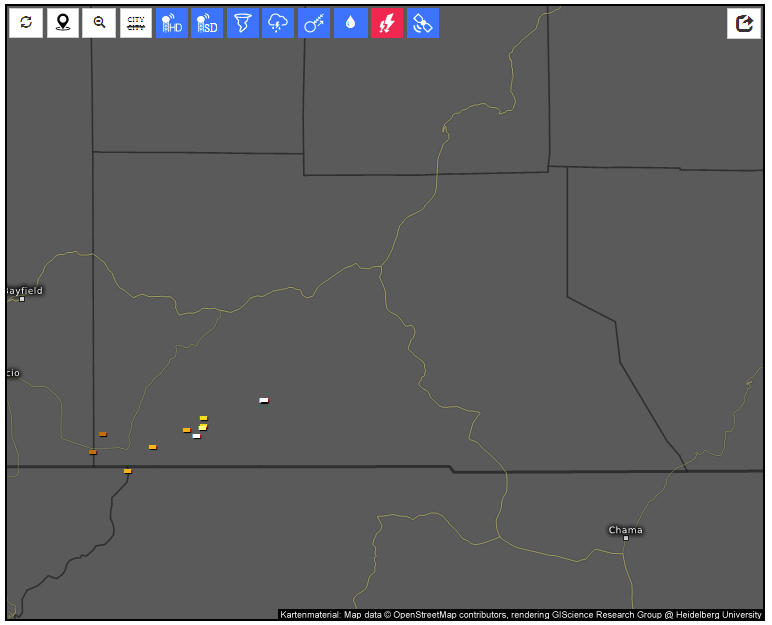 This lightning archive does not capture all of the strikes that appeared on the lightning tracker in real time. For example, in real time I noticed a couple strikes north of U.S. 160, which do not show up on this archive. Also, the number of strikes in the southwest part of Archuleta County was greater on the real-time tracker. However, this does give you an idea of what was going on. Again, my location was a few miles north of the northeasternmost strike that appears on this tracker - close enough to hear thunder, but it was low, rumbling, and distant from my location. 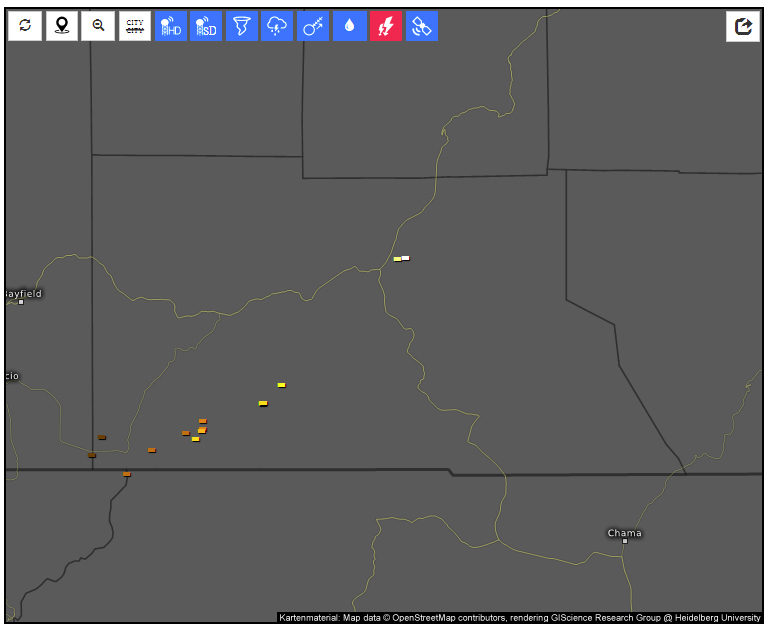 Most of the lightning strikes with this system occurred in a swath that started around Durango, CO around 1:00 p.m. and extended ESE through the afternoon to the Chama, NM area, passing just southwest of Chimney Rock National Monument. As you can see in the 4:00 p.m. image above, however, a separate cell popped up just east of Pagosa Springs around 4:00 p.m. The lightning archive shows two strikes there, but once again, more appeared on the real-time lightning tracker, around five or so in a short time. I headed east through Pagosa Springs in hopes of getting some more thundersnow with this new cell, but I was too late. However, as I neared the east edge of town, a substantial accumulation of grapuel/snow pellets was on the ground, and the state police were assisting with a car in the ditch near the intersection of routes 84 and 160. So that cell must have been pretty intense, at least for a short time. But by the time I got there it had moved up into the mountains, and did not appear to be producing any further lightning.

Finally, here is a map from the lightningmaps website showing all of the strikes that occurred over the course of the day in the area included on the map:

While this map may truncate a little of the northwest end of the swath, the swath of lightning strikes from around Durango extending ESE to around Chama can be seen clearly. I put the letter P on the map to show the approximate location of Pagosa Springs. This map seems to include all of the strikes that were on the real-lightning tracker I was using, from the same website. Note that there is a cluster of five or so strikes just east of Pagosa Springs and that this map also picks up on the handful of strikes that occurred northwest of there and north of Chimney Rock. As you can see, this line of storms generated quite a large number of lightning strikes for a storm in which much of the precipitation was falling as snow.