Decided to head out around 2 p.m. Per the lightning tracker, lots of lightning strikes were occurring near the CO/NM state line south of Pagosa Springs, with storms tracking northeastward. Rain and snow were also showing up on the radar in an enlarging cluster south of Pagosa. I decided to head down US 84 southeast from Pagosa, which might put me in position to intercept a thundersnow cell. P-type was a potential issue, but as I drove through downtown Pagosa Springs, elevation around 7000 feet, the precipitation was still mostly snow, so I figured in any heavy shower, it would be snow. Now, just to get some lightning.

A few miles southeast of town, I think just past the Wildlife Park, I could see a very heavy shower was moving in, so I turned off on a side road and stopped to get some video. A heavy shower of graupel (snow pellets) mixed with ordinary snow quickly moved in, but there was no thunder and lightning. Once this seemed to have mostly passed over, I decided to move farther southeast, since most of the lightning strikes had been closer to the NM state line.

As I approached Confar Hill, probabably somewhere around 2:30, the sky was again darkening, and snow began to fall. It gradually increased, and I turned off the highway at the top of Confar Hill, left onto Buckles Lake Road. You could only go a short distance before coming to a gate where the road is closed for the winter, and it was very muddy. But I stopped there, got out the video camera with the snow coming down pretty hard, and almost immediately when I began to video, there was a loud, rather long rumble of thunder. Instant thundersnow. I got two more rumbles, the next one almost as loud but the third one sounding more distant, before the snow lightened and the sky began to brighten. But that was enough to give me one of my better thundersnow videos in a long time.

Here is that video:

I decided to go a little farther down US 84 to Chromo to see if any more cells were moving in. However, things got pretty interesting when maybe around a mile or a little less below the bottom of Confar Hill, I noticed something going on in the road ahead of me. The road suddenly went from just wet to close to an inch of snow, slush, and ice on the road. There was a truck upside down in the ditch on the northbound side of the road, with a county truck stopped alongside it. I asked the county worker if there was anyone in the vehicle in the ditch, and he said they were OK. A half mile or so farther there was a car in the ditch (but not overtuned) on my side of the road (southbound), but since there was no shoulder and the road was covered with snow and ice, I did not think it was safe to stop. Shortly after that, the road went back to just wet. Apparently where the core of the storm crossed the road, there was a narrow swath of very heavy snow, graupel (snow pellets) and/or hail. When I got to Chromo, it was apparent that to encounter any further heavy cells, I would have to go well into NM, so I turned around and headed back toward Pagosa, passing very cautiously through the swath of heavy frozen precipitation accumulated on the road. As I got toward Pagosa, it became evident that there were more heavy showers moving in, so I turned onto a side road that led to the south entrance to the Loma Linda subdivision. There I encountered a heavy shower of rain and sleet which rather quickly changed to a mixture of sleet and graupel. But no thunder or lightning. So again I returned to 84 and continued north toward Pagosa, encountering several emergency vehicles and a snowplow heading south toward the area where the cars were in the ditch.

When I got back to the edge of Pagosa, I stopped at the County Fairgrounds to look at a new batch of strong convection going up just northeast of Pagosa Springs along or just northwest of US 160. Here are a couple pictures: 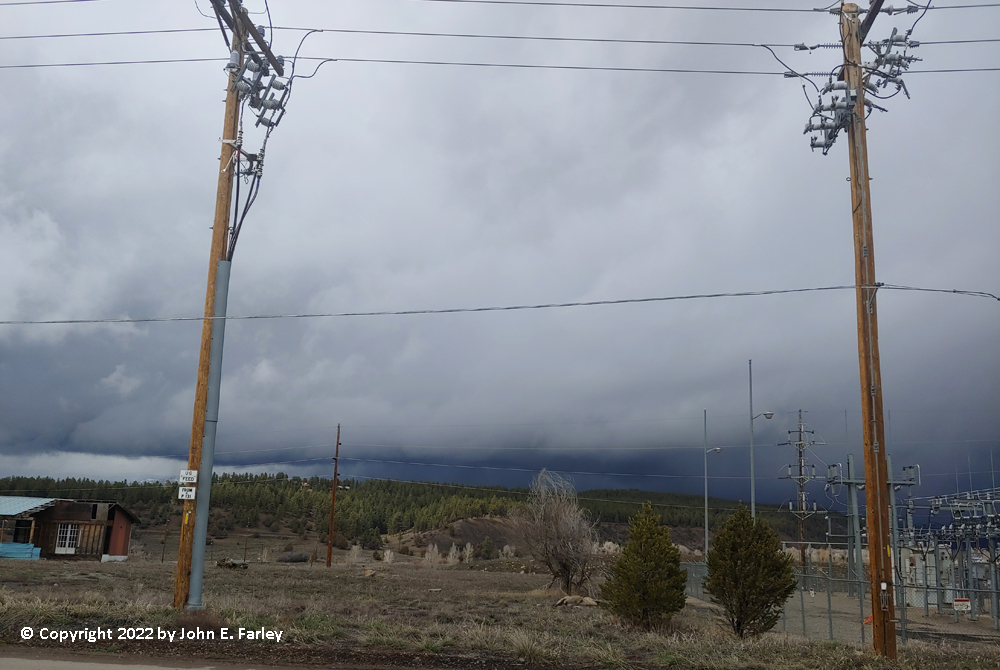 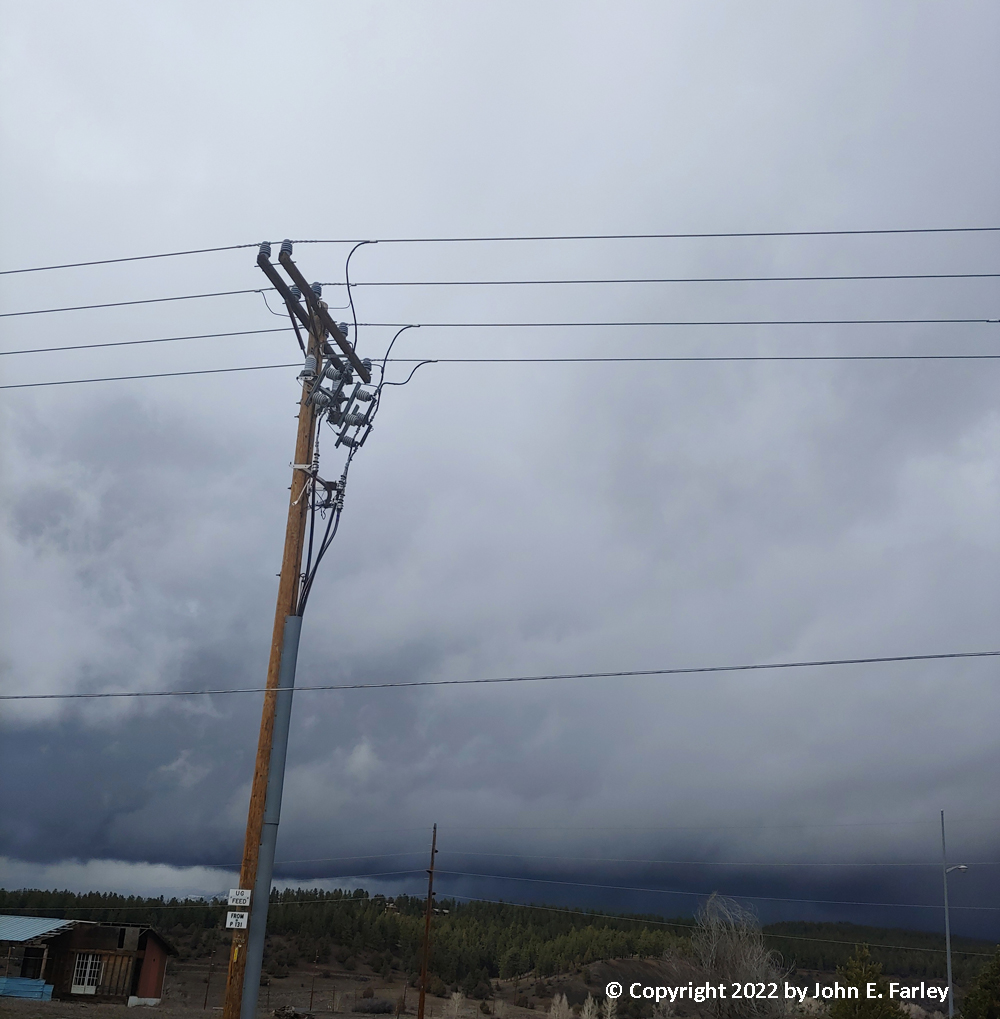 This looked like it had lighting/thundersnow potential, but I could not see any new lightning in that area on the lightning tracker, figured the storm was moving away from me, and I really needed a potty stop and was not too far from home, so I headed home. After downloading my video from my video camera to my computer, I noticed on the lightning tracker that there was a lot of lightning in that area, and it had continued for quite a while. So areound 4 or so, I headed back out again. I had thought the storm was moving away from me, but as we were now near the center of low pressure circulation, the storm had prtty much stalled out and sat in one place for more than an hour. And as I neared the storm northeast of Pagosa, I saw a couple flashes of lightning, first ahead of me in the precipitation and then overhead once I got into the precipitation. I stopped in the small subdivision about 6 miles or so NE of town (San Juan River Village), on Alpine Drive, in heavy graupel with perhaps an inch on the ground and the roads, and managed to get a few more rumbles of thunder on video, as the graupel (snow pellets) continued to fall and occasionally mixed with some big snowflakes.

Here is a short video: