As low pressure would track across northern New Mexico during the day, forcing and steep lapse rates, perhaps helped along by surface heating from areas of sunshine, would result in a chance of thunderstorms over southern Colorado. Above 7000 feet, there was a good chance it would be cold enough for precipitation in these storms to reach the ground as snow or graupel/snow pellets. So the day definitely had thundersnow potential. Through the late morning and early afternoon, thunderstorms did develop in southern Utah, far SW Colorado near the Four Corners, and far nothern New Mexico. I was regularly checking the radar and lightning tracker to decide when and where to head out, but no thunderstorm was shown that could move into the Pagosa Springs area in less than an hour or so, so I stayed put. After about 1:30, I noticed a small shower showing up on radar just to my southwest. For a winter rain or snow shower to show up that far from any Nexrad site and in a mountainous area, it had to be fairly substantial, but there was no lighting on the tracker so I decided to stay put for the time being. Then a few minutes later, I heard a rumble of thunder, so out the door I went.

This cell formed maybe 3 to 5 miles WSW of my house. At this time, most of the cells were moving pretty much due north, so I headed a little west to a good viewing point, and could see that just to my west, it was producing a fairly heavy burst of snow and/or graupel/snow pellets. Although I could see an occasional flash of lightning, I wanted to be in the precipitation so I could get video documenting thundersnow. So I headed northwest on North Pagosa Blvd. until I was a ways into the precipitation, which was mostly graupel (snow pellets). The temperature was in the mid-30s. I found a good spot to stop on a residential cul-de-sac maybe 3 miles NW of my house, and before I could even get video started on my phone (no time to mess with my video camera, though I did have it), a long rumble of thunder occurred. I got about the last half of it on video as the snow pellets came down fairly heavily. This was around 3:00 p.m. Then, for 5 minutes as mostly graupel mixed with a little ordinary snow came down, nothing. I was worried I might have missed the show and a little bummed, since while driving to catch up with the storm I had seen a CG bolt zap down just ahead of the main area of precipitation - would have made a great shot with the lightning trigger or a video capture. But I wanted to be in the snow and get video of lightning and thunder with snow/graupel coming down.

Not to worry, though. About 5 minutes after I started the video, I got a long, low rumble of thunder. Then not long after, two flashes of lightning followed quickly by loud thunder, both less than a mile away. And with the second one, I even saw the CG bolt through an opening in the trees where I was getting video. Only a little bit of the bolt was captured on video, but you can see part of it between trees in the upper right part of this photo: 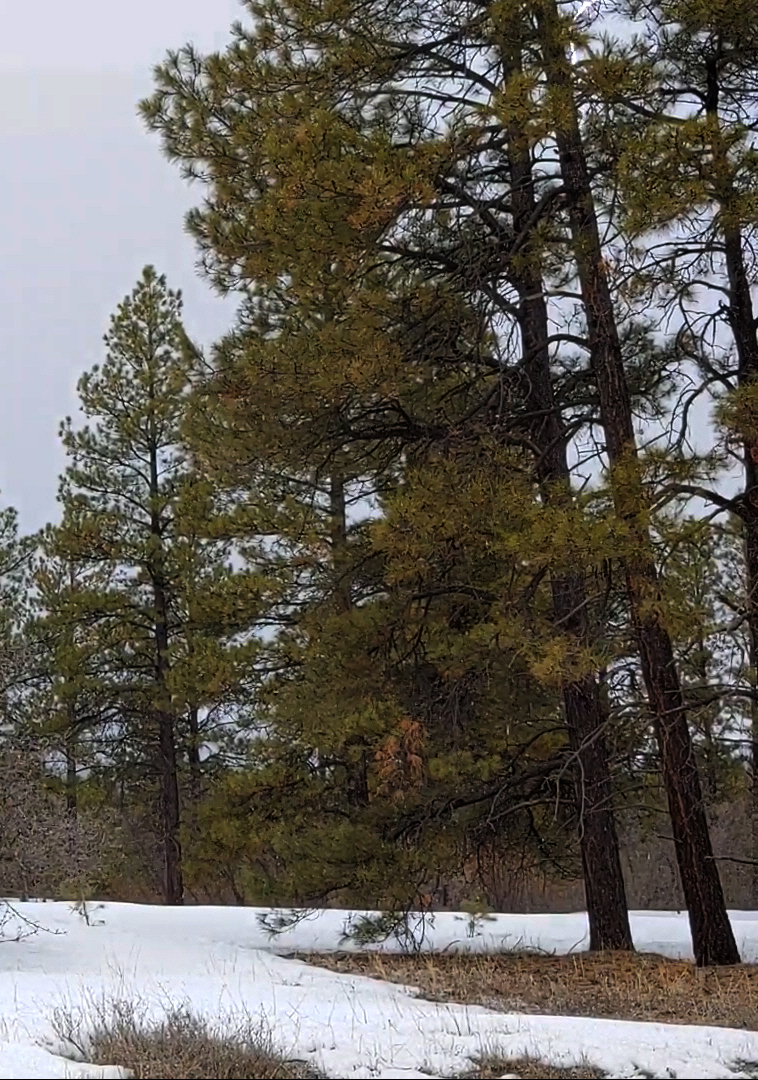 I got thunder a total of four times after the initial one that I only got part of - two loud ones associated with nearby CG and two long low rumbles. All of them with snow and/or graupel/snow pellets visible falling in the video. So definitely a thundersnow video success!

Here is the video:

By the time of the last thunder, the precipitation had diminished to almost nothing, as the storm contined its mostly northward movement. So I moved farther northwest on North Pagosa Blvd. After a couple miles I caught up and was soon in a very heavy burst of graupel along the stretch where the road divides into one-lane segments each direction. I turned off on a side road to get away from traffic and got more video, as graupel up to 1/4 inch in diameter came down. But it was definitely graupel, not hail, as it never lost the characteristic styrofoamy texture of graupel/snow pellets. By this time the temperature had fallen below freezing, with my car thermometer wavering between 30 and 31. However, despite the heavy burst of graupel, there was now no thunder and lightning. The lightning tracker indicated there still was some, but it was to my west now, probably too far away for the thunder to carry through the snow and graupel. Generally, in snow, thunder cannot be heard as far away as in rain, because of the muffling effect of the snow. I moved northwest one more time, getting in fairly heavy precipitation again, but this time it was mostly ordinary snow as opposed to graupel. But again, no thunder. There probably was still some lighting in the storm, but now it was even farther to my west, as the movement of the storm gradually curved from just west of due north to a northwesterly movement. And later after I left it, the storm moved in an even more westerly direction, eventually moving due west as it passed roughly over the Purgatory ski area north of Durango. But the storm was ahead of me now, and with new storms developing to the south, it was time to head back toward home and get ready for the next round.

I returned to the original spot where I had seen the first storm, Veteran's Memorial Park. Here I could see the decent structure of what was a developing second thundersnow storm, looking across the mesas to my south that the storm was moving over: 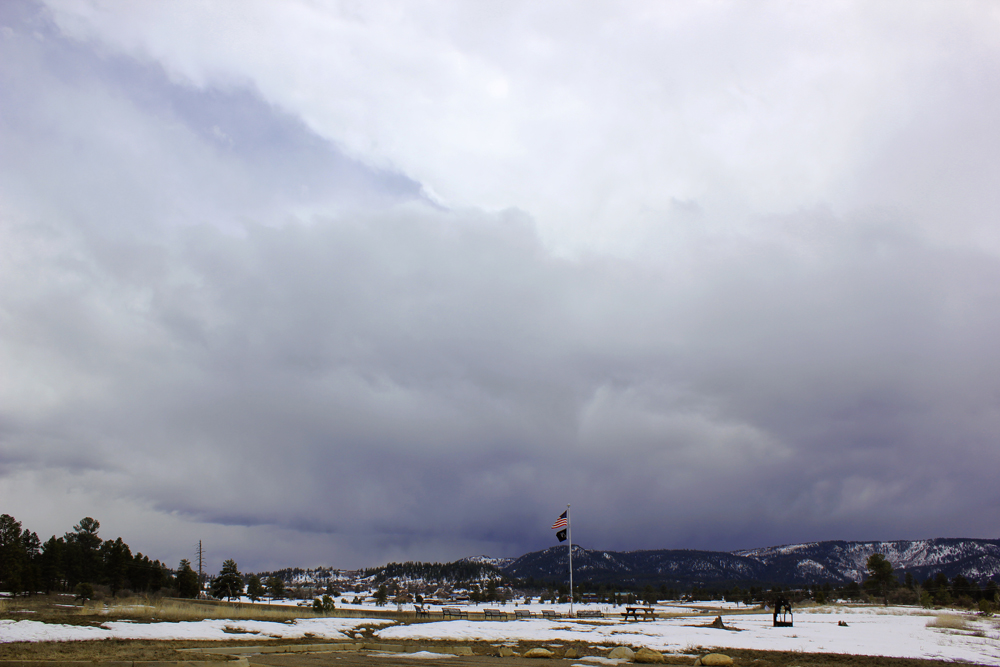 This storm, probably 25-30 miles away at this time, also developed a narrow, dark area between the updraft base and the ground. Here is a picture of that: 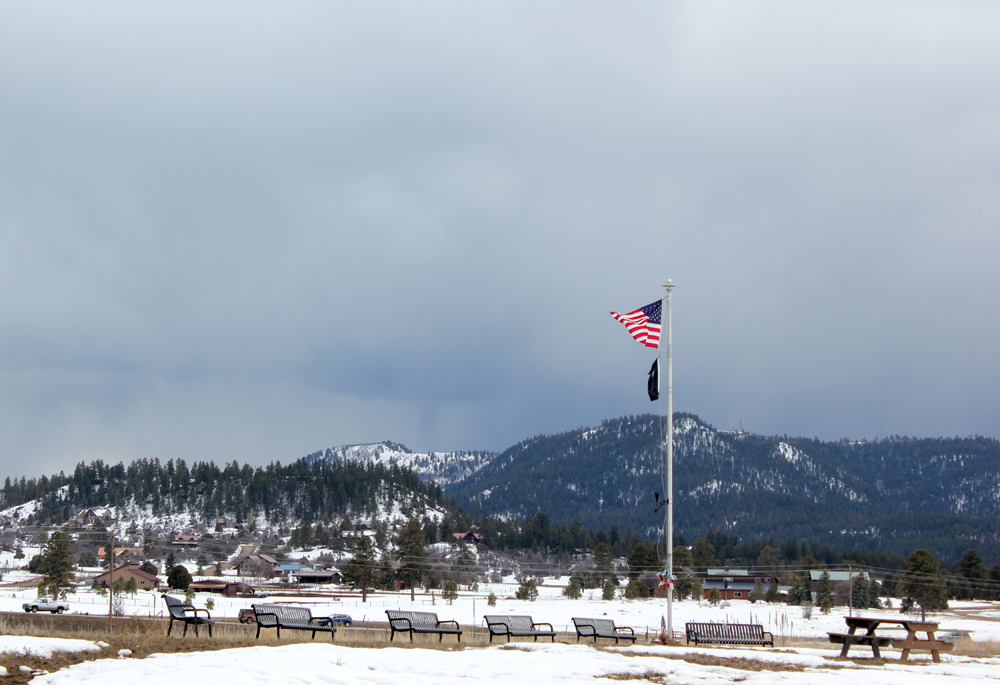 I got a little excited because I had heard talk of possible funnel clouds farther north near Grand Junction, but zooming in as close as possible with my video camera revealed that what I thought was more likely was true: This was just a narrow precipitation shaft that developed under the cloud base. Since it was evident that the storms were still pretty far away, I went home to copy my video to the computer and take a look at it. But after a half hour or so I could see that the new showers and storms that had developed over northern New Mexico were getting closer, and that there had been some CG lightning strikes just on the CO side of the state line. So I headed out again, returning for a third time to Veterans Memoral Park. Here I could see that the precipitation was within a few miles to the southwest of my location, so before long I decided to head into it. At first, I expected to intercept the core of this storm somewhere near or at least not much past Aspen Springs. But it became evident that I would have to go farther. The reason for this is that this storm was moving to the northwest, not close to the due north as the original one had started out doing. The reason for the increasingly westerly movement of both storms is that the low pressure passing to my south in northern NM was moving farther east, so that I was more and more in the westerly flow circulating around the low pressure on its north side. The heaviest precipitation in this storm, it turns out, was passing somewhere closer to Chimney Rock National Monument. I went there, and a little south of there, observing heavy snow at times (all ordinary snow, not graupel now), but no thunder. A later check of the lightning tracker showed that around a dozne lightning strikes had occurred in far southern Colorado with this storm, southeast of Chimney Rock and northwest of Dulce, NM. But by the time the storm reached the Chimney Rock area, there was no more lightning. I probably could have gotten into thundersnow in this storm if, instead of going home earlier, I had taken the unpaved back roads into the area between Pagosa Springs and Navajo Lake, but that was a little more adventure than I wanted to undertake. So after a while of watching heavy snow come down near Chimney Rock, I headed home. 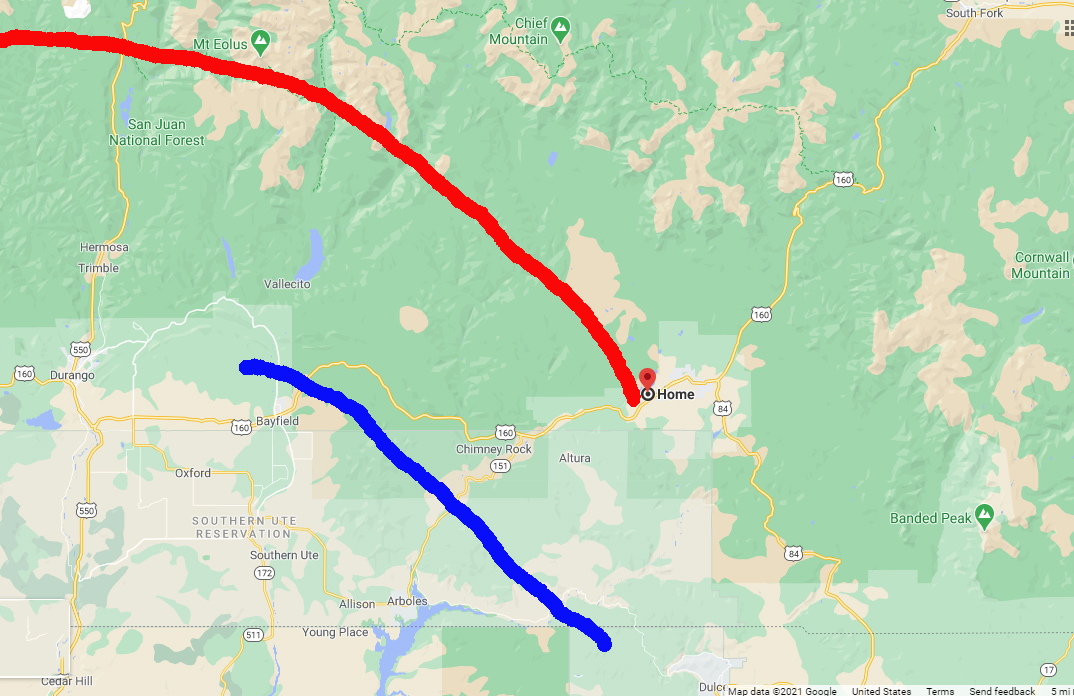