As predicted (with both a severe thunderstorm watch and a flash flood watch in effect), thunderstorms developed rapidly early in the evening across Missouri along and north of I-70 as a lower-level jet developed across the region. Two boundaries aided in the storm development. One was an outflow boundary from storms the night before, which was located slightly to the south of I-70 and the St. Louis area. The other was a slow-moving cold front approaching from the northwest. A shallow layer of slightly cooled air was over the St. Louis area, north of the outflow boundary as a result of the previous night's storms. Highs in the St. Louis area September 1 were in the mid-80s, about 5-7 degrees cooler than the previous days. The result of this is that initially, as the storms began to build into the St. Louis area early in the evening, they were elevated. In otherwords, the rising air that generated the thunderstorm did not come all the way from the surface, but rather from the top of the layer of cooler air near the ground, as the lower-level jet drove warm, moist, unstable air northward over the cooler at ths surface.

Around 8 p.m., the first storm, elevated and non-severe, passed just north of the Edwardsville area. I was able to capture some of the impressive cloud-to-ground (CG) lightning that occurred with this storm as it passed north of where we were staying in Troy, IL: 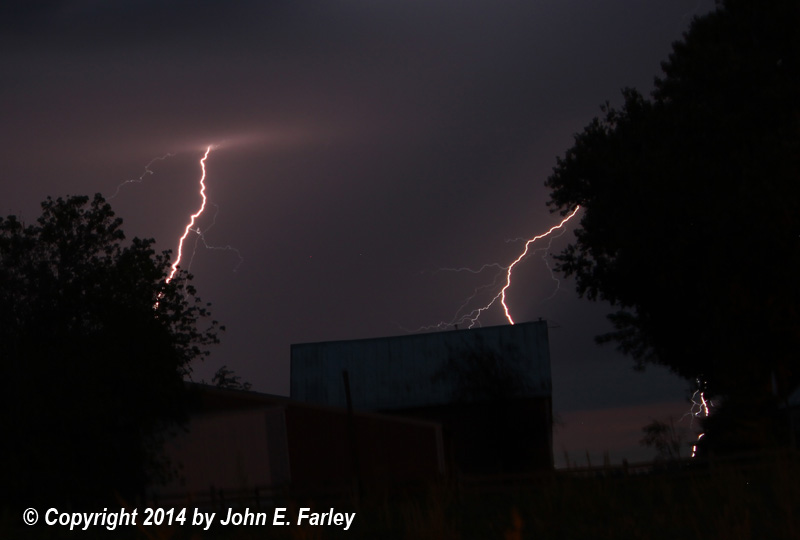 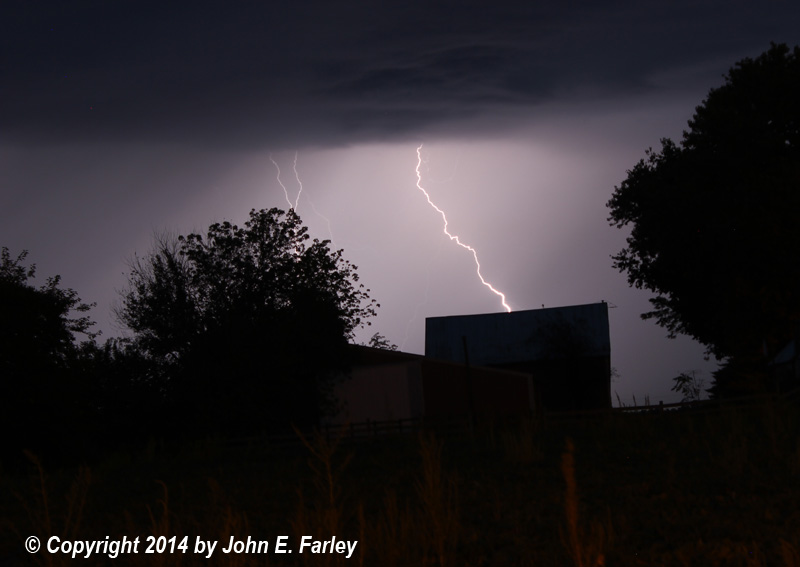 A little later, two lines of storms developed northwest of the St. Louis area and tracked east. The first of these storms gradually evolved from a linear structure into a supercell, as it moved into the northern suburbs of St. Louis. This storm was also at least slightly elevated, as it was still over the shallow pool of cooler air near the ground. It garnered a series of severe thunderstorm warnings as it moved across north St. Louis County and Madison County, IL. This storm produced mainly sub-severe wind and torrential rain in north St. Louis county eastward into the Edwardsville, IL area, where it also produced some small hail. The one severe report I saw for this storm was between Edwardsville and Carpenter, IL around 9:30, where high wind blew down large trees on a house and a barn. Around this time, the storm put on a truly spectacular display of CG lightning, which I was in good position to photograph from Troy, IL as the storm moved through the Edwardsville area: 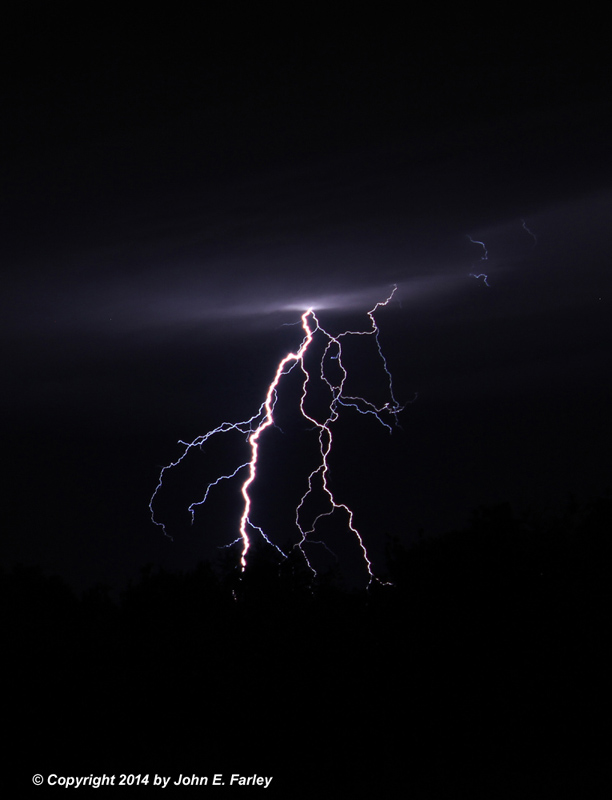 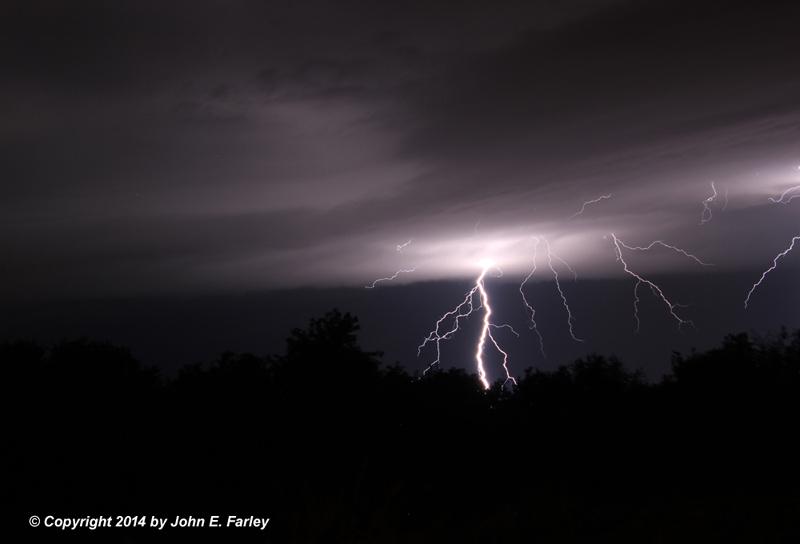 As the updraft area of this now well-developed supercell storm moved closer, basically moving eastward along or just north of I-270 just to the north of my location, a spectacular "mothership" mesocyclone came into view. Lit up by the lights from the business district along route 159 in Edwardsville and Glen Carbon, it offered a view rarely seen in Illinois, especially at night: 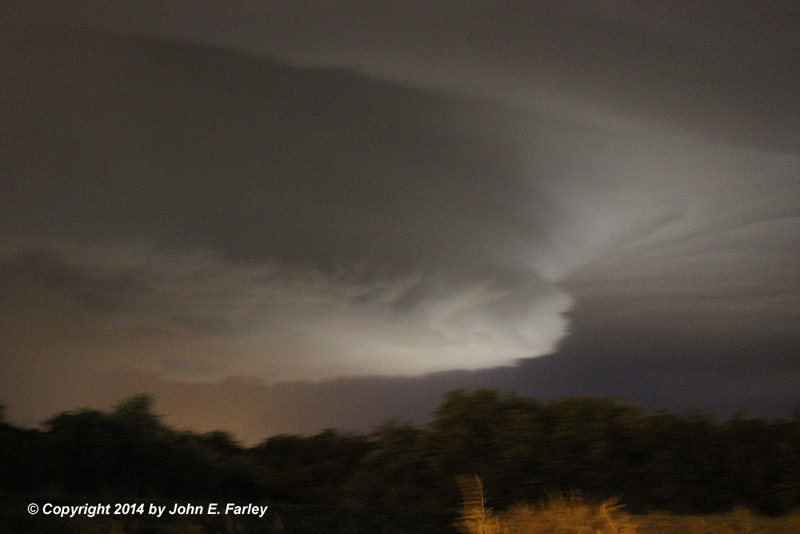 Sorry the picture is a little shaky - there was too much nearby CG lightning for anything but quick hand-held photography - but you definitely get the idea. One of the most visually-impressive supercells I have ever seen in Illinois!

Below is a radar image I captured as the supecell storm moved over Edwardsville. You can clearly see the hook echo and supercell look to the storm, as well as a 1-inch hail marker, although I did not see ground confirmation of any hail that large. 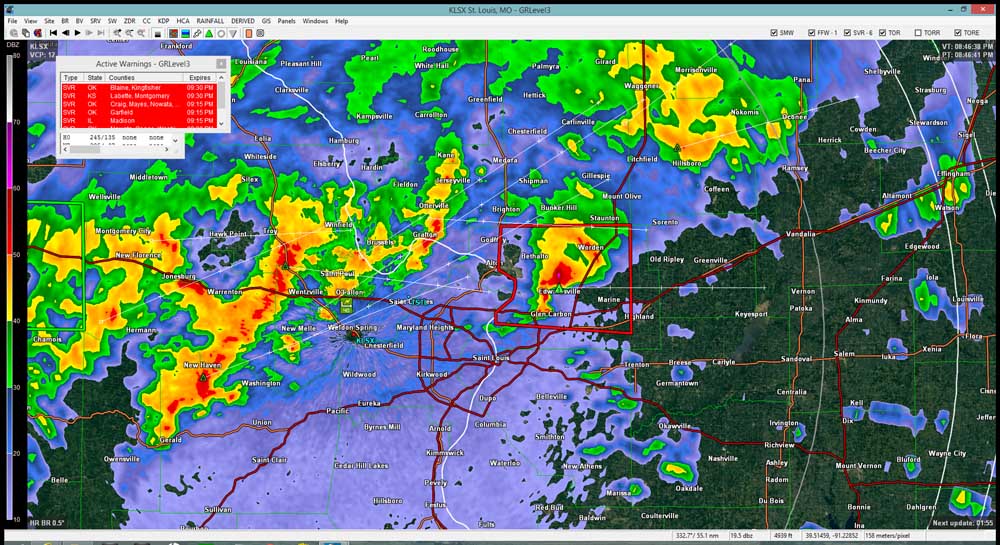 You will also note yet another line of storms coming in behind the supercell. The southern end of this line eventually also took on a supercell structure. Unlike the storms farther north, the southern end of this storm, where the supercell structure developed, was right on the old outflow boundary and thus, this storm was able to become surface-based. The result was that the storm produced a high-end EF-1 tornado which was on the ground for about 6 miles in the House Springs area in Jefferson County, MO. This southern storm received two tornado warnings, the first of which was issued about the time the tornado began, but five to seven minutes before it caused damage to structures in House Springs.