On September 11 and 12, 2012, the combination of a low pressure system, favorable monsoonal flow, and a cold front led to widespread convection and precipitation across Colorado and neighboring states. Several areas, notably the Las Vegas, NV area, San Juan County, Utah, and the Waldo Canyon burn scar in Colorado near Colorado Springs, experienced flash flooding as a result. In the early evening of the 11th, storms south and east of Pagosa Springs, CO offered me some nice photo ops. When I took the first picture below, all I had was my iPhone, as I was not out looking for storms at the time, but this storm - the tail end storm in a line of storms east and southeast of Pagosa Springs - offered up some interesting structure as it began to suddenly intensify a little before 6 p.m.: 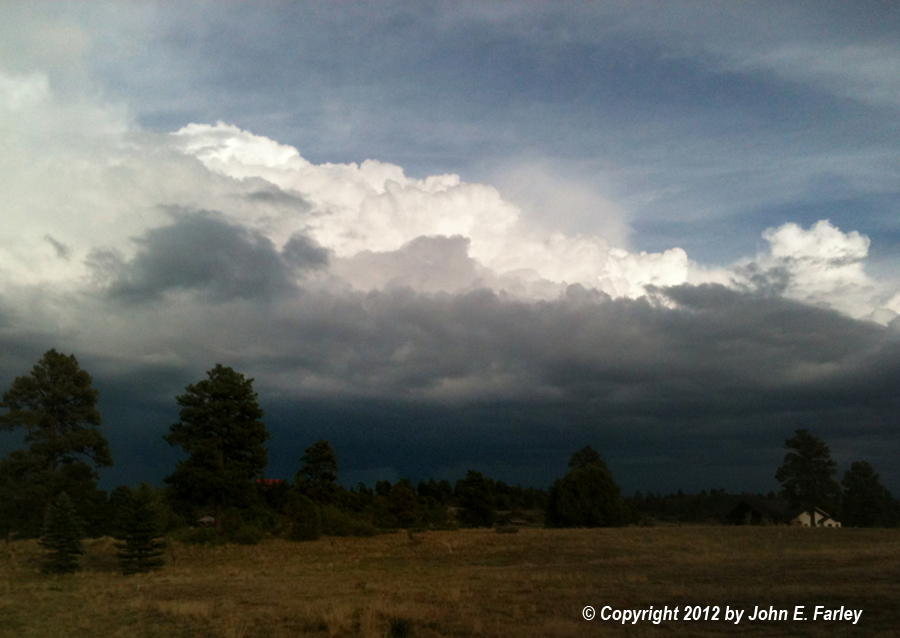 Notice the lowered area under the updraft base just left of center in the picture. As the updraft intensified, a lot of rising scud appeared, and it quickly congealed into a solid lowering - I'd definitely call it a wall cloud since it was right under the main updraft. I did not see any rotation, and it was too far away to verify it if there was any - but I doubt it represented any real threat, since tornadoes are very rare in this area, and it gradually disappeared in rain the next five minutes or so - but it looked impressive for a while.

When I got home, I noticed that the tower above where I had seen the lowering was overshooting the rest of the storm's top by quite a bit, so after unloading a bunch of stuff I had in the car I grabbed better cameras and headed back toward where I could see the storm. By the time I got to a place with a good view, it was about a half hour after I took the picture above, and the storms had congealed into a line of heavy storms over the San Juan Mountains east of Pagosa Springs. Here is a panorama I stitched from six shots with the zoom lens:

Nothing real out of the ordinary, but nice to see some kind of storm structure in a hot, dry year in which there hasn't been much. Below is a more zoomed shot showing the interaction of the storm's cloud-base features with the mountains: 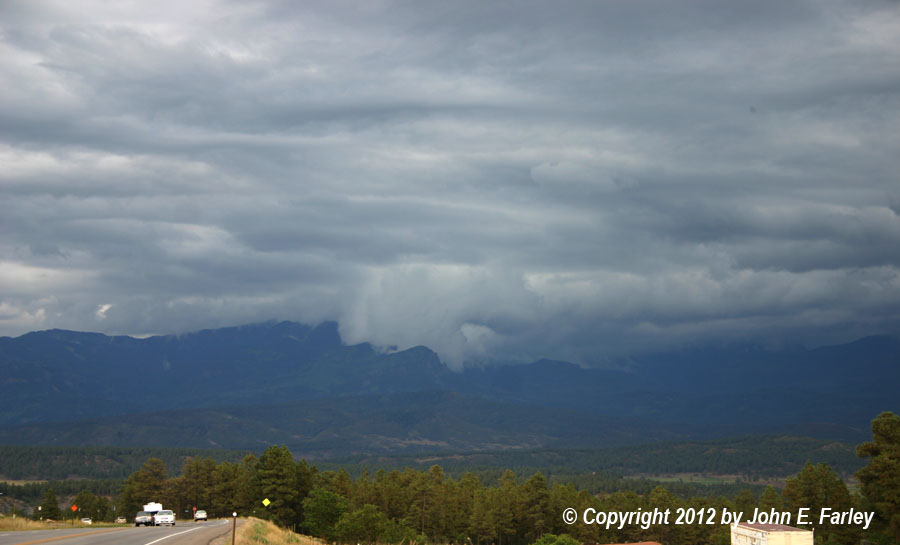 You see lots of features like this when you get strong storms in mountainous areas due to the effects of the mountains on near-storm wind flows, and of course the mountains often either trigger storms or intensify ones that have already formed as air flowing toward the mountains is forced upward.