Early this afternoon, a long-lived, bowing line of thunderstorms (in meteorological jargon, a bow-echo MCS [meso-convective system] was approaching the St. Louis metropolitan area. The storms originally developed near Lawrence, KS, where they caused wind damage around 6 a.m. Later, between 6:30 and 8 a.m., the storms resulted in a number of additional wind damage reports around the Kansas City metropolitan area. As I write this around 9:15 p.m., more than 15 hours after the storms began, the storms are still going and still generating severe thunderstorm warnings, in middle Tennessee southeast of Nashville, with the leading storms now crossing into northeast Alabama.

Anyway, I decided to head out just before 1 p.m. to meet the storms as they crossed the Mississippi River from MO into IL, thinking there might be a decent shelf cloud. Very soon after I left, I heard about a severe thunderstorm warning for about the southern half of the St. Louis metropolitan area - pertty much everywhere south of the apex of the bow. I was about 6 miles north of the northeast corner of the warning area. I intentionally placed myself north of the apex of the bow, figuring that any remote chance for a tornado to spin up would be near or north of the apex, as is typically the case with bow echo storms. These storms account for up to 40 percent of Illinois tornadoes, but the dynamics today were a little too weak for this to be likely. Still, there had been a couple mesovortices along the leading edge of the storms north of the apex strong enough to trip the mesocyclone algorithm on GR-level 3 radar, so I thought that was a good reason to position myself north of the apex, even though the strongest part of the storm was near and south of the apex. I stopped on Poag Road about a half mile east of the Mississippi River, and watched the storms cross into Illinois. I was not disappointed in my hopes of seeing an impressive shelf cloud. This picture was taken looking west, while the storms were still in Missouri: 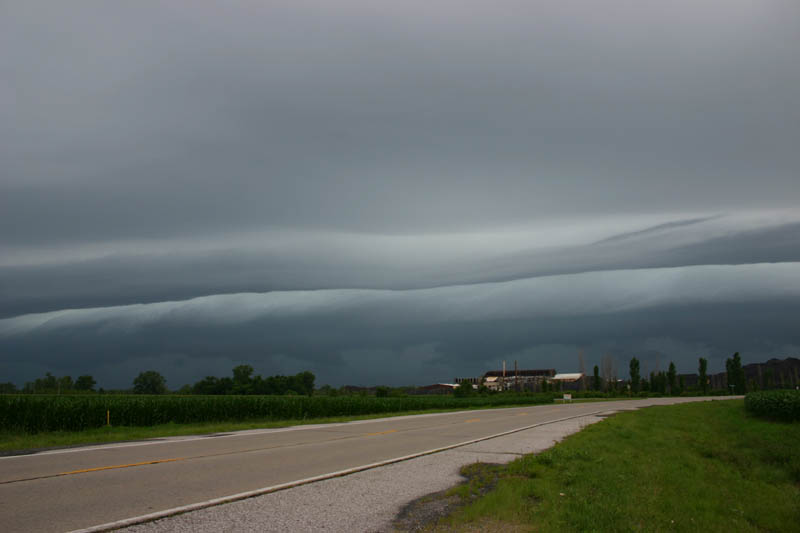 It only got better as the line of storms got closer: 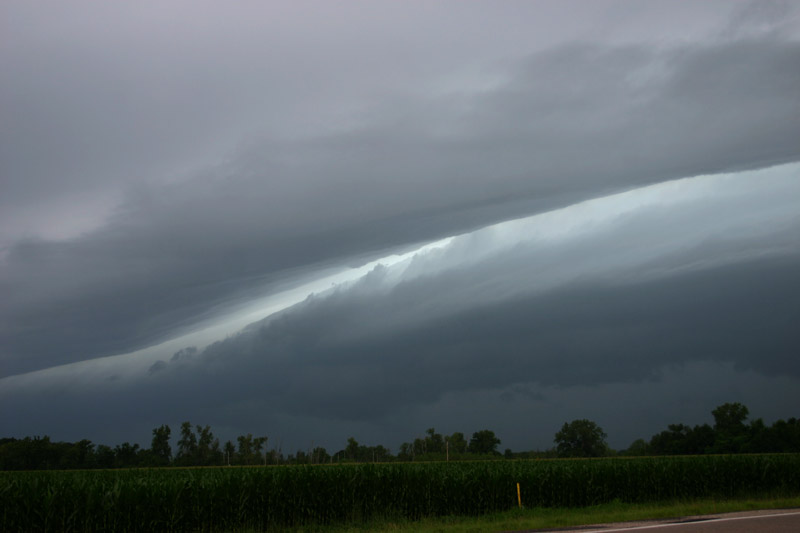 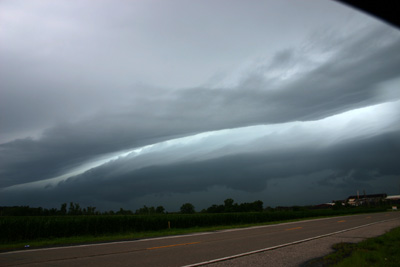 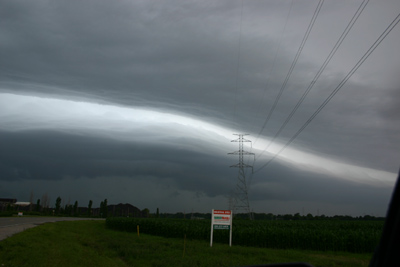 Here is a rather mediocre attempt at a panorama merge, but at least it gives you a sense of the whole picture of the spectacular shelf cloud I was viewing:

As the shelf cloud began to move overhead, I retreated back to the SIUE campus and found an open spot in a parking lot to let the storm pass over. Although the rain was torrential, the wind at that location was only about 35 mph peak. There were a few close CG strikes, though. All of the severe weather was south of the apex, expecially near the Six Flags amusement park, where trees up to 3 feet in diameter were downed and a large tree fell onto I-44, creating a large traffic backup.

Just before 1 p.m., as the wind damage was occurring near Six Flags

Around 1:30, about when I took the pictures above