On the afternoon of July 5, 2022, a cluster of strong thunderstorms developed near Chaco Canyon in northwest New Mexico a little before 3 p.m. in a plume of deep moisture associated with the Southwest Monsoon. From there, the storms tracked slowly to the NNE, passing just west and north of Dulce, NM and eventually just east of Pagosa Springs, CO, and on through the Wolf Creek Pass area, where they produced around an inch of rain. Over the course of its life, this cluster of storms led to three National Weather Service special weather statements, one for parts of San Juan and Rio Arriba Counties in NM from the Albuquerque NWS office, and two for parts of Archuleta County, CO from the Grand Junction office. These statements mentioned the possibility of wind over 40 mph and 1/4 to 1/2 inch hail, along with very heavy rain. I was tracking the storms with radar and the lightning tracker, and could see that there was a lot of lightning, so I decided to head out for some lightning photography. Despite the great early start to the Southwest Monsoon season precipitation-wise, there had not been a lot of lightning photo ops up to this point. Even with more than 4 inches of rain in Pagosa Springs, CO since the monsoon began in mid-June, the majority of the precipitation we had in the Pagosa Springs area was of a stratiform nature. But with this cluster of storms, the lightning photo ops came on in a big way.

I decided to head south on S. Pagosa Blvd. past the hospital and jog over to Trujillo Road (CR 500) from where the pavement ends on S. Pagosa Blvd, to continue south on Trujillo Rd. I figured this would bring me close to or just west of the track of the storm. As I passed the hospital, I saw a distant bolt of cloud-to-ground (CG) lightning, which gave me hope. I continued south on Trujillo Road to a mile or two north of the Acrhculeta County landfill, watching the storms as they moved over the Archuleta and Montezuma Mesas and Bridge Timber Mountain, to my south and southeast. I set up my camera with the lightning trigger, and over the course of my watching the storms, it triggered more than 100 times. Many times the timing was off or the lightning was out of the frame, but I got somewhere in the range of 25 shots with some lighting in them, including several I am very happy with. By far my best lightning photography outing this year, and one of my better ones ever. Here are a few pictures of the lightning: 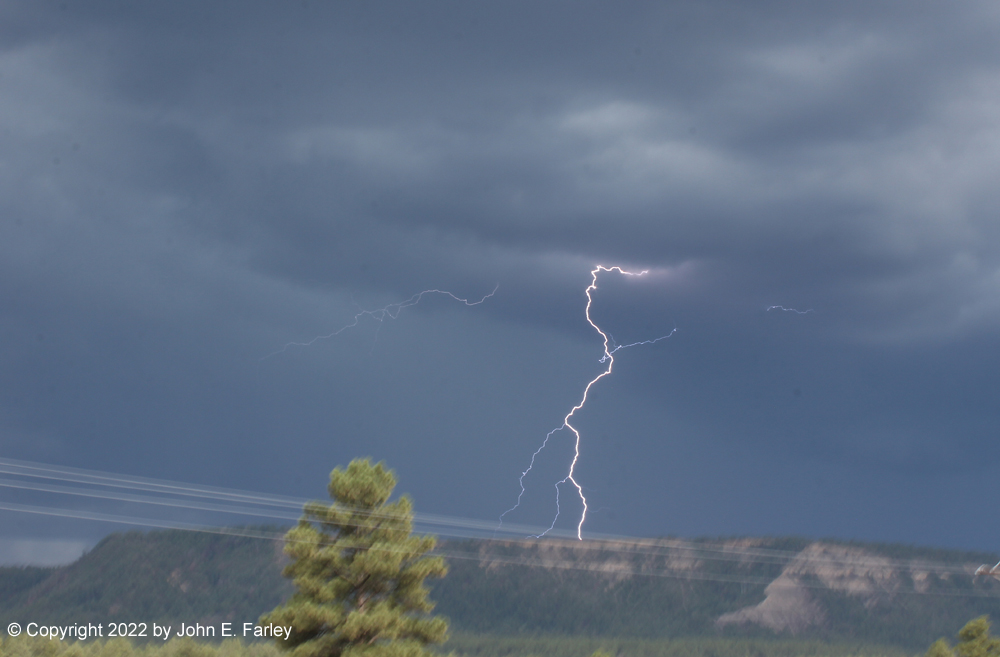 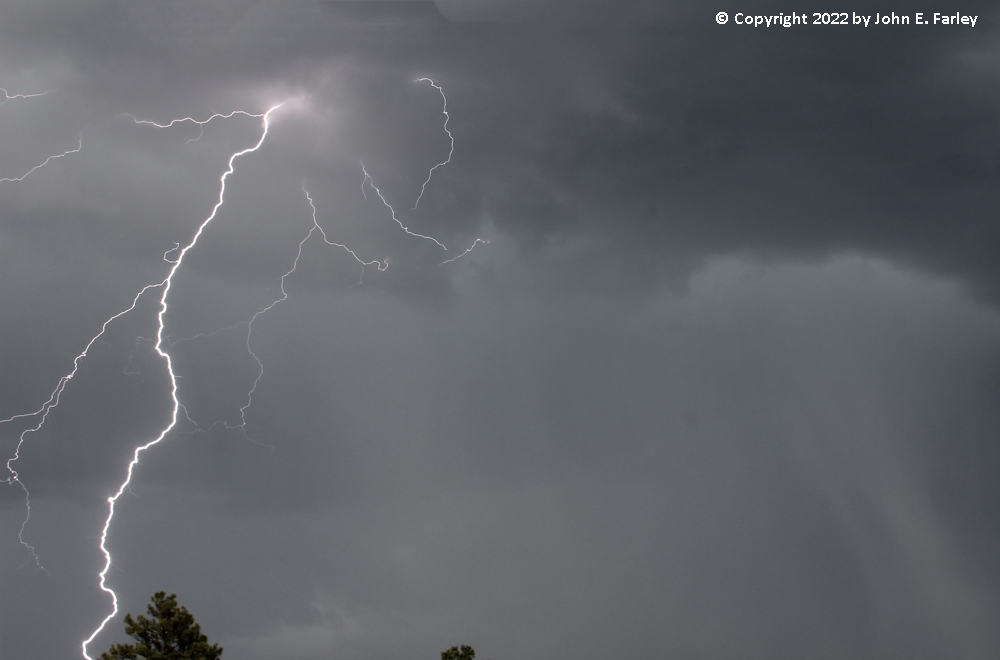 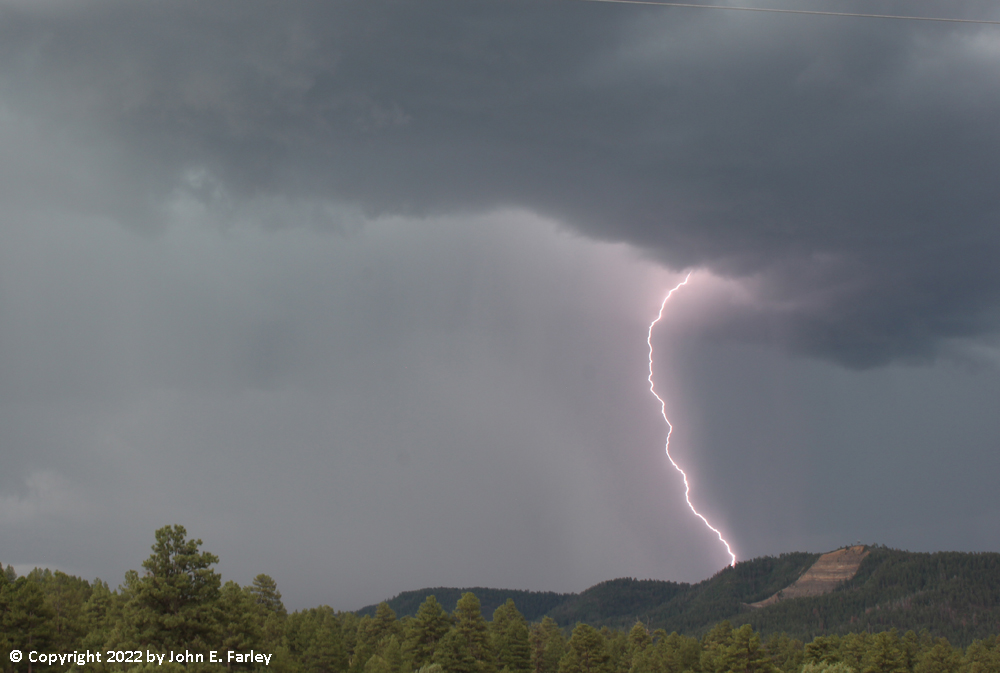 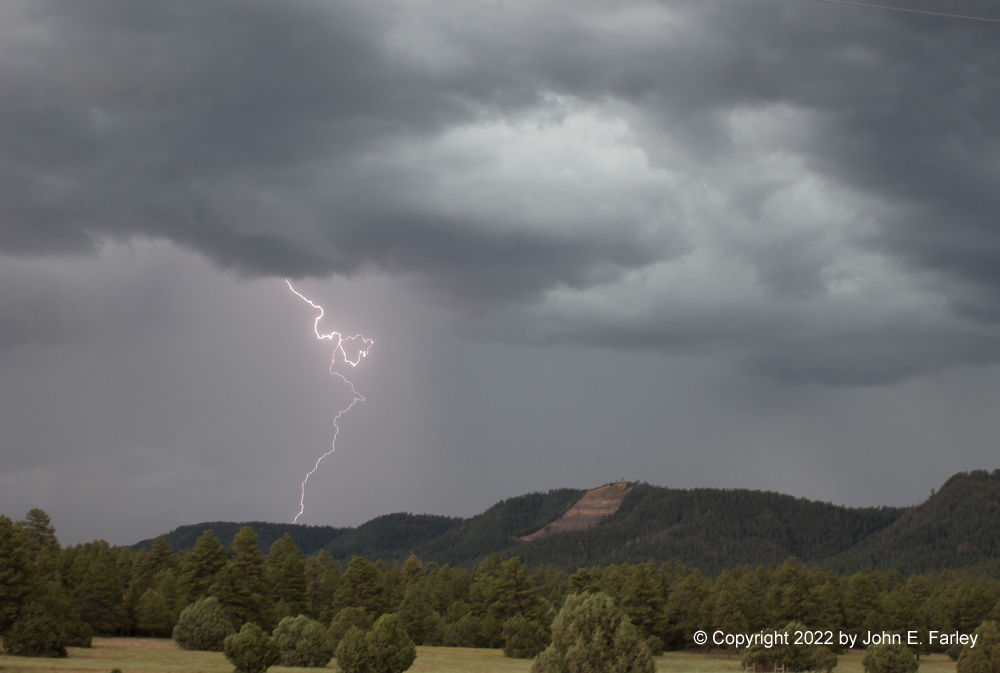 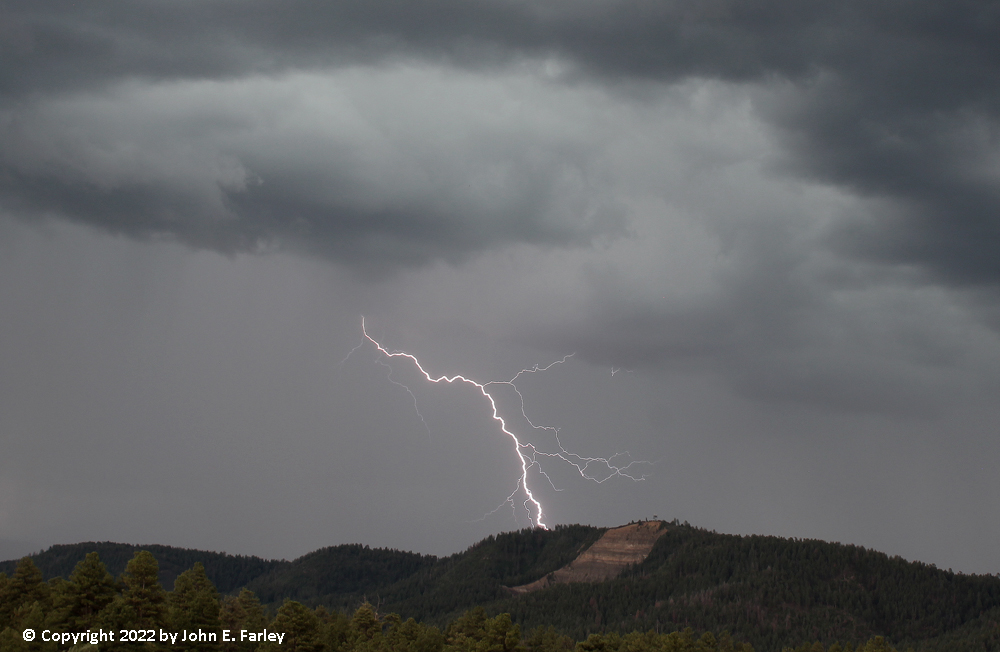 By somewhere around 6 p.m. or maybe a little after, there was darkening updraft base overhead and I knew I was in an increasingly dangerous spot lightning-wise, and also one where it would likely soon be raining hard, so I retreated back north to a spot just southeast of the Pagosa Springs Medical Center. As I neared this area, my phone alarmed for the third of the three special weather statements, and I was noticing a couple rather impressive lowerings that formed as the storm propagated north and reintensified. Here is a picture of one of those features: 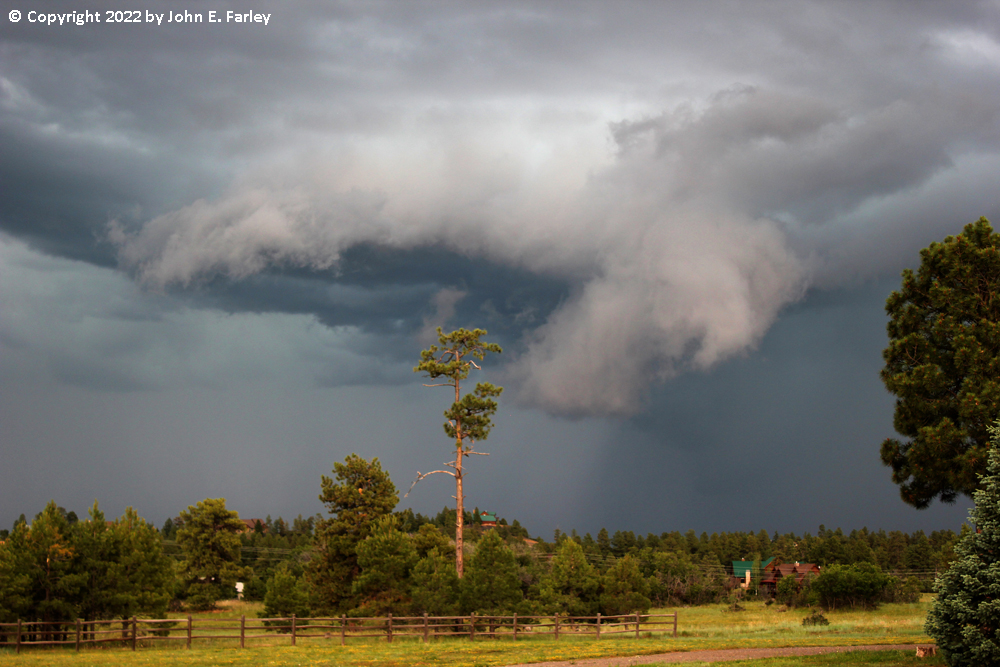 Although Pagosa Springs was included in the special weather statement, when I got home not long after taking the last picture above, it did look to me on the radar like the storm would pass just southeast of Pagosa Springs, and that is pretty much what happened. We only got a little rain, but locations a few mies east and southeast of town got .5 to .7" inches of rain, and as I mentioned, around an inch near Wolf Creek Pass. As storms continued on northeast farther into the mountains, we got a nice, albeit somewhat distant, display of sunlit mammatus: 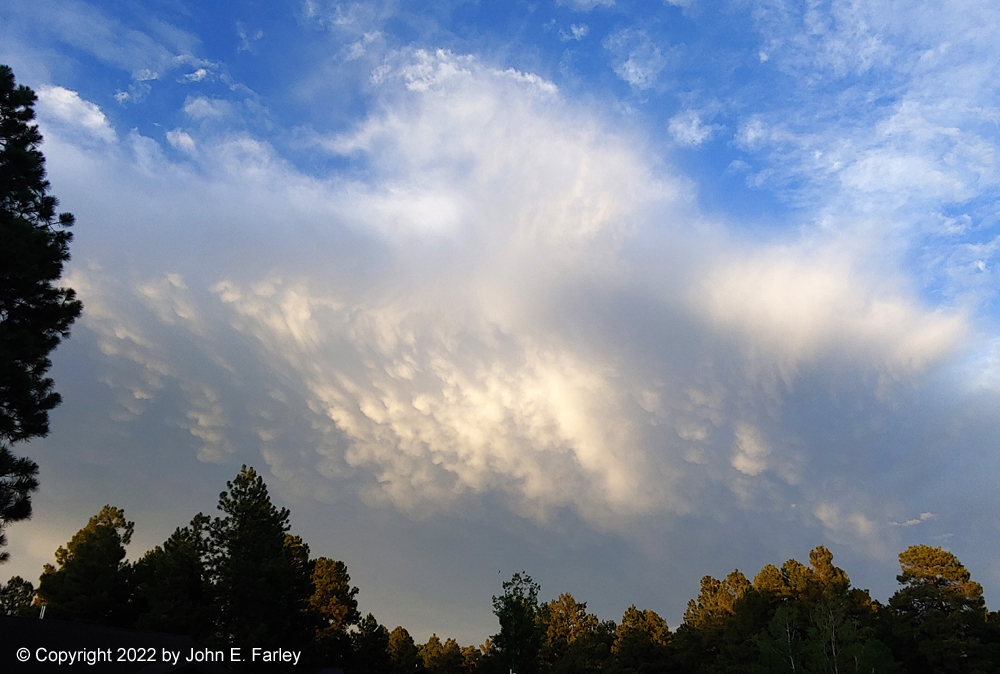