Without trying to do so, I got on (and, unfortunately, in) the best supercell I have encountered this season today, June 8. This happened in the Illinois part of the St. Louis metropolitan area in the late afternoon, beginning around 4:35. I wasn't really chasing, but rather nearing the end of the 2-day drive from Santa Fe, NM back to Edwardsville, IL. Entering the St. Louis metropolitan area from the southwest on I-44, I had noticed a nice storm going up off to the northeast. Hence, I was not surprised when the radio station I was listening to (KMOX) announced a SVR warning for north St. Louis County, MO and western Madison County, IL. But my wife and I were not really in chase mode; just trying to get home with a stop at the Edwardsville post office before it closed to pick up our held mail. As we turned north from I-55 onto I-255 in Collinsville, around 4:35, I noticed a wall cloud off to the northwest. I did not really have ready access to any of the chase gear, which was all packed away in the back of the car, and assumed incorrectly that the storms were moving to the northeast. (Unfortunately, KMOX, which once in the past used to have good weather coverage, barely mentioned the SVR warning, and did not give the storm's location or direction of movement. Instead, they seemed obsessed with updating every detail of the rush hour traffic, which is odd since there were no real traffic problems for them to report.) Based on my (incorrect, as it turns out) assumption that the storm was moving northeast, I figured we could skirt the southeast edge of the storm, and if it looked like the core was going over Edwardsville, we could skip the post office and I could go home, drop off my wife (who like me was tired from the long drive, but I am always ready to chase, no matter how tired I am), and drop south and get back ahead of the storm.

By the time we were halfway between I-55 and I-270, though, I could see that the wall cloud had become truly impressive - about halfway to the ground with the lowest point being an inflow tail that extended northeastward toward the core of the storm. At that point, it was pretty decently backlit, too. And it even began to look like an RFD was starting to cut in toward the south end of the wall cloud. But then, I could see that we were not going to make it to I-270 without getting into the core. Numerous CGs zapped down in front of the wall cloud, which was starting to get wrapped in rain, and one hit just a few hundred feet away from us in a field next to the freeway. Near or just north of IL route 162, we hit the rain and hail, and the wall cloud disappeared in the precipitation. I then turned my attention to driving through the deluge of rain and quarter-sized hail. I do wish I had had the presence of mind to grab my cell phone and snap a picture of the wall cloud before it disappeared in the rain, because it was quite impressive. Unfortunately, my cameras, along with all my other chase gear, were packed away in the back of the car. I believe we crossed about a mile southeast of the wall cloud, when it was over about Mitchell or Pontoon Beach, IL. This was around 4:40 p.m. Around this time, there were reports of nickel to quarter-sized hail around Mitchell, Pontoon Beach, and the SIUE campus. I am not sure of the exact size of the hail we were in, but I would say likely quarter or perhaps a bit larger. As we turned east on I-270 and tried to get ahead of the hail core, the rain increased dramatically, but the hail got smaller and also less of it.

We made it home around 4:55, and although the sky was brightening and there was no hail when we got home, it did start hailing around 5 and it lasted for 5 minutes, with the largest stones at our location on the east side of Edwardsville being nickel sized. Most of the hail here, though, was pea to dime size, with just a few nickel size stones. I did call in a report to the NWs of the nickel hail here, though. I also videotaped some of the hail, but the quality of the video is too low to warrant posting. Farther south around this time, the hail began to get much larger. There was a report of 1.5 inch hail in Glen Carbon a little after 5 p.m., and I saw pictures on local TV station Web sites showing 2-inch hail in Collinsville and some 3-inch stones in Mascoutah.

Looking at the radar now that I was home, I could see that the hail we got in Edwardsville just after 5 p.m. was from the westward piece of the V or flying-eagle radar echo that the supercell had now developed. Around 5:20, perhaps 40 minutes after our encounter with the wall cloud, the storm dropped a tornado in O'Fallon, which persisted southeastward to Mascoutah. Evening news reports and the live storm coverage on channel 4 showed fairly widespread damage, though it looked to be mostly in the EF0 to EF1 range. The next day, a damage survey by the NWS St. Louis confirmed a 12.8 mile tornado track with mostly EF0 to EF1 damage, but EF2 in one location where a house was destroyed. Many others were damaged to a lesser extent, with a variety of other damage such as a semi overturned; signs, trees, and powerlines downed; one car overturned, and roof damage to a school. Eyewitness accounts and the few pictures I have seen suggest that the appearance of the tornado for most of its life was that of a swirling mass of clouds with a debris swirl underneath. Although at first I heard no reports of a condensation funnel extending to the ground, there was a video shown on a St. Louis TV station the evening of June 9 that did show a cone-shaped funnel that made brief contact with the ground near Scott Air Force Base. At other times, there were reports of intermittent condesation funnels that did not appear to extend to the ground.

If I had understood the storm was moving southeast, I would not have driven where I did and would likely have avoided the hail and possibly seen the tornado. But with all the chase gear packed away and basically just trying to get home, I mis-judged the movement of the storm quite badly until it was too late. I do hope some chasers were in the O' Fallon/Mascoutah area to document the tornadoes. I did manage to get a few pictures of the storm from a distance later, such as this one: 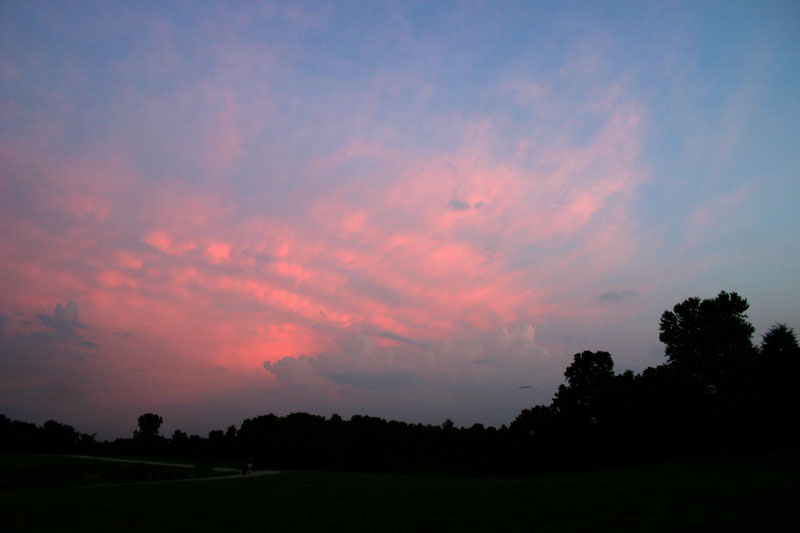 This picture was taken around sunset, with the storm perhaps 80-100 miles south. By this time, it had evolved into an HP supercell, and was also starting to become a bit more linear. Earlier on, I downloaded a couple radar loops of the storm.:

Loop 1 - From about 4:30 to about 5:15 p.m. This loop begins just before the time we turned off I-55/70 onto I-255 and toward the storm, and ends shortly after the wave of hail associated with the western piece of the V or flying-eagle echo passed over Edwardsville.

Loop 2 - From about 5:00 to 5:45 p.m. This loop begins about when the aforementioned hail began to fall at our house, and includes much of the life of the tornado, which began about halfway through the loop.

As can be seen in the above radar loops, this supercell was a bit of a right-mover, with a little more of a southerly component to its southeastward movement than most of the other thunderstorms. I also noticed that as we crossed the Mississippi River into Illinois, the wind, which had been basically southwesterly or west-southwesterly all the way from Tulsa, backed a little to a more southerly direction. This would have enhanced the directional shear in the storm's environment a bit, and may also have been indicative of some kind of boundary the storm may have been riding, which might account for why this storm produce a tornado when most of the others on this day did not.

Local storm reports for this storm from the St. Louis NWS can be found here. Although all of these reports are from Illinois, there was also some severe hail in northern St. Louis County, MO near the Mississippi River. A personal communication to me from another storm chaser indicated hail about the size of ping-pong balls just west of the river along Interstate 270.