May 17, 2021 - Rain, Snow, Graupel, and Hail, Sometimes All at Once, with Thunder and Lightning
San Luis Valley, Colorado


This day really was planned as more of a travel day than a storm observation day, as I was headed back to Pagosa Springs, CO after two successful days of chasing on the eastern plains of CO and a little bit of NM on the Raton Mesa. But the storms cooperated, forming along my route and giving me another interesting and unusual day of storm observation. This day did not appear to have as much severe weather potential in Colorado as the previous couple days, as the temperature was lower and the instability would be somewhat less, as the surface low that had been hanging out near southern CO and northern NM the previous day pushed southeast into NM and the best jet dynamics in the upper trough shifted SE to Texas. But there was still plenty of moisture, which would run up against the mountains, and flash flood watches were issued by the Pueblo NWS for much of the mountainous terrain and also parts of the plains. Additionally, as the low shifted eastward, more moisture would be pumped to the west over the mountains, so storms would be possible in the San Luis Valley and westward across the San Juans, with snow possible in the highest elevations, particularly the San Juans, per the forecast.

As I headed from La Junta to Walsenburg on route 10, I could see that storms were already going up along the east slopes of the Sangre de Cristo Mountains. And it looked like they were strengthening, as overshooting tops were evident: 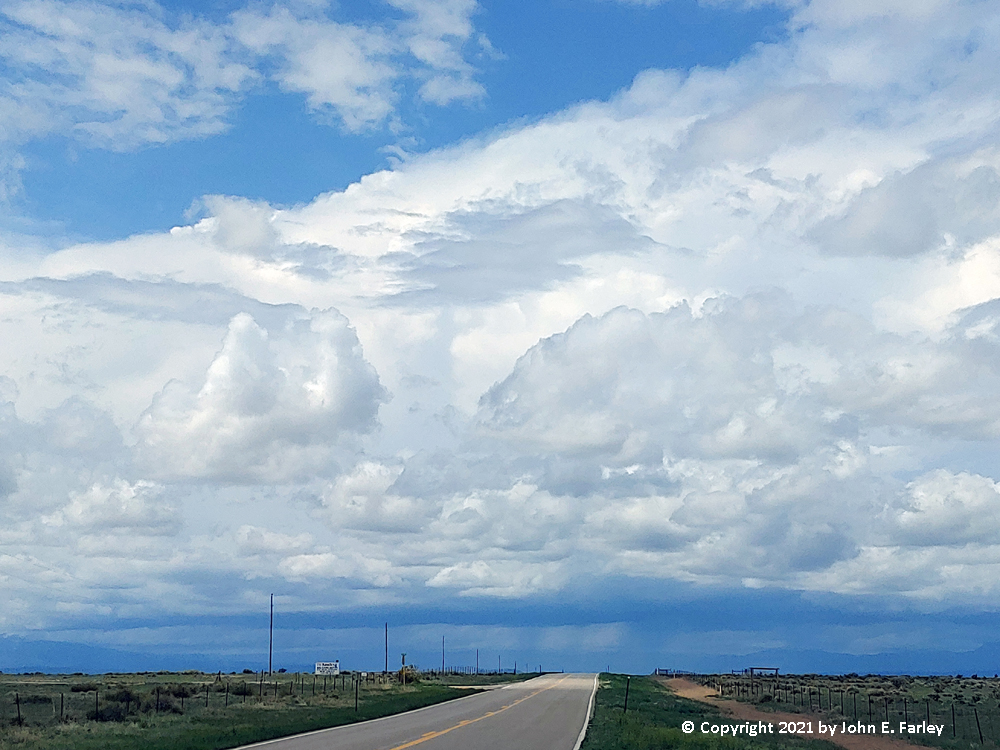 And these storms had initiated well before noon, 11 a.m. or earlier, and when I took the picture above it was still before noon. And it was also becoming evident that the storms were developing heavier precipitation cores, just on the east side or east slopes of the mountains: 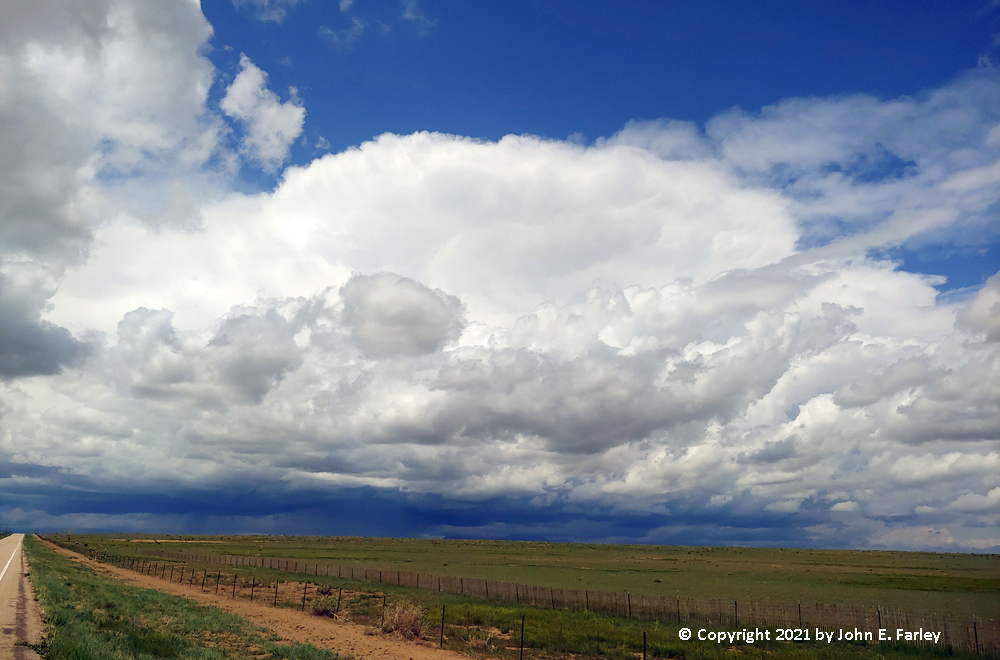 After grabbing lunch to go at a convenience store in Walsenburg, I continued west, now on U.S. 160 toward La Veta Pass. I stopped a couple times to watch the storms, now just to my northwest, and tried to get some of the occasional CG lightning bolts with my lightning trigger. One struck about a mile from me and the camera triggered, so I thought I had success, but somehow the camera missed the bolt. As the storm was continuing on to the north, I resumed my travel. After a few miles, I think a little past (west of) the turnoff for Cuchara, I noticed a snowplow coming the other way. It was there to clear a swath of hail from the highway, that had caused a car to go in the ditch. Traffic was too heavy to stop for pictures or to determine the size of the hail, especially with slippery conditions, so I just kept going. The swath of hail was pretty narrow, probably under a mile, but in it the ground was whitened and it had obviously accumulated enough to cause problems. Also gave the snowplow a nice warm-up for what was on the way - more on that later.

As I crossed over La Veta Pass with the temperature now in the mid-40s behind the storm, light rain was falling, and it mixed with a little wet snow. Once I got over the pass, the temperature remained cold down in to Fort Garland, and intense, cold outflow was blowing to the southwest from the storm. I could see large clouds of dust being lifted to my southwest, but it was too far away to get good pictures of it. Also coming down the west side of the pass I encountered a small thunderstorm with briefly heavy rain, mixed with a little hail or graupel.

Continuing west toward Alamosa, I could soon see that another line of thunderstorms was going up to my west, likely somewhere just south and west of Alamosa at that time - probably going up on the still very strong outflow from the storms over the mountains to the east and northeast. But these storms looked different from the earlier ones - the precipitation coming out of the cloud base had a wispy look, typical for snow or graupel (snow pellets), rather than the straight shafts you see with rain: 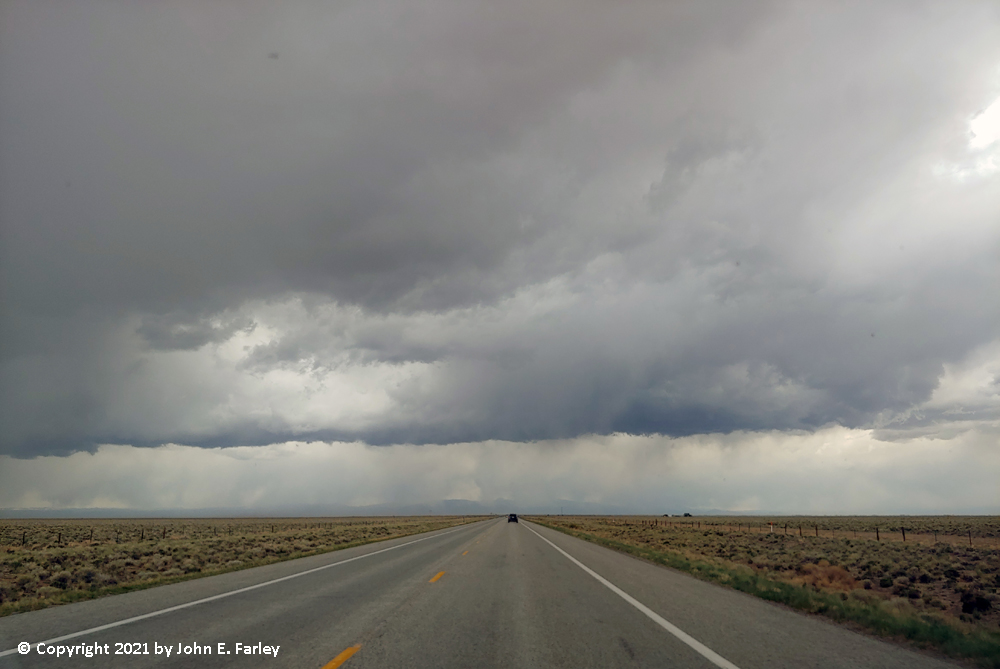 This became more evident as I got closer to Alamosa: 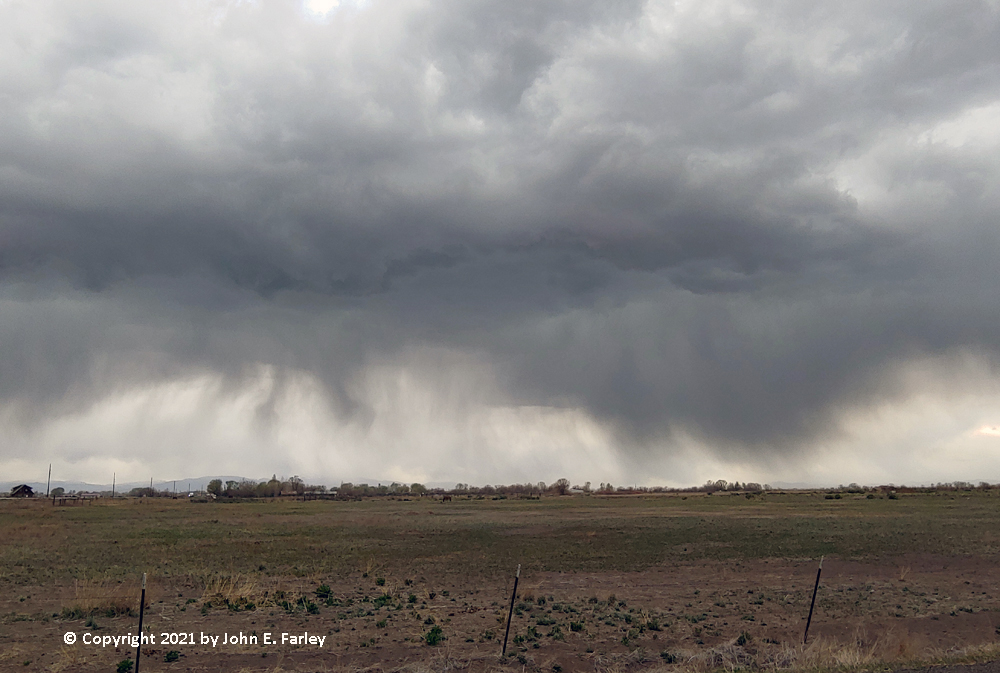 Every time I stopped to take pictures between Fort Garland and Alamosa, thunder was rumbling in the clouds overhead, and doing so pretty frequently. I knew I was going to be in for an interesting storm now, likely including winter precipitation, though maybe mixed with rain, along with thunder and lightning. What I did not know was that the NWS had already begun issuing special weather statements for these storms, for the potential of small hail and strong winds. One issued for the north part of the San Luis Valley, north of my location, even mentioned the possibility of funnel clouds and a brief tornado, as they later would for closer to Alamosa as well. I never saw anything of that nature, but there was a rather nastly looking, ragged, slightly lowered section of the updraft base just south or southeast of Alamosa: 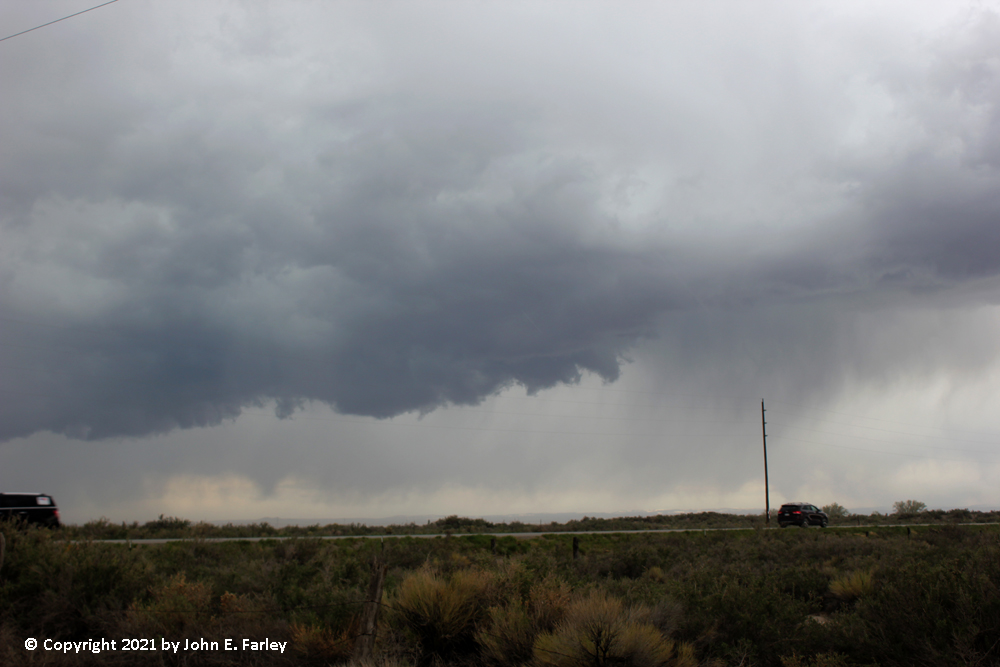 After getting these pictures, I continued on into Alamosa, figuring I would arrive about the time the storm did and could find a safe spot to stop in town, away from traffic, to get video of what looked like the near certainty of winter precipitation with thunder and lightning. As I got to the edge of town, a mix of rain and graupel and/or ordinary snow began to fall. I began to record the storm through the windshield. I drove a ways to find a good place to stop and roll down the window to get better video, and by the time I did, rain, snow, graupel were coming down, with lightning and thunder. The first place I stopped, though off the highway, still had a lot of traffic, bringing unwanted background noise to my video. So I paused the video and moved to a quieter place in a residential neighborhood. The storm continued to produce its wintry mix this entire time, with the temperature on my car thermometer plunging from the low 60s just before the storm down into the 40s. Shortly after I resumed the video, some hail began to mix in, and for a short time 1/4 to 1/3 inch hail became the predominant precipitation type, though still with some rain, snow, and graupel mixed in. Then the hail stopped and it went back to rain, snow, and graupel (snow pellets). The storm lasted for more than 20 minutes with lots of lightning and thunder throughout the storm, covering the ground and parked vehicles with snow and hail, despite the rain that was mixed in. This was one of the most unusual storms I have ever seen - rain, snow, graupel, and hail all at once, with thunder and lightning. Also some pretty good wind from the southwest at the start of the storm, despite the strong northeasterly wind that had still been blowing at my last stop before I got in town. Here is some video of this most unusual storm:

I noticed that the car in front of me had an accumulation of slushy snow and graupel/snow pellets on it, with some of the hailstones embedded in the slush on the car: 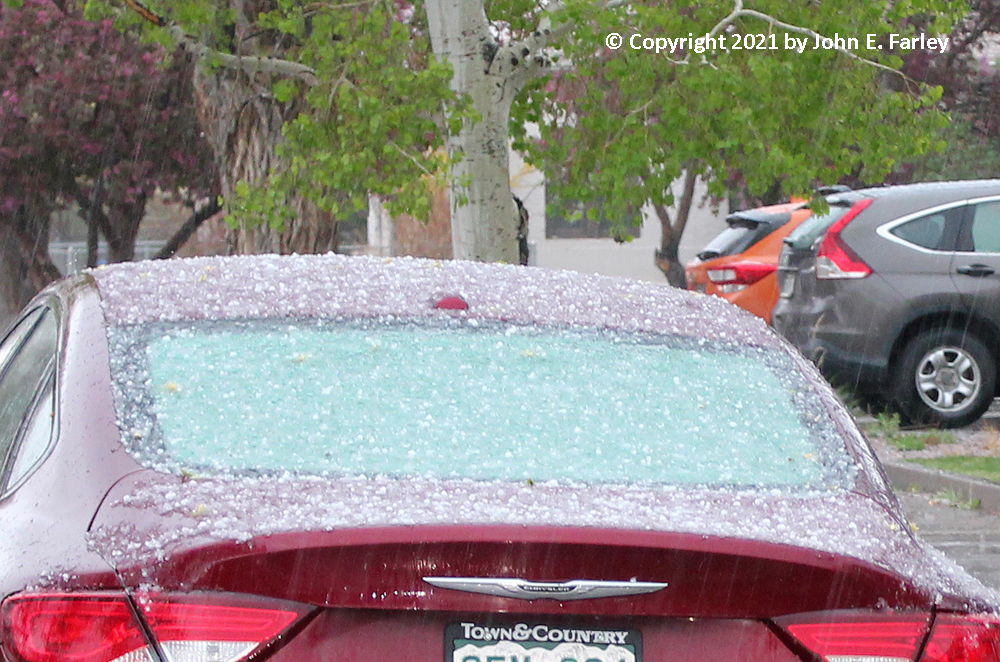 Normally, hail would bounce off the car and accumulate on the ground - but with the slushy snow accumulation on the car, it just stuck in the slush. By now the storm seemed to be mostly over, so I began again on my way. The storm in Alamosa lasted from around or a little after 1:45 to around 2:10. As I left Alamosa, the temperature on my car thermometer was down to 43 degrees, in contrast to 62 just before I entered the storm.

During a brief stop in Monte Vista, the next town around 15 minutes west of Alamosa, I noticed that a special weather statement had been issued for the area just east of Alamosa. Unlike the earlier one for Alamosa, which I had not seen, this one mentioned the possibility of funnel clouds and a brief tornado, similar to the earlier statement for areas to the north of Alamosa. Being that close still, I did not want to miss even a remote chance of a tornado, so I turned back and went back to just east of Alamosa. There was quite a bit of hail and maybe snow or graupel on the ground where I stopped a couple miles east of town, and heavy precipitation to my north and east - but no updraft base that looked as interesting as what I had seen earlier. So after watching a while, I resumed heading to the west for home.

However, this was still not the end of interesting weather in this area. Into the night, and in some places, the next morning, as this line of storms and others moving up from New Mexico moved into Colorado's Sangre de Cristo Mountains, the precipitation became all frozen precipitation, with heavy snow accumulations. So much so that CDOT had to close La Veta Pass, as discussed in this link.

The yellows and oranges are in the Sangre de Cristo and San Juan Mountains, reflecting accumulations of 6-12 inches. There was a report of 7.5" on the east side of La Veta Pass, but no doubt some locations in the mountains got quite a bit more. Note also the blue in the area between the two mountain ranges on the image above, reflecting minor accululations in the San Luis Valley, like I observed during the storm in Alamosa. All and all, pretty darned interesting weather on what I had planned to just be a travel day.