Not sure whether to put this in the Winter Weather observations or Severe Weather Observations sections of my Weather Webpages, since it involved some of both. Maybe I'll just put it both places, LOL!

From Friday night, April 13 through Sunday night, April 15, a major winter storm affected much of Colorado and parts of northern New Mexico. Accumulations in excess of 20 inches of snow were fairly common in the highest elevations of the Colorado Rockies. Despite the mid-April timing of this storm, accumulating snow occurred even in the valleys of the mountainous regions of the state. I was pleased because this storm afforded me the opportunity to stretch my ski season and get a couple more days of skiing at Wolf Creek, which received 16 inches of snow from Friday afternoon through Sunday morning. Here is a picture I took at the ski area during a period of heavy snow the afternoon of 4/14, when 4 inches of snow fell in about two and a half hours. During the evening a heavy snow shower passed over Pagosa Springs, where the elevation ranges from around 7100 to 7600 feet, dropping a couple inches of snow in a couple hours - picture here. Until late Sunday afternoon, this storm was a fairly typical winter storm event for this area, although fairly intense for so late in the season, with all the precipitation in the form of snow, albeit a lot of it in some areas.

However, some much more intense convection began to develop in western Colorado late the afternoon of Sunday, April 15. The NWS office in Grand Junction, in an area forecast discussion that afternoon, noted the presence of unusually high lapse rates of 9-10 degrees celsius per kilometer across western Colorado and eastern Utah. In other words, the air got much colder as you went higher in the atmosphere, meaning that relatively warm air near the surface could rise very rapidly once convection began to occur, producing strong updrafts. This was due to very cold air aloft, as the surface temperatures in the mountain valleys were only in the upper 30s to lower 40s. For a wintry day with temperatures that cold at the surface, the air was also quite unstable, with CAPE around 300-400. By the standards of thunderstorms in warm air masses this isn't a lot, but for a relatively cold environment, it is quite unstable. After enjoying a second day of skiing fresh snow at Wolf Creek, and enjoying scenes like this and this, I dined in Pagosa Springs with my wife and was amazed to walk out of the restaurant around 6:30 p.m. and see this: 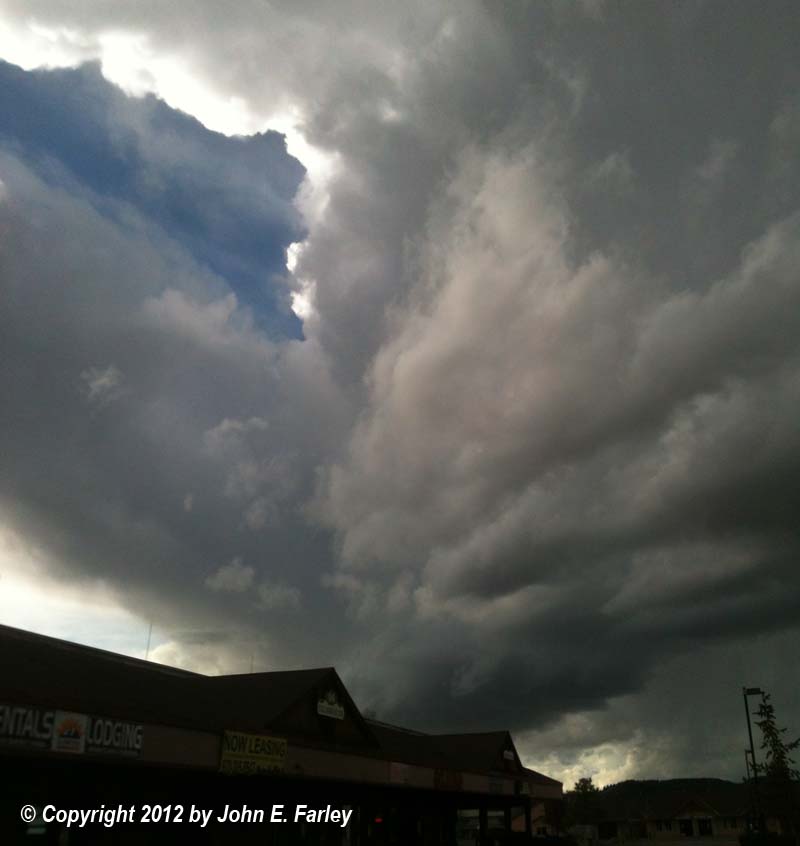 When I saw that, I knew that, although the temperature was only 42 or 43 and all the precipitation with this system, even in town, had been of the frozen variety, this was no ordinary convective snow shower. Instead, this storm had the appearance of a supercell, and it may indeed have had some mid-level rotation, as the surface winds were westerly or southwesterly, the midlevel winds northwesterly, and the upper winds northerly - good directional shear, in addition to the aforementioned steep lapse rates and decent (for a cold-air environment) instability. But when I took this picture, the temperature was only 42 or 43 degrees - certainly not what you associate with supercells. Right away, I knew I had to observe this storm! Since it was moving toward the southeast, I decided to head to the east edge of Pagosa Springs, about 3 miles east of where I took the picture above looking mainly to the north. At the east edge of town around 7, I was treated to this: 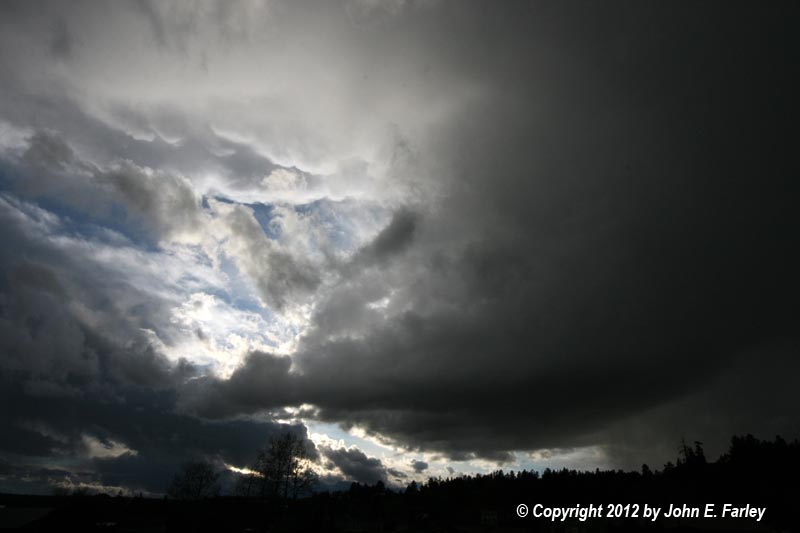 This picture was taken near the east edge of Pagosa Springs, looking northwest at the updraft base of the southeastward-moving cell. Note the knuckled anvil! This picture was taken about 100 feet from where I would later photograph quarter-sized hail. Shortly after this picture was taken, a little small graupel began to fall, mixed with a few wet snowflakes and maybe a few raindrops. I watched this for a while, and it appeared the updraft was going to pass directly over my position. I noticed increasing precipitation a little farther east, so I decided to re-position a mile or so east of town to see what kind of precipiation was falling. Turned out to be a lot of pea sized graupel (snow pellets), but after a few minutes the sound as they hit my car changed and became louder, as they got harder and bigger, to the size of dimes (.7 inch) around 7:30 p.m. At this point, it was becoming apparent that the precipitation type was becoming a mix of graupel and hail. The difference of the two is that graupel is produced through a process called "dry accretion," in which rime accumules on what started out as a snowflake. This occurs when supercooled water droplets in the cloud (i.e. tiny droplets which maintain a liquid form even though they are cooled to or below 32 degrees) freeze onto a snowflake. This gives the graupel particle (snow pellet) a quality somewhat like a small chunk of styrofoam - chunky but not real hard and solid. In contrast, hail occurs through a process of "wet accretion," in which water accumulates on the snowflake in a part of the cloud that is above freezing then is lifted by an updraft to a level where it freezes into hard ice. The larger chunks I observed - dime-sized at this point, but later, on the ground, up to the size of quarters, seem to have been something of a hybrid of graupel and hail - they started out as graupel, but seem to have then gone through some melt-freeze cycle that gave them the harder, heavier, and larger quality of hail. Here are a couple pictures of the pea-to-dime-sized graupel and hail on the ground: 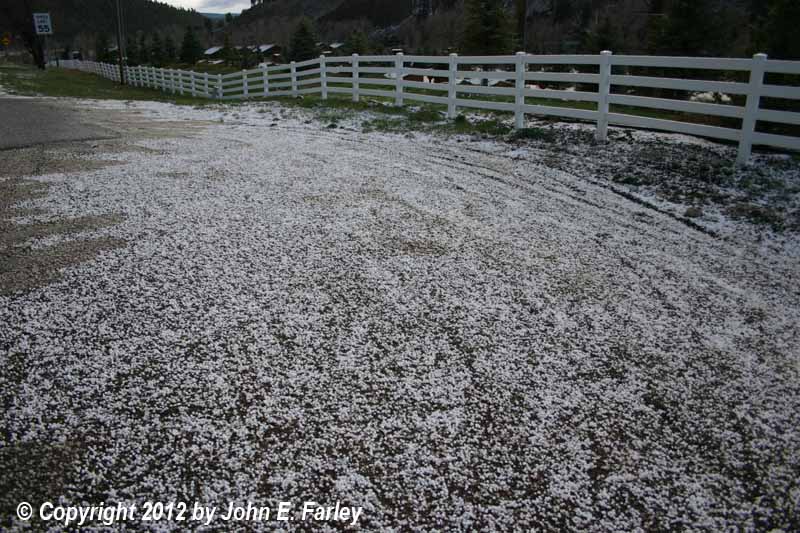 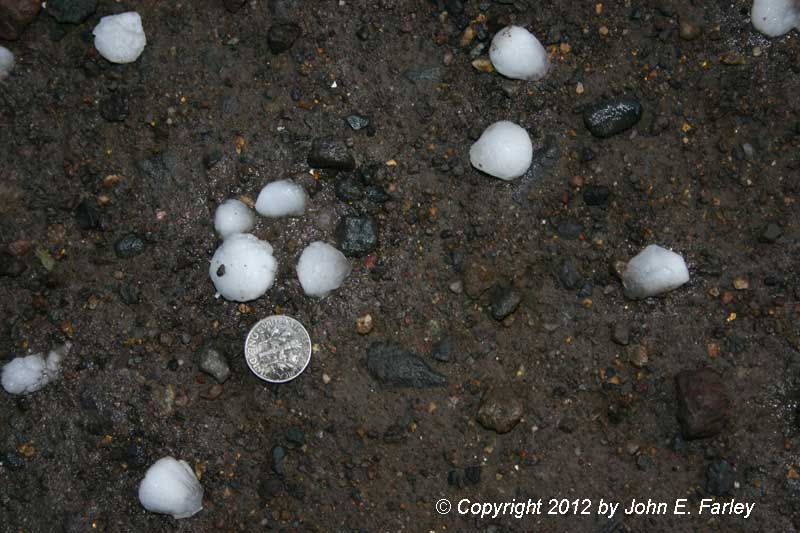 When the precipitation subsided, I headed back into town. About 100 feet east of where I had stopped earlier near the east edge of town, I noticed hailstones up to the size of quarters: 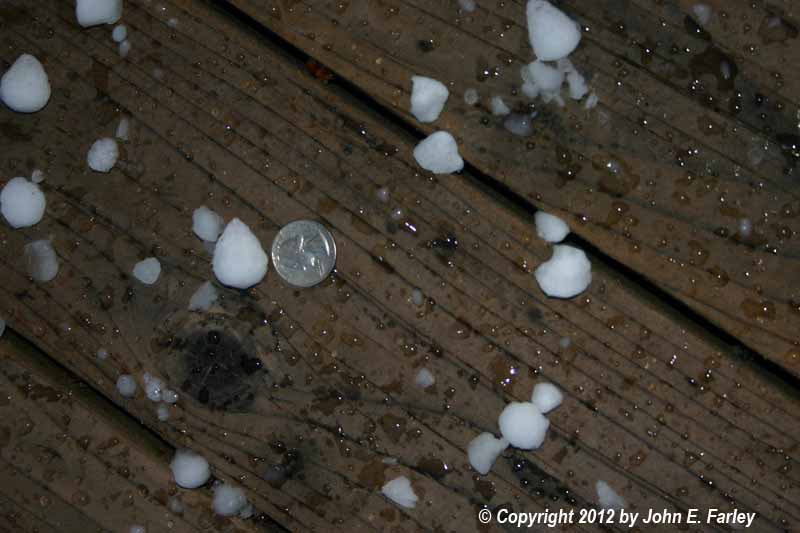 This meets the National Weather Service definition for severe hail - 1 inch in diameter! Interestingly, despite producing hail large enough to be considered severe, this cell produced no thunder or lightning that I observed, although I suppose there could have been some that I missed. The temperature was around 39 when I took this picture. I've always wondered whether it is really possible to get snow and hail in the same storm - thought I saw it once a couple years ago between Santa Fe and Albuquerque, but now I know it's definitely possible. Severe hail, even, as the picture above shows.

After photographing this hail, I noticed that another intense cell was passing about 10 miles to the west of Pagosa Springs. This one seemed to be producing heavier precipitation than the first one, so I headed west to investigate. About 10 miles west of town, I encountered an intense burst of what appeared to be mainly graupel, which quickly covered the ground and roads and made the roads quite slippery. Most of the graupel was pea-sized, but there may have been some chunks as large as dimes. From the sound of it, I think it was mainly graupel, although there could have been a little hail mixed in. This occurred around 8 p.m. After that, I started back toward Pagosa Springs, and after a mile or so the precipitation change to all or mainly ordinary snow. Lots of snowflakes coming down, but no longer the sound of them hitting the car as was the case with graupel. As this occurred, the temperature quickly dropped to 34 degrees - about 5 degrees colder than I had observed with the earlier graupel and hail.

I ran out of the snow just west of Pagosa Springs, and although it was nearly dark now, I could see the updraft of a third cell just to my north as I reached the west edge of Pagosa Springs, about 3 miles east of where the quarter-sized hail had fallen earlier. I hit a little pea-sized graupel, but since it was dark I did not continue east to investigate. After a few minutes, it began to lightning and thunder quite frequently from this third cell, with most of the flashes within a mile or so from my location near the west edge of town. I later found out that this third cell produced a one-to-two inch accumulation of graupel and/or hail around downtown Pagosa Springs, much of which was still there when I drove through town more than 12 hours later the next morning. In terms of the amount of precipiation produced as well as the presence of thunder and lightning, this was the heaviest of the three cells, but since I did not go into the core during the storm I don't know what the mix of hail and/or graupel was, nor how large it was in this cell.

Below is some video I took, mainly of the first cell that moved through but also a little of the second one. This video has 3 segements. The first shows graupel and a little snow as the first of three convective cells moved through the area. This was taken near the east edge of Pagosa Springs a little after 7 p.m. The second segment shows dime-sized graupel and hail falling a mile or so east of Pagosa Springs around 7:30 p.m. It was after taking this segment that I returned to near where I took the first segment and found quarter-sized hailstones on the ground. The third segment is of the second cell, about 10 miles west of Pagosa Springs around 8:15 dropping a heavy shower of pea-to-dime sized graupel. Here is the video: