With a slight risk and 2% tornado outlook from SPC for the easter tier of counties in New Mexico, I actually considered changing my plans to ski today to go storm chasing - but I concluded that with the storms in eastern NM likely to line out quickly and move rapidly through areas with poor road networks, it would be better to stick with skiing. And besides, there was every chance that I could combine skiing with a little impromptu storm observation, since conditions were about as favorable as I have seen for thundersnow. The same pacific front that would create the potential for severe weather in eastern NM would also produce strong forcing in the vicinity of the mountains of northern NM, and with the combination of forcing and speed shear, the likelihood of thunderstorms would be good - and any precipitation at Ski Santa Fe, where I planned to ski, would almost certainly be snow, since the elevation of the ski area ranges from 10,350 to 12,075 feet. Since it had not snowed much for more than a month and the snow was getting crusty, I waited until mid-day, when the potential for fresh snow would be increasing, to head up to ski. I also watched radar (which showed a growing cluster of intensifying snow showers in west-central NM) and the forecast models. Both the NAM model and extrapolation of radar indicated that the snow might begin at Ski Santa Fe around 2 p.m., with intense snowfall possible between about 3 and 5 p.m.

I was out on the slopes shortly before noon. Already there was evidence the atmosphere was destabilizing, as moderate cumulus with pileous caps were forming over the city of Santa Fe, to the southwest of the ski area. By a few minutes later, around noon, some very impressive (for winter, anyway) towering cumulus were visible to the northwest:

I stopped for a late lunch around 1:15 or 1:20, and at that time, I noticed an evident line of convection to the west of the ski area. The tops of the clouds were clearly glaciated: 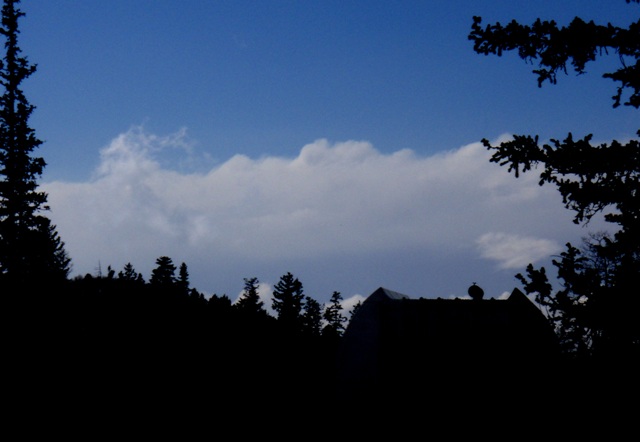 By the time I got back out from lunch around 1:45, the convection was approaching. A cell ahead of the main line appeared to be developing a few miles south of the ski area, near the south end of the Sangre de Cristo Mountains. Undoubtedly, this development was being helped along by orographic lifting (air being forced up by the mountains). At the same time, the leading edge of the main convective line was beginning to come out of the Jemez Mountains to my west and move across the Rio Grande Valley. I thought the line might be about to catch up to the cell forming to my south, but they turned out to be a little more separated than I realized. I skied down from the 11,250 foot level where these pictures were taken, and by the time I got back up the lift a little after 2 p.m., heavy snow had begun: 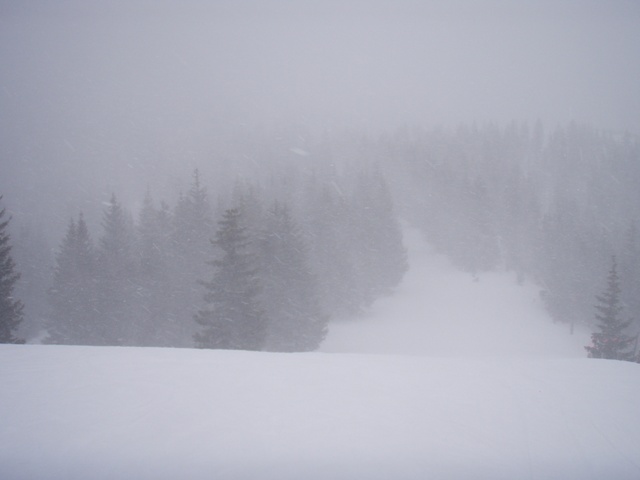 I skied down in the heavy snow to another lift that goes to the top of the mountain, but serves relatively protected runs that would not be too subject to wind-driven snow. As I neared the top of the lift, the snow began to lighten a bit, but I heard the first rumble of thunder just before I reached the top of the lift. It sounded like it was to the west, probably associated with the main line of convection. As the first cell passed over, the snow lightned to just a little, and as I skied down I could see the approaching line of snow squalls. It had a formation along the leading edge that I would describe as a shelf cloud, much like you see with summer thunderstorms: 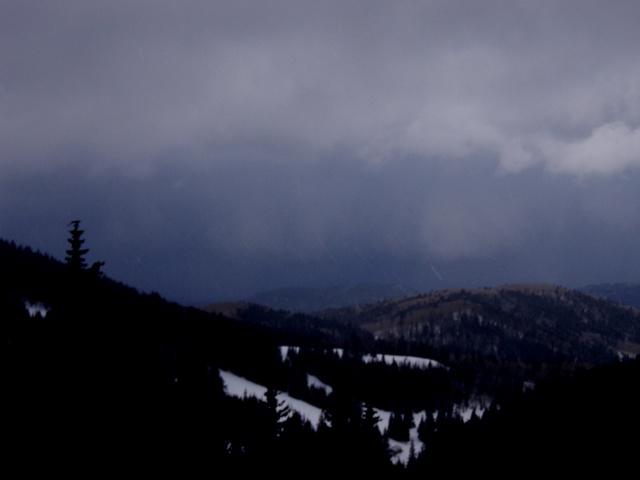 At this point, I did not want to get on any lift to the top of the mountain, but there is one that serves the lower half of the mountain that mostly goes through a narrow cut in the trees and does not to all the way to the top. I figured this one was relatively safer from lighting than the other lifts, and I had not heard any more thunder. But when I was halfway up the lift, I heard what I was pretty sure was thunder (though as is often true with thundersnow it sounded rather muffled and did not last as long as usual summer thunder), and it sounded closer than the last one. Then, another. Meanwhile, the snow rapidly intensified and again, as in the earlier burst, became mixed with graupel (snow pellets). But this time the pellets were large, around 1/4 inch in diameter. When I reached the top of the lift, I took some video of the intense snow and graupel, and just then the lift attendant told the two women who got off the chair behind mine that the lifts were closing because of the thunder, which indicated, obviously, a danger of lightning. This would have been close to 3:00 p.m. I was hoping I might catch some thunder on the video, but I was not that lucky. You can see how intense the snow and graupel were, though.

The Youtube video of the intense snow and graupel occuring at this time can be seen here.

Figuring my ski day was done, I stopped at the mid-mountain lodge for a glass of wine. The snow was so intense, I stood outside with my wine to watch it. But there was no more lightning, and about 3:40, the lifts were back open. So I headed down and got 2 more runs in, skiing the best powder I have skied this season. It was about 3 inches, all fallen since 2 p.m., and much of the mountain was untracked because most of the skiers left when the lifts closed due to lightning. It continued to snow heavily the rest of the time I was on the mountain, but after the initial burst, it was mainly snow, not graupel.