On December 15, 2021, a truly exceptional weather event occurred from CO and NM nothreastard into MN and WI. This included a derevcho that went from central and northwest Kansas all the way well into Minnesota and Wisconsin, a record number of December tornadoes in the Upper Midwest (and even a record tornado day for any month in Iowa), and a squall line that produced severe thundersnow in parts of CO and NM. It also resulted in massive dust storms in otherwise clear air in the area between where the two squall lines occurred, which cvaused wind damage and closed many miles of I-70 in Kansas.

The first of the two squall lines began around 3:00 a.m. in far southwestern Colorado and northwest New Mexico. It produced thunderstorm wind gusts of 64 mph in Cortez, CO, 66 mph in Farmington, NM, and 68 mph near Durango, CO between 3 and 4:30 a.m, then widespread wind damage as it surged eastward across northern NM and parts of CO. We were in Santa Fe at the time, and were awakened around 6 a.m. by cell phone weather alarms for a snow squall warning for most of north central NM. A second warning was issued around 6:30. While the snow squall warning generally verified only at the higher elevations, had it been a severe thunderstorm warning it would have verified in a number of areas including Santa Fe and Taos, both of which received considerable thunderstorm wind damage. As did large areas in and near the Jemez Mountains. At our location near downtown Santa Fe, the precipitation was a mix of rain, snow, graupel, and possibly hail. I also saw lightning, both out the window and on the Ski Santa Fe webcam, where the storm was accompanied by a brief but intense burst of snow. Due to the rapid movement of the squall, the intense precipiation and wind in Santa Fe only lasted a few minutes. But that was enough to produce a 70 mph thunderstorm wind gust at the airport, where a number of small planes were damaged and at least one flipped upside down. There was also damage in downtown Santa Fe, where large trees were blown down at the Cathedral and at the State Capitol. In Taos, a large radio tower was blown down, and a number of buildings had their roofs blown off. Many people were trapped in cars by falling trees, and a couple injured, in and near the Jemez Mountains west of Los Alamos. Considerable tree damage occurred in national forests in that area (including the Pajarito Ski Area) and also in and near the Taos and Wolf Creek ski areas. Peak winds exceeded 100 mph at the top of Taos SKi Valley and hurricane=-force winds also occurred at a number of Colorado locations, including the top of the Wolf Creek Ski Area. And several gusts excveeded 100 mph in the Colorado Springs area as the squall line moved through.

In some places in NM and CO the squall line produced thunder and lightning and in others it did not. And it variously produced rain, mixed precipitation, and intense snow squalls, depending on altitude. But from southwestern CO and northwestern NM across much of CO and northern NM, it was one continuous convectibvely-forced squall line, along or just ahead of the strong pacific cold front associated with the storm system. The squall line continued out onto the plains of eastern CO and northeastern NM. The precipitation eventually dissipated as the squall line moved farther east of the mountains, but the high winds continued, producing the aforementioned dust storms, and before long a new squall line formed in central and northwest Kansas that would be the beginning of the derecho, which is discussed further below. Here are some newspaper reports and images from northern NM and from CO:

From the Taos News:

Snow squalls cause widespread damage, knock out power in parts of Taos County

From the Santa Fe New Mexican: 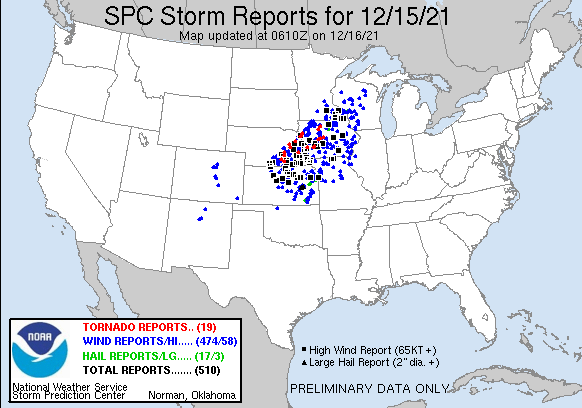 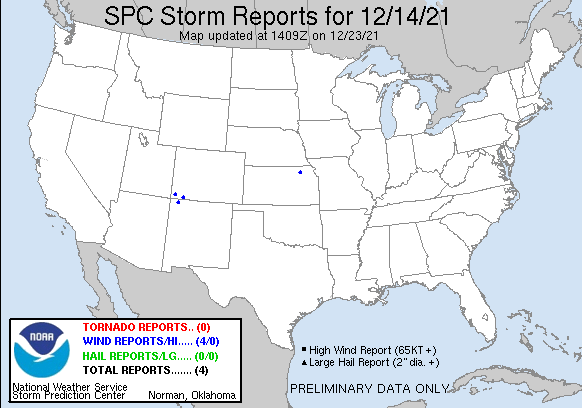 Note that these only show severe winds associated with thunderstorms. In the area between the severe thunderstorm reports in CO and NM and the area that was affected by the derecho (Kansas northeastard to MN and WI), there were also numerous high wind reports, but especially in KS, those were from gradient winds in clear air, not from thunderstorms. There seems to be a gap, albeit not a large one, between where the CO/NM squall line dissipated after coming out of the mountains (last severe thunderstorm wind report was in far southeast CO) and where the new squall line (the derecho) developed in Kansas. But if you added in all the non-thunderstorm wind reports to the thunderstorm ones, there would be a continuous swath from CO and NM to MN, WI and MI, where severe gradient winds also occurred. Also to see the full extent of the storm's impact in terms of severe thunderstorm reports, you have to look at both maps, because severe reports began before the 12z (5:00 a.m. MST) start time for the December 15 map, and so were counted as December 14 reports. Those were in far northwest NM and far southwest CO.

Once the new squall line developed in central and NW Kansas, it raced northeast across KS, NE, IA, northwest MO, southeast MN, and WI and even into the Upper Pensula of MI, producing widespread high winds, at least 91 tornadoes (a record for any day in December, breaking a revcord that had been set just five days earlier by the tornado outbreak in the mid-South and Midwest), and a few hail reports. It easily met the criteria for a derecho, produvcing damaging winds over a swath of something like 700 miles, from where it began in KS all the way to northeast WI. The squall line moved at speeds of 60 to as fast as 80 mph, covering this long distance in an unusually short time. Below are several links providing additional information on this phase of the storm:

From the Weather Channel:

One Dead in High Winds, Tornadoes That Left Trail of Damage Across Plains and Midwest>

Including both winds associated with convective storms and winds in clear air associated with pressure gradient, a pretty-much unbroken swath of damaging winds extended from southwestern CO and northwestern NM all the way northeastward to MI and northeastern WI. A New York Times article on the storm can be found by following the link below: 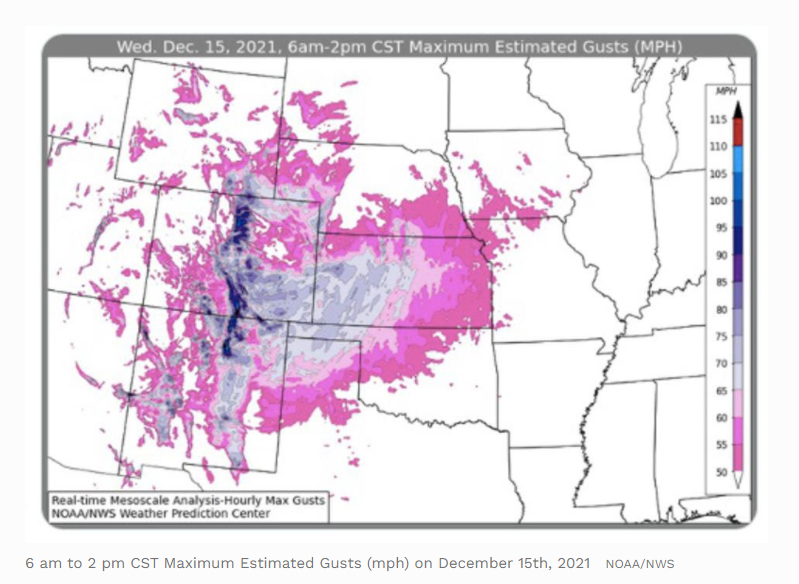 Keep in mind that destructive wind began in southwestern CO and northwestern NM about an hour and a half before the start time of this map, and continued in the Uper Midwest and Great Lakes areas for many m ore hours after the 2 p.m. end time of this map. Truly, this was an exceptional weather event!