As I worked on other things through the day, I remained mindful of the fact that, with the strong pacific storm moving in, there would be some potential for thundersnow during the late afternoon and evening hours. Through the day, there were occasional lightning strikes in parts of southern Utah, Arizona, and far northwest New Mexico and far southwest Colorado. However, most of the significant precipitation remained west of the Pagosa Springs area prior to around 4 p.m., and before that, despite occasional light rain and mountain snow, no shower of any real strength had approached Pagosa. By a little before 4, however, the lighting tracker indicated a strike not too far southwest of Pagosa Springs, and the sky was darkening. I knew it was time to grab the cameras and head out. I had only gone about two blocks when I saw the first flash of lightning, so I hustled on to the nearest place with a clear view of the sky, fortunately not far. It was quickly evident that a thunderstorm which appeared to be producing mainly frozen precipitation was approaching quickly, as lighting streaked across the sky a second time before I could set up for pictures or video. I snapped a couple quick pictures of the storm, then set up the video camera. In a short time, two more bright flashes of lightning streaked across the sky. Both were cloud-to-cloud lightning, appearing to come in and out of the cloud base near the leading edge of the precipitation. At least one was also accompanied by a cloud-to-ground flash. In some frames of my video the image was blown out by the brightness of the flashes, but I did get one good frame out of each of the two flashes (each of which appeared to involve multiple or repeat bolts). Both of these flashes were under a mile away, with the leading edge of the storm moving toward me. Here are video captures of these two flashes, in the order that they appeared: 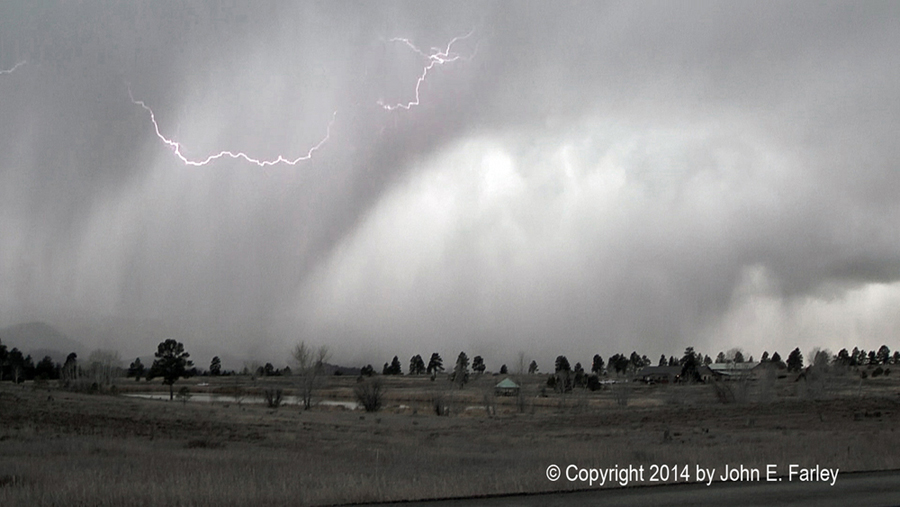 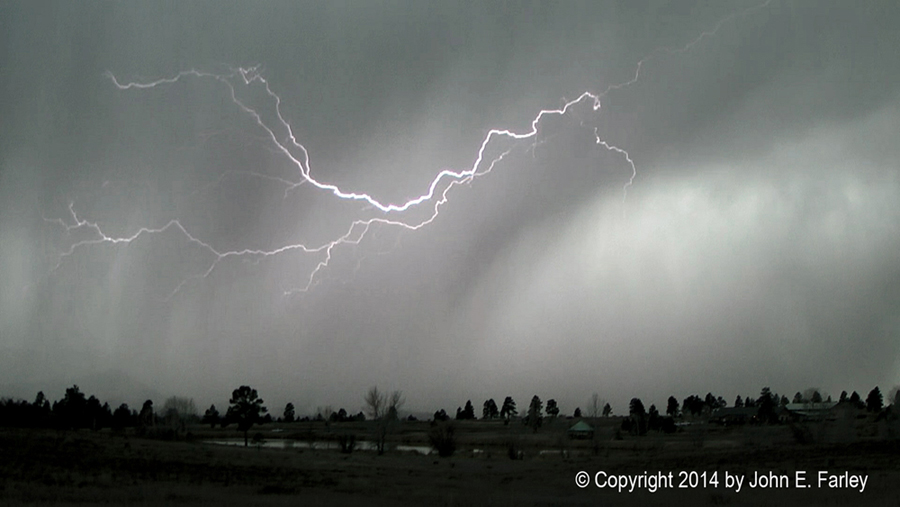 By now, I was beginning to become concerned about the safety of shooting video out the driver side window looking toward the leading edge of the storm. As I got ready to reposition, lightning occurred within about a half mile of my location. I rolled up the window and moved to reposition inside the precipitation core, figuring I could get video of whatever kind of (likely frozen) precipitation was falling, shooting out the passenger side from the driver seat so in case a strike occurred, I was not right next to the open window. This involved moving a mile or so west from where I got the above pictures, travelling up a hill and through a small residential neighborhood then back town to another flat, open place. By the time I started to move, a little light rain started to fall on the edge of the storm. But within a half mile, large chunks of graupel (snow pellets) becan to fall, and soon the graupel was falling heavily. When I left the spot where I got the pictures above, the temperature was in the mid-40s, but once I was in the core, it quickly fell to the mid-30s, and remained there or colder the rest of the time I was out, and indeed on through the evening.

When I got to the spot I was looking for about a mile or so west, I resumed videoing and got the graupel falling along with some lightning that did not show up too well in the video, followed in a few seconds by another rather loud roll of thunder. Then the storm was past me. I got a little more video of the back edge of the low-topped storm showing an updraft and the anvil, as one last roll of thunder occurred.

You can see my Youtube video of the lightning, thunder, and falling graupel here:

From there I was behind the storm, and I pursued it for 10 or 12 miles on the curvy roads in light snow and graupel with occasional flashes of lightning ahead of me - but I never really could catch up again. In places, there was a quarter inch or so of snow, graupel, and slush on the roads, which limited my speed and assured that I was not going to catch up with the storm again. Eventually I sat in a spot with a good view to the northeast as the storm moved away from me and up and over the San Juan mountains.

I gave up and headed home around 5 p.m. As I did, it became evident that another band of precipitation was approaching. Along the leading edge, there was a very low shelf cloud, in places hugging the east slope of the mountains to my northwest. But I did not see any lightning with this next band of precipitation. Soon I was in it, with a mixture of rain and snow that became all snow about the time I got home. It continued to snow steadily for the next four hours, occasionally moderately but mostly light snow. By the time it stopped around 10 p.m., we had 1.7 inches at my house. It resumed lightly and intermittently after that, bringing the accumulation to near 2 inches by the next morning.

The snow was wet, with the overnight low only down to about 28, and the convective nature of the snow also likely gave it some electrical charge. As a result, the snow clung to the trees, branches, wires, etc., creating quite a winter wonderland! The pictures below include one that was taken around 8 the next morning, and one just before sunset, when the sun finally poked out under the west edge of the cloud deck that persisted all day, illuminating the pine trees in our neighborhood that were still nicely coated with snow. 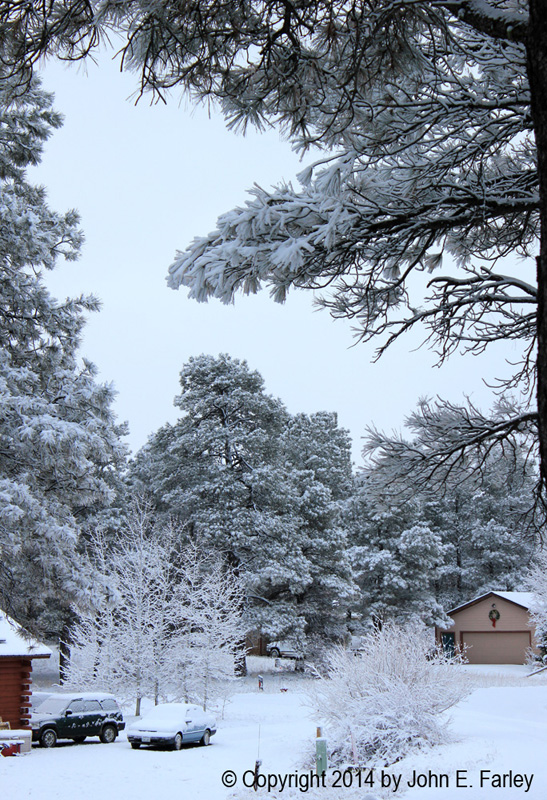 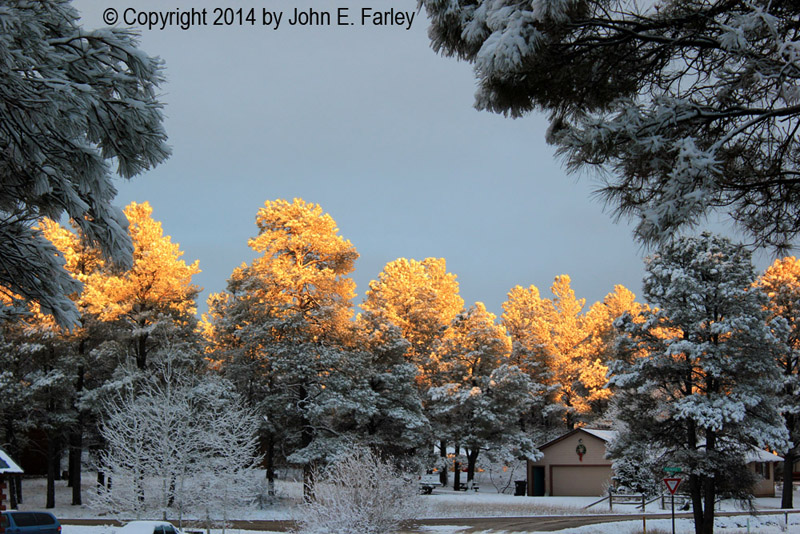