During the period from March 12 to 14, a major snowstorm impacted much of the Rocky Mountain region. Most of the media attention went to northern Colorado and southern Wyoming, where the storm produced record and near record snowfall in a number of areas. The Denver airport got over 27 inches, the fourh-heaviest official snowfall ever for Denver. And with more than 30 inches, Cheyenne, WY set an all-time snowfall record. And some areas in the mountains east of the Continental Divide in Wyoming and northern Colorado got even more - 52 inches at Windy Peak, WY and as much as 40 inches in some high-altitude locations in Colorado. The storm also produced widespread heavy snow and blizzard conditions on the plains of southeast Wyoming and northeast Colorado, with major interstates closed for an extended time, and many motorists stranded. In these areas, abundant moisture from the Gulf of Mexico and easterly upslope flow north of a strong low pressure system created the perfect conditions for a high-end snowstorm. But there was also some interesting weather in the mountains of southern Colorado and northern New Mexico that got far less attention, but did offer up some nice photo ops for me in Santa Fe, NM. 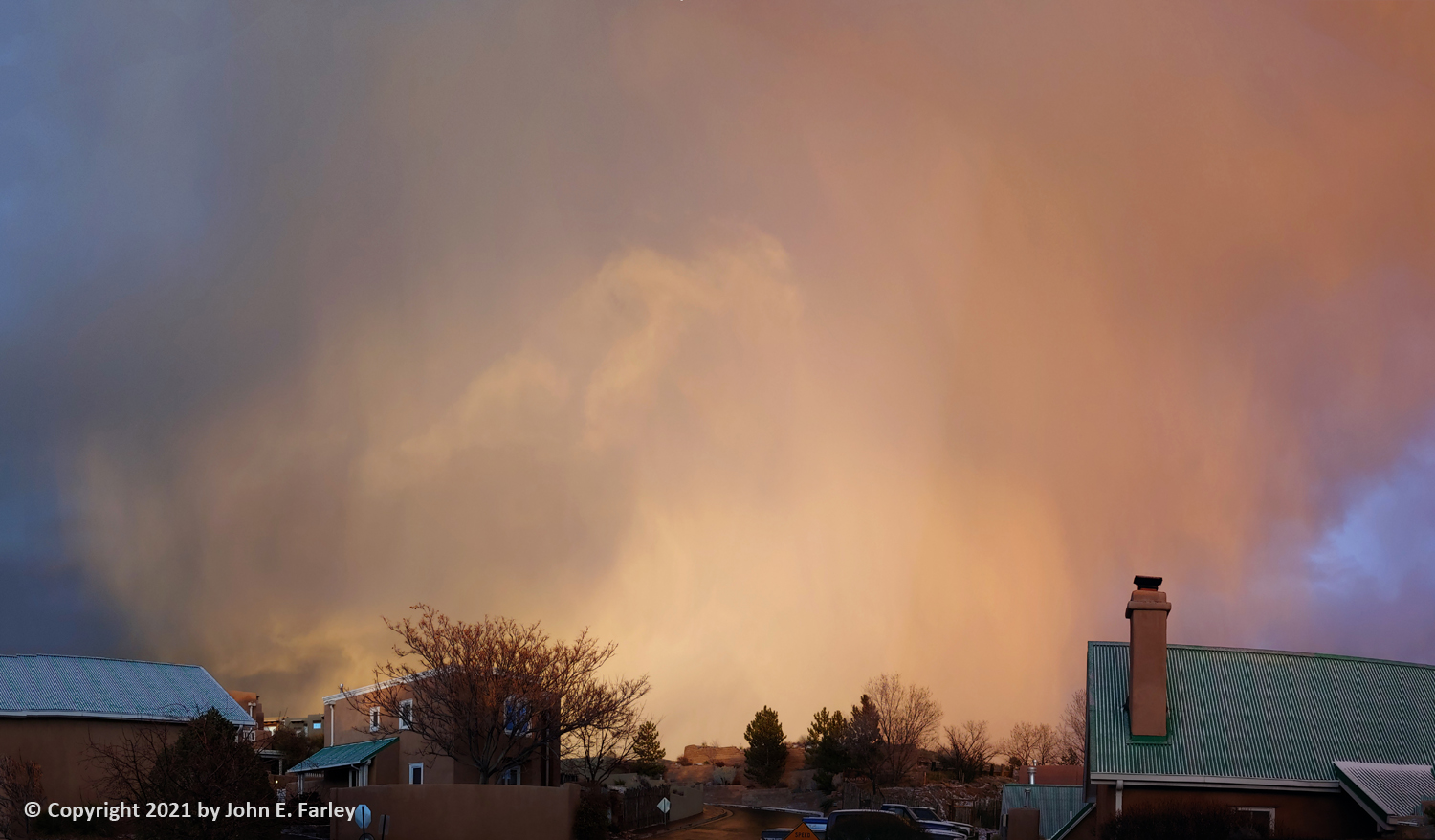 The picture above is a photomerge panorama from 4 pictures I took of the intense shower of graupel and snow that popped up over the northeast part of Santa Fe just before sunset Saturday and moved into the mountains. This, as well as a thundersnow squall that formed northeast of Espanola a couple hours earlier, turned out to be the beginning of a sustained snowstorm over the Sangre de Cristo Mountains that lasted for around 30 hours. As the unstable air under the same low pressure area that produced the big snow in northern Colorado and southern Wyoming hit the New Mexico mountains, it was driven upwards, with the area of steady, heavy snow staying pretty much in the same place for that entire time. South of the low pressure center the wind was from the west/northwest, so unlike up north, it was the west slope of the mountains in NM that got the big snow. And unlike up north, where moisture was more abundant, the snow just fell in and immediately adjacent to the mountains. So while Ski Santa Fe got 21 inches of snow, most of Santa Fe just 15 miles away got no accumulating snow, with only a tenth or two of an inch in the northeast part of town. Every ski area in the NM Sangres got well over a foot of snow, with Taos topping the list with 25 inches. All of these snow totals well exceeded the 6-12 inches that had been forecast for the Sangre de Cristos. Wolf Creek Ski Area in Colorado also got over two feet of snow from this storm.

Unlike northern Colorado and southern Wyoming, though, New Mexico and southern Colorado did not expreience much snow outside of mountainous areas. Without the abundant moisture that rotated from east to west around the northern side of the low, snow did not accumulate significantly in lower elevations on the southern side where the flow was from west to east. Thus, as noted above, Santa Fe got only a tenth or two of an inch of snow in the part of town nearest the mountains, and nothing elsewhere. Similarly, Pagosa Springs, CO, only 25 miles SW of Wolf Creek, got only around an inch and a half or two inches. On this side of the low, where the wind was from the west and moisture less abundant than farther north, it took the mountains interacting with the unstable air to create enough forcing to get heavy snow. But in the mountains of northern New Mexico, this setup persisted for 30 hours or so, resulting in very heavy accumulations in excess of 20 inches on the west slopes and highest peaks of the Sangre de Cristos. In the Jemez Mountains, up to a foot also fell on the western slope, but only around an inch on the eastern slope just above Los Alamos. So, in summary, a widespready heavy snow event north of the track of the low and a heavy snow event much more localized to the mountains south of the track of the low. You can see this on this snowfall map, where I added a black line representing the approximate track of the low pressure system:

As noted above, when the storm began over the Sangre de Cristo Mountains the afternoon of the 13th, brief but intense convective showers of graupel (snow pellets) and ordinary snow occurred in the part of Santa Fe closest to the mountains and in the foothills just above town. As noted, there was also a thundersnow event farther north, a little northeast of Espanola. I headed up into the hills just above Santa Fe hoping for thundersnow there, but it did not happen. However, when I got back into town, the sky put on quite a show, as seen in the picture above. Here are a couple more pictures I took of the sunlit storm, along with one of the snow pellets accumulating on my windshield and the ground: 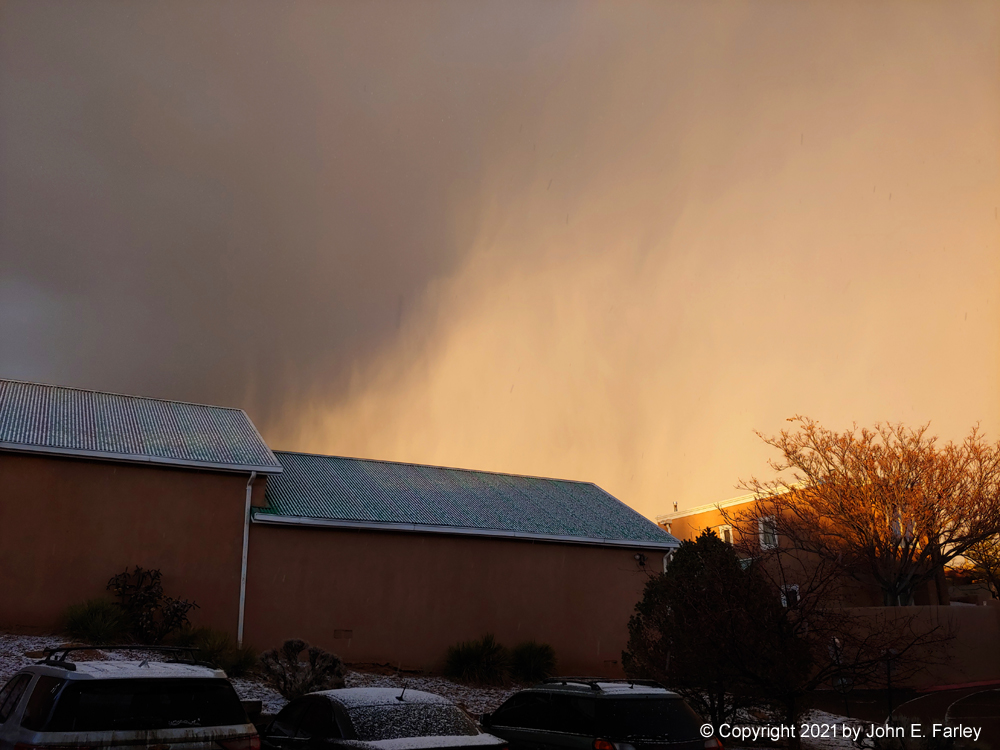 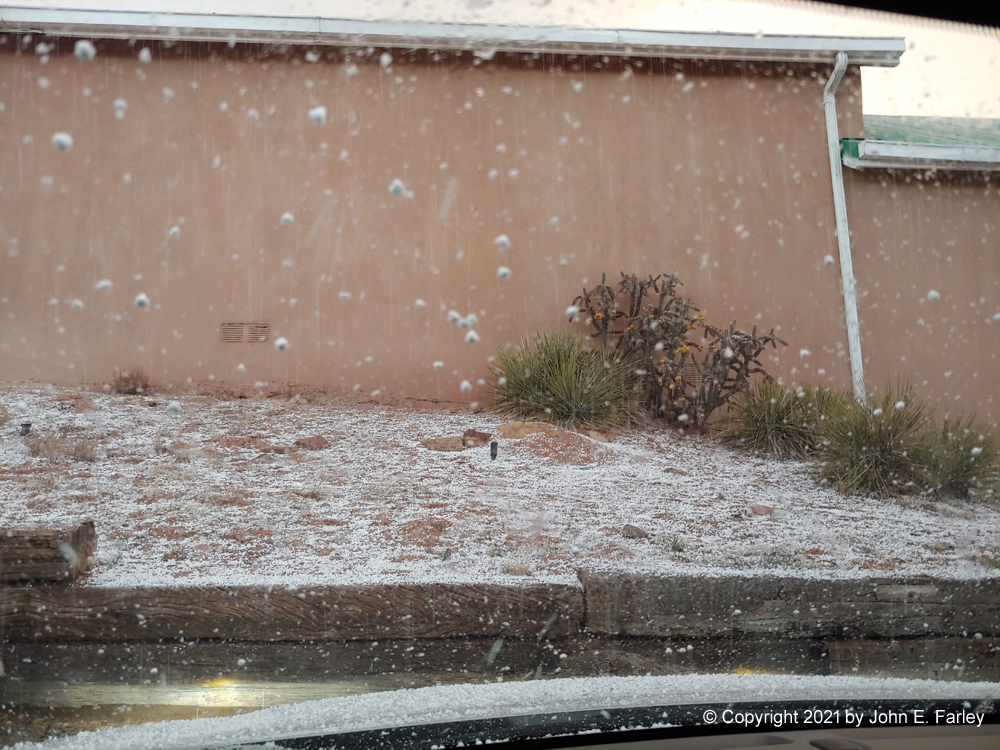 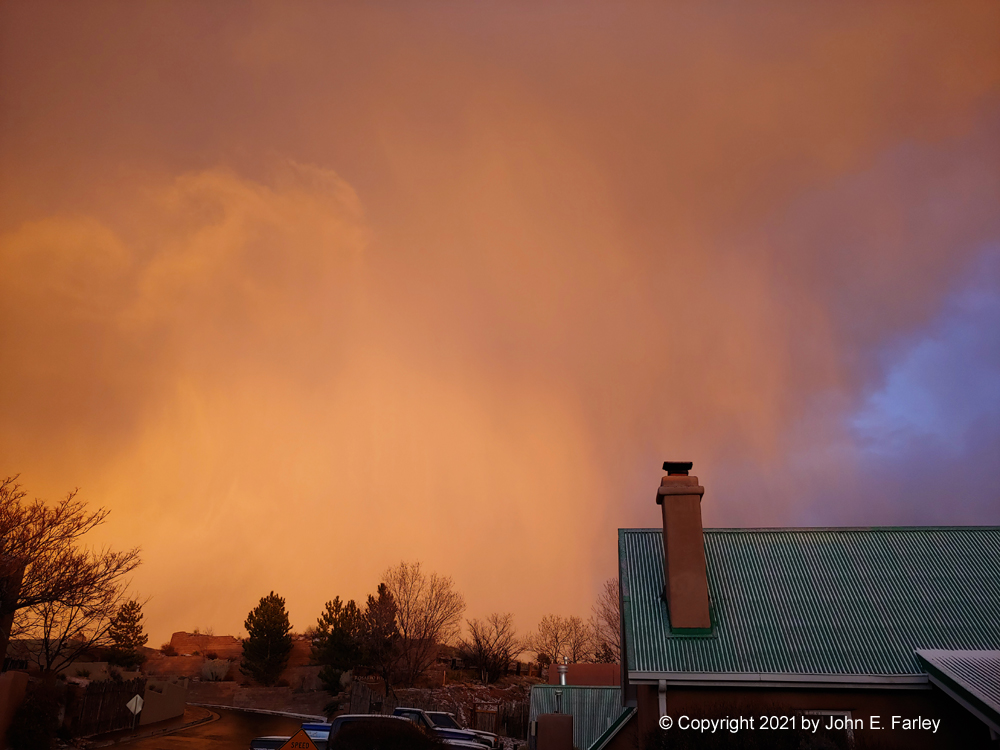