This page will feature pictures and reports from my observations of southwest monsoon storms in the month of July.

Each year, the North American Monsoon brings much-needed moisture to the U.S. Southwest in the months of July, August, and September. It results from a seasonal wind shift that brings moisture to the region from the Gulf of Mexico and from the Gulf of California. High pressure that is often present in the central U.S. this time of year pumps Gulf of Mexico moisture northwestward into the region, and a heat low that often forms over southern Nevada, western Arizona, and eastern California brings moisture northeastward from the Gulf of California. This year, the moisture was especially needed because the previous La Nina winter brought very little snowfall to the region's mountains, resulting in extreme to exceptional drought in parts of New Mexico, Colorado, Arizona, and Utah. Along with the much-needed moisture comes a risk of localized flash flooding due to the region's rugged, rocky terrain. This is especially true over burn scars from recent fires, which have occurred in a number of areas this year due to the ongoing drought and the increasingly hot spring and early summer temperatures in recent years. Along with much-needed rain and the risk for localized flooding, the monsoon also brings great opportunities for storm photography. In the generally clear air of this region, both storm structure and lightning can be highly visible, and offer great storm photography opportunities.

This year, the monsoon began sporadically during the first week or so of July, and as it got deeper into the month, the frequency of storms increased in northern New Mexico and southern Colorado. Here are some of my photos and observations:


July 10 - A line of thunderstorms developed over the San Juan Mountains near the Colorado-New Mexico state line, moving slowly westward over Chama and into the Dulce area. It was spectacular at sunset, looking southeast from Pagosa Springs, CO:

This line of storms produced heavy rain near the state line, but passed entirely south of the Pagosa Springs area 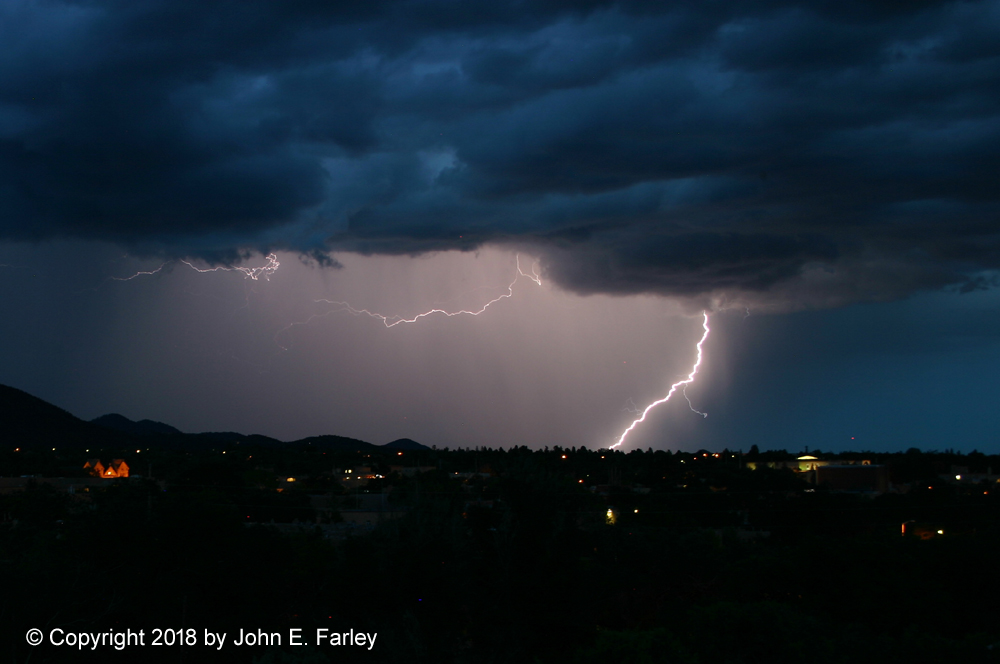 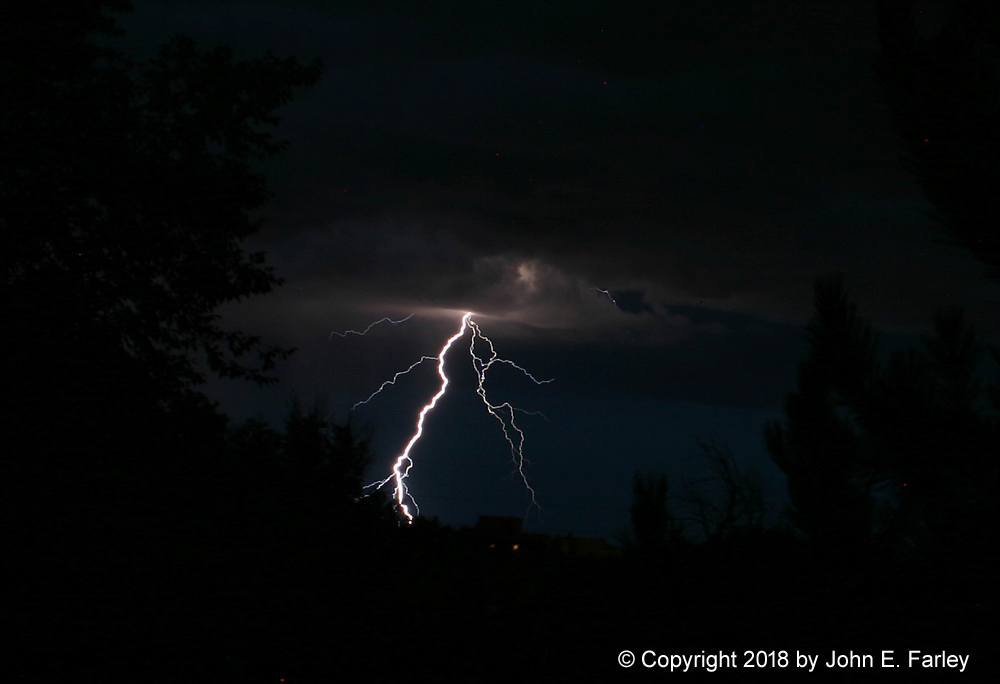 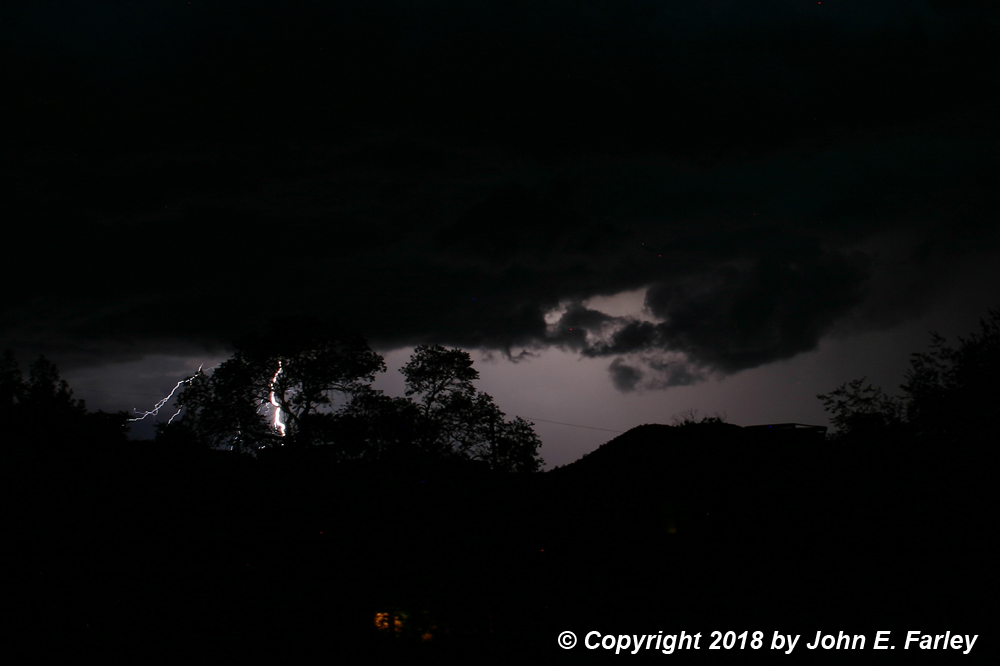 The first picture above was taken from one of my favorite storm observation spots in Santa Fe at the top of a hill. However, I encountered a new (to me) hazard of storm observation and had to move. Not too long after getting the first picture, I noticed some motion on the ground near me and looked down, expecting to see something like a cat. Instead, it was TWO SKUNKS, not more than 10 feet away! I was outta there, and got the other two pictures from a short distance away and from the side of a road. Eventually I had to retreat again due to close lightning strokes as the storms propagated into town. Much but not all of Santa Fe got a good rain, with amounts ranging from a few drops to nearly an inch.


July 17 - A line of strong storms formed over the San Juan Mountains in Colorado, producing gusty outflow winds, probably some small hail, and isolated torrential rainfalls that led to mudslides that closed two major highways. The early stages of this line of storms produced a nice-looking gust front northwest of Pagosa Springs: 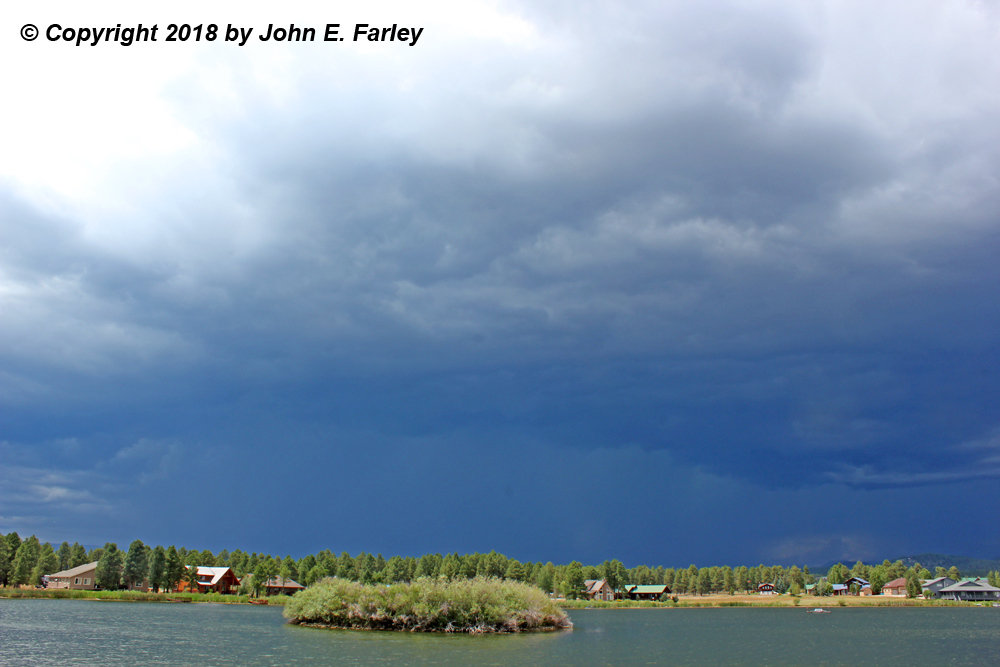 Around the time I took this picture a special weather statement was issued for the potential for 1/2-inch hail and 50 mph wind with this cell. There were some impressive cloud-to-ground lightning bolts as the storms continued their movement into the Pagosa Springs area: 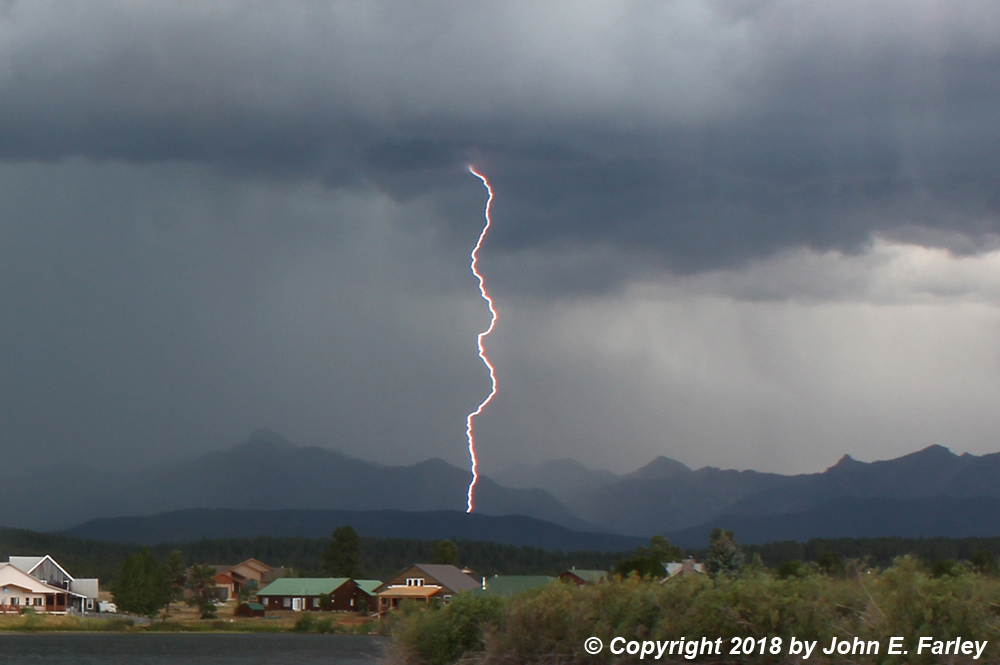 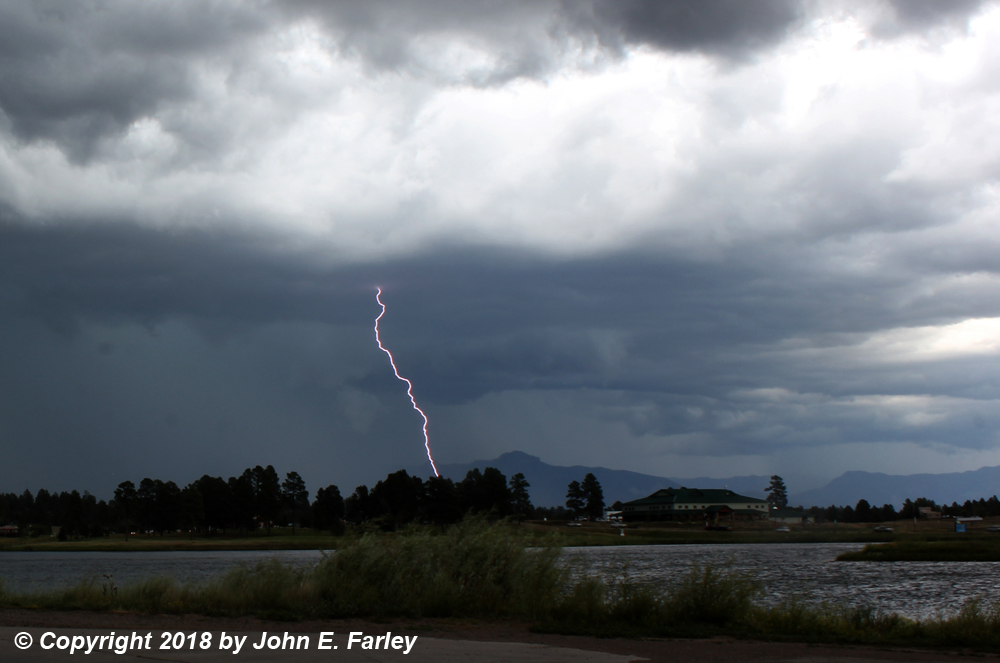 The first picture was taken looking north or NNE across Village Lake. The second was a little later, just before 3:30, looking east or ESE across Pinon Lake. Around the time of the second bolt pictured above, the storm rapidly developed a lowering somewhere to the east or ESE of Pagosa Springs. It had rapid upward motion, but I was too far away to tell if there was any rotation:

It is rare for monsoon storms to produce funnel clouds or tornadoes, but it does happen sometimes. I would not classify this feature as anything beyond a fairly short-lived wall cloud, at least not with any certainty, but it was interesting to look at in any case.

As the storms pushed south, they caused major problems with mudslides. West of Chimney Rock National Monument, a mudslide mired cars on U.S. 160, blocking the road and causing about 100 cars to back up in each direction. This happened about 25 miles west of my location and about a half hour or so after I took the last two pictures above. Another slide in the same general area occurred south of Chimney Rock along CO route 151, also forcing closure of the highway.

An even more serious mudslide occurred just north of Durango, worsened by the burn scar from the 416 Fire. This one blocked both U.S. 550 and the Durango and Silverton Narrow Guage Railroad with a large flow of mud with boulders and logs mixed in. The highway was closed for several hours (and still limited to one-way traffic the next day), and 400 people had to evacuate the train by foot to busses waiting when they got to where the highway was open to Durango. A KOA campground was also flooded and mired, and another 200 people had to be evacuated from that.

July 22 - The thunderstorms this day were not very strong, and the rain was very spotty. However, occurring around sunset, the storms were pretty. One that came off the mountains produced some lightning, and was nicely illuminated in the eastern sky by the setting sun: 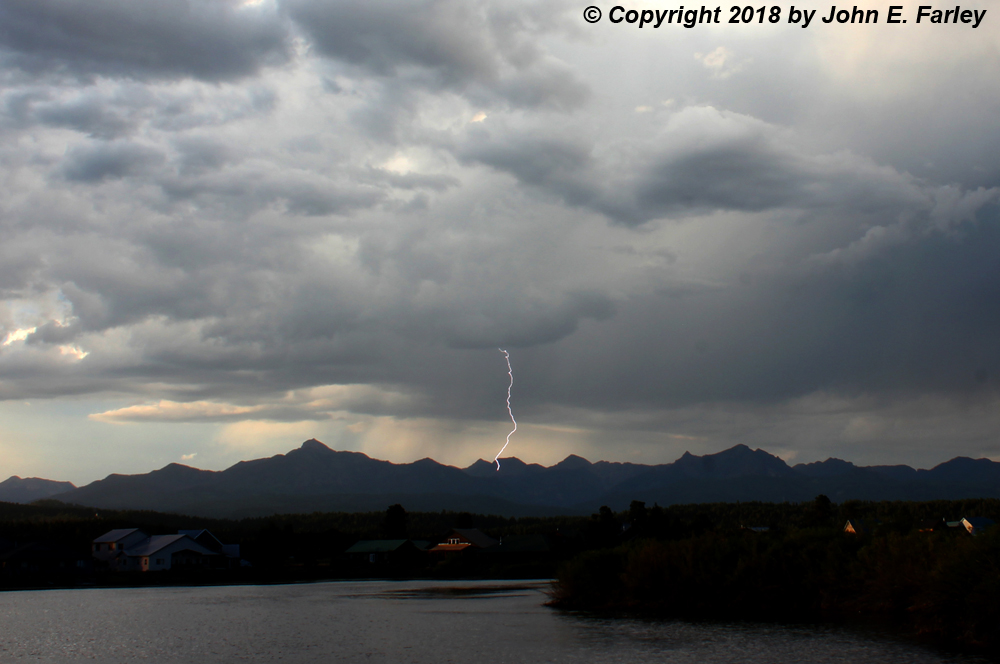 Another storm, even lighter, formed to the west. It was spectacularly illuminated by the setting sun: 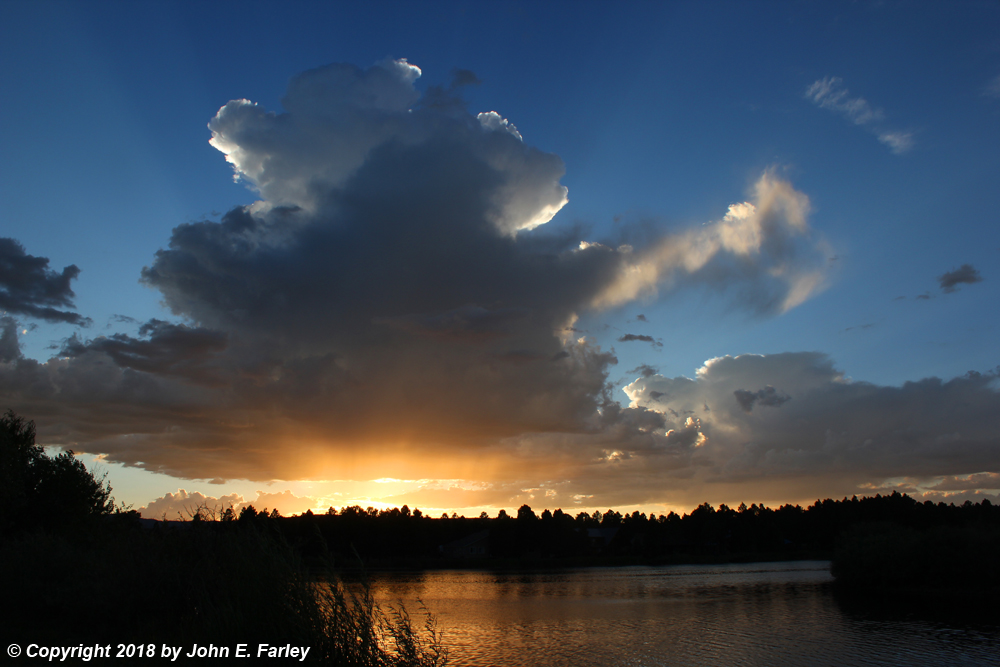 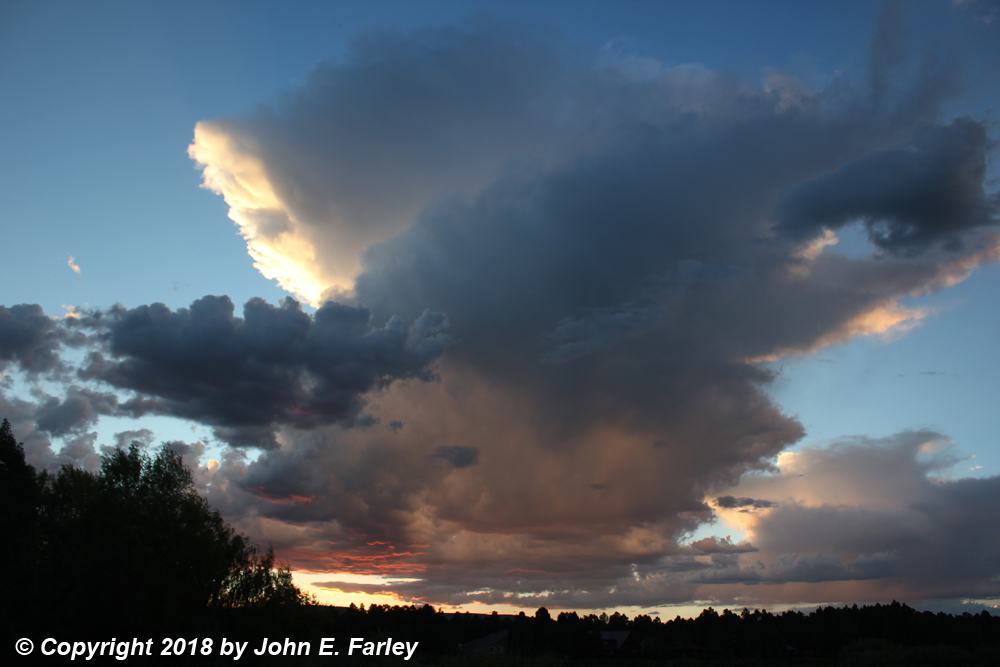 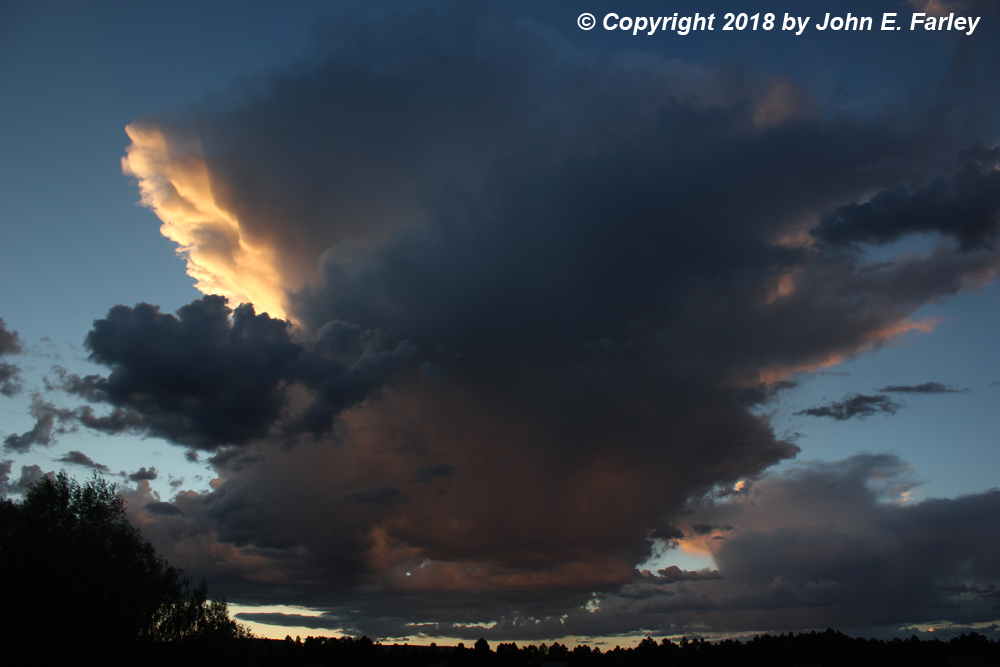 This storm also resulted in the interesting and beautiful phenomenon known as anti-crepuscular rays. Basically, this inovolved the shadow of a thunderstorm being cast all the way across to the opposite (east) horizon at sunset. 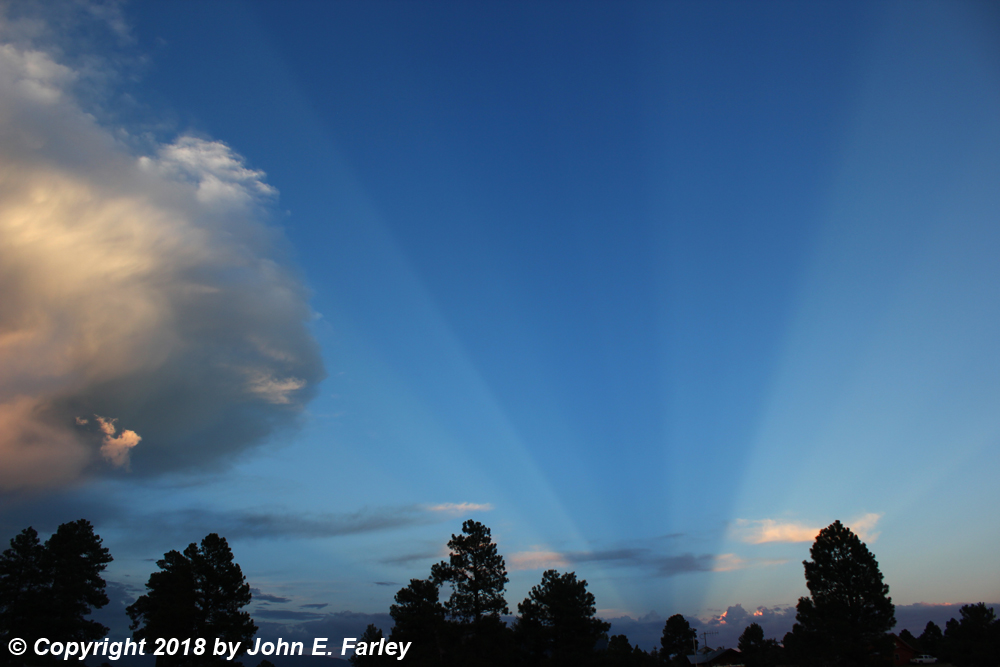 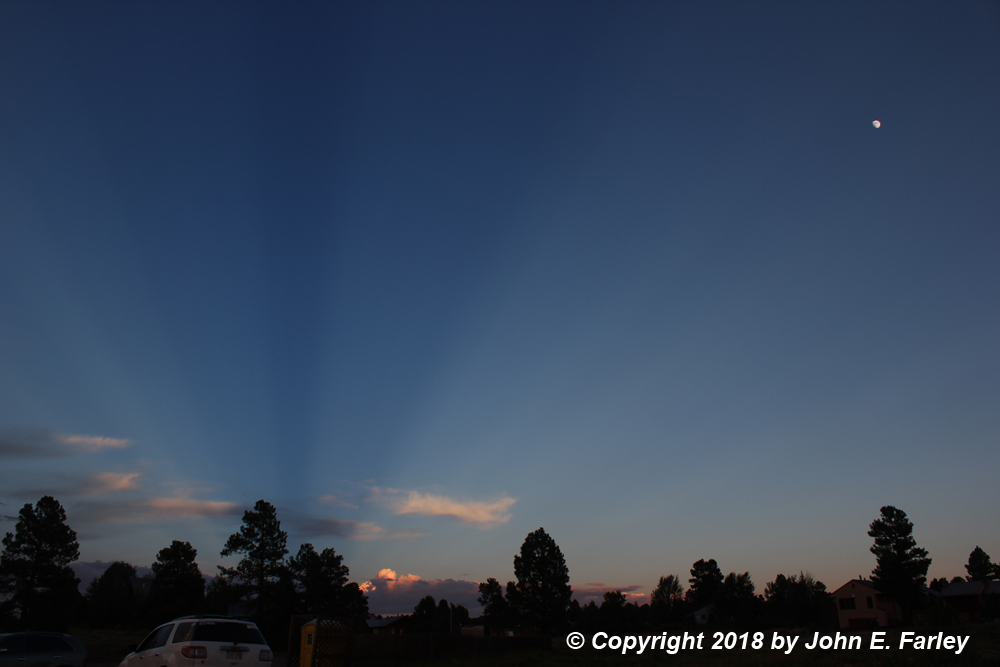 July 23 - Again on this day, the storms produced very little rain in Pagosa Springs. Although it didn't rain much, there was some nice lightning around Pagosa Springs. These pictures are video captures from my phone, since that was all I had with me at the time: 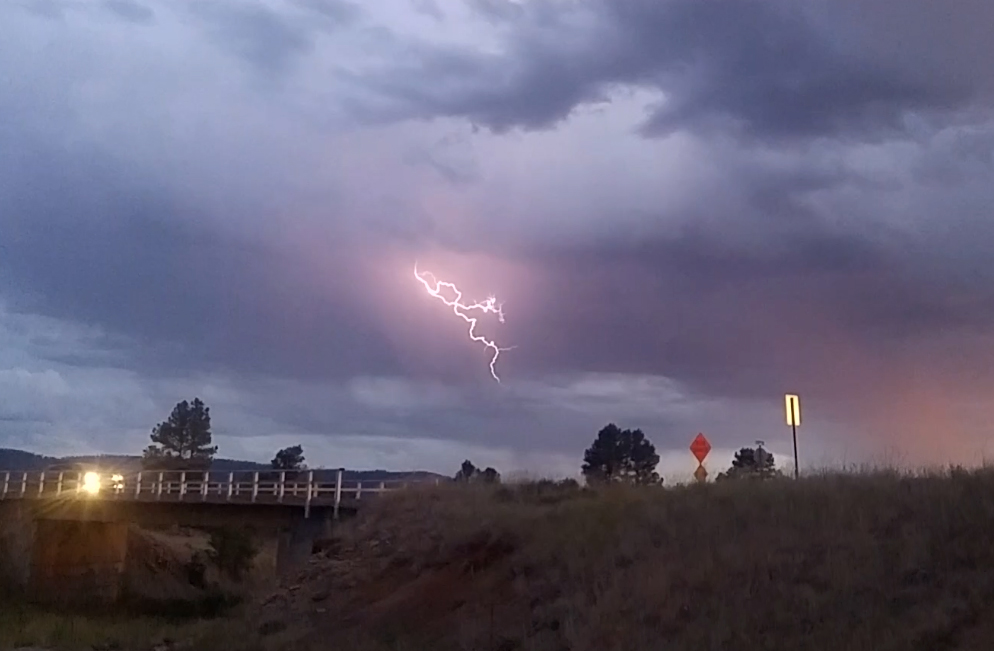 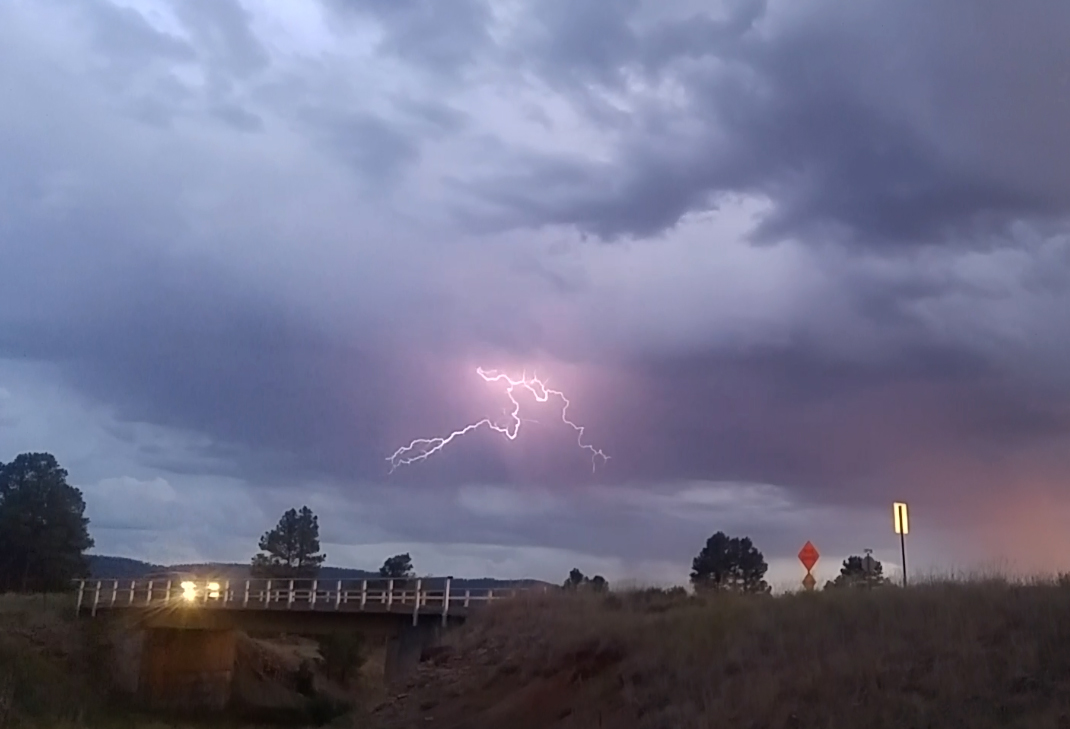 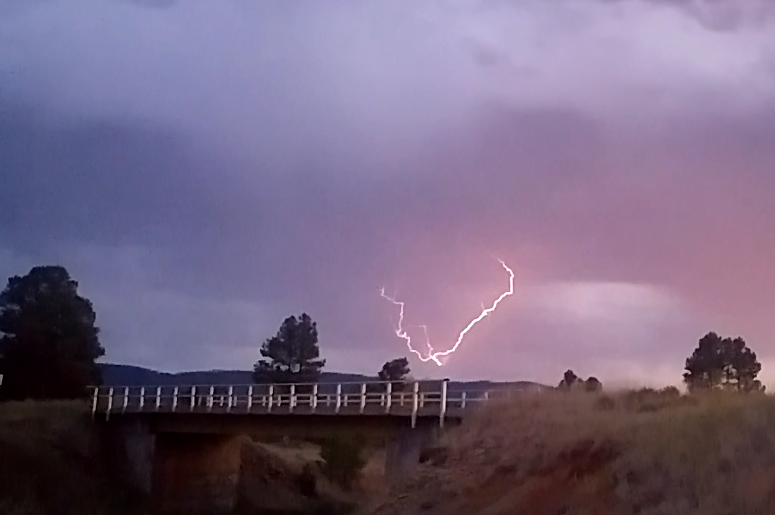 July 24 - On July 24, we attended a picnic at Williams Creek Reservoir, 20 miles or so northwest of Pagosa Springs. The picnic was ended slightly early by a sudden barrage of rain and hail around 1 p.m. Although the storms produced only light rain later when they moved southeast into Pagosa Springs, they produced torrential rain in parts of the San Juans, including over the 416 Fire burn scar northwest of Durango. That resulted in severe flash flooding again, in the same area where it occurred a week earlier on July 17. Again, U.S. 550 was buried in landslides, this time up to 6 feet deep. And again, the Durango and Silverton train and the KOA campground had to be evacuated. As I happened to be going to Durango the next day, I drove up 550 and got a few pictures of the aftermath of the flash floods and landslides. The first two pictures show places where mud, rocks, and debris slid onto 550. Some areas on the first floors of the apartments in the first picture were also flooded. The second picture shows another place where a landslide hit the highway. Notice parts of the fence above taken out. And it looks like some of the fence was new, probably replacing damage from the flash flood and landslide a week earlier. 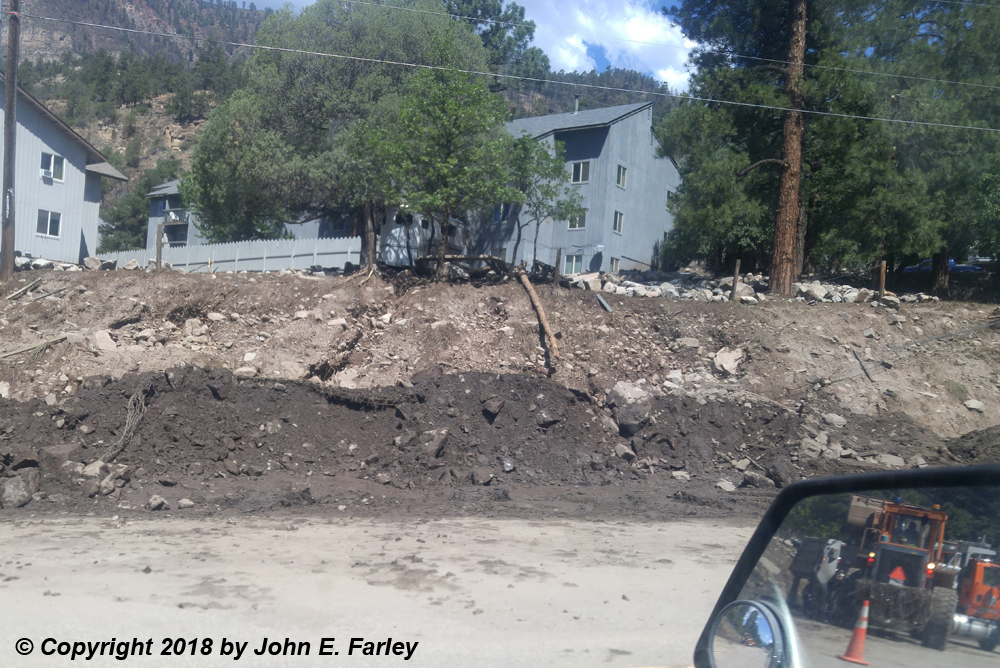 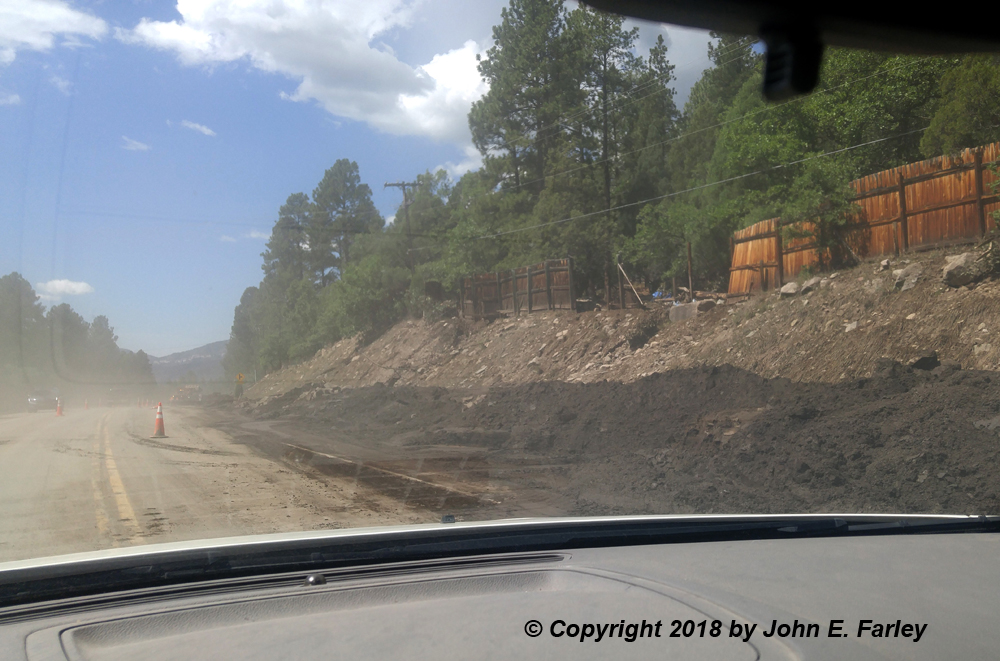 The picture below shows an area the flash flood went through, just downstream from (south of) the Honeyville store, where the parking lot was flooded and left covered with mud. 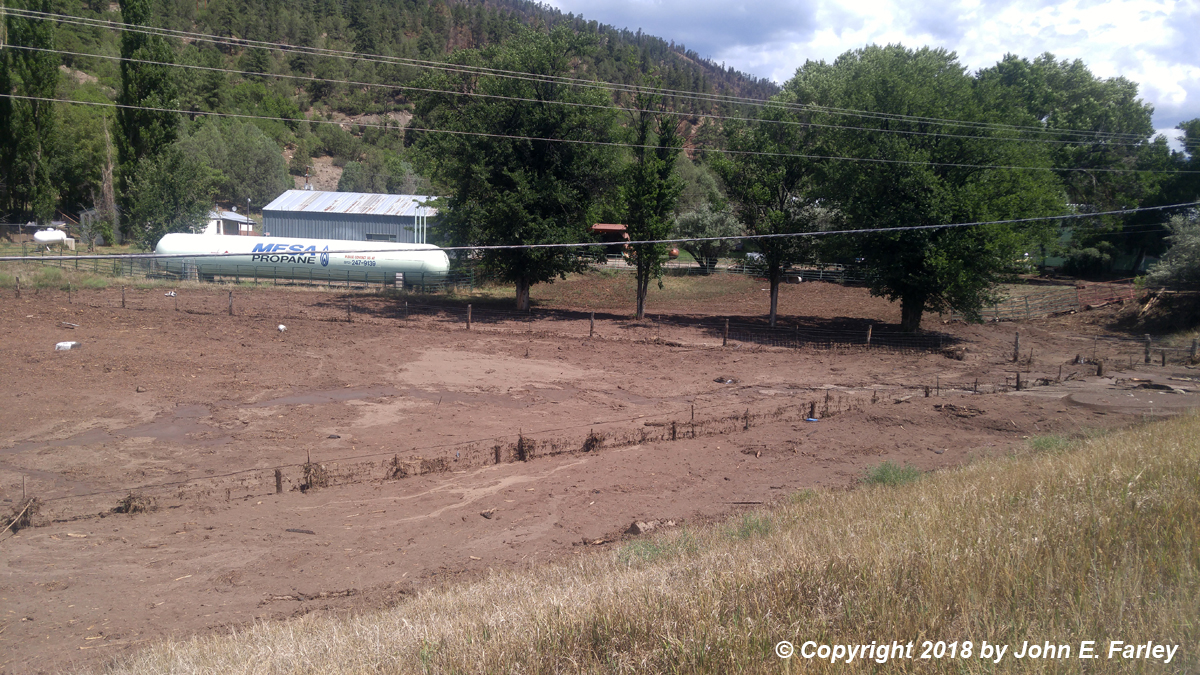 Flash floods have been costly for the Colorado Department of Transportation in recent days, with roads being closed by floods and slides across much of the state. On this day, there were 15-20 large CDOT dump trucks hauling away dirt, rocks, wood, and other debris that had landed on U.S. 550.

July 28 - Below are a couple lightning shots from around sunset July 28 near Pagosa Springs, CO. This cell popped up ahead of the main line of storms moving in, closer than I expected or preferred when I set up. Had to aim the camera way up and couldn't get wide enough an angle for the whole thing, but at least I got 'em. This was kind of the last hurrah of this day's storms and looked to be a little moisture starved, but it had plenty of lightning for a few minutes. Notice that the precipitation coming out of the cloud base looks to be frozen (graupel/snow/hail) with a lot (but not all) of it evaporating as it reached the warmer air closer to the ground and melted to rain. 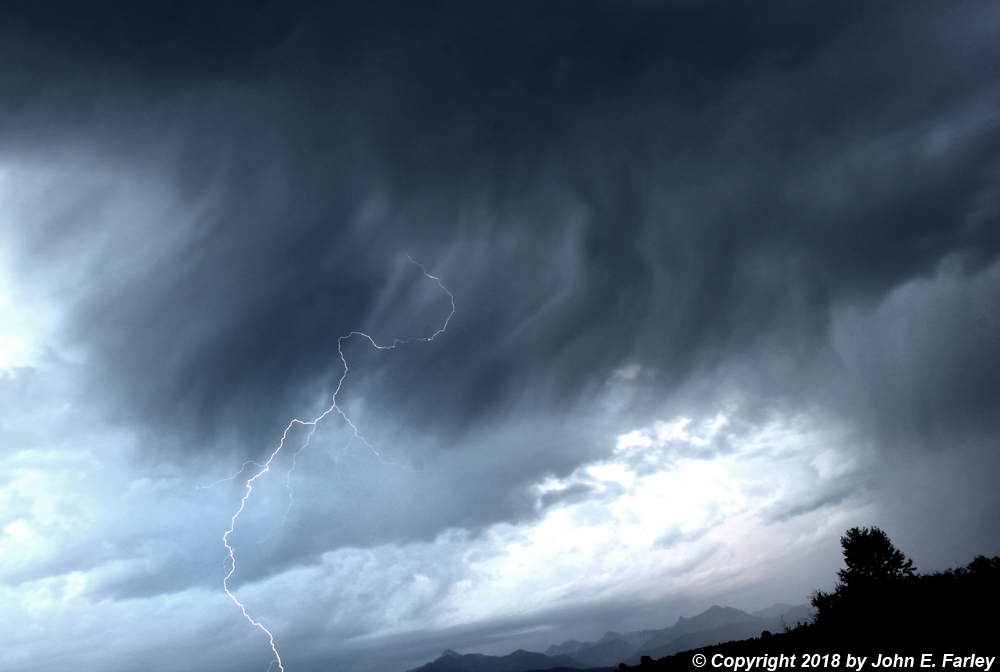 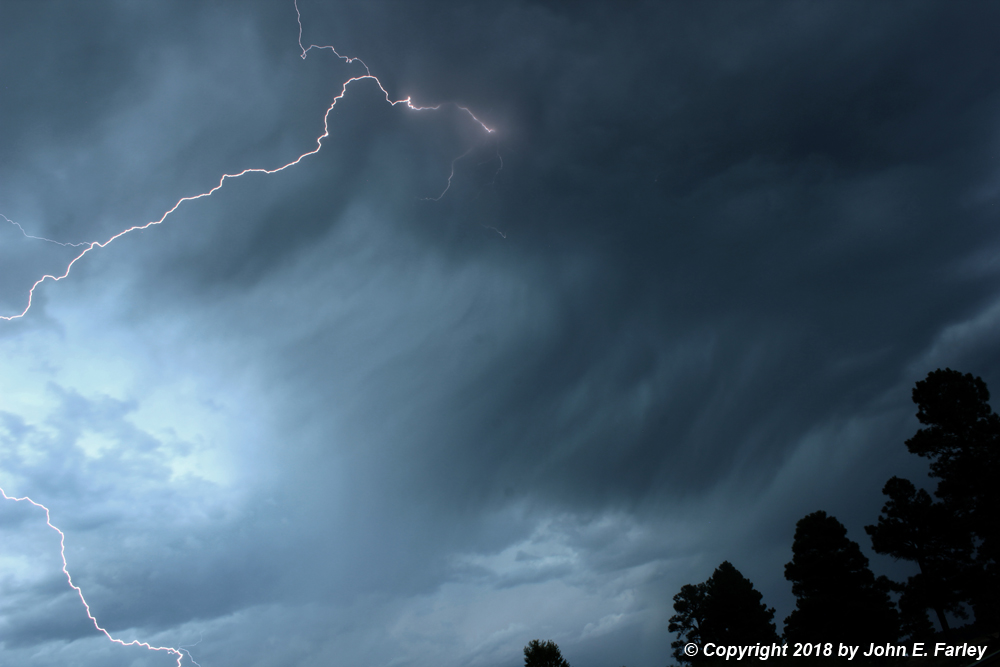