During the period from February 28 through March 3, 2014, an intense winter storm system moved across the United States, creating major impacts from coast to coast. In California, massive flooding and widespread mudslides occurred, and some areas got more rain in a day or two than in the past two years, along with some heavy mountain snows. In Denver, CO, a 104-care pileup occurred on I-25 as a sudden, intense snow squall associated with the storm hit the central part of the city. One person was killed, 30 were injured, and the freeway was closed for five hours. In parts of Texas, Oklahoma, Missouri, and Arkansas, intense thundersleet and thundersnow occurred. In some places, up to 3 inches of sleet accumulated, and in others, the snow and sleet were accompanied by dime to nickle sized hail. At least one person was stuck by lightning. And as the storm reached the east coast, heavy snow forced a one-day shutdown of most of the federal government in Washington, D.C.

This weather system produced some impressive weather as it moved through southwest Colorado. A few locations had thundersnow, although I did not see any of that. But the convective nature of the system did lead to some very large snowflakes when the first wave of the storm moved through Pagosa Springs Saturday morning, March 1: 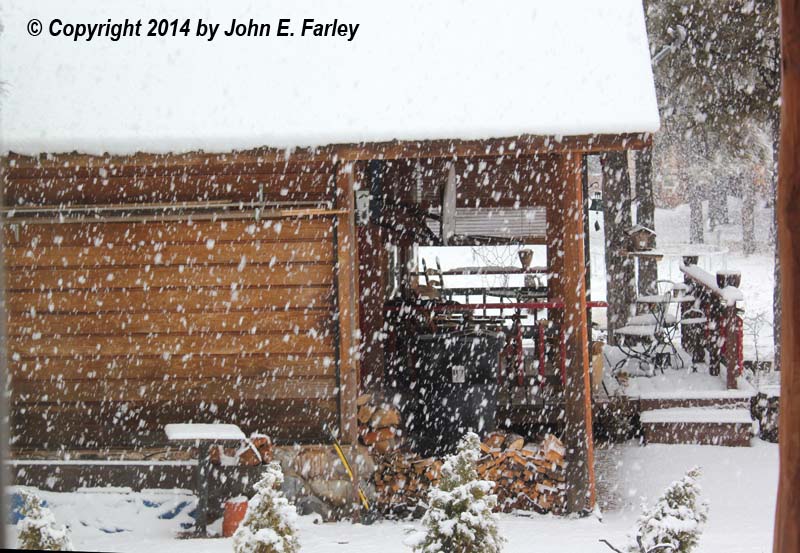 Just under 2 inches fell at our house with this initial wave of snow, but with the temperature just above freezing the snow began to mix with rain, and no substantial further accumulation occurred as intermittent light rain and/or snow fell through the afternoon and evening. However, overnight, mainly between midnight and 9 a.m. Sunday, a heavier wave of very heavy, wet snow moved in, dumping another 6 inches at our house. The very heavy, wet snow brought down some tree branches and wires, and we, along with much of the Pagosa Lakes area, were without power from 7 to 10 a.m. Sunday morning. In fact, according to news reports, 4000 customers in Archuleta County lost power at some point during this storm - nearly the entire county population - with around 100 separate outages of various sizes reported. Here is how it looked in our backyard around mid-morning Sunday: 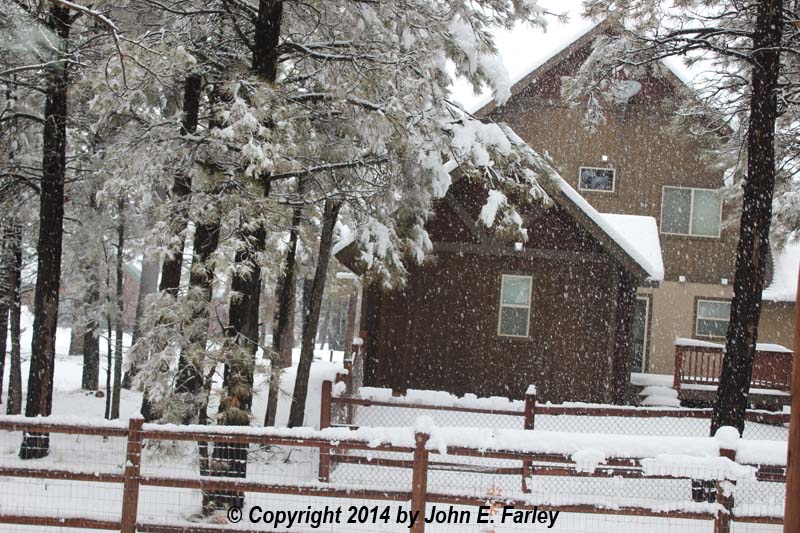 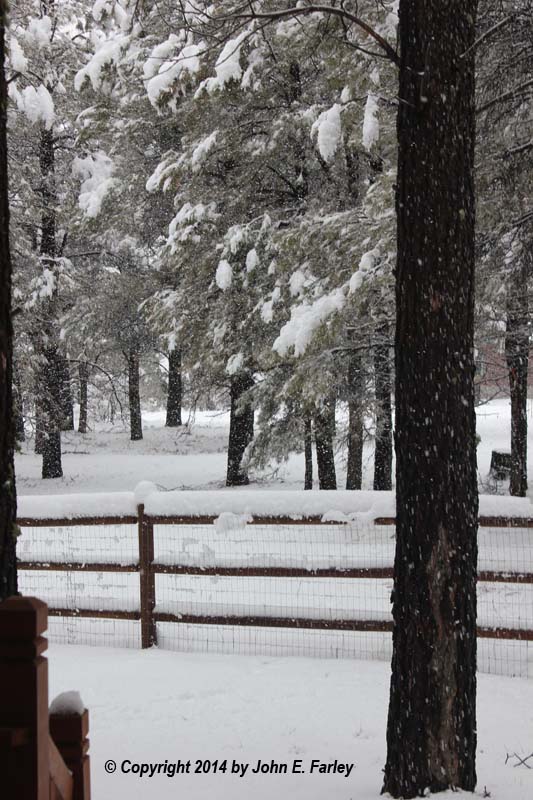 After this wave of snow passed Sunday morning, the sun came out and only flurries or sprinkles occurred through the rest of the day. But late in the afternoon, with the sun's heating, some rather photogenic convective snow showers began to tower up on the back side of the storm system, particularly over the mountains: 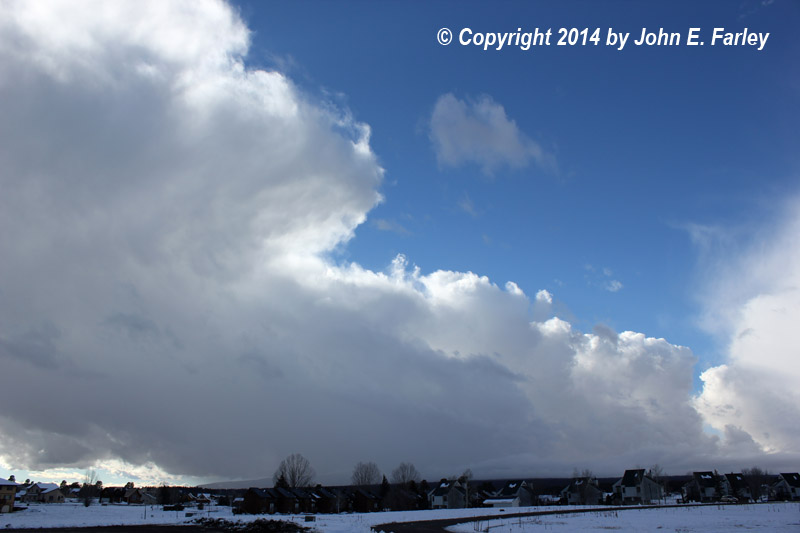 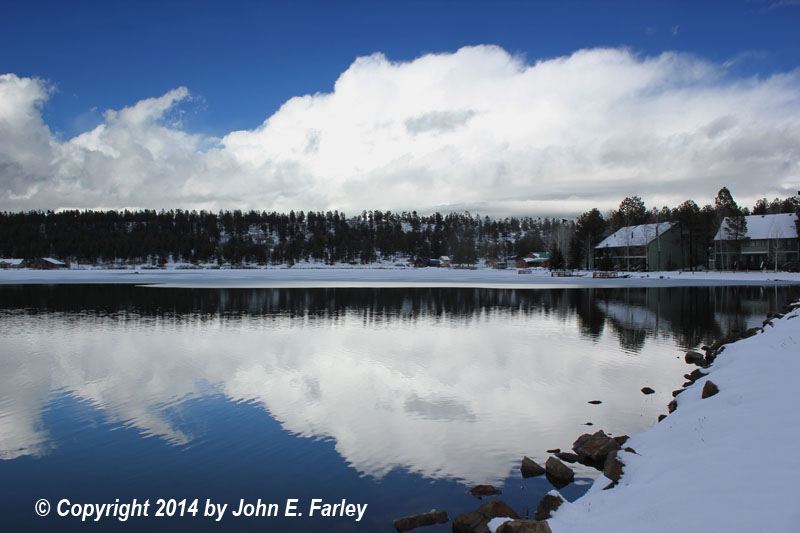 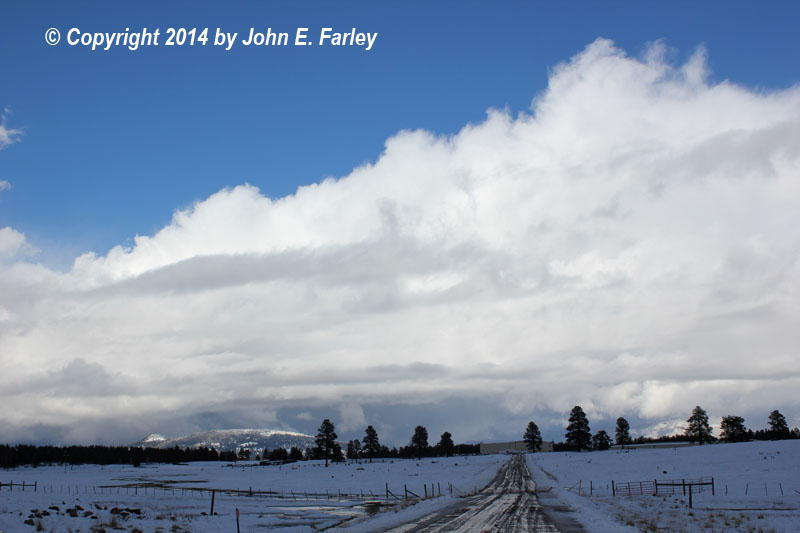 Although visually impressive, these snow showers did not produce sizable amounts of snow, except perhaps in mountain locations. When the band of showers in the first picture above passed over our area, it produced only a couple tenths of an inch of snow, bringing the storm total at our house to around 8.2 inches. In the San Juan Mountains, the snow totals were much higher than in valley locations such as Pagosa Springs, exceeding 2 feet at a number of locations including snow telemetry sites at Weminuche Creek (24.8"), Upper San Juan (26.9"), and Coal Bank Pass (25.5"). The Wolf Creek Ski Area got 28 inches from this storm (including 20 inches in one 24-hour period), bringing the total from this storm and Thursday night's lead storm to 37 inches.