Began the day in Pueblo, heading out from there around 10:30. With a digging trough coming in from the NW and low pressure over northern CO, a stalled back-door cold front stretched NW to SE across the plains. Upslope flow, forecast strong instability (CAPE 1500-3000 across the plains), and strengthening upper-level winds would create a favorable setup for severe storms, including supercells, across much of the plains of eastern CO. The strongest forecast parameters would be around the Limon area, with CAPE forecast around 3000 and EHI perhaps as high as 6. Storms looked to break out early to mid-afternoon, around 2 or 3 p.m. The models were back and forth a bit as to whether best parameters would be near Limon or a little south of there, but when I left Pueblo, Limon was the bullseye so that was where I headed after a gas stop in Colorado Springs. Along the way, I stopped to look at some weak convection over/west of Black Forest, but it was just pulsing and not strengthening, so I worked my way on toward Limon.

2:00 - Lunch in Limon under mainly blue skies. No significant storms up to this time.

2:30 - Convection going up over mtns from west of DEN to west of COS. MCD issued by SPC. I start west on 86 to intercept storms coming out of DEN area.

3:30 - after cutting south, I intercept isolated SVR warned cell near Simla. This storm went up near Calhan ahead of the main line/cluster of storms, and got two SVR warnings. But eventually it was pulled north toward the main MCS and weakened. Meanwhile, storms SW and SE of DEN get TOR warnings. After intercepting the Simla storm around 3:30, I am between the Simla storm and the main MCS with embedded HP supercells to my NW a little before 4:00. If I had just kept going west on 86 instead of turning S around 3:00 to Matheson to intercept the Simla cell, I might have seen the tornado that occurred south of Kiowa around 3:15, but I thought the isolated cell ahead of the line had a better chance.

4:00-4:30 - I get into the notch of the HP supercell that had been TOR warned and which produced the brief tornado south of Kiowa an hour or so earlier. It is embeeded in a line of storms and is SVR warned now, with a 2-inch hail marker on GR3. These two pictures were taken from just NW of Ramah around 4:15: 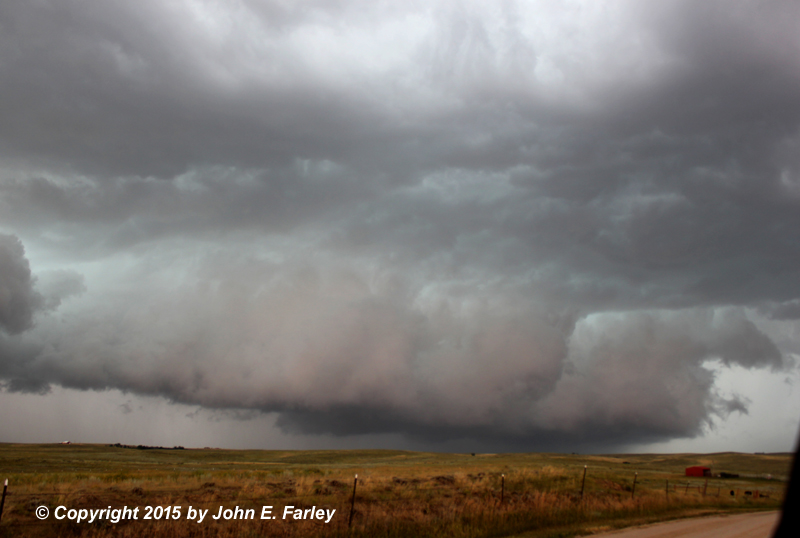 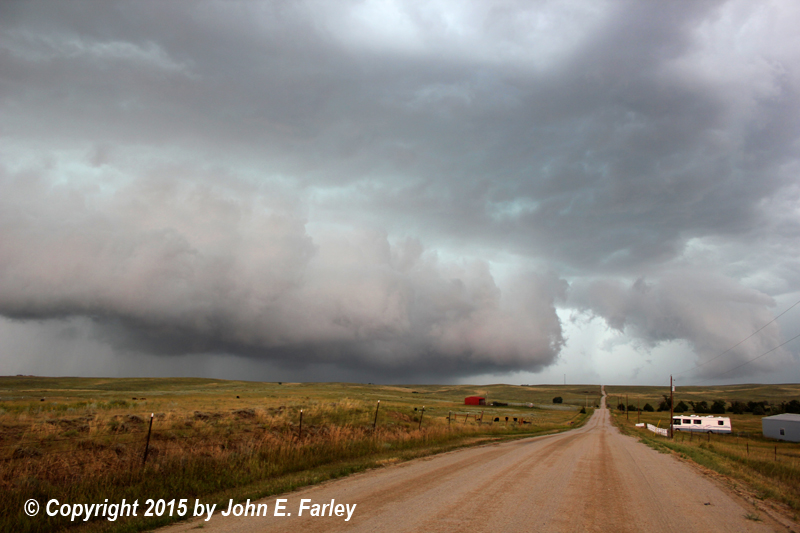 I manage to stay in the notch from N of Ramah through Simla to Matheson. At 4:20, 2.5 inch hail is reported in Peyton - a post-chase radar review shows that this occurred from the next cell down the line, which was rapidly intensifying around this time. Probably some decent hail in the storm I was on, too though. This picture was taken from near Simla a little after 4:20: 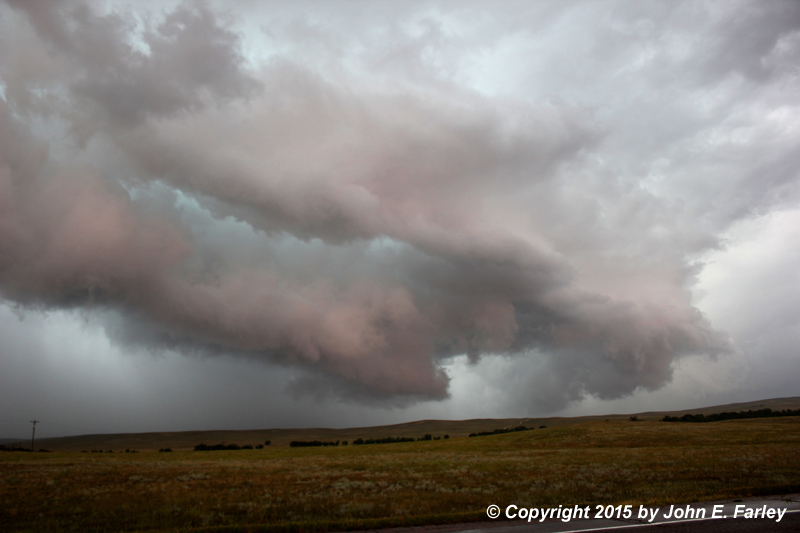 After this it started looking more linear and outflowish in this area, which is supported by post-storm radar analysis.

4:30-5:00 - Heading S from Matheson on gravel road to try to reposition for tail end storm on backbuilding line. Figured I would have been overrun by the storm if I had stayed on 24 toward LImon. TOR issued for Limon around 4:30 for circulation NE of the one I had been on. Radar shows this circulation developed when the earlier isolated Calhan/Simla storm merged into the main line near Limon. Eventually this circulation did produce a couple of brief tornadoes that caused damage east of Limon, near Genoa. Meanwhile, heading south, I encounter rain and 50-60 mph crosswind near tail end as storm catches me from W.

5-5:30 - I jog east, then S again on gravel roads, eventually reaching 94 and heading east. Before reaching 94, I observed new rotation near the tail-end; tried to video it but messed up the video. Too bad, as this was the strongest rotation I would have a decent view of this day. This rotation formed just to my SE somewhere northwest of Punkin Center. After this I head east and south a little more and eventually reach route 94. Trying to punch east and south to regain position on tail-end, I am stopped by hail on 94. I then experience torrential rain, small hail, and 50-60 mph wind along 94, not far west of Punkin Center. It seems a new core formed almost over me (probably the heaviest a bit SE, though) from the updraft above the rotation I had observed. Eventually wind diminishes but hail gets a little bigger, to around 1/3-1/2". I did get some decent video of this.

5:45-6:30 - Finally I proceed east to 71 then south, after initially retreating west to get out of the core, but soon returning east to Punkin Center, and then south on 71. I'm now on the west edge of line of storms, rainbow to east. Occasionally can see towers/storm top ahead, figuring I can perhaps get south and view end of line from W or NW. TOR issued for what is now the tail-end storm, near Rocky Ford. Eventually I catch view of that storm including a possible narrow sunlit funnel briefly visible before being hidden again by wrapping rain. 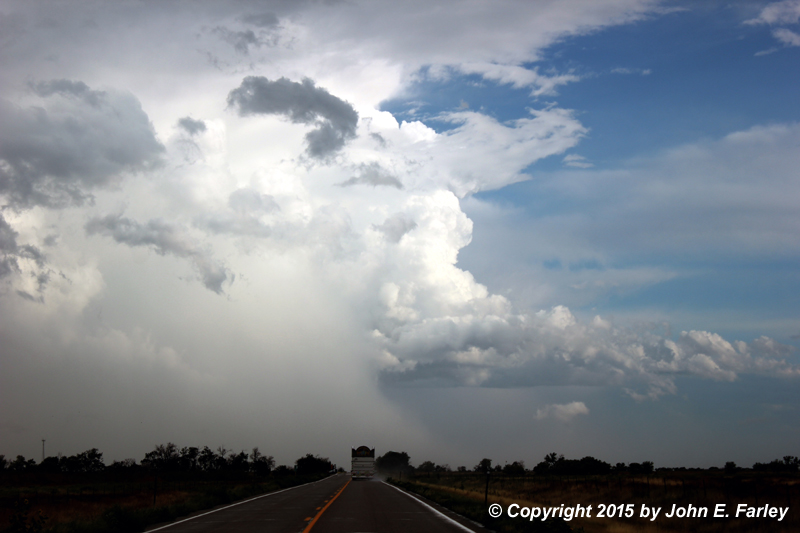 This is my view of that storm, looking south on 71 toward Rocky Ford. 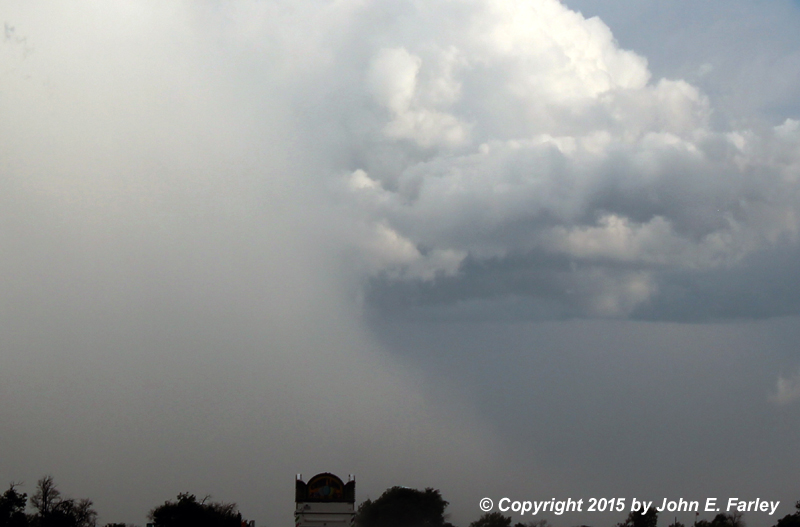 Here is a cropped/zoomed version of the same picture. Note what may be a narrow, sunlit funnel above/to the right of the wrapping precipitation, above the right edge of the truck in front of me. A little more of this had been visible just before I took this picture, but it was already disappearing behind the wrapping precip by the time I could grab my camera.

6:30-7:15 - Playing catch up on supercell that had TOR warning. Cross hail swath a mile S of Rocky Ford. For next 3 miles, lots of leaves stripped of trees by hail (toward W/SW) and minor wind damage. Sunlit mammatus overhead. 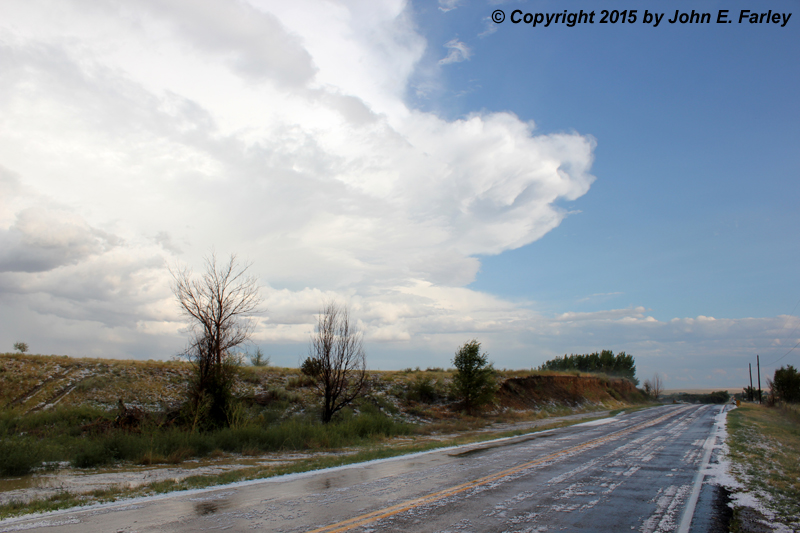 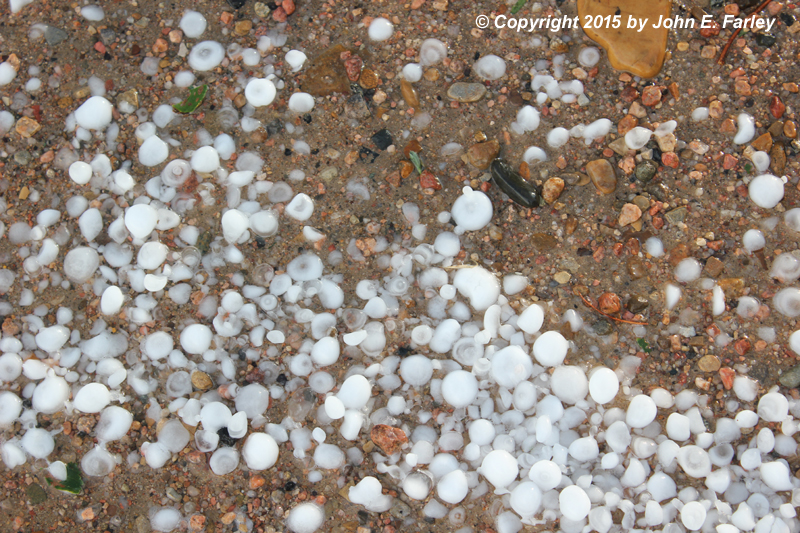 Largest stones looked to be around an inch, though I did not stay long enough to measure as I was still trying to catch up to storm. 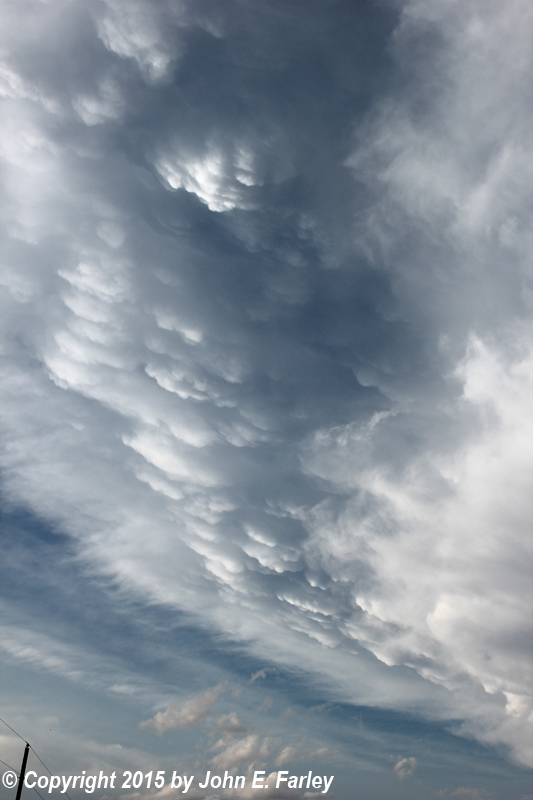 Mammatus overhead, from S. of Rocky Ford and west of La Junta.

Supercell is to my SE; I am trying to get SE of La Junta on 109 but have to get thru town. Roads blocked or partially blocked by flooding in La Junta. 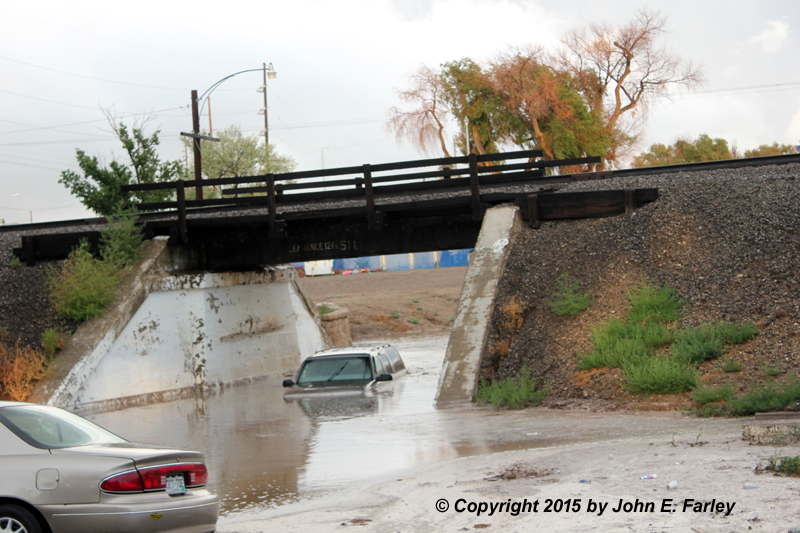 "Do not drive into water of unknown depth." A few blocks north, the westbound lanes of route 50 were also closed due to flooding under the same train tracks.

7:15-7:45 - Getting thru La Junta and then SE on 109 trying to get a view of the base of the supercell to my SE. On radar this now quite-large storm continues to have high reflectivity, partial hook, and hail markers. Lots of low scud under updraft but hard to discern features as core is well to my east, with no road option to get closer. Spectacular sunlit mammatus are overhead: 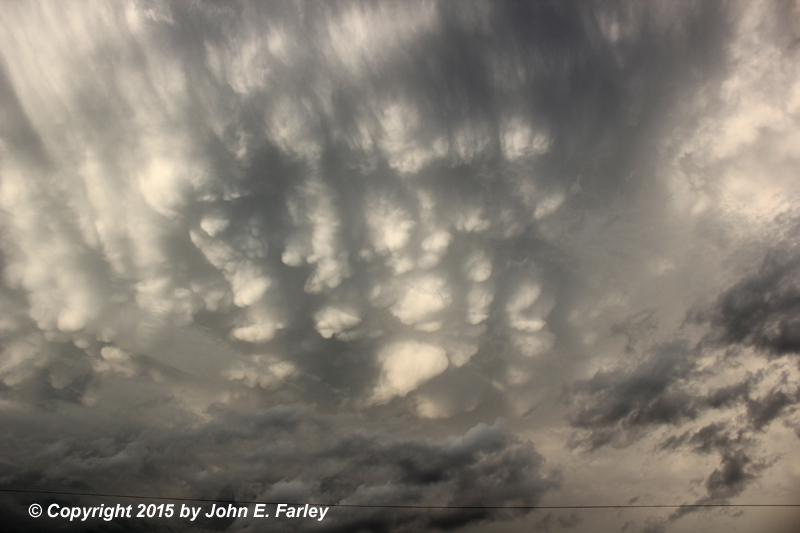 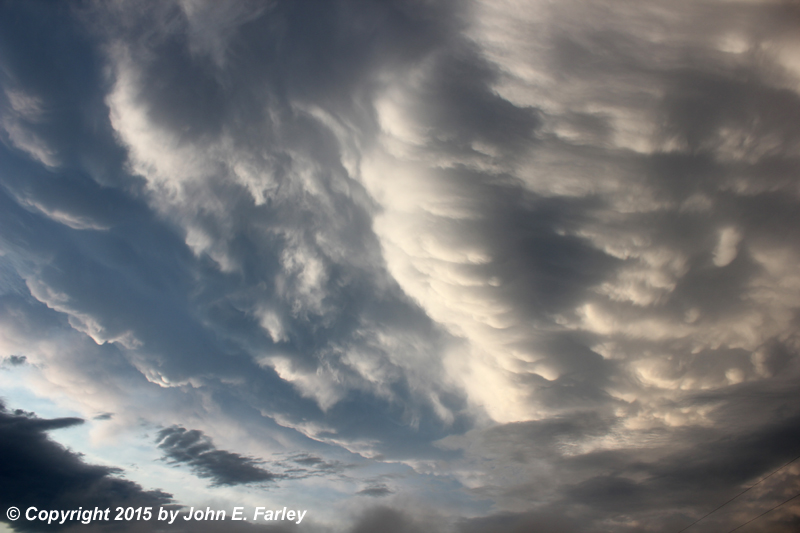 Here are a couple wide-angle shots of the mammatus. The second one was pretty much looking straight up. 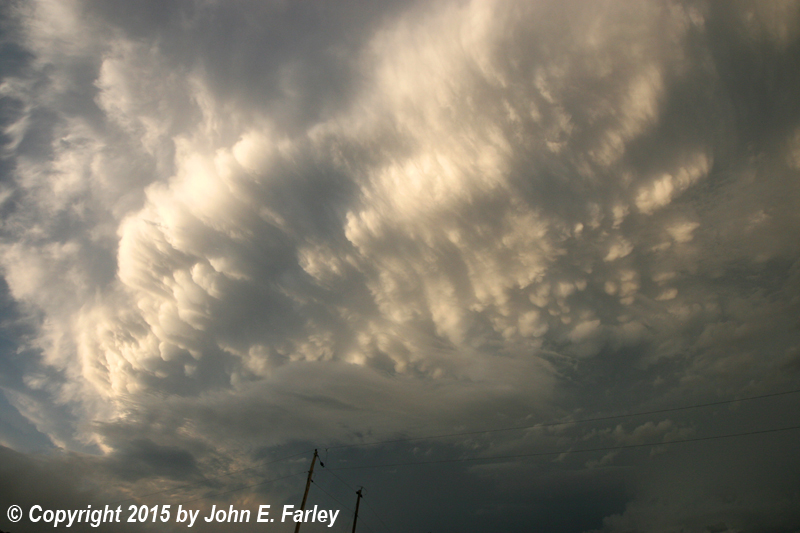 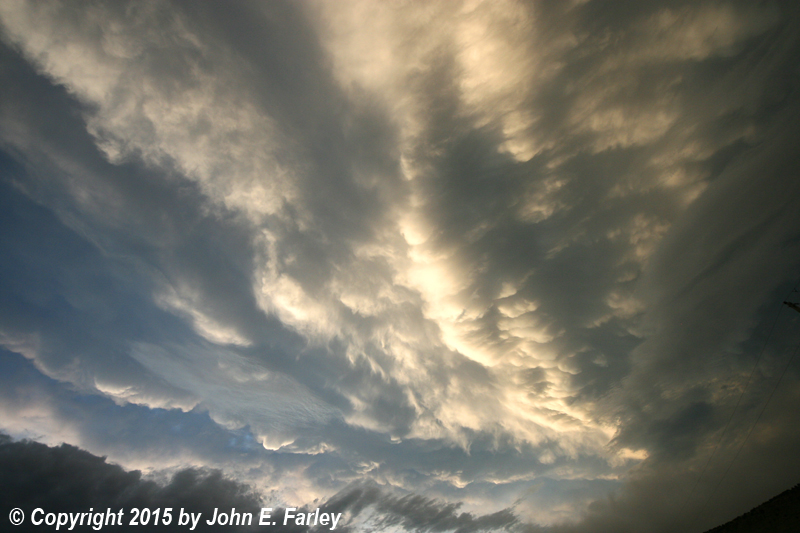