Several factors came together to produce a number of strong to severe thunderstorms this day over southeast Arizona, western and north-central New Mexico, and southwest Colorado. Strong monsoonal flow was interacting with the jet stream, which was passing just south of the Four Corners, with an embeeded wave moving through the area along the jet stream. These features, along, probably, with a diffuse continuation westward of the stationary front that had been causing major flooding problems across a wide swath of the country, resulted in storms more organized, persistent, and intense than typical monsoon storms. I hadn't been paying a lot of attention to the weather, but around 2 p.m. I noticed on radar that a strong line of thunderstorms was moving into southwest Colorado and western New Mexico, with severe thunderstorm warnings for a couple of the storms west of Durango, CO and near Grants, NM.

Watching the radar, I noticed around 3:00 that an isolated storm had formed ahead of the main line, which by then was weakening. This storm was north of Bayfield, CO, and was likely forming on outflow from the earlier line. I decided to target this storm and any others that might develop near it, figuring that the environment was favorable for strong storms and that it likely would move into or at least within viewing distance of the good chase terrain along Piedra Road northwest of Pagosa Springs.

Headed out the door around 3:15 or 3:20, and was in place and viewing the storm when it went severe warned around 3:40, although I did not know that at the time. This picture, showing a large lowered area, was taken a few minutes after the warning was issued. Although under an updraft, this lowering seemed at least as much related to outflow as to inflow, not totally surprising since these storms were going up on the outflow of the earlier line of storms to the west. As can be seen in the panorama picture below, the lowered area quickly evolved into a shelf cloud as a new line of storms began to form southward from the main storm:

As the storm came closer, however, a more concentrated lowered area developed under the strongest updraft near the core, as can be seen in this picture, taken around the time radar suggests the storm reached its peak intensity, probably about midway between the south end of Vallecito Lake and a location along Piedra Road a few miles northwest of where I was. This lowered feature persisted for about 10 minutes or so, and as the storm came closer, was accompanied by quite a bit of cloud-to-ground (CG) lightning in the storm's core: 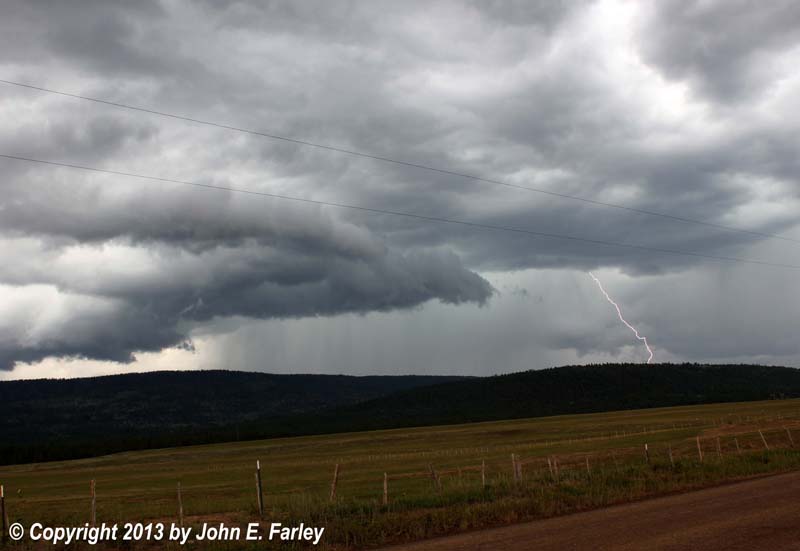 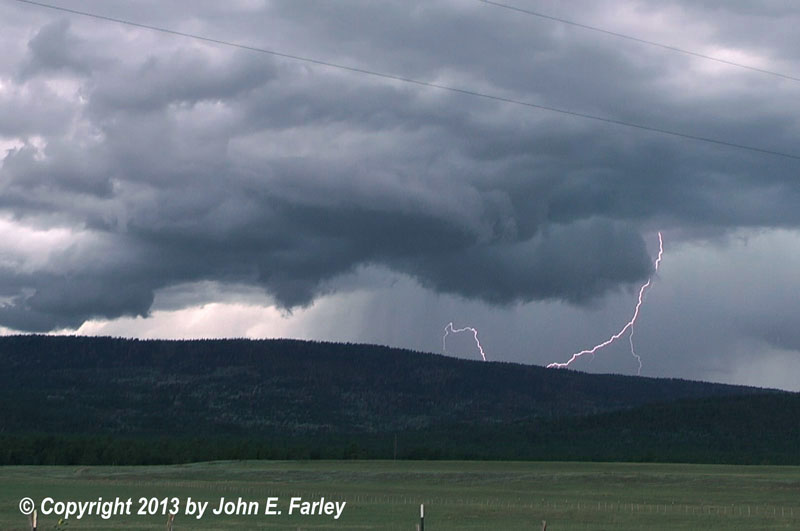 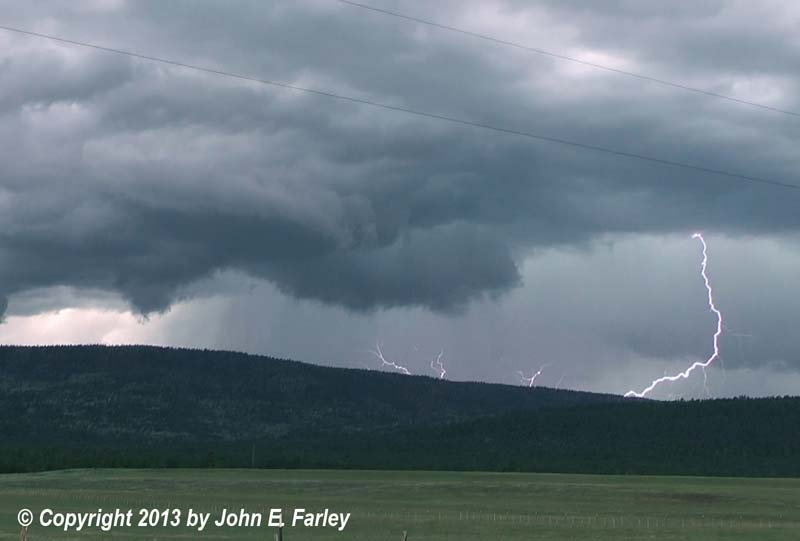 The bottom two pictures, which are video captures from a split second apart, show interesting lightning behavior - particularly in the second frame but to some extent in both, the lightning appears to extend from the cloud to the ground or near it, and then back up again toward the cloud. Although the lowering at the left of the picture looks pretty impressive at this time, some of what you see is scud below and ahead of the lowering, and there was no visible rotation, although there was strong upward motion.

As I mentioned, the storms were forming on the outflow from storms farther west, and this occurred again as a new storm went up immediately to my southwest, apparently on the outflow from the storm in the pictures above and/or earlier storms farther west. As this new cell moved over me, hail began to fall, soft at first but very quickly hardening up into solid hail - all quite small, up to about a half-inch in diameter, but rapidly increasing in amount until it was coming down quite hard. There was not a lot of wind when it started, but the wind gradually increased to around 40 mph or so as more rain mixed in with the hail. The hail fell quite heavily for ten minutes or so, from about 4:10 to 4:20. I parked facing south so I could get video of the hail without a lot of rain and hail coming into the car, and ended up getting my best hail video in a few years. Video of the approaching storm, the hail, and the wind appears below. The video is best if you watch it in the highest definition your connection will allow and full-screen.

After the storm passed over, I headed back southeast toward Pagosa Springs, encountering more hail just north of Lake Hatcher around 4:30 as I caught back up with the increasingly linear storms. A mile or so southwest of Lake Hatcher, the hail was covering the ground in places along the sides of N. Pagosa Blvd.: 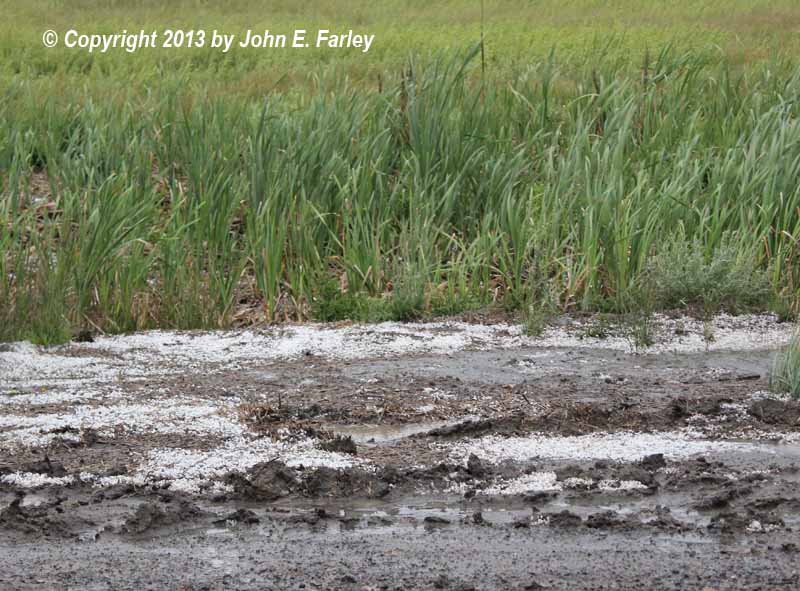 When I got home - another 5 miles or so southeast to near route 160 - my wife said that there had been no hail, and there did not appear to have been nearly as much rain, either. However, a steady light rain with occasional rumbles of thunder gradually increased over the next half hour, with more strong gusts of wind. My guess was around 35 mph to possibly 40 mph at our house, but in the town of Pagosa Springs, 4 miles to the ENE, a gust of 52 mph was measured, and I later noticed a couple trees down along route 160. All in all, this storm was quite a bit more than the normal monsoon storms, and a pretty good chase for only 25 miles or so of total driving.