Managed to squeeze in an impromptu chase in Nebraska while my wife and I were en route from Waterloo, IA to Pagosa Springs, CO. We decided to stop for the night around 6 p.m. in Lexington, NE. I had been watching several storms to our west that looked fairly impressive visually. When we got into our room I checked radar and saw three fairly impressive storms, two with SVR warnings. Both visually and on radar, all three were isolated and looked to potentially have supercell characteristics. The two warned storms were to our west-southwest and, with that I thought was slow movement toward the SE, did not seem catchable before dark from our location. But, with their anvils spreading overhead, I had noticed some mammatus starting to form when we arrived at the motel, so I went out to the parking lot to see what I could see. By this time, there was some very impressive mammatus from the more-or-less merged anvils of the two storms to the west-southwest. I ran back in and got the camera, and managed to get a couple nice shots:

Meanwhile, the third storm, to my northwest somewhere north of Cozad, seemed reachable. So, while my wife took a nap before dinner, I headed west on I-80 15 miles or so the Cozad exit and then north to intercept the storm. As it turns out, though, the storm was not really drifting to the SE - its motion was driven mainly by backbuilding, and by the time I was north of Cozad, it had backed west to north of Gothenburg. I headed farther west through Gothenburg and then north, but by then it had backbuilt further, with the main updraft well northwest of Gothenburg and not too far northeast of North Platte. There was a very heavy precipitation core north and northwest of Gothenburg, and an arcus cloud formed along the south edge of the precipitation. The storm was full of in-cloud lightning, and there was a nearly continuous rumble of thunder coming out of the anvil, with occasionally louder bursts of thunder from the closer anvil-crawlers. Here is a picture showing the core, the arcus cloud, and the updraft base much father west, closer to North Platte: 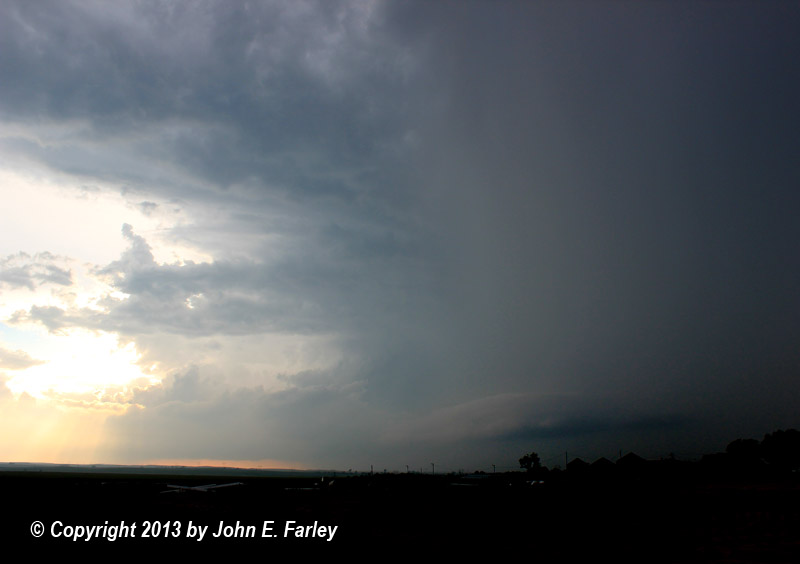 This picture was taken at 7:38 p.m., shortly after the second of three significant weather advisories was issued for this storm. These indicated potential for 40 mph wind, torrential rain, and half-inch hail. I broke off from the storm around 7:55 p.m. to go back to Lexington and meet my wife for dinner at a restaurant next door to our motel - I knew where was no hope of getting much closer to the storm's updraft area before dark, and I was hungry and knew my wife was, too. I could see then that the storm looked to be intensifying, and it did finally get a SVR warning just after 8:30. Ten minutes or so later, it produced a 62 mph gust at the North Platte airport and blew large branches down onto U.S. route 30 near the airport. But by that time it was pretty dark, and chasing it another half-hour would have meant I would not have gotten back until after 9, so I was content to let it go. The other storms farther southwest, incidentally, produced quarter to golfball sized hail, covering the ground in some places, and locally near 2 inches of rain. All of these storms went up on an outflow boundary from a larger convective complex to the south in Kansas.

All and all, this was not a bad little chase to provide a little diversion at the end of what had been a long, boring drive. My first time actually chasing in Nebraska, though some years ago, while at a conference that had been interrupted by a tornado warning, I did watch a rain-wrapped meso move through downtown Omaha.