Overnighting in Amarillo en route from Edwardsville to Santa Fe, I checked the models and SPC outlooks and was surprised to see a decent setup for the next day, Tuesday, July 28, over much of NM east of the mountains. I knew there was decent upper northwesterly flow and a baroclinic zone between the cool air in the Midwest and the heat west of the Rockies, but earlier data had suggested that this would be a little too diffuse to concentrate severe weather in any particular area. However, the 0Z NAM was now outlooking up to 2000 CAPE in eastern NM, and I have certainly seen severe storms a number of times in NM with less instability than that. With surface winds from the SSW and upper winds from the NW, there would also be plenty of directional shear, though most of this shear would be deep layer shear, not low level. In other words, good for supercells, but not particularly good for tornades.

Nonetheless, next morning when I checked data again, SPC had much of eastern NM in a 5% tornado outlook, so I thought maybe an outside chance, especially along some kind of localized boundary. The NAM was showing a little less CAPE than the night before, around 1500, but the RUC was showing as much as 3000 - very high for NM, where limited moisture often prevents such high instability - with the best instability immediately east of the mountains in places like Raton and Las Vegas. Also, some of the models were showing dewpoints as high as 60 - very good moisture for NM. The models suggested that, as is often the case in NM, storms would initiate over or near the mountains, then move out onto the plains into what looked like a pretty favorable environment.

All this was enough for me to deviate from I-40 and take the northern route from Tucumcari to Las Vegas via Conchas Lake. I could see the storms well off to my north and northwest; being in an area with poor data I did not even hook up the computer until I got into an area with better data. When I got to Las Vegas it was obvious that I needed to blast northeast on I-25 and that I could reach the storms within 20 miles or so. After about 15 miles I was nearing the storms and came to one of those "no facilities" rest areas so common in the West - but it had a great view of the storm so I stopped there, got some pics, and fired up the computer. I was pleased to see that the storm I was watching had a SVR warning on it, as did another one farther north near Raton.

It was now around 3 p.m.; I was about 15 miles northeast of Las Vegas and 5 southwest of Watrous. The storm formed a pileous cap under its newest tower, had a lot of CG lightning, looked like it had some hail, and after a while briefly took on somewhat the appearance of a supercell: 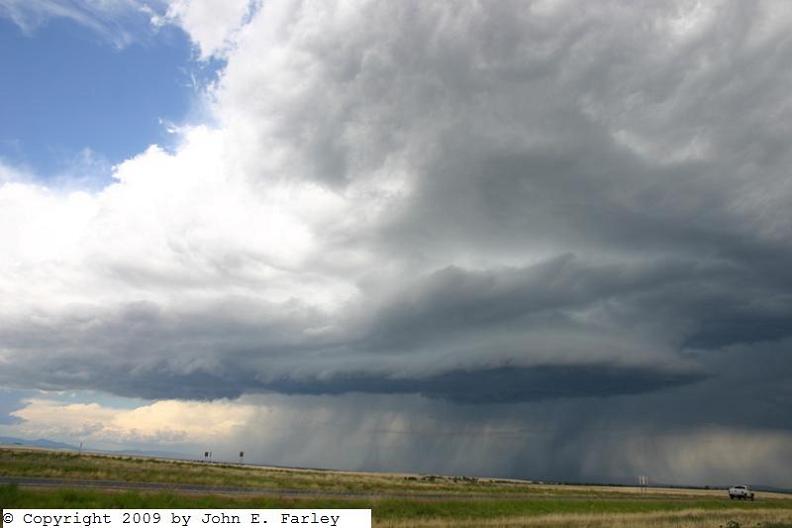 Around the time I took this next picture, a couple minutes after the one above, the storm tripped the meso algorithm on GRLevel3 radar for a short time. I'm not sure if this was a brief attempt at tiny twin funnels, but whatever it was, it only lasted a minute or so: 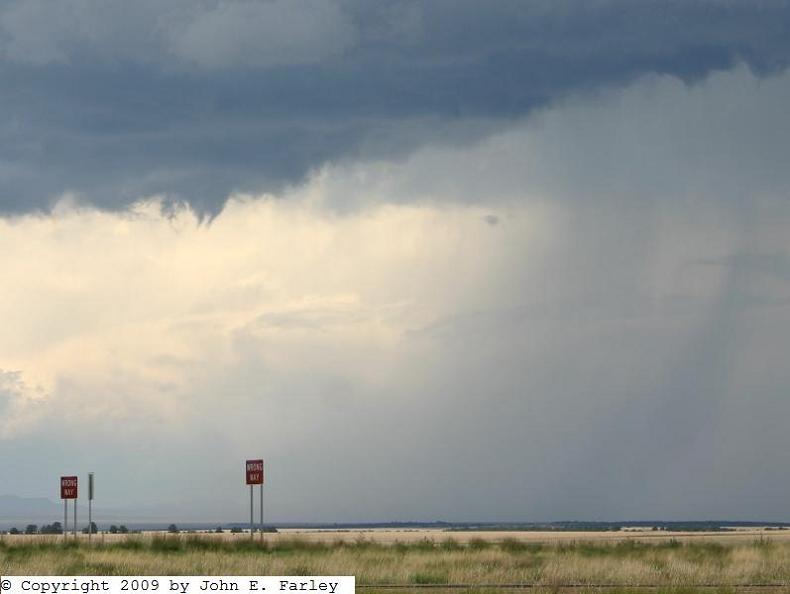 After this the storm weakened a little, and I headed north to the Watrous exit figuring I could either watch it for a while there or head back south on I-25 and get on my way to Santa Fe. However, the storm did pulse up one last time enough to put out a pretty good barrage of CG for 5 minutes or so. The lightning would come in a series of multiple flashes, so I tried to catch it when I first saw a flash and was successful a few times: 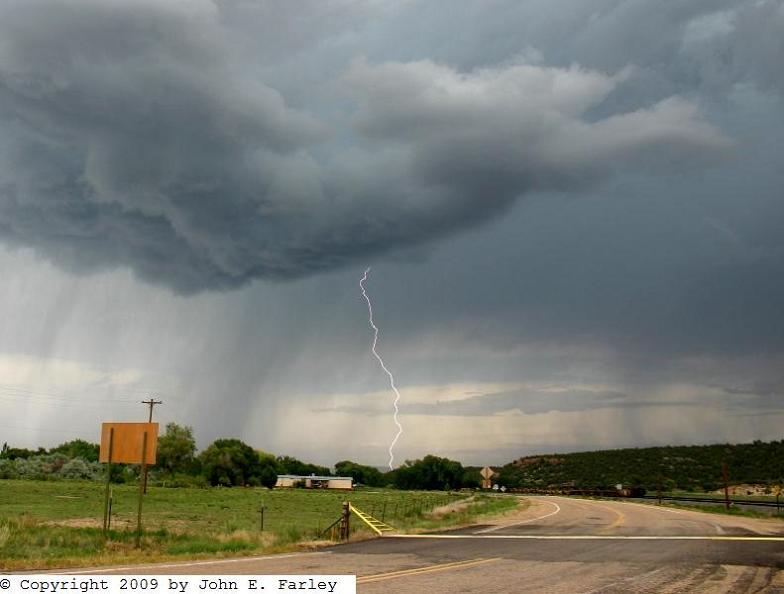 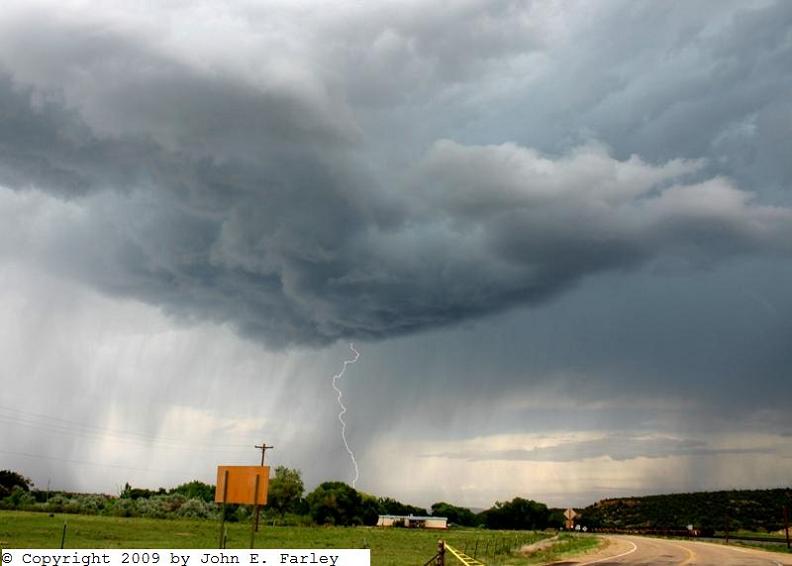 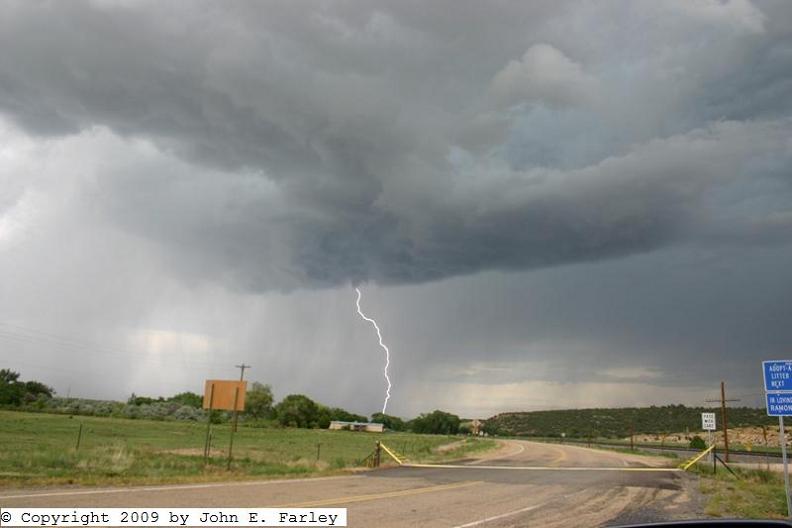 Not bad for only going about 40 miles out of my way!