This was a very impromptu chase southeast of Santa Fe in the mid-to-late afternoon. I had been hanging art most of the day at the Johnsons Gallery in Madrid, NM, so I only had my cell phone to take pictures. However, as I drove toward Santa Fe from Madrid around 3:40 p.m., I noticed strong thunderstorms off to the east, so I decided, despite the lack of data or a good camera, to head east through Galesteo to route 285 between El Dorado and Clines Corners to see what I could see. By the time I got to route 285, I could see this off to my southeast: 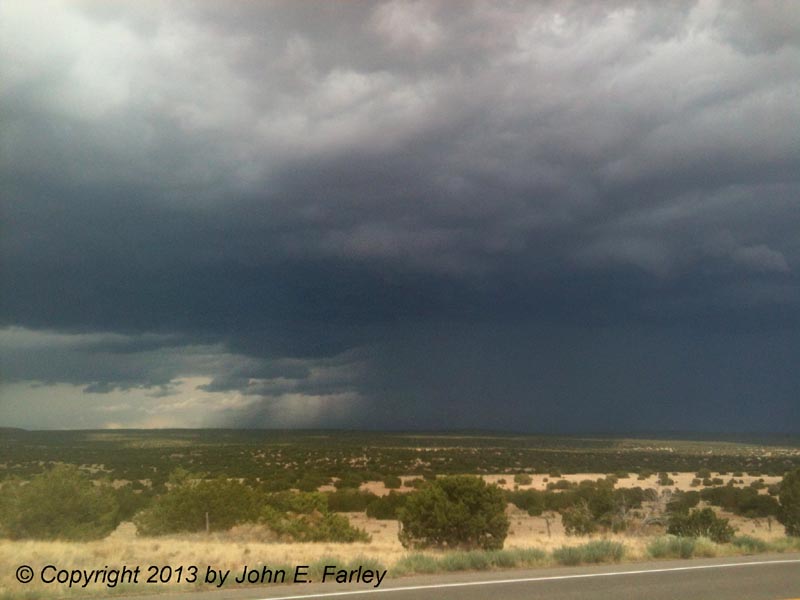 This picture was taken at 4:10 p.m. When I took the picture above, the storm was in the process of cycling as it backbuilt to the northwest. Storm movement at this time was described in one of several significant weather advisories issued by the NWS for this storm as toward the south, but with the backbuilding it was effectively toward the south-southwest, and over time the storm gradually turned right and moved in a general southwesterly direction. As the storm cycled, new and rather intense hail shafts appeared, closer to me and to the west or northwest of where the heaviest precipitation had been in the prevous picture. This is how the storm appeared at 4:27 p.m.: 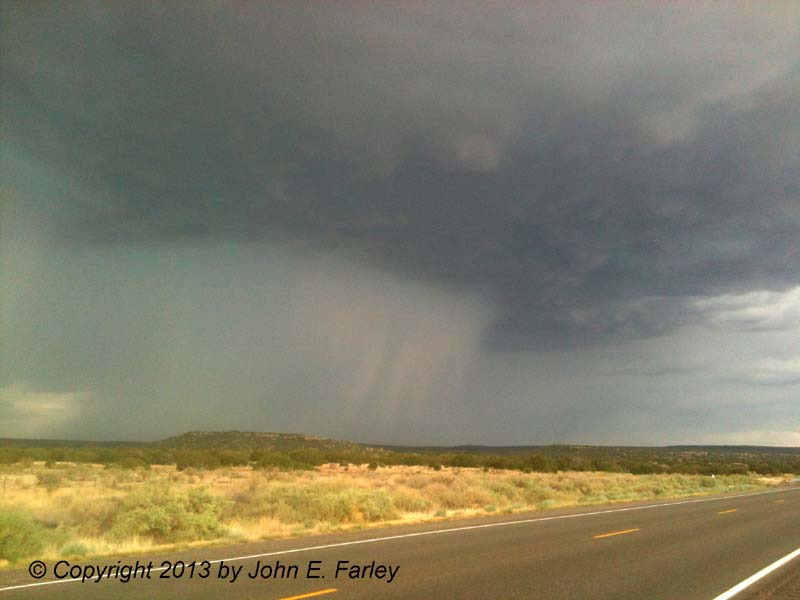 These hail shafts would have been southeast of El Dorado and north of Clines Corners, perhaps halfway between. The storm took on supercell characteristics for a while as it continued to track southwestward from San Miguel County across southern Santa Fe County and eventually all the way to the Manzano Mountains. Just as the hail shafts above were forming, I saw the first of the two gustnadoes I saw with this storm. This one was small but close to me, crossing the road from NE to SW perhaps a half mile ahead of me at 4:19 p.m., just as the hail shafts were starting to form to my east and southeast. I was driving at the time and pulled over as I got a little closer to it, but by the time I was able to get a picture it was dissipating and does not show up well, although it was still there. I had thought at first that it might have been a dust devil, which I had seeen several of earlier, but I realized that now I was in the outflow of the storm, so this dust swirl had formed right on the leading edge of the storm's outflow. This identifies it as a gustnado, not a dust devil.

Around 4:30, I noticed some very weak rotation in a slightly lowered area of the cloud base just to my northeast and to the north or northwest of the hail shafts - probably just south of Lamy. This did not persist very long, so I decided to start back to Santa Fe. But by the time I was in the El Dorado area around 4:50 p.m., I noticed that a large haboob had formed quite some distance to my southwest, so I backtracked to where route 285 crosses the Santa Fe Southern railroad tracks for a better look. This is a fairly high spot with a long view to the southwest, and I watched the haboob surge southwestward, probably somewhere south of Galesteo. By 4:54, it was evident that there was also a tall gustnado (possibly a landspout, but I think much more likely a gustnado) to the left (probably southeast) of the haboob. Although the quality of the picture is poor because it is a cell phone picture and the storm was now quite far away, you can see both features in this picture: 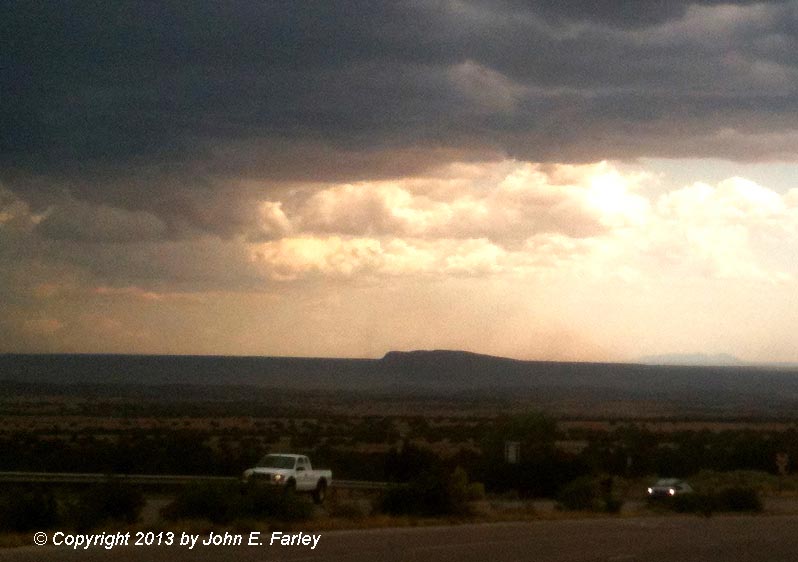 The haboob is just to the left of the distant mountains at the right edge of the picture, and the gustnado is the narrow vertical dust column just left of the closer, smaller ridge. These would likely have been between Galesteo and Moriarty.

So, all told with this storm, I saw hail shafts, some cloud base rotation, at least two gustnadoes (there may have been one or two others, but two that I am sure of), and a haboob - not bad for 60 miles or less of driving. This storm covered the ground in Moriarty with what looked like a couple inches of hail on a pic shown on the news that night. Another storm farther east, not to be outdone by mine, reportedly dropped 1-2 feet of hail near Santa Rosa, stranding drivers for 4-6 hours and causing considerable damage. You can see a media report and pictures of the Santa Rosa hail by following this link.