During the afternoon, thunderstorms developed over the San Juan Mountains north, northwest, and northeast of Pagosa Springs, CO. By a little before 3 p.m., warnings and advisories began to be issued for a couple of the storms, which were gradually intensifying.

At 2:48 p.m., a significant weather advisory was issued by the National Weather Service in Grand Junction for northwestern Archuleta County and nearby parts of Hinsdale and La Plata Counties for half-inch hail and wind over 40 mph.

At 3:02 p.m., a Flash Flood Warning was issued by the National Weather Service in Pueblo for the area around Wolf Creek Pass until 5:00. This warning included numerous creeks and small streams in parts of Mineral and Rio Grande Counties.

The storm for which the Flash Flood Warning was issued was a single-cell storm, and at times had a hail marker on radar to 1.5." The other storm was more linear. Both were moving rather slowly and erratically, but in general to the SE or ESE.

I decided to head up Piedra Rd. around 3:30 to intercept the line, which was moving my general direction and thus seemed the easier of the two storms to intercept. A new, and at first weak. cell was going up ahead (SE) of the line and SW of the Wolf Creek cell - forming on outflow from the line, it looked like. I thought I would poke through this new cell, which was not far NW of where the Piedra pavement ends, in the ranchlands SE of the Piedra River, and get between it and the original line. However, this cell intensified more or less directly over my head: 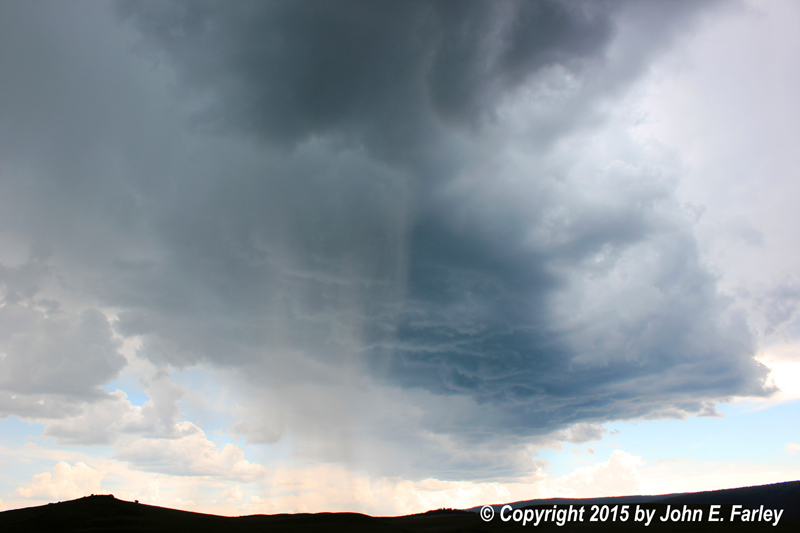 Soon I was in heavy rain and 1/4 to 1/2-inch hail. Most of the hailstones were pea-sized, but a few half-inch ones mixed in.

A short video of this hailstorm can be seen here:

By this time, the original line of storms to my northwest was fizzling out, although the Wolf Creek storm remained strong and had some CG (cloud-to-ground) lightning. But it looked like the space between the new storm and the original line might be filling in with rain. Eventually, though, I got past the new cell and set up just south of where Piedra Rd. crosses the Piedra River. The Wolf Creek storm cell, or perhaps new convection that formed just west of it, was to my NE and still strong, with the new convection to my SE and intensifying. I set up for lightning and got several flashes as the two storms gradually merged, producing torrential rain and copious hail in the mountains and rain and some hail southward to just N of Pagosa Springs. While the hail I passed through had not been particularly heavy, much heavier amounts fell farther east, especially in the mountains where the ground was partially whitened. In fact, at 4:19 p.m. a second significant weather advisory was issued, mentioning the possibility of 1/2-inch hail and wind over 40 mph in Pagosa Springs. I don't think the hail quite got into Pagosa Springs, but half-inch hail was reported 3 miles north of there at 4:32 p.m. At my location well NW of there near the Piedra River, I got gusty outflow winds of around 30-40 mph. shortly after setting up, apparently from the convection over the mountains to my northeast.

Here are some of the lightning pictures I got at that location: 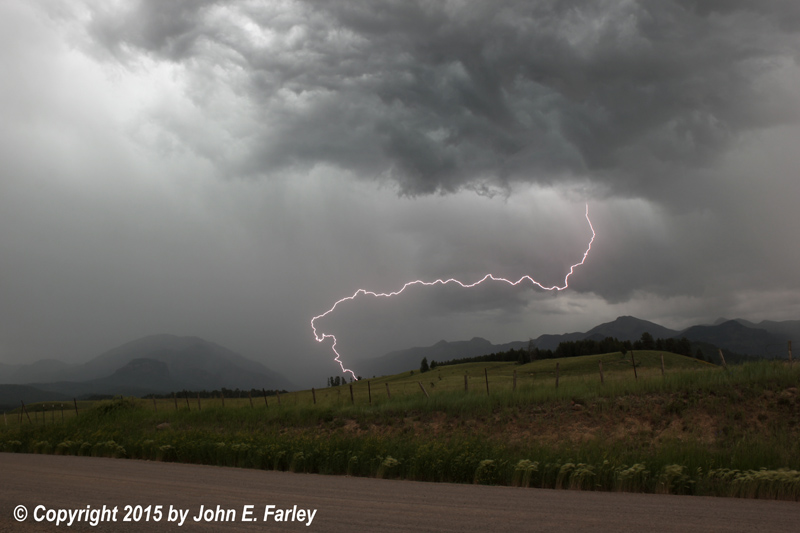 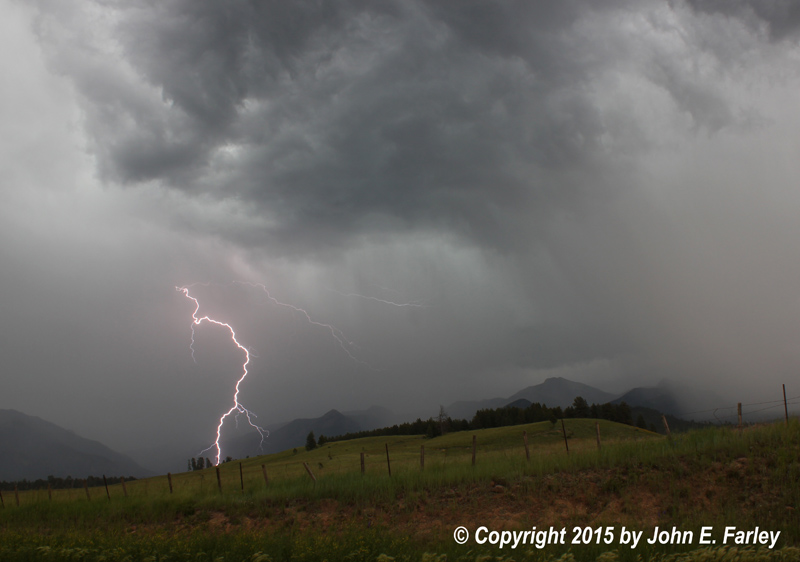 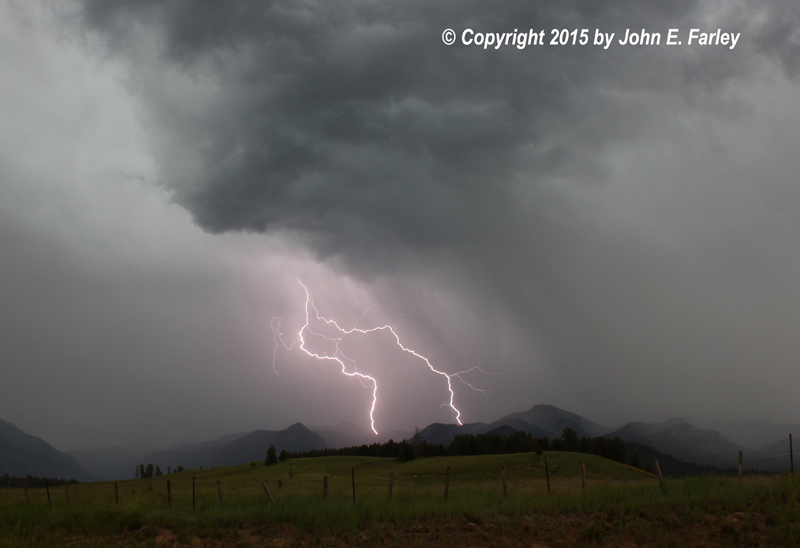 A more zoomed/cropped version of the picture immediately above can be seen here.

You can see from these pictures that some of the lightning was striking in the valley just toward me from the mountains, while other bolts were striking up in the mountains. After a while the rain caught up with me at this location, so I headed back toward Pagosa Springs. The cluster of storms seemed to be accellerating somewhat to the southeast now, and from this point on I remained behind the heaviest precipitation, though in light rain much of the time. I stopped at a couple locations a mile or two north of where the pavement ends on Piedra Road, for additional photos, but by now most of the lightning was pretty far away, well off to the southeast. I did manage to catch this bolt as a pickup truck passed me, creating some interesting motion blur along with the lightning: 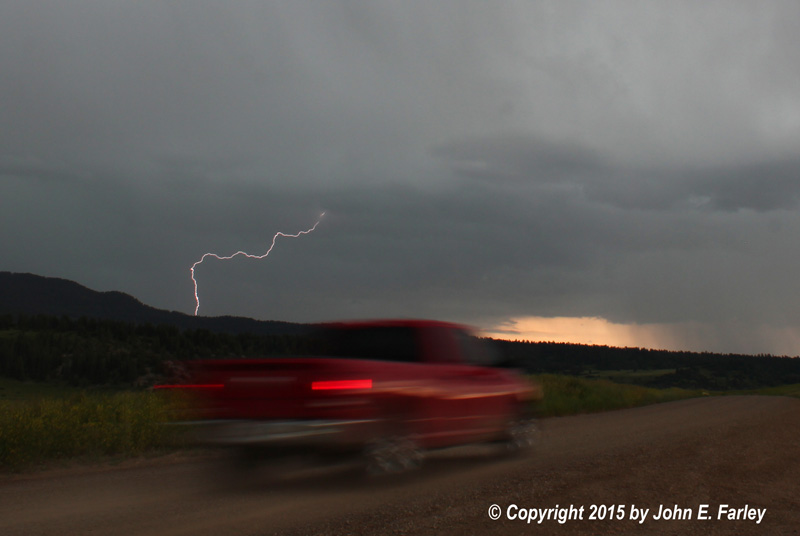 Not a bad outing for only driving about 15-20 miles from home, including some of the best lightning I have photographed this year.