Originally I had figured this mostly as a travel day to get in position for the predicted "big day" the next day in southern Kansas or maybe northern Oklahoma. I had booked a room in Lamar, CO to be in position for a chase the next day somewhere east of there. While I figured I might see a storm along the way, this day had not really looked like much of a chase day. Until the evening before and especially the morning of, that is. Evening model runs hinted at somewhat better moisture return behind a back-door cold front that had moved into eastern Colorado Friday and Friday night. With southeasterly flow at the surface and westerly flow aloft, there would be some directional shear, though wind fields would not be particularly strong. By the morning of, the morning model runs suggested that moisture return looked like it was going to happen with dewpoints at least in the 50s and CAPE perhaps getting into the 2000 range over southeastern CO. So I thought there was some potential in southeastern CO, and considered leaving earlier than I had planned to be there in time for some storms. However, SPC still had just a marginal risk on the 13Z outlook. But in the 1630Z outlook, they upgraded much of eastern CO to slight risk, apparently seeing the same things I was seeing on the morning model runs. So I headed out around 11:30 a.m., figuring that way I would have time to chase any storms that developed for a while before getting to Lamar for the night.

1:00 - En route to the plains in the San Luis Valley, I photograph a lenticular cloud over the Sangre de Cristo Mountains.

2:40 - After crossing La Veta Pass, I see a towering cumulus cloud which is a little NE of Trinidad. This will become the first storm I chase. This gives me hope that with the increasing humidity, instability, and wind shear, I might get some good storm action near the Raton Mesa. As it turns out, that will have to wait for tomorrow, but I decided to drop south to Trinidad then east on 160 or northeast on 350 depending on the storm's movement. Most of CO east of the mountains is now under a severe thunderstorm watch, along with the northeast corner of NM and the far western parts KS and the OK Panhandle.

4:00-4:30 - The TCU has indeed become a thunderstorm northeast of Trinidad, but it weakens as it moves southeast through the Kim, CO area. Another storm develops down the line to its southwest, but this one does not do a whole lot, either. There is also another storm farther north near Rocky Ford.

5:00-5:45 - The Rocky Ford storm looks rather weak and LP-ish, but is rather pretty at times. Since I can intercept it between Kim and La Junta and since that is on my way to Lamar, I head north from Kim for an intercept. The storm has some narrow rain/hail shafts, and I stop a few times for photographs. I intercept it 10 miles or so south of La Junta as it crosses the road ahead of me: 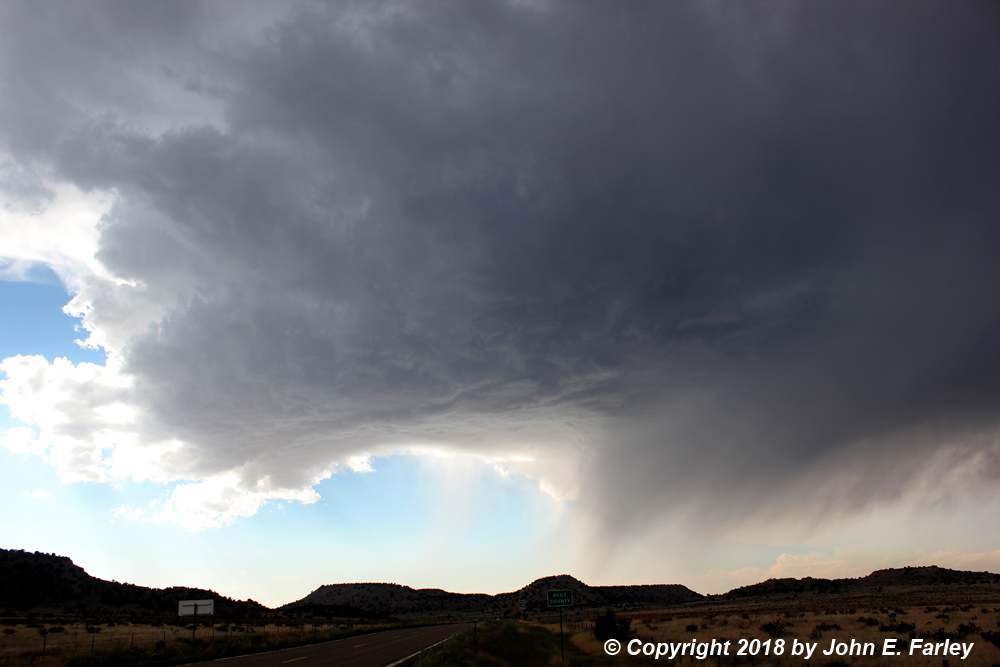 After continuing north, I see accumulated hail along the road, but there was no safe place to stop so I don't know how big it was.

While the storms never really got going this day on the Raton Mesa, they did on the Palmer Divide. (I had favored the Raton Mesa in part because of its greater proximity to my route but also because I thought with the moisture coming in from the southeast, conditions would be more favorable there. But it turned out to be the Palmer Divide where storms really got going.) Those storms were moving to the ESE, with the tail end of the line north of La Junta. So I now figured I would have a play on these storms along my way to Lamar.

6:30-7:00 - I head north on a north-south road that intersects US 50 a little east of Las Animas, CO. This will take me to the tail end storm of the line of storms that initiated on the Palmer Divide. Both this storm and another one to its east, north of Lamar, are SVR-warned. I see the meso of this storm to my northwest as I head north, and there even seems to be a brief needle funnel under it: 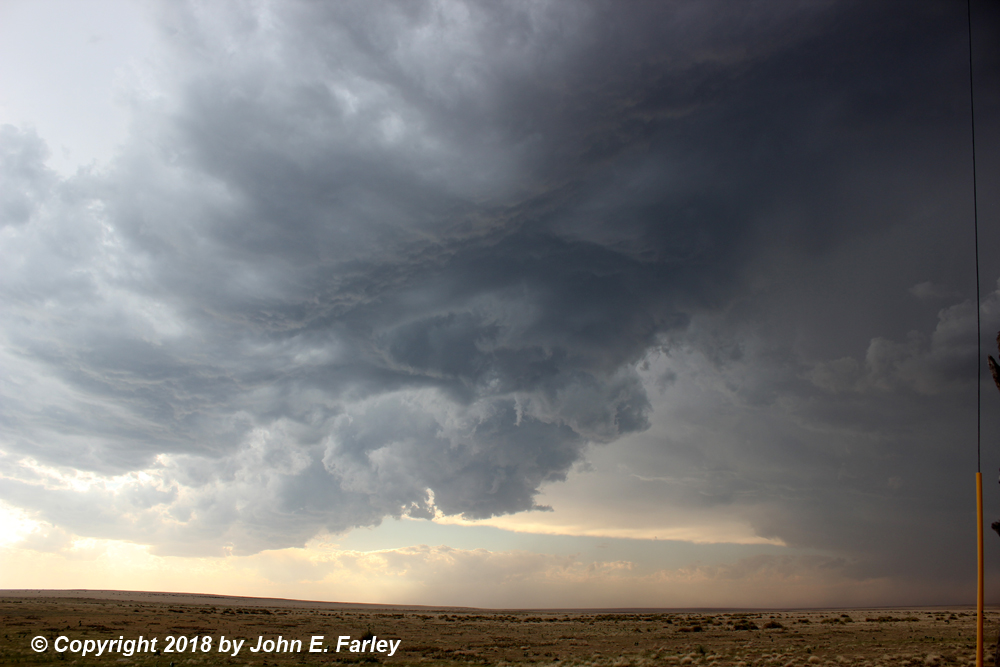 There is also a lot of blowing dust south and southwest of the leading edge of the storm from outflow. By 7:00 the storm is weakening and transitioning into a small, weak bow echo. This was evident on radar, and it can also be seen in this picture. At this point, I figure the show is about over, but the storm will have different ideas.

7:30-8:00 p.m. - As I am driving east on 50 toward Lamar, I notice updraft towers in the bow-head area to my north. There is also a rather sudden increase in CG lightning in that area. It occurrs to me that a bow-head mesocyclone could be developing. This occurs when rotation develops at the north end of a bow echo, where is exactly where these updrafts and lightning bolts were. I decide to head north on 387 just NW of Lamar to check this out. Sure enough, when I get close enough I see a pronounced lowering, with lots of lightning around it. So much that I get this picture of the lowering and a bolt of lightning without even having to use the lightning trigger. 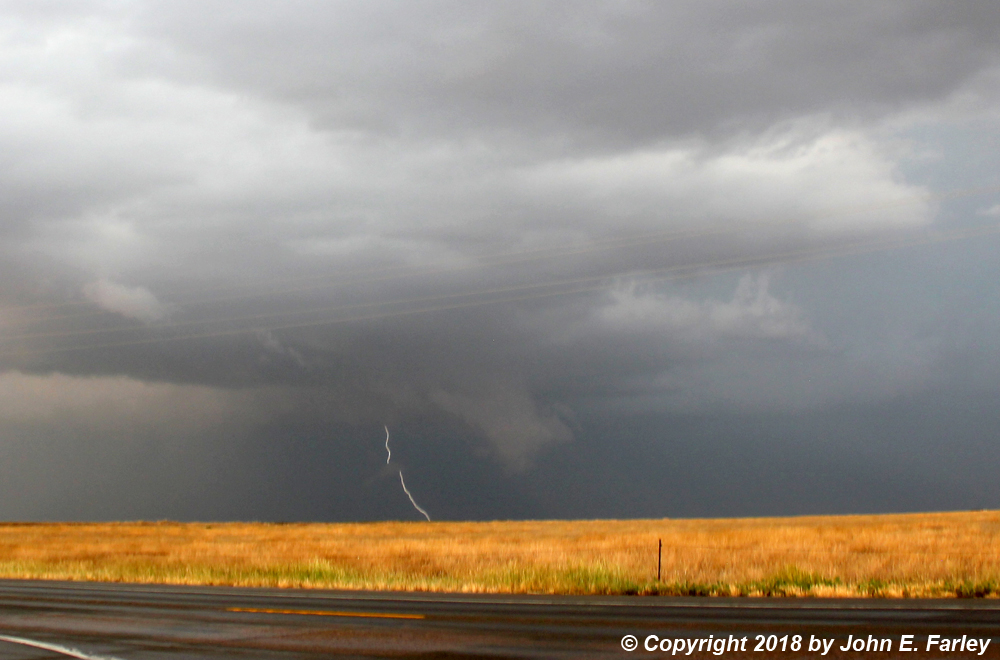 This was from perhaps 8 miles or so NW of Lamar, looking NE. After a few minutes the lowering moved east and became less visible through the rain from my angle, so I headed back south toward Lamar, thinking the show was over. But after I got back on 50, just NW of Lamar, the lowering became visible again, and now the setting sun was hitting it: 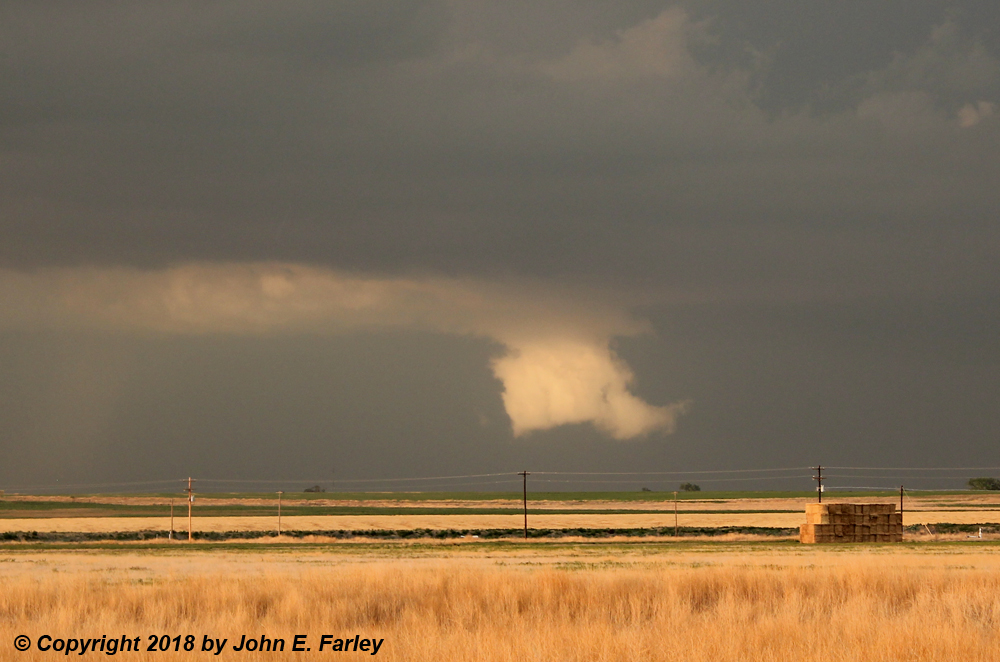 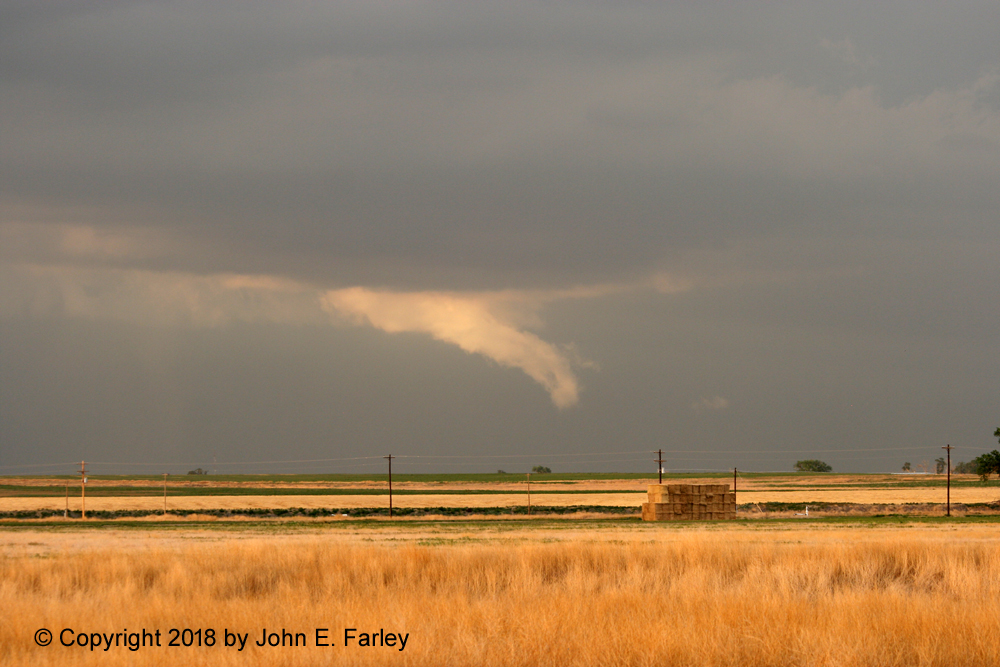 Often features associated with bow heads are wrapped in rain and hard to see, but I was in just the right place, twice. So this experience just before reaching the town I was heading to for the night was a real stroke of good fortune - I never have really been in a good position to see one of these before!

Chase distance for the day: 410 miles.