Today, I was debating northeast MO vs. west-central IL. Starting from West Union, IA, where I ended my chase the previous night, I headed south for a preliminary target around Canton, MO. The NAM and RUC models disagreed somewhat on where precip would break out this afternoon, but that general area - northeast MO into central IL - had the best combination of CAPE and shear (which was more unidirectional today than the previous day, a negative factor for tornadoes). Still, the airmass would very unstable with CAPE around 3000, and there would be good speed shear and, unlike the previous day, less cap and a forcing mechanism, a cold front, to ensure that storms would in fact occur. I figured that heading for the area around Canton, MO or Keokuk, IA would allow for either going west into MO or east into IL depending on how things set up. In retrospect, I would have been better off going more east, e.g. taking 80 through the Quad Cities then 74 down to Galesburg, but I thought it would be better to be a little farther west than that, as the storms might line out rather quickly once they formed. Near Mt. Pleasant, IA around 1:30, I noticed some TCU going up to my east, so decided to blast east on route 34 to intercept, as nothing much was happening yet in northeast MO. (There were some storms farther west, but at that time they were dying out once they got to central MO.) I guess the RUC model, which had initialized convection in central or west-central IL, was winning out.

A cluster of storms that soon appeared to have some supercell characteristics went up south or southwest of Galesburg, and I chased them from there to just east of Bloomington. But coming from the west, I was on the wrong side for most of the way, and each time I would catch up to a storm and finally get around to the south of it enough to see the updraft base, it would weaken and the next storm east become the dominant storm. Finally east of Bloomington I got around to where I could see the base of the last of the initial cluster of storms, and at that time the strongest of the 3 I intercepted, but then it weakened, too. Yet another storm went up southeast of the Bloomington-Normal area, and it eventually became the storm of the day, earning several tornado warnings just south of Danville and spawning a reported tornado or two (which several chasers who were on the storm have questioned, however). This storm was, I thought, too far southeast for me to catch, given the trouble I had catching the storms from the west that I did manage to intercept, and having now reviewed radar loops, I am convinced this is the case, especially since the meso tracked south of I-74 - I could not have gotten around to the south side of the storm.

The middle storm of the three that I did intercept did produce 2-inch hail and estimated 70 mph wind just west of Peoria, so it was a beast, at least for a little while. However, I was on the wrong side of this storm - just to its northwest - at the time to see the most interesting part of the storm, which was blocked from my view by rain and hail. I did, however, observe a lot of motion but no real rotation in the lowered area under the updraft of the storm just to the north of of the one that produced the 2-inch hail: 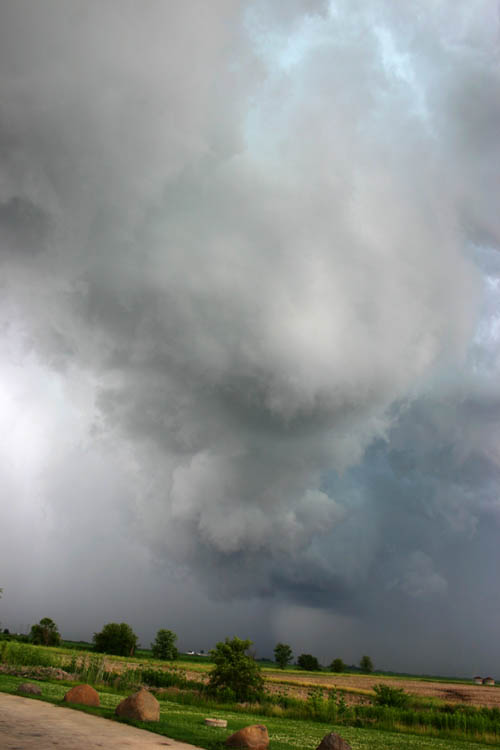 Soon, the two storms merged, as the northern one was absorbed into the stronger one just to its south that produced the hail. I observed a tremendous amount of thunder and lightning at this time, too - nearly continuous thunder coming from the two cells to my east and northeast. Once the storm crossed I-74, I continued southeast and got around to where I could see the updraft of the storm that had produced the 2-inch hail. The storm was weakening now, but was still strong enough to produce wind damage along with small hail in Woodford County. But now my attention was turning to the next storm down the line, which was producing large hail in Tazewell County and for most of the time I had been watching the storms on radar had been the strongest of the cluster of three storms. Again, though, I was on the wrong side (northwest) of the storm to see the updraft base, though I could get occasional glimpses of lowerings under the updraft base through the rain and hail. As the storm, still SVR-warned, moved over Bloomington-Normal, I was finally able to punch through the back edge of the precipitation (I hit heavy rain and gusty wind, but no hail) and get south of the storm on the southeast side of the Bloomington-Normal area. Once there, I had this view: 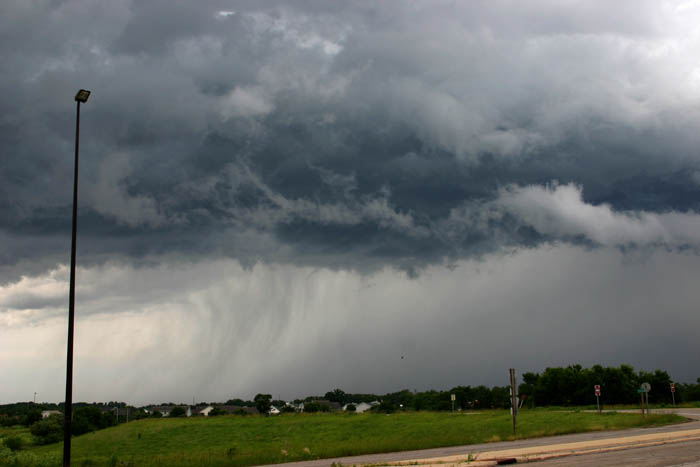 I would suspect the storm was still producing some small hail at this time, but it was weakening and soon the SVR warning was allowed to expire and not renewed. As I said earlier, I could see more storms to my south and southeast, and one of them would go on to be the storm of the day, but I did not think I could catch them without going a very long distance, and my review of the radar loop convinces me I could not have gotten south of the storm associated with the tornado reports by the time of the reports. Meanwhile, I was hearing reports of a bow echo moving toward Springfield and also noticed new storms going up southwest of Bloomington, so decided to head back that way, which would also take me toward home. Finally I was on the right side of a storm to see something, and as I headed down I-55 through the Funks Grove area, I observed a ragged wall cloud (and quite a bit of CG lightning) on the closest of the new storms to Bloomington: 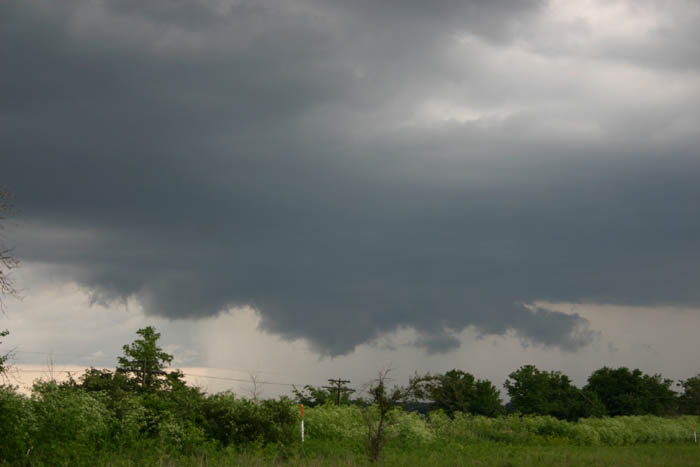 I exited at McClean and headed back up old route 66, stopping a little north of Funks Grove where I was within a mile or so of an area that was still lowered under the base of this storm's updraft: 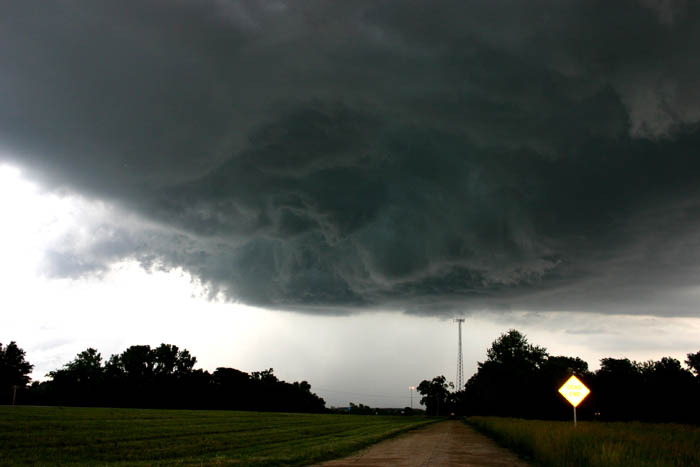 This was about the peak of strength that this storm attained however. Around this time, this storm produced 3/4 inch hail in Bloomington at 5:15, but thereafter it weakened.

I let that storm go, and turned my attention to the oncoming bow echo, and to getting gas in Lincoln, as I was getting quite low. I originally thought I could intercept the bow echo between Lincoln and Springfield, but it was already hitting by the time I exited at Lincoln to get gas. At the gas station, I encountered wind I would estimate around 50 mph, about 10 minutes of heavy rain, and several nearby lightning strikes, as the northern end of the bow echo racing in from the west went through Lincoln. No hail, though, and I think the wind remained sub-severe. Naturally after that passed over racing east at 50 mph there was a TOR warning issued just east of Lincoln, but apparently nothing came of it. On the way home to the STL area I could see impressive towers at the tail end of the squall line associated with the cell there that became a bona-fide supercell, but it was too far east for me to catch. There were 2 TOR warnings issued for that cell, and rotationg wall clouds and funnel clouds reported by spotters but no tornado.

Congrats to those that managed to hunt down the Danville cell - even if the tornado reports were not accurate, it clearly turned out to be the best storm of the day. In general, tornadic storms were very hard to come by today due to the largely unidirectional wind profiles - plenty of speed shear but little or no directional shear. And just too darned many storms. Now if we could have just averaged the number of daytime storms between today and yesterday, both days would have been better.