The Setup: This chase setup looked pretty similar to the previous day, with good instability and shear across much of eastern CO, except maybe better. Instability would extend farther west today, with the added element of a Denver cyclone and a potential DCVZ (Denver Convergence Vorticity Zone) boundary setting up near the Palmer divide. This, combined with the better instability than yesterday in that area and the upslope flow, could lead to development of an intense supercell or two over the Palmer Divide, which would then move E or ESE into what several models agreed would be an area of very unstable air (CAPE 3000 or higher) over east-central CO. Accordingly, the best plan seemed to be to set up perhaps somewhere north of Boone, CO to wait for storms initiating between Colorado Springs and Denver, hoping to catch them in the upslope flow over the Palmer Divide

The chase: After buying a Canon lens cover to replace the one I lost yesterday, I headed west from Lamar around 11 a.m., intending to work my way toward the aforementioned Palmer Divide target. As I worked my way west through several construction zones, storms began to fire early near Walsenburg/Pueblo and over the mountains west of Denver and W/NW of Colorado Springs. After lunch in La Junta, I continued with the same general strategy, but now with the realization that it might be more a matter of storms moving into the area where I thought they would initiate than actually initiating there.

I decided to proceed directly west from Fowler on a back road rather than staying on route 50 so I could watch what was now a line of strong storms that was extending eastward from somewhere near Walsenberg, probably extending eastward for fifty miles or so. As I was watching this line of storms well to my south, a couple strong dust devils - totally unrelated to the storms - popped up just to my south in the rather strong southeasterly surface flow. With the dust devils being strong, rather large, and close to me, I was able to get some of my best dust devil video to date:

Again, these were unrelated to the storms to my south - way too far from them - but did seem to form in a band of strong southeasterly wind that was somewhat stronger than the generally-prevailing southeasterly wind in the area. I did toy a couple times with going after the storms to my south, but thought the better potential was to my north with storms that would develop or move over the Palmer Divide, so I stuck with my original plan and headed north from Boone on Boone Rd. Just a few miles out of town, I noticed that the storms to my south were kicking a very large dust plume, likely associated with a microburst. This was well down the line (east) from the most intense storms in the line precipitation-wise, but there was an updraft base, shelf cloud, or some similar feature above where the dust plume formed. Hard to tell, since according to radar the storm was a good 20 miles away, though the outflow may have been a little closer than that. I got out the video camera and zoomed in, and soon two or more gustnadoes formed out ahead of the microburst: 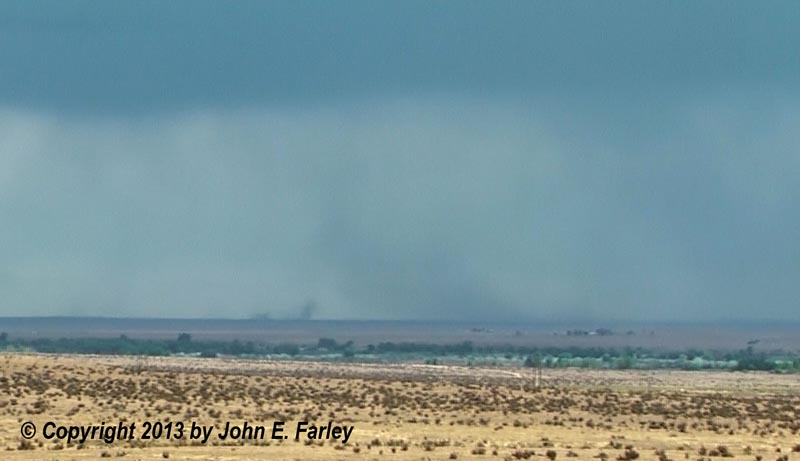 For several minutes the dust plume persisted and gustnadoes formed just ahead of it. I was fortunate this happened while I was in a high spot with a very long view to the south and southeast, or I would have missed them. As it was, I could see them quite well, considering I was fifteen to twenty miles away.

Eventually this activity subsided, so I continued on to the north, hoping to intercept either the main line of storms or anything that went up ahead of it over the Palmer Divide somewhere east or northeast of Colorado Springs. It was evident that the storms had developed earlier and, especially, farther west, than had been expected. The storms formed over the mountains, with a severe storm even as far west as the western San Louis Valley near Saguache. I noticed there were a couple tornado warnings in the Denver area, but did not know until later that what would turn out to be the only tornado of the day in Colorado had already touched down at Denver International Airport. But what I could see was that the storms were intense, with SVR warnings popping up in a number of locations in addition to the TOR warnings around Denver, and that they were linear and multicellular, in addition to being largely over the mountains except for the storms right around Denver and the line of storms to my south extending east from around Walsenberg.

I didn't think this boded well for my chase day, but did not really see any game in town except to continue north and try to intercept something over the Palmer Divide - either the line of storms extending southwestward from Denver or maybe, if I was fortunate, an isolated storm that might go up ahead of the line. There indeed were some cumulus clouds out ahead of the line, but at first nothing very big or impressive. But by around 3:30 or so, a couple of the cumulus ahead of the main line began to rapidly tower upward, and soon it became evident that an isolated storm would indeed go up ahead of the main line. Indeed that is what happened, roughly between Ellicott and Falcon. By this time I was in the area, turning west onto Route 94 at Yoder, and was able to get perfect position on the new storm northwest of Ellicott. Problem is, though, that the approaching line of storms was now getting into the Colorado Springs area, with SVR warnings popping around there like crazy, and it would only be a matter of time before the new, isolated storm just to my northwest would be absorbed by the main line. Here are a couple pictures I managed to get of the isolated storm before it got swallowed up by the approaching line: 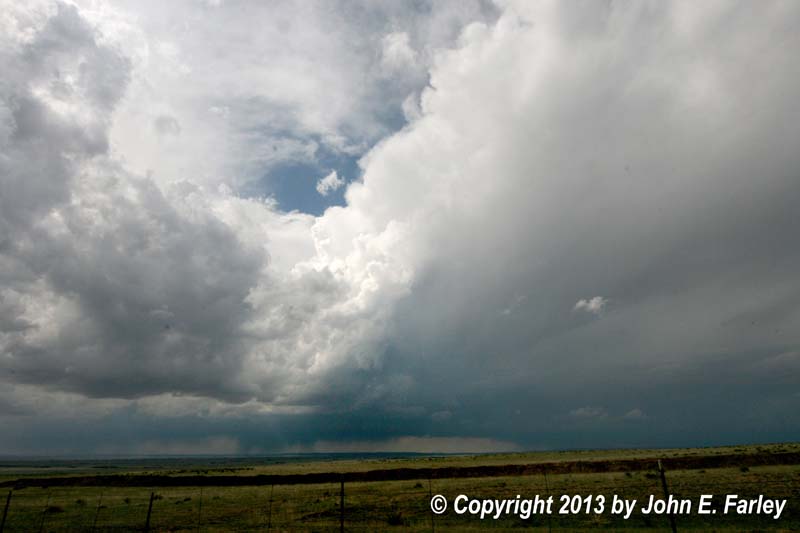 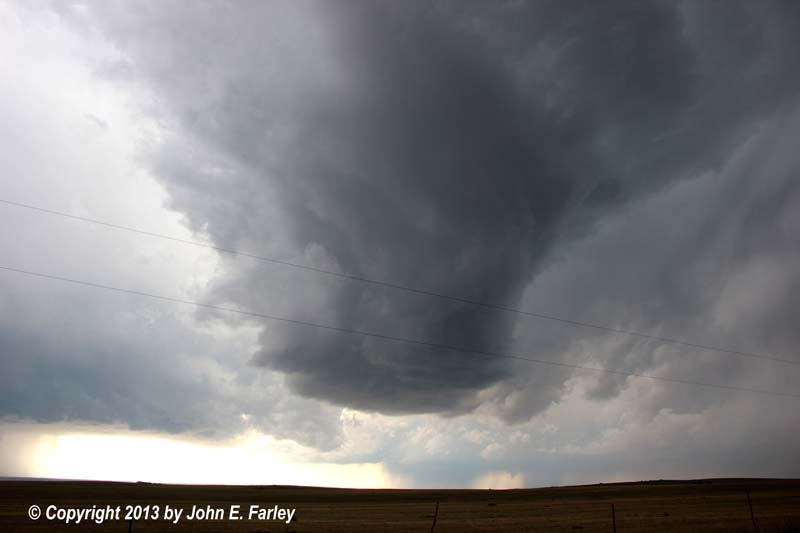 In the top picture, the sunlit updraft tower is the updraft of the isolated storm. The bottom picture shows the base of this cell shortly before it got absorbed into the line. I really think that, had this storm been able to stay isolated instead of getting absorbed into the line of storms behind it, it would have rather quickly become supercellular. It was certainly trying. And moving over the Palmer Divide in those atmospheric conditions, who knows what it might have done? But it was not to be.

Notice also in the second picture just above that in the distant of line of storms, there is a lowering between two areas of heavy precipitation, just below and to the right of the base of the nearer, isolated storm. This area caught my attention and I zoomed in with the video camera, even though it was a good 20 miles away from me. The lowering in the picture above is scud, but it did develop a wall cloud for a while and formed what have been some skinny, ropy funnels. Not sure if they were that or just persistent scud fingers - remember they were 20 miles away - but they did look interesting at times when I reviewed my video later. This one, for example, did have the look of a partially condensed funnel for a while: 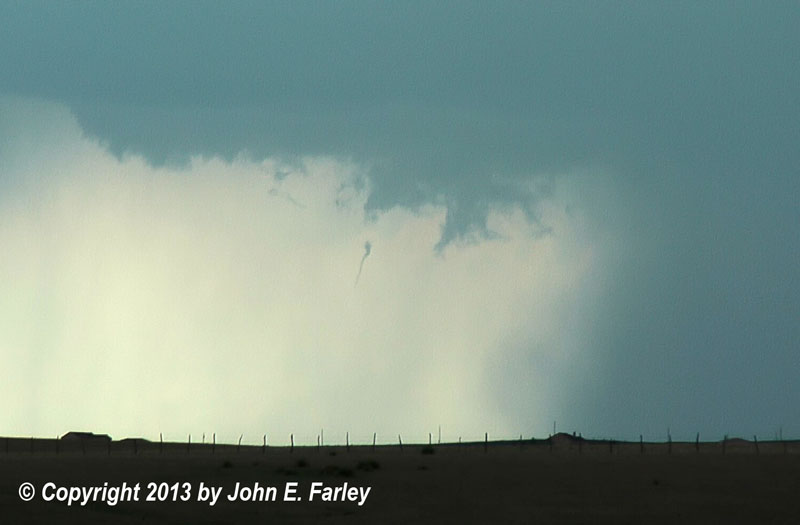 Meanwhile, I was seeing very frequent CG and getting lots of thunder from an intense storm to my southwest, over the southern and southeastern parts of the Colorado Springs metro area, where there were numerous reports of hail up to golfball size between about 4:00 and 4:20 p.m. Around that time, the storm over Colorado Springs built to the north, forming a lowered area just to my west that at first I thought might be a wall cloud, but in fact was more of a shelf cloud. The motion in the lowered area was violent, and lots of CG lighting began to blast down just to my west. A pronounced rainfoot formed at the north end of that storm, just to my west, and I was able to get video as a wet mircoburst surged just east of Falcon, producing a measured 69 mph wind gust and 1-inch hail around 4:30. An arcus cloud formed close to the ground just above the microburst, and became lit by the sun: 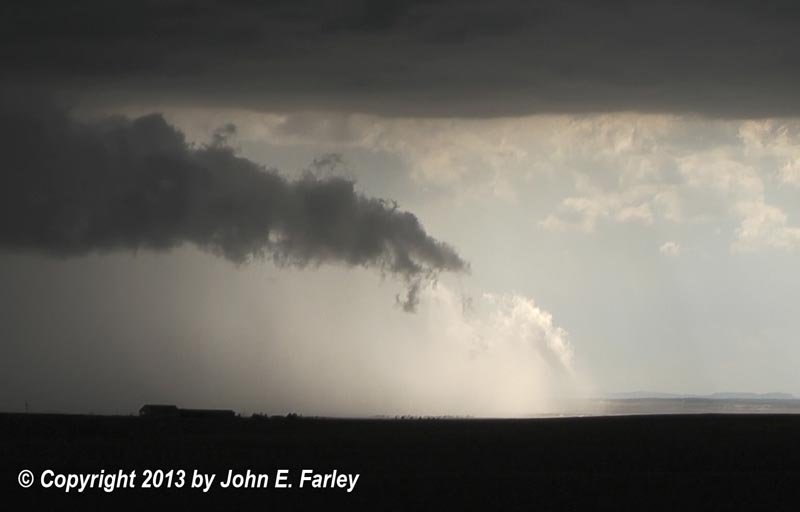 Here is a short video, in which you can see the lowered area, the CG lightning, and the forward surge of the microburst:

By this time, the line of severe storms was surging east, swallowing up what had been the isolated cell ahead of the line, and was ready to swallow me up, too, if I did not blast east, so I did. Got a few last pictures of the now-very multicellular storm in brief stops as I headed east. The surge that had pushed just east of Falcon continued northeastward, producing several hail reports up into the Calhan area. I needed to work my way south to head, at some point, toward home, but did not want to use the N-S gravel roads with the storm moving in, so went east to 71, then south. The tail-end storm of the earlier line extending east form Walsenberg had moved east to somewhere southeast of Rocky Ford, and I stopped to get some lighting pictures, but the storm was considerably less intense now.

After passing through Rocky Ford for the second time today, I headed southwest toward Walsenberg, where I would spend the night before heading the rest of the way home to Pagosa Springs the next morning. Along the way, I stopped for a few sunset pictures of a large distant supercell to my south near Raton, NM, and of wind turbines and a shower to my northwest silhouetted by the setting sun: 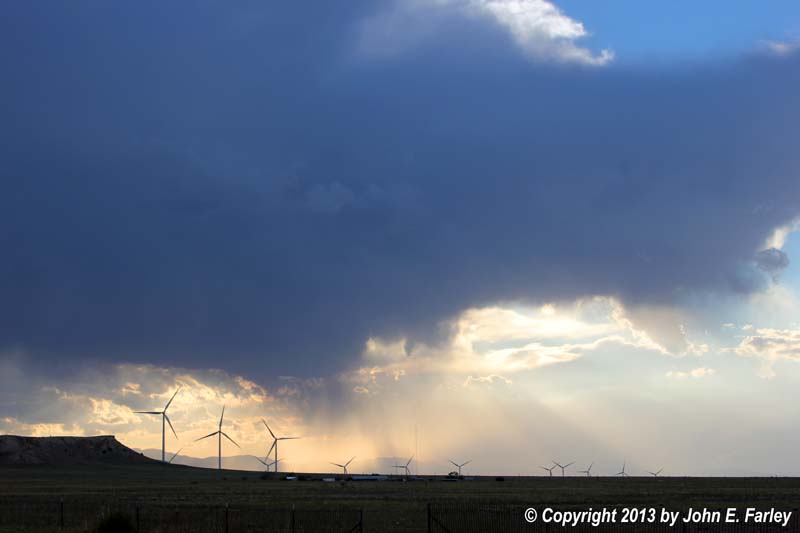 Given that I was able to document a couple large microbursts and some distant gustnadoes, as well as getting some of my best dust devil video ever, this really was not a bad chase at all. But the day was a bit of a disappointment compared to what could have happened, had an isolated supercell formed and been able to sustain itself over the Palmer Divide.