I managed to salvage a little out of a rather disappointing day. I have rarely seen severe weather parameters as favorable as they were today over Iowa, except (and a BIG except) for the cap.

Around 6 p.m., I noticed some TCU trying to bubble up south and southwest of the Waterloo-Cedar Falls area, along the outflow boundary/warm front that was moving northeastward across Iowa. They kept geting stopped by the cap and blown apart by the extreme wind shear. Only a few really made it past what you could call moderate cumulus before geting blown apart. However, it was obvious they were trying - how many times have you seen a beavertail like this with what could only be called a moderate cumulus cloud: 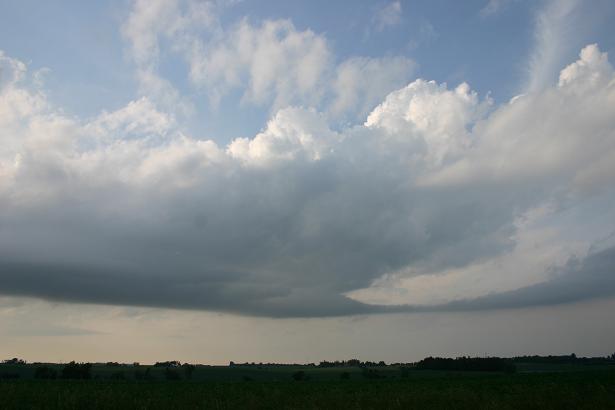 This was enough to get me to follow these clouds, to see if they could break the cap - obviously they wanted to. As the cloud above passed over Cedar Falls, I worked my way through Waterloo and up route 63 to route 3 where I could head east and get back ahead of the area of agitated cumulus. I stairstepped my way east and occasionally north, keeping up with the clouds to Fayette. This is the same cloud a couple hours after the picture above, near Fayette: 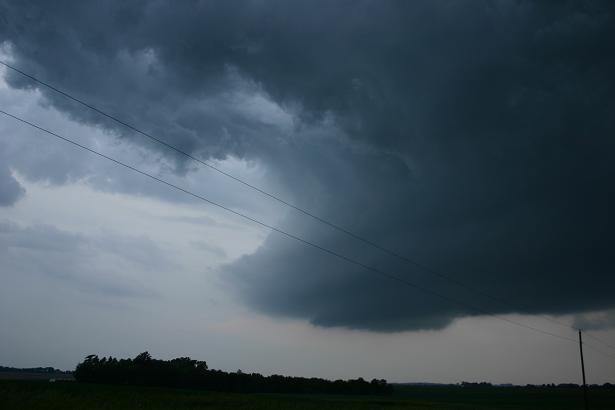 At this point, it was just beginning to put down a few sprinkles - but the structure suggests the updraft was surely rotating. But the top just kept getting sheared off - but it was getting higher. In the meantime, a cell had popped up near New Hampton. I started for it at first, but figured I could not make it, so turned my attention back to the cloud I had been following, which looked like it was ready to go. But as I followed it northeast, I started to see lightning from the New Hampton cell as I entered West Union, and realized that it was moving fast enough I could catch it, and it was now my best hope for seeing any severe weather before dark. But only barely before dark, as it turns out. I watched it a while north of West Union (north of the Turkey River crossing on route 150), and finally about midway between West Union and Decorah and a little after sunset around 9 p.m., it produced a series of interesting lowerings to my north-northeast as I watched from route 150 near the Fayette-Winneshiek County line: 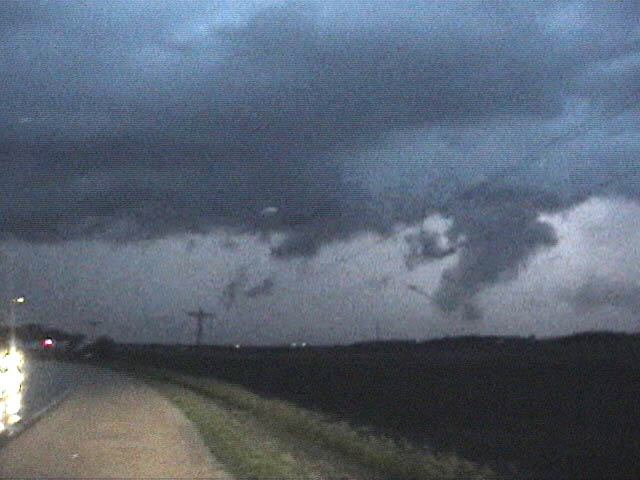 The lowering at the right of the picture started as scud, but quickly became attached to the base. And note that above and surrounding the lowering is a curved cloud structure, sort of a collar cloud. This suggests to me that this feature was associated with some fairly strong rotation, though it was impossible to tell in the dark. Also, what appears to be one lowering here may actually be two, with one in front of the other. I think that because of this video capture, taken when a very bright lightning bolt struck to the left of the lowering(s): 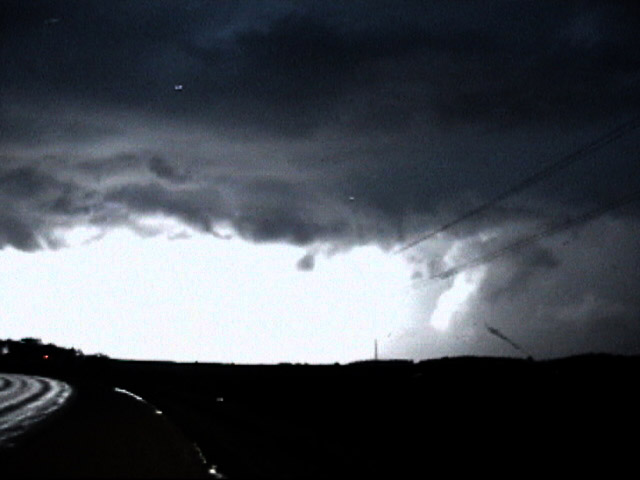 The left part of the video capture is blown out by the brightness of the lightning (a split-second earlier frame, when the bolt was less bright, can be seen here), but note the narrow white area to the right of the big one - this is a lowering that was front-lit by the lightning, clearly corresponding to the left side of the lowering in first of the two video captures above. But to its right, and right under the collar cloud feature, there appears to be another lowering (crossing the lower of the two wires), dark, that is back-lit. Owing to its location right under the collar cloud and its shape, I am wondering if this could have been a funnel cloud. No way to tell for sure from only this video capture, but given what was going on with the storm at the time, it certainly could have been. Here is a diagrammed version of the picture explaining my thinking of what may have been going on.

Just then my camcorder tape filled, and I had to stop to put in a new one - so my eyes were off the storm for a couple minutes. When I got the tape replaced, I started recording again and soon a flash of lightning illuminated this: 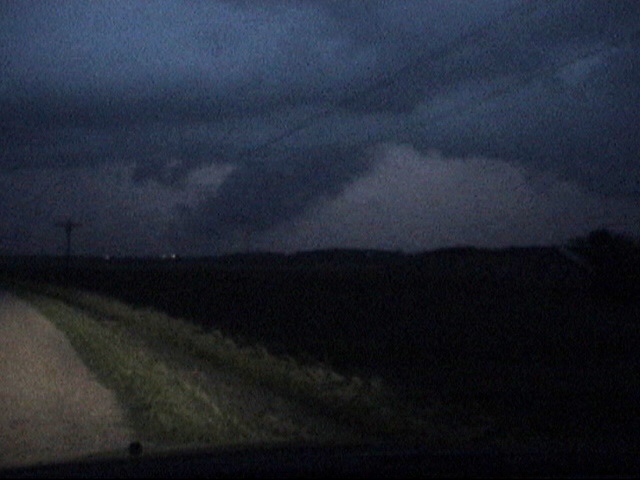 I thought this was the same lowering as the one in the first two pictures above, but now that I have looked at the tape that ran out (I hadn't when I posted the initial report on Stormtrack), it is obvious that this is a different lowering, west of the first one, which by now had either dissipated or moved off to the east. Like the first one, this lowering probably formed by rising scud consolidating into the cloud base; perhaps the scud to the left of the lowerings in the first two captures above. By the time I got this capture a little later, you can see a light area in the center of the lowering, suggesting that at least part of this lowering may have been reverting back to scud - though the left part still looks pretty solid. Hard to tell exactly what was going on here, but the development of this new lowering to the west of the first one suggests the storm was undergoing some changes at this time. Indeed, as discussed below, the storm was splitting around the time I got this video.

All of the pictures of the lowerings are video captures from when the storm was illuminated by lightning flashes, which was getting to be the only way you could see anything. In any case, these lowerings coincided with two events. One, the storm, which had been moving northeast, split around this time, with the right split moving ESE and becoming the supercell that resulted in multiple tornado warnings from Prairie du Chien, WI eastward. Two, around the time of the split, the first report of severe hail (1-inch) occurred in in Calmar, to my north and just west (left) of the lowerings. After this, the right split became quite a sustained right-moving supercell, producing a few more severe hail reports and one wind damage report in Iowa before crossing into Wisconsin, where it produced up to golfball hail and widespread flash flooding in Grant County, WI, and eventually, per NWS-Milwuakee damage survey, a brief tornado in Iowa County, WI. That county also had reports of up to 2-inch hail, wind damage, and flash flooding from this storm.

Taking all of the above into consideration, I do think the formation of the lowerings I saw was related to the storm's splitting and becoming a severe right-moving supercell. The storm may even have given me a funnel cloud, and it certainly produced a good deal of severe weather, mostly after I let it go in the darkness. Now this is not a lot, given the day's potential and the fact that the best of what I saw was after dark. Still, it's better than nothing on a day that could have been so much more. After letting the storm moved east a little after I got the video captures above, I pushed north as far as Calmar, but knew that was the end of the chase - it was dark, the storm was getting ahead of me, and moving into hilly, wooded country to boot - so I headed back to West Union, got a room at the Super 8, and watched the lightning show out of my east-facing window.

Radar image as the storm was over Calmar, just before the split