Today's setup involved a stalled cold front extending from northeast to southwest across the Texas panhandle, from the northeast part of the Panhandle southwestward to near where I-40 crosses into New Mexico. With the stalled front, diffuse low pressure in New Mexico, a very unstable airmass, and southeasterly wind south of the front and north and east of Amarillo, the setup would be very favorable for supercells. There were two limiting factors: the upper winds, although divergent, were fairly weak, as the main jet stream was farther northwest, meaning that the supercells would tend toward the HP (high-precipitation) type, and the best directional shear was up a little bit above the surface rather than right near it, which would limit the chances for tornadoes somewhat. Still, supercells, possibly quite intense, were almost a sure bet, and tornadoes a possibility. I headed out from Santa Fe around 11 a.m. (turns out I should have left an hour or so earlier) with a target in the area bounded by Tucumcari, NM, Amarillo, TX, and Stratford, TX. This proved to be a good target, as supercells initiated west of Dumas and moved into the area just east of there. I ended up intercepting three supercells.

This was the storm that produced a brief tornado and monster hail just south of Sunray, TX. Due to starting later than I should have and killing too much time at a gas and food stop in Tucumcari, I was still 50 miles or so to the southwest when these occurred, but I eventually (around 4:25 p.m.) did intercept the cell near Stinnett, TX, and after working my way north to a spot on route 207 just NNE of where it splits from route 136 north of Stinnett, I saw around a half-dozen gustnadoes along the leading edge of the outflow, which was now a couple miles ahead of the precipitation. Here is a picture of one of the gustnadoes (a mile or so away; look between the two hay bales): 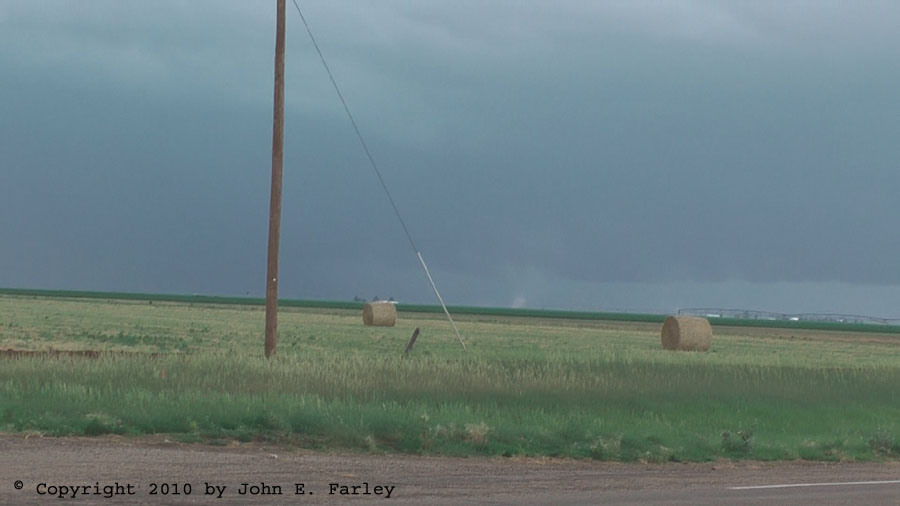 A more zoomed version of that picture and pictures of two of the others can be seen here. I tried to get video of these, but they were very brief (most of them lasted a minute or less) and a mile or two away, so in my rush to zoom in on them I failed to keep them in focus and/or they ended before I could get decent video. But I did manage to salvage a few decent stills. The gustnadoes occurred between 5:05 and 5:15 p.m., and at one point there were three of them at the same time.

I stayed in this general area for quite a while, just drifting north, as the storm did not seem to move a great deal and what movement there was was mostly to the north. By the time I had caught up to it, the storm was very HP, and it stayed that way throughout the time I was on it, producing lowerings like this: 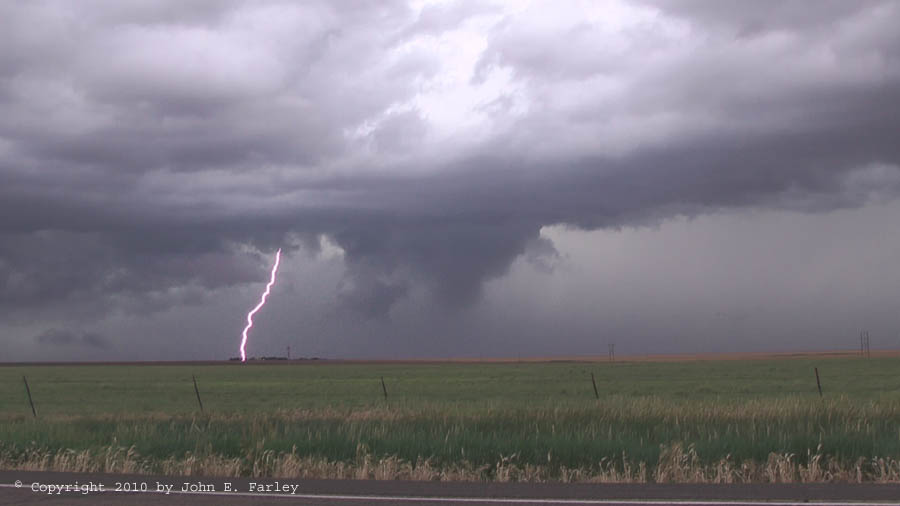 The storm did cycle a few times, though, forming new wall clouds, often starting as scud under the updraft which rose, grew, and quickly merged with the cloud base above. The third time this happened, the wet RFD that formed south of the new wall cloud surged quickly to the east, forcing me some distance eastward on route 281, to a location well ESE of Spearman. The storm remained SVR-warned and, in addition to the gustnadoes, produced a couple reports of 1-inch hail and one wind report during the time I was on it. But it never regained the intensity it had earlier exhibited, at the time of the brief tornado and giant hail that I missed. Eventually, as the storm seemed to be getting more linear and outflowish, I let it go.

After I left the first storm and turned back toward the west and south, I heard the tornado warning that was issued at 6:45, for a new storm west of Dumas. Since I was driving toward the storm from the northeast rather than from behind it this time, I was able to more quickly close the gap between me and the storm than in the case of the previous storm, and I was on the storm by about 7:30, about the end of the 10-minute period in which it pounded Dumas with large, wind-driven hail. There were multiple reports of golfball hail in Dumas and measured wind as high as 66 mph. Almost as soon as I heard the warning, I could see a large, wide lowered area to my southwest. As I got closer, it appeared to be something of a wall cloud/shelf cloud hybrid, with a long inflow tail on the northern side. The following picture (a panoramic merge of two video captures) was taken about 7:34:

This picture was taken along route 152 between Stinnett and Dumas, looking west toward Dumas. Although you don't see other chasers in this picture, the crowds were just toward the storm from here, and soon I was in the crowds as I nudged west and the storm approached. There appeared to be potential areas of rotation near the northern end of the feature pictured above and also near the left end of the precipitation area under the center of the broad lowered area, which is also about where radar was showing rotation. I am not sure whether this feature was a small funnel or a scud finger, but it was somewhat persistent: the picture linked here was taken about 2 and a half minutes after the panorama one above, and the feature is present in both pictures. Also around this time, you could see evidence, as in this picture, of the intense precipitation, accompanied by violent wind, to the west toward Dumas. At the northern end of the lowered area, where the inflow tail came in, you could readily see the upward surge into the base of the storm. Finally, of note during this time period was the very strong inflow. When I first approached the storm, there was a strong, cool wind from the NE that seemed to be some combination of outflow from the early supercell now well to the northeast and inflow to the new one. As I got closer to the storm, the wind veered to due east and was quite strong, but still cool. I imagine that farther south, the storm was drawing warmer inflow, but I am guessing that the ingestion of this storm-cooled air might be one reason this storm did not produce a tornado.

As I closed on the storm and it moved closer to me, it was clear that there was a broad area of rotation in the cloud base to my southwest. I have video showing rotation from about 7:39-7:52. For the most part this was rather broad-scale cloud-base rotation, though it did occasionally tighten up a bit. Here is part of that video:

You can also see in the video that there were a lot of chasers who converged on this storm, and the traffic got a bit heavy for a while. Although I am sure it did not rival a couple days in Oklahoma this year, this was by far the most chasers I have seen on any day this season and probably as many as I have ever seen. Certainly a lot for a day that did not even have a FCST thread on ST until after noon on the day of, LOL!

As you can see in the video, the precipitation really fills in just to the west and south of the area of rotation, and this was part of a process whereby this supercell, like the early one, transitioned to HP (high-precipitation) mode. By the time I and the rest of the case caravan were pushed east by the storm into Stinnett, this process was complete. In this picture, you can see that the supercell had made the transition to HP. Also of interest in this picture is what I thought was dust rising between the two white buildings near the center of the photo - I thought this most likely was a dust plume kicked up by the strong inflow, or possibly a gustnado. Turns out it was neither. Steve Miller reports that it was smoke from a fire. For me, this was pretty much the end of the show for this storm. A number of chasers did head north/NNE on route 207 to try to stay ahead of the storm, but figuring this was a sure way to get cored, I did not.

After breaking off from the second supercell, I thought my chase day might be over, and headed south to Borger to get something to eat. But after a quick bite at McDonalds, I noticed that a new tower had gone up just to the NW of Borger and this was now beginning to look like a very good storm. So, once again, I headed north from Borger, and found a decent viewing spot just north of where the road crosses the Canadian River, perhaps about 5 miles south of Stinnett. I noticed a slightly lowered area off to my west under the tail-end updraft, but there appeared to be a more pronounced wall cloud forming to my northwest, somewhere west or northwest of Stinnett. But it was getting dark now, and were it not for the lightning, before long I would not have been able to see very much. By the time it was dark, around 9:15, the new storm had a SVR warning, and the lightning was at times illuminating the wall cloud quite well. The wall cloud now appeared to be just slightly west and a little north of Stinnett. I videotaped for a couple minutes, then switched to the tripod and captured stills with my SLR camera. I managed to get several good photos of the CG lightning, which became spectacular and nearly continuous, and stayed that way for an extended time.

Around 9:30, the structure in the storm became better-developed, with a ground-hugging wall cloud and inflow tail just the other side of Stinnett. Occasionally the lightning backlit and/or illuminated these features quite nicely as in this picture, perhaps my favorite for this entire chase: 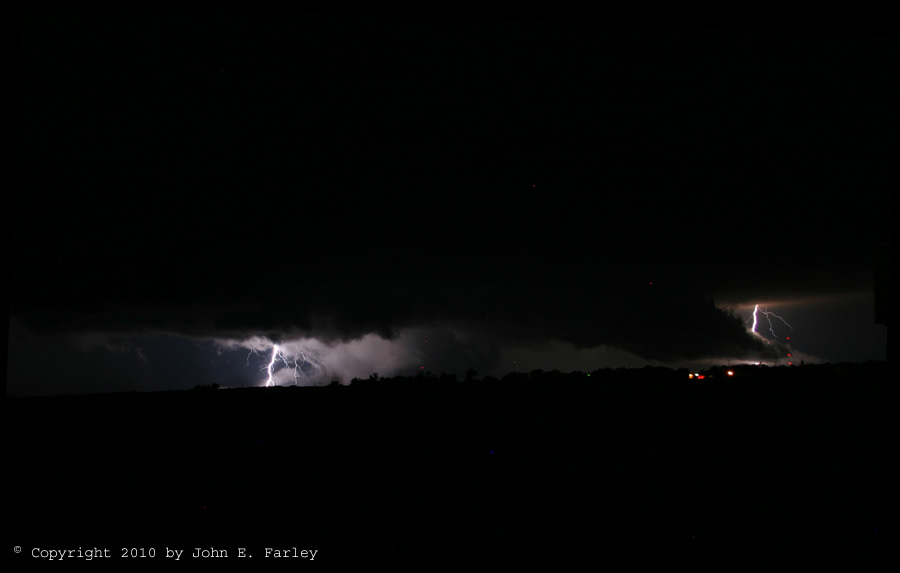 I began to wonder if there could have been a tornado in there, but none were reported in that area, and I saw no power flashes. There were some flashes of lightning when the wall cloud looked rather disorganized and scuddy and disorganized and others where it looked pretty good - it is really difficult to tell at night. But since there were no reports of any tornadoes, I assume there were none. The storm did verify as severe, however, producing quarter-sized hail in Morse. Another feature of these storms was extremely heavy rain, in part because all three of these supercells as well as some other intense storms moved over the same area, roughly around Sunray, Morse, and Grover, with doppler radar indicating storm totals of 11 inches or more throughout this area. Perhaps a little exaggerated due to the effects of hail, but there still was a tremendous amount of rain, and quite a bit of flash flooding, across this area. Around 9:40, I called it a chase day, and headed to Amarillo to get a room for the night.