Today's severe weather setup centered around a back-door cold front entering New Mexico from the northeast. Along and just behind the front, easterly winds (which, depending on the model, might tend more to southeasterly - better for severe weather - or northeasterly, not so good) and upslope flow would combine with the forcing from the front and moderate instability (CAPE around 2000) to create a potential for supercells. In general, the models were more bullish on northern New Mexico, around the Springer area, than farther southeast along the front, but there was quite a bit of disagreement. The Storm Prediction Center had a slight risk for New Mexico generally east of the central mountains and north of I-40, and for Colorado east of the mountains.

I initially targeted Springer, NM, because of the areas with good instability and shear, the models were more bullish on precipitation in this area than farther southeast along the front toward I-40. I headed out around 1:00 p.m. By the time I was approaching Las Vegas, NM, I could see numerous storms forming well off to the east. I stopped and checked data, figuring the storms would build northwestward along the front, which was stretched from east of Springer southeastward to somewhere near Tucumcari. However, by the time I got to Wagon Mound, it was evident that all the developing storms were to my east, with clear sky to my north. So, I made the decision to head east to Roy, where I could either continue southeast toward the storms or return back north with good road access north and west to my original target in Springer. Also influencing my decision was a towering cumulus (TCU) that had formed not too far to my southeast, which gradually developed into a decent-looking thunderstorm. In the TCU stage, it even had an interesting slightly lowered area under the base. Beyond this farther to the east and southeast, there were other stronger storms, but the reports I was hearing suggested they were in the Texas panhandle. Hard to tell exactly, since I lost data a few miles east of Wagon Mound and would not have it again until I neared I-40 much later.

When I got to Roy, I faced a critical decision - return north to my original target near Springer, where I could see only a little mushy, very high-based and low-topped convection over the mountains (this looked more like the appearance of winter snow flurries than anything approaching thunderstorms) or go after the actual storms to my southeast. The nearer storm still looked pretty good, and the one farther away produced 1.9" hail northeast of San Jon, though I did not know it at the time. After some hesitancy and confusion, I made the decision to go southeast, which turned out to be a good one because severe storms did not occur in my original target area until after sunset.

As I continued southeast toward Mosquero, the nearest storm, now located just to the north of Tucumcari, weakened. At first, so did the storms farther east, but then they regenerated quite dramatically, slightly to the south and a little west of where they had been earlier. So I continued on through Mosquero toward Logan, gradually shifting the storm I was trying to catch up with from the weakening one north of Tucumcari to the obviously very strong one southeast of there. As I headed south from Logan to Roy, I noticed several lowered areas between the main core of precipitation to my SSE and a new core that was forming about due south of my location. By the time I stopped, the lowerings had disappeared, but the rest of the storm's structure was about the same. (The earlier lowerings had been in the area just to the left of the road between the two areas of precipitation.) In the picture linked above, there might still be a small wall cloud at the left edge of the precipitation straight down the road; hard to tell since it is partly hidden by the rain, and this feature was a good 20-30 miles to my south; perhaps more. This storm produced a number of high wind and wind damage reports from 5:40 to 6:15 in the areas of Canon Air Force Base, Clovis, and Texico. The picture above was taken around 5:45 or 5:50. At this time there were also impressive mammatus associated with this storm, nearly overhead:

After I took these pictures, I continued south through San Jon and up the escarpment you can see in the picture linked above (i.e. the picture before the mammatus one), ending up 17.5 miles south of San Jon, where route 489 jogs east. From this relatively high spot, I had a good view of the storm around 6:15, as it produced the strongest recorded gust, 78 mph, at the KCVN AWOS site just northwest of Texico and just east of Clovis. Here is a view of the storm at that time: 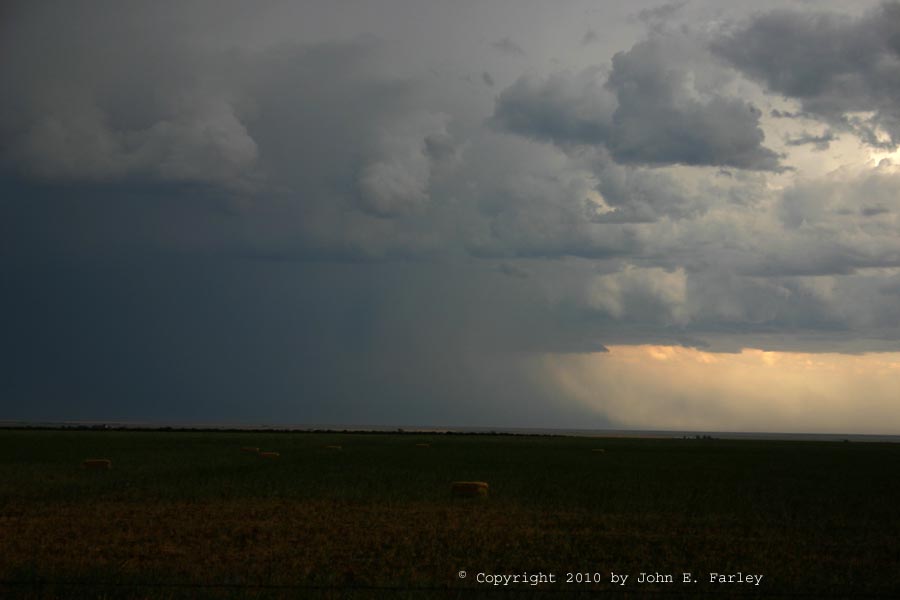 The storm was still a good distance away, probably 40 miles from my location at its leading edge and 20 miles at its trailing edge. But it was high based enough that I could see its structure well considering how far away it was and that I was looking at it from behind rather than ahead. It also had quite a bit of lightning: 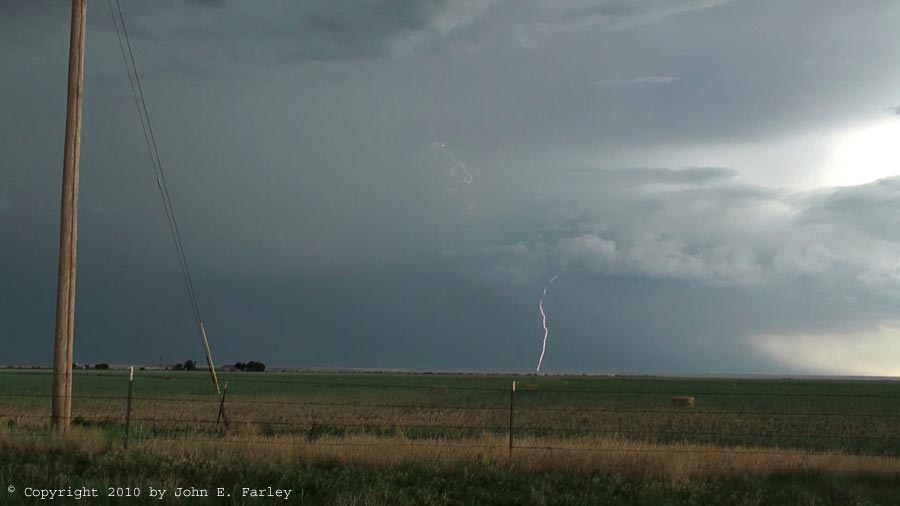 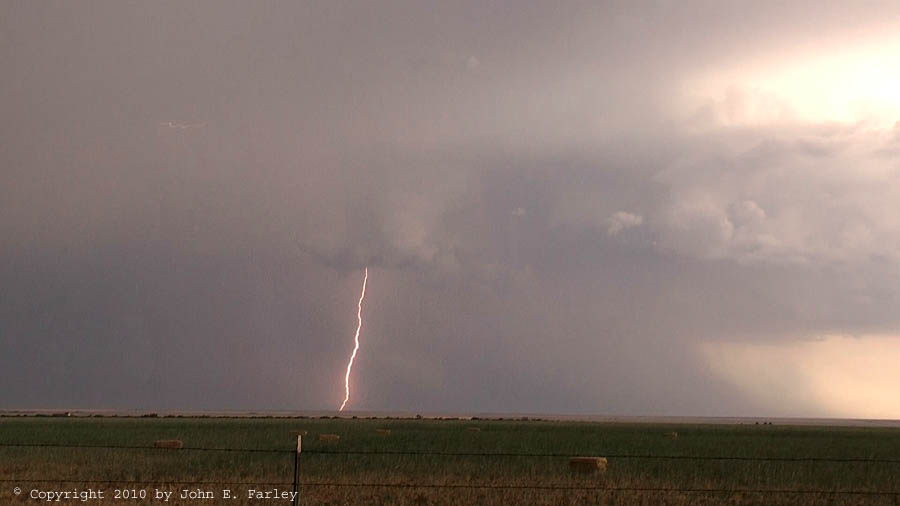 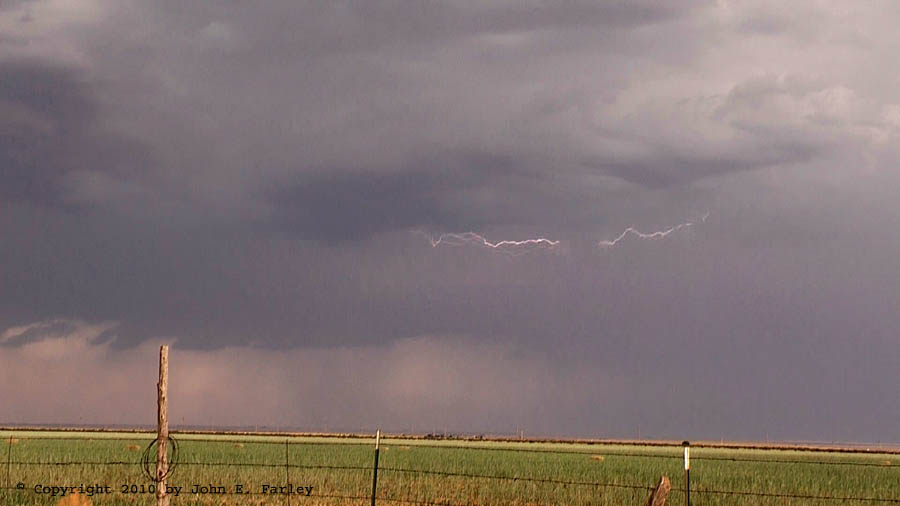 Since the storm was still well ahead of me and moving away, and pursuing it further would have given me a longer return drive, I decided to let it go around 6:45. But when I got back to the escarpment, where a large wind farm is located, I did stop to get a few pictures of the wind turbines with the storm in the background. I couldn't get the optimal angle to get the best part of the storm in the background, but was fairly happy with this one: 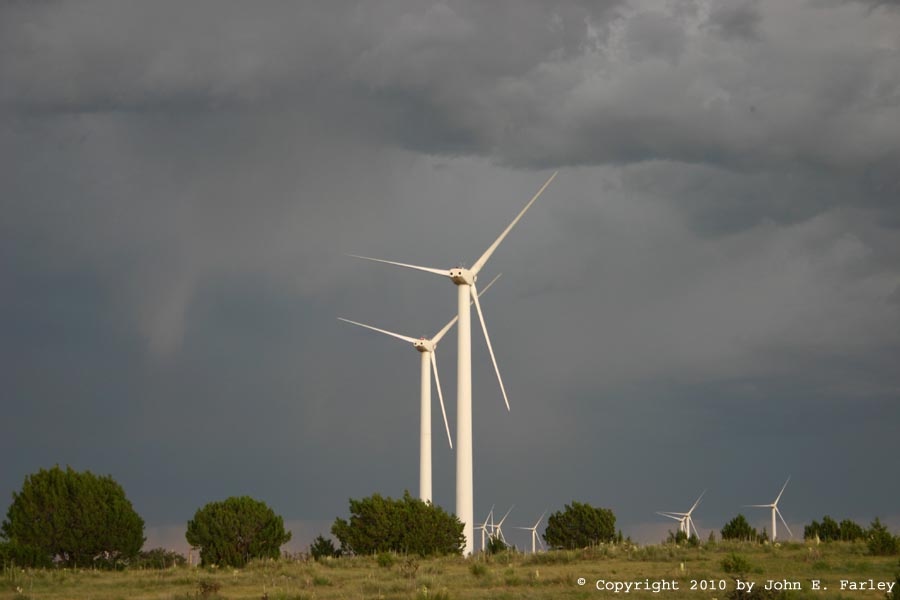 This was a somewhat frustrating chase, because nothing fired in my target area until nearly dark, forcing me to play catch up with the storms well to the southeast. I would never have guessed when I started out that I would end up south of I-40; had I known that, I could have saved a lot of driving and time, and had a better view of the storm. Still, I was glad to have been able to get a decent view of what turned out to be the most intense of the storms that went up along the cold front in the Texas panhandle and New Mexico.