I left Pagosa Springs for my first true storm chase of the 2015 season around 9:15 a.m., debating between eastern/northeastern CO and northeastern NM as targets. (The start of my chase season was late this year, due to two long trips in April and May. Not my preferred timing, but one trip was for a wedding and the timing of the other was dictated by when we could use our frequent-flyer miles to the U.K.) On this day, SPC was more interested in eastern CO, but to me it looked like northeastern NM might be the better target. The models were predicting much greater instability, perhaps 2000 or higher CAPE in NM, whereas it was not predicted to be nearly that high in CO. A back-door cold front would be moving into CO from the NE, and those often can trigger some good storms, but usually the best chance for supercells is a day or two after those move in and stall out, so that they kind of act like a warm front or stationary front combined with upslope flow. But often the first day is not as good, and neither the limited instability nor the sparse precipition forecast by the models in eastern CO gave me much hope for that area, compared to NM where instability looked to be better and models did forecast robust convection.

As I crossed Wolf Creek Pass, I was alert for the chance of thundersnow, since there were numerous showers and a few thunderstorms in the general area, and forecasts had been for the snow level to be as low as 11,000 feet at times. I stopped and observed for a while at the summit (where a good foot of snow was still on the ground in most areas). Temperature was 42, and intermittent light rain was falling with no snow or graupel. After 10 or 15 minutes I had heard no thunder, so considering that the p-type was rain and no thunder was occurring, I pushed on. Did stop briefly down the road to take a couple pictures of the Wolf Creek Ski area, where the upper part of the ski area still looked quite skiable: 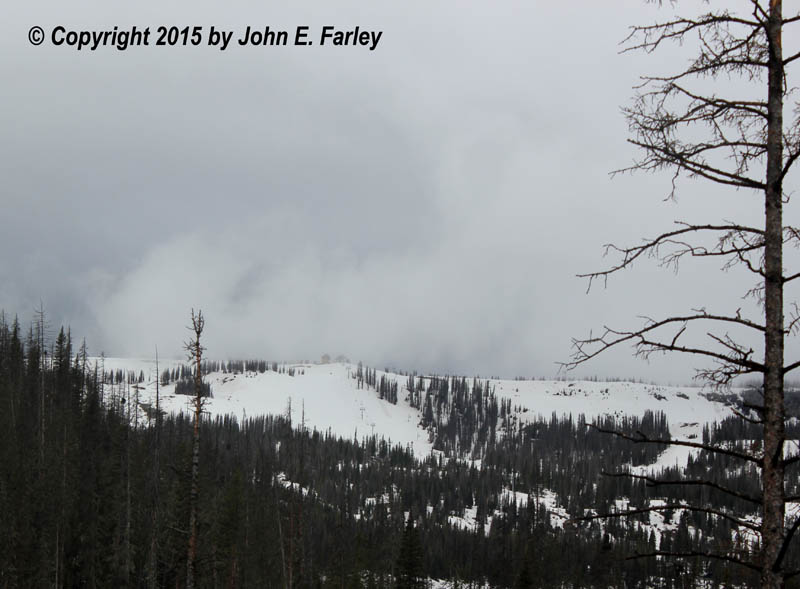 I reached Walsenburg around 12:35 and grabbed lunch at Hardees and made a data check. I noted that a relatively high CAPE of 2000-3000 was developing over northeastern NM, as expected. There were two intense thunderstorm cells, one of them just southwest and the other ESE of Raton, NM. SPC now had a mesoscale convective discussion out for NM; it indicated that some severe weather was possible there, but that a watch was not expected. (One was issued an hour or so later, however, for northeastern NM, much of the Panhandles, and a little bit of far wouthwestern KS.) Based on the parameters and the presence of two decent-looking storms near Raton, I decided to target NM and attempt to get between the storms. Initially I thought I might be able to do that by heading east from Raton, but the movement of the storms, though not real fast, would be just enough to make that strategy impossible. As I crossed the stateline into NM on I-25 just north of Raton, I noticed quite an uptick in CG lightning in the precipitation area ahead of me. The precipitation area was about all I could see of the storm, though, as the updraft was on the south or southwest side and I was approaching the storm from the north. Around this time, about 1:45, the storm dropped 1.25-inch hail on I-25 between Raton and Springer, in what turned out to be the only severe report of the day in NM. (There were only a handful in Colorado as well, and all of them were either from leading storm of the two I was watching after it later crossed into Colorado, or from a storm in the far northeast corner of the state that I could not have rached.) Anyway, after a brief turn east at Raton, I knew I had no chance to catch the storms that way, so instead I continued south down I-25, with the revised plan of heading to the east from Springer along route 64.

As I came through the area where the hail had occurred (which I did not know at the time), I noticed a fair number of stopped vehicles, but no hail on ground. The storm that produced this hail was the trailing one of the two cells I had been observing - but it was now east of me, lining out, and moving away from me. The earlier (leading) cell that had been ESE of Raton by now had tracked into SE Las Animas County and eventually Baca County in CO. It got 2 SVR warnings after it crossed into CO and did in fact produce some 1-inch hail in Baca County. The trailing cell and others along the line quickly lined out after about 2:30, and despite adjusting my chase strategy to going east from Springer, I still ended up behind the storms. I may have been a brief funnel between 2 cells in the line at 2:40 p.m. well east of Springer, but it disappeared in the rain after a minute and I did not get a picture. There was a radar meso about where I saw the possible funnel, so I suppose it could have been. Farther east along the line there possibly may have been another around 3:25, but I think more likely this one was just some kind of scuddy lowering. Here is a picture: 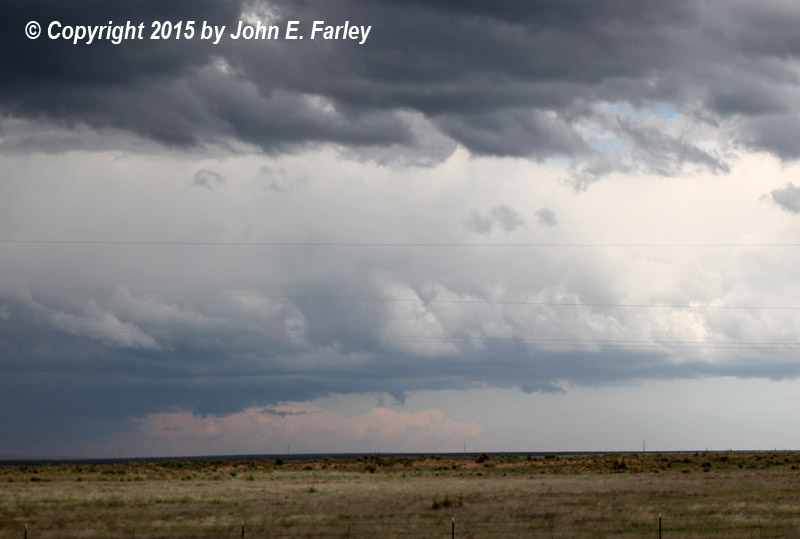 Too far away to tell with any certainty. This part of the line surged to the ENE into the Oklahoma Panhandle, were it did produce severe hail.

I turned south off route 64 toward Roy, NM, and eventually caught up with the line around there. However, the stronger storms had moved well to the ENE, with only weaker storms (but with strong, cold outflow) in the western part of the line around and west of Roy. More importantly, though, new convection started to go up on the outflow from the first line, S. of Roy around 3:45. At this time I was just south of Roy, behind the line where the new convection was starting to occur. Here are pictures of the tower assocated with this new convection before any precipitation was visible, and of the first rain shafts from this new convection, blown back from the northeast to the southwest by the same outflow wind that was forcing the storms up above the precipitation: 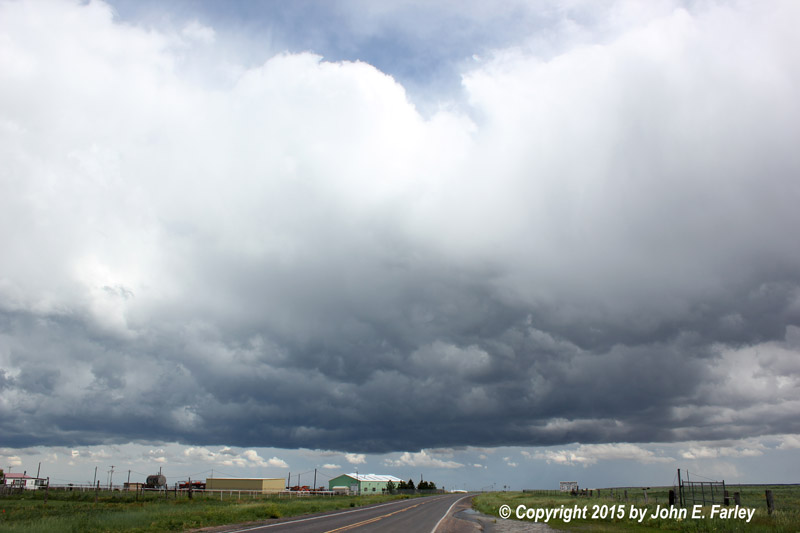 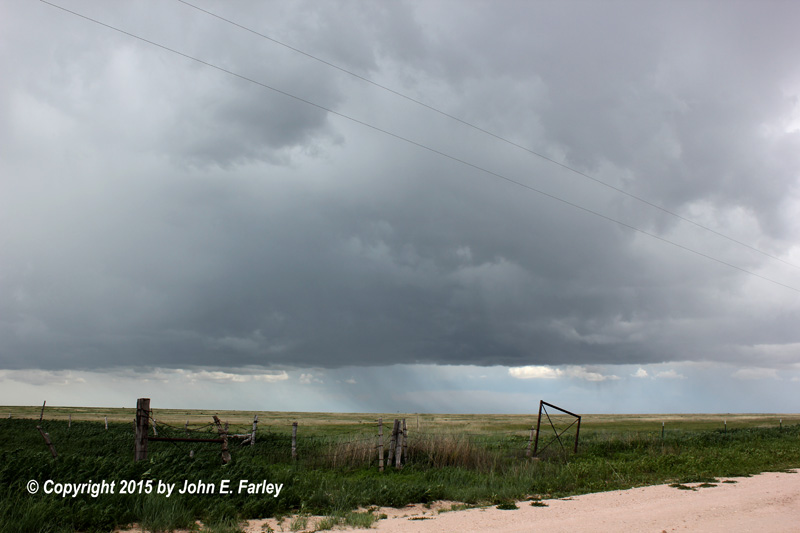 This cell before long grew into another line which I chased from 3:45-6:00. As I reached the escarpment just southeast of Mosquero, I had a nice view of the storm and the wide valley below:

I chased this storm east on NM routes 102 and 420, almost to the Texas state line, to where 420 T-intersects with NM 402. As soon as I was east of Mosquero I encountered strong outflow winds I would estimate around 40-45 mph, and what soon became torrential rain. I really thought the heavy rain was in a limited area and that the surging storm motion would take it southeast of me fairly quickly. But that was not the case. Instead, I was in torrential, often wind-driven rain the entire way along routes 102 and 420, a distance of 40 miles or so. Route 420 is not an easy road, narrow and bumpy in places and, on this day at least, there was a large herd of cattle on the road. Not real unusual in New Mexico, but not what you want to see when battling nasty driving conditions. Eventually, with the rain and the amount of CG lighting both increasing and darkening skies just to my SE, I reached the north-south route 402. I decided to see if I could get data, and lo and behold I could for the first time in many miles. The tail-end of the line, now just to my south, had became somewhat supercellular in character, so I decided to turn south toward Nara Visa for one final intercept attempt. Just north of Nara Visa around 5:30, I finally got something photo-worthy, as some decent storm structure and a nice double rainbow came into view: 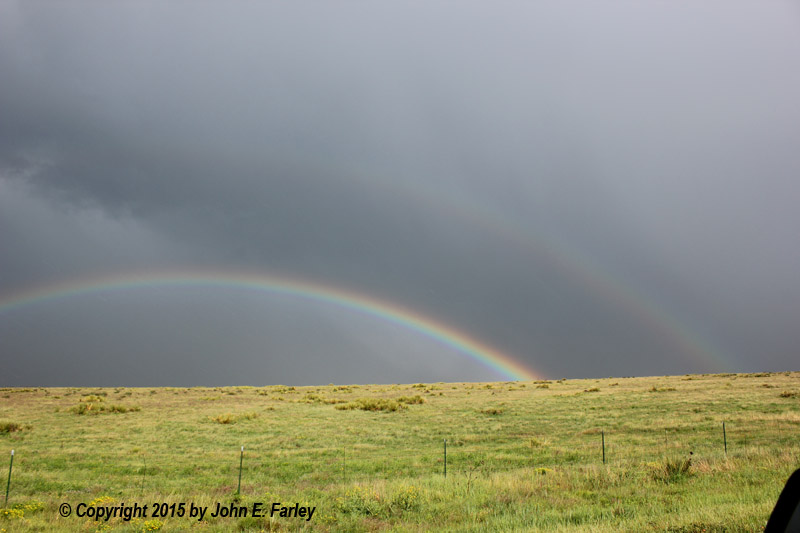 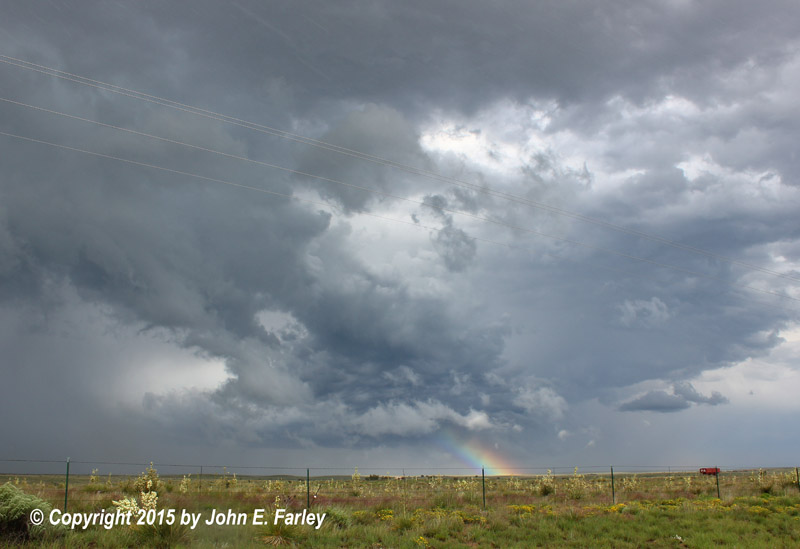 This line of storms produced numerous severe wind gusts farther east in TX panhandle, including a couple of hurricane force. Interestingly, the precipitation in the SVR-warned part of the line, where the high winds occurred, did not appear as heavy on radar as in the part of the line that I was in. But the wind, apparently, was quite a bit stronger.

Along the route where I had travelled, from Mosquero througn Rosebud to just south of Amistand, then S to just N of Nara Visa, radar indicated substantial amounts of total rainfall by eastern NM standards. According to radar estimates, the storm produced 1/2 to 1+ inch of rain from Mosquero to Amistad, which I can believe since I drove in torrential rain most of that way. And then 1-1.5+" just northeast of Nara Visa, between there and Romero, TX as the tail end took on supercell character. This was the area I was looking toward when I got the rainbow and storm structure pictures above.

All in all this was a rather difficult, frustrating chase, but at least I got some eye candy at the end.

Chase distance for the day: 458 miles.