With upslope flow and westerly upper winds associated with a shortwave in the persistent jet stream to the north, storms appeared likely on the eastern plains of Colorado, and with the directional shear, supercells appeared likely. Somewhat limited moisture return behind a back-door cold front the prevoius day would be enough for storms, but the limited moisture meant somewhat limited instability, with the best in far southeast Colorado where CAPE was forecast to rise to somewhere in the 1500 j/kg range. A limiting factor for tornadoes would be that both the instability and the directional shear would be up a ways in the atmosphere, not right near the surface. But supercells were likely with a good chance of them going severe at least as they got farther southeast into, say, the Lamar area, and chasing these storms today would leave me in a good position for the somewhat better setup the next day. And this was the only time this year that there had been two back-to-back chase days reasonably close at a time when I could actually go.

The Chase, hour by hour

1:00 - coming over La Veta Pass on U.S. 160. Once I am over the pass, a large storm is visible to my north, near Colorado Springs. This storm got its first SVR warning around 1:30 as it was over Fort Carson on the south side of the Colorado Springs metro area. At this time the storm was moving east, but I thought it might eventually turn to the SE, as did turn out to be the case.

2:00 - Heading NE toward La Junta from Walsenburg on CO route 10, I am monitoring the Colorado Springs storm and note another small one starting to go up just to my north. I know that as this storm matures it could also go severe, but I figured that 1) the Colorado Springs storm looked much more impressive and 2) the new storm, if it turned at all SE, would move into an area south of La Junta with almost no east-west roads to keep up with it. Hence, I headed north toward Fowler on CO route 167, passing east of the new storm. Once I was past it, I stopped briefly and noted that it had quite a bit of thunder for something that at the time looked like a very minor storm. Here is a picture I took as I was about to turn north and cross ahead of this new, small storm: 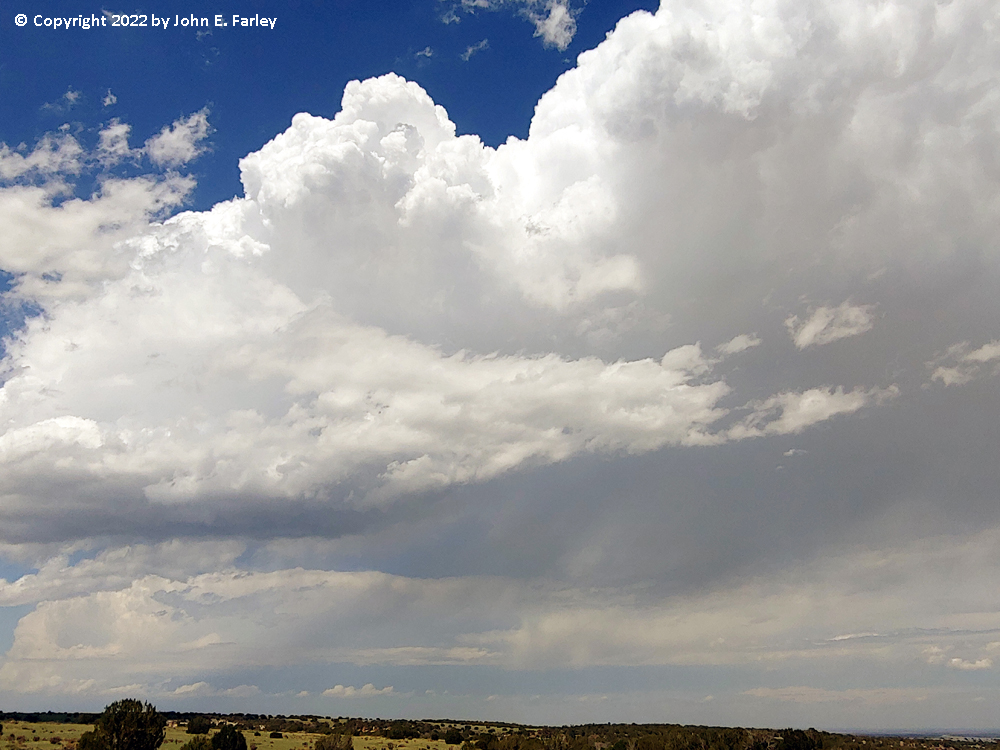 2:30 - 3:30 - I get progressively closer to the Colorado Springs storm. As expected, it begins to turn a little to the SE. Since it is still well to the west of due north of me, I jog WNW when I get to U.S. 50 in Fowler, planning to go a little northeast than north from Boone on Boone Road. The storm is now clearly supercellular, continues to get SVR warnings, and looks impressive, although the meso is mostly hidden by wrapping rain and hail. This wrapping precipitation is illuminated by the sun, providing a sharp contrast with the unlit precipitation in its background. Once the storm is to my northeast, I double back to Boone to head east on CO route 96 and re-intercept the storm around Ordway.

Here are a couple pictures from the early stages of the storm, showing its structure and the wrapping sunlit precipitation: 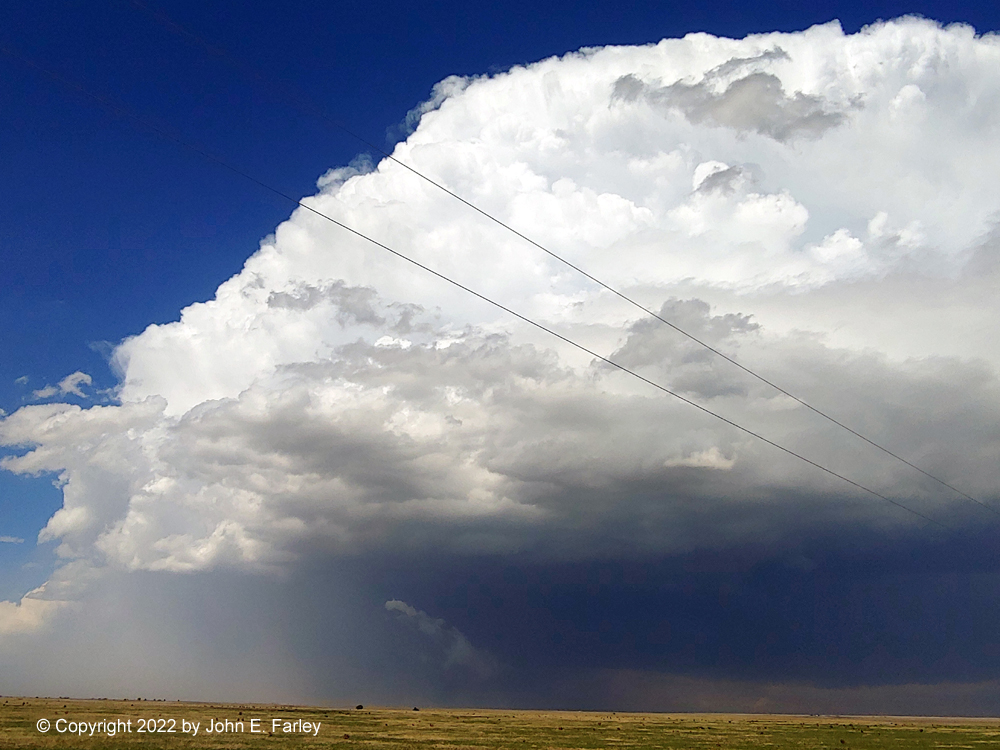 3:30-4:30 - I have the storm in my view the whole time as I head ESE, then ENE, along route 96 from Boone to Ordway. At times I can see the meso, its back side brightly lit by the sun shining into the storm's rear flank downdraft (RFD) slot: 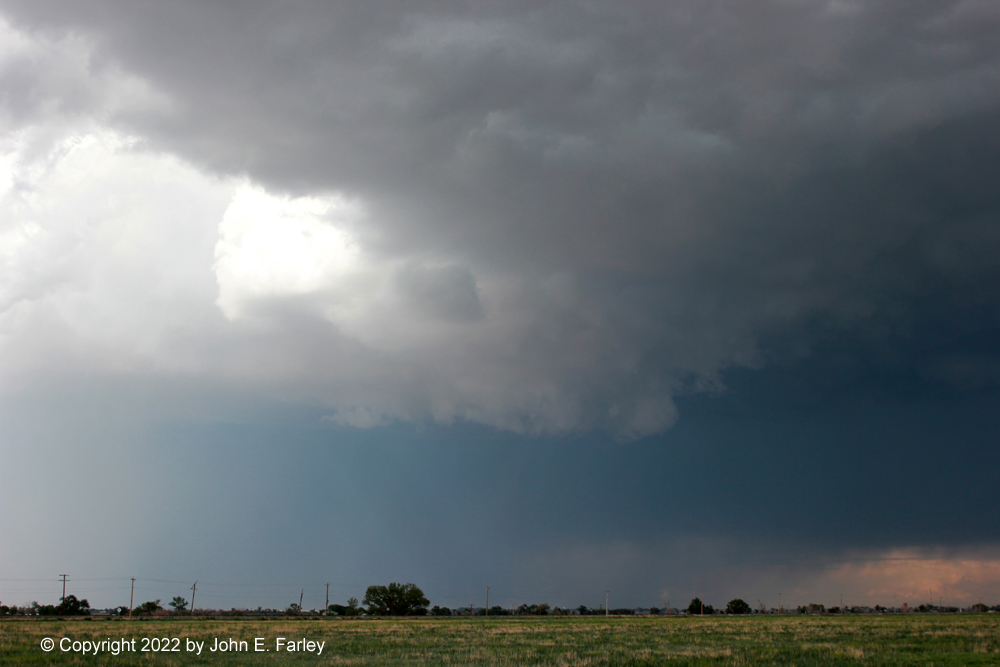 At other times, new rain and hail shafts form and wrap around the meso, often brightly illuminated by the sun. And now there is also an increasing amount of blowing dust evident, from the storm's RFD. Here is a picture: 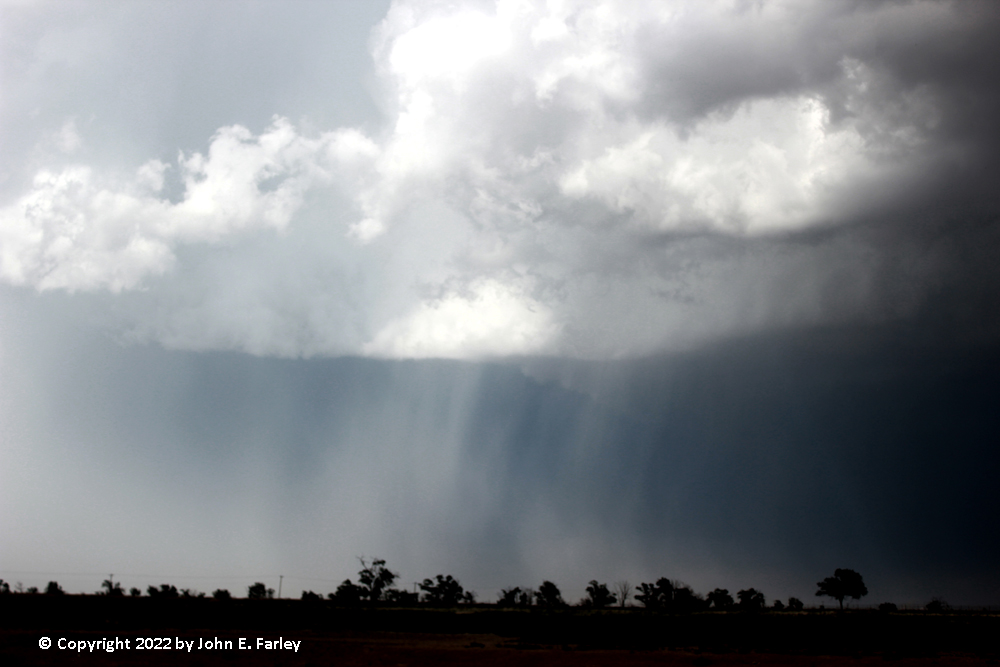 Meanwhile, the storm I had passed up earler is now really going to town, getting its third SVR warning as it is about to slam Lamar, well to my SE, with high wind and large hail. While my storm was moving to the ESE, the other storm farther SE was moving just north of due east, taking it eventually right into Lamar, where it produced an 82 mph gust at the airport and golfball hail at multiple locations in and near town. Here is a picture of that storm from my now-distant location, around or just before the time of the severe wind and hail reports in the Lamar area:

4:30-5:15 - As I arrive in Ordway, the emergency alert on my phone blares for a SVR warning with a DESTRUCTIVE tag for baseball hail and 60 mph wind, heading for Sugar City, which is 5 miles ENE of Ordway. The hail misses Ordway, but the wind doesn't, as RFD wind blasts the town and lofts dust - with sunshine and thunder. After the storm crosses 96 I head east through Sugar City to see if there are indeed baseball hailstones. Around 5 miles east of Sugar City there was lots of hail on the ground including quite a bit around quarter size and at least one that was 1.75" across at its widest point, considered golfball: 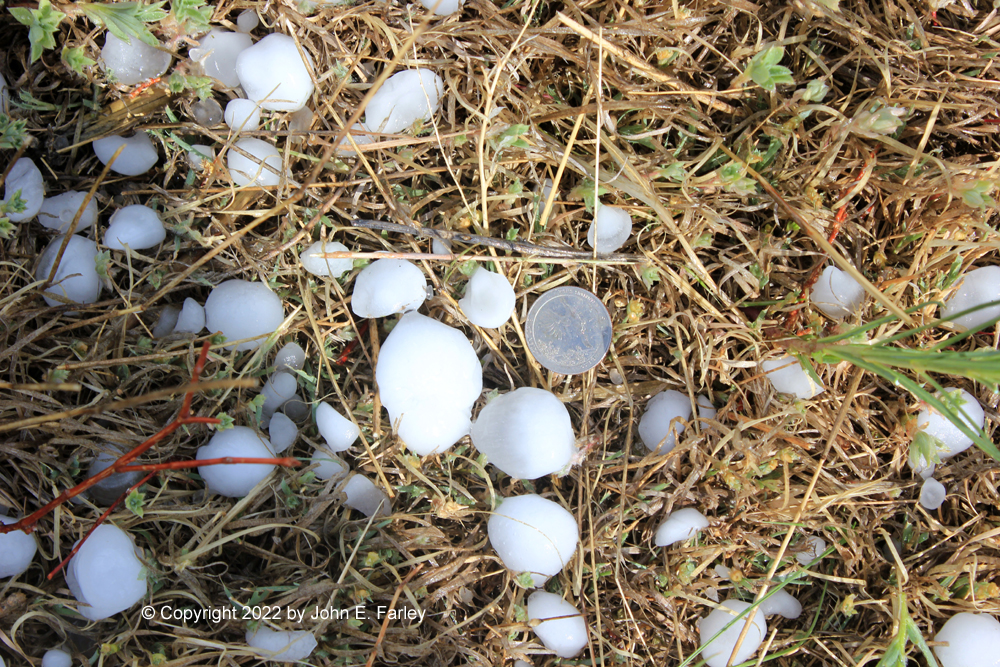 As I got into the area with the hail swath I was blasted with strong wind and rain wrapping around the storm from the NE - again in sunshine and thunder. On radar it looked like the storm was becoming a bit multicellular, almost splitting, but not really, as both its north and south cells were moving in the same direction and all the rotation in the storm was cyclonic. At this point I figured I had to try to get south of the storm again for any re-intercept, so I returned to Sugar City and blasted south from there on 71. Along the way I could see intense, sunlit hail shafts to my east and, ahead of them, what appeared to be some kind of condensation right on or near the ground - perhaps hail fog being driven ahead of the precipitation by the outflow wind? Or maybe it was blowing dust? 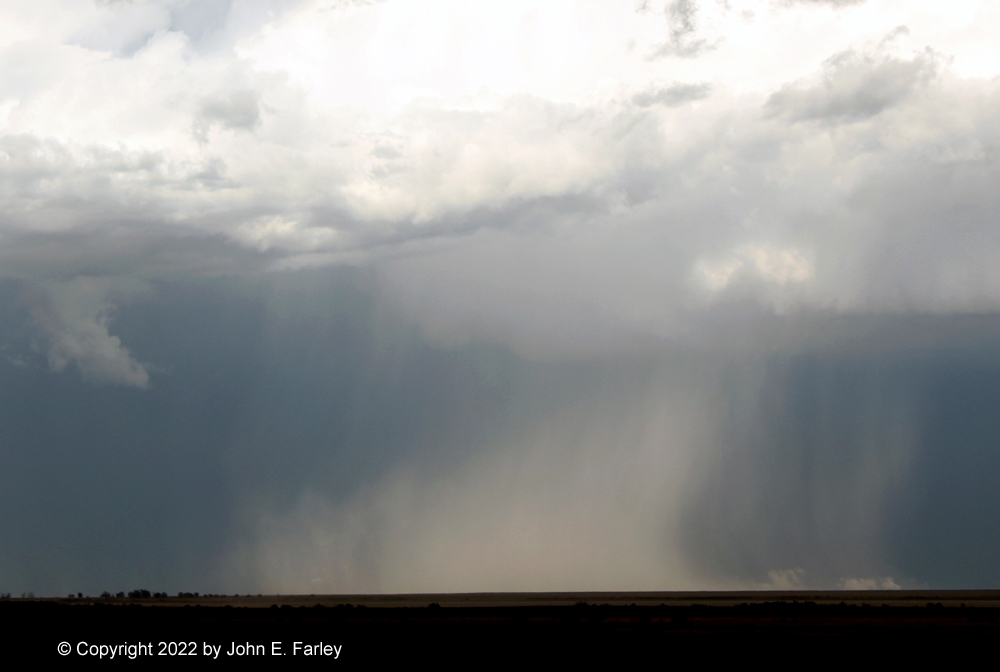 6:00 - 7:00 p.m. - I follow the storm along U.S. 50 from Rocky Ford to Lamar. It was evident there would be no getting south of it, but it offered me up sunlit rain and hail shafts, occasional lightning, and even sunlit mammatus with a rainbow as I followed the storm to Lamar. 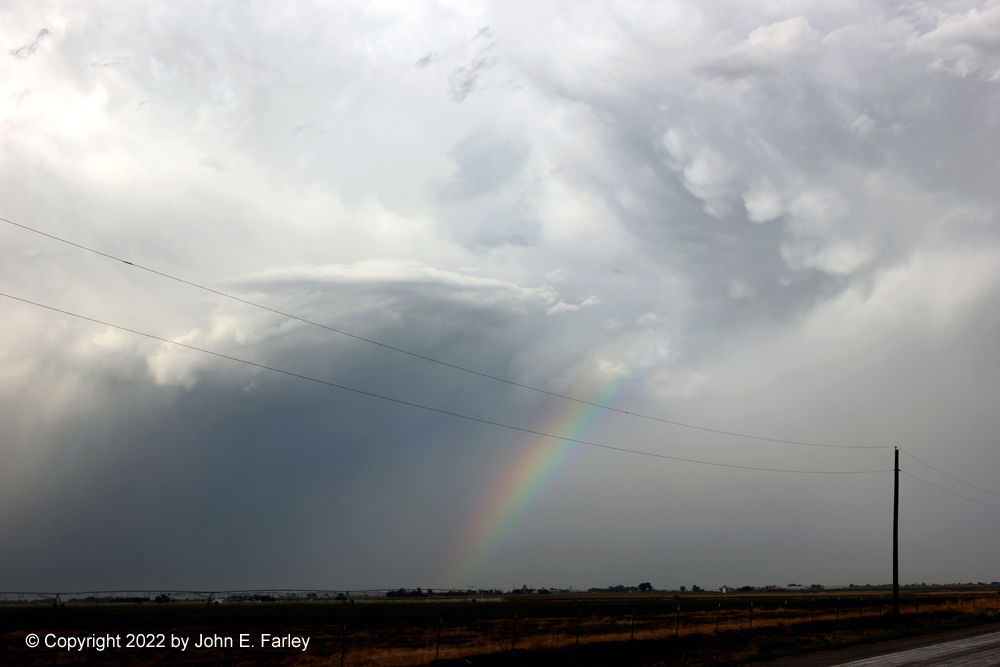 When I got to Lamar, I immediately noticed hail on the ground and leaves stripped from the trees. The storm I was chasing became the second severe storm to hit Lamar in about an hour, with a 63 mph gust at the airport, more hail in town, and hail of at least 1.9" diameter a few miles ENE of town. There was also considerable flash flooding. As I headed into town, I saw roads and sidewalks totally covered with leaves, twigs, and other debris stripped from trees by the hail, ground covered by hail, and flash flooding in places as well. At one location, city workers were nearly knee deep in water, hail, mud, and tree debris, trying to clear a drain to get rid of the flooding. 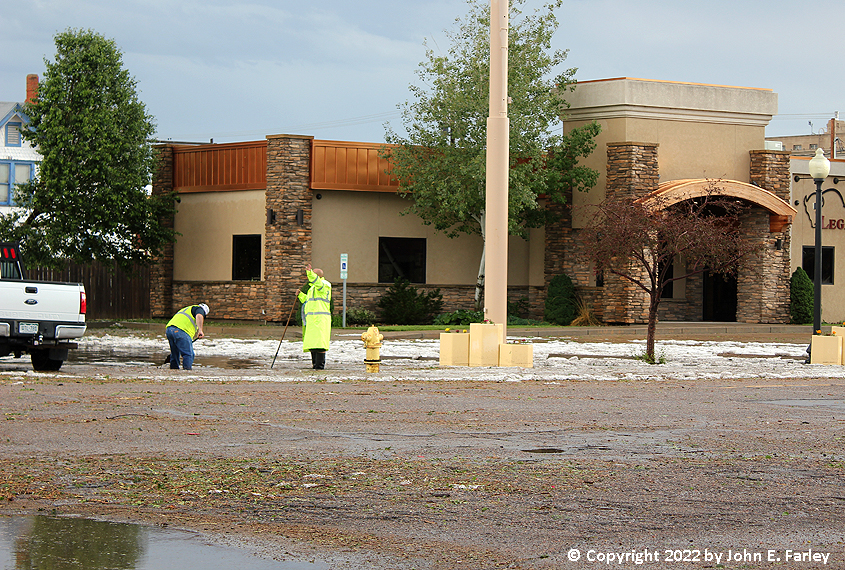 A bit later, after I found a motel and went downtown for dinner, I found areas of the downtown streets where the hail had washed in to a depth of over 6 inches: 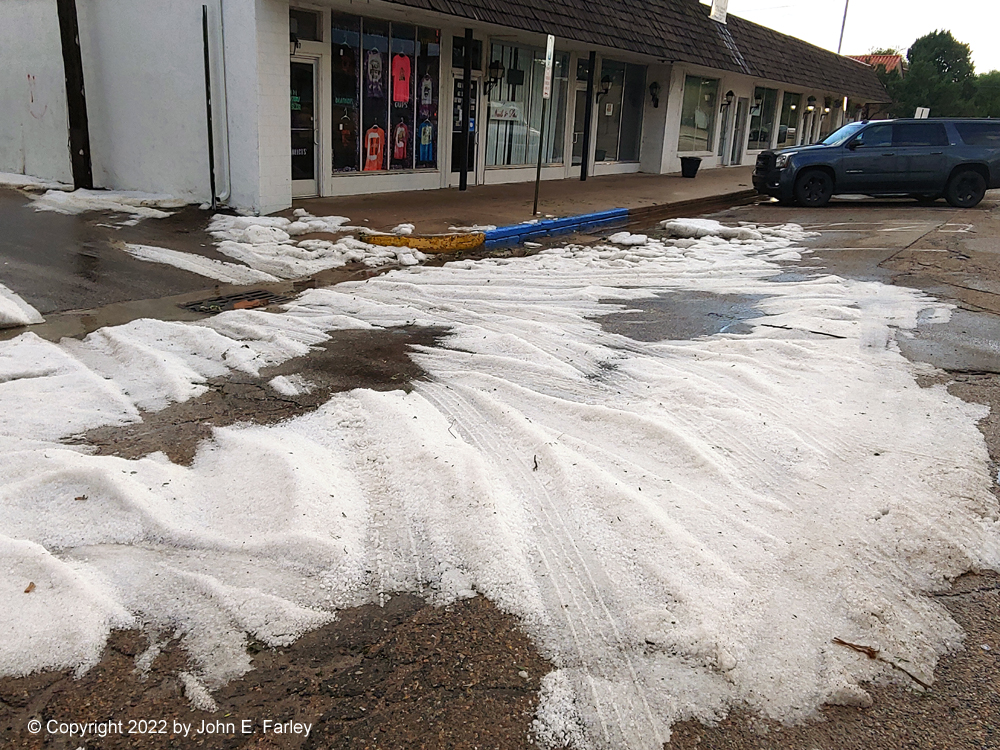 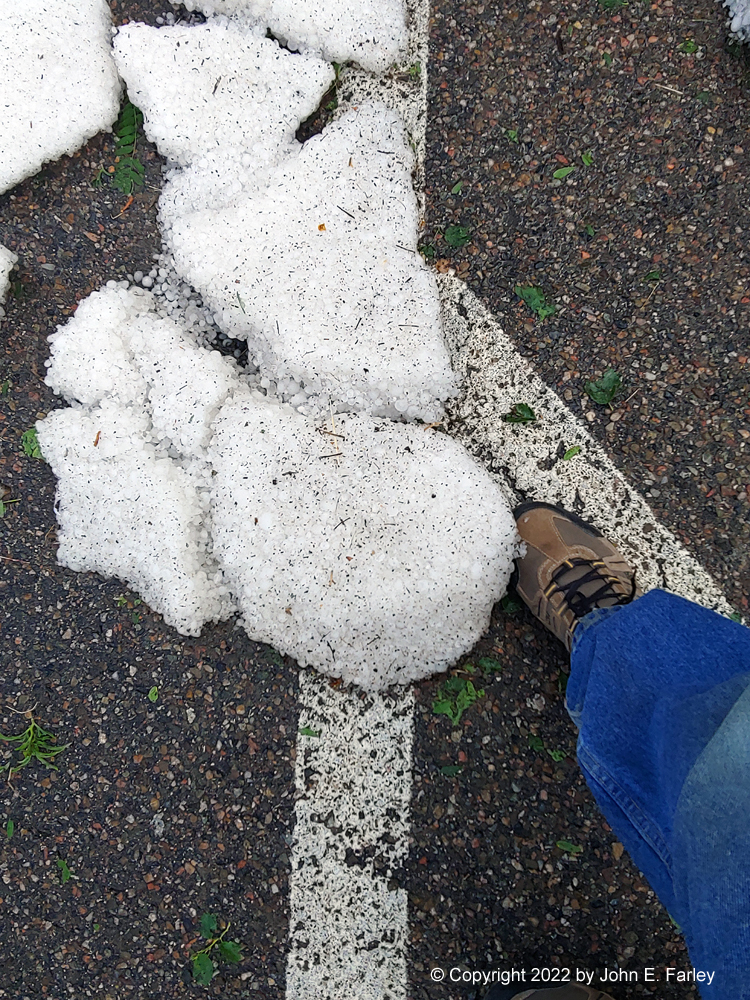 There were multiple areas like this in the downtown area on the west side of U.S. 287/385. And all over town, streets covered with leaves and twigs stripped from trees by the hail.

Chase distance for the day: 379 miles.