East of a dryline forecast to develop somewhere in the eastern plains of NM (different models differed on exactly where), there would be at least decent moisture (dewpoints in the 50s, maybe higher) and, by NM standards, considerable instability with CAPE projected to be somewhere in the 2000 j/kg range. Upper winds from the WNW and southerly low-level winds would provide ample shear for supercells, although deep-layer shear would be better than low-level shear. With a shortwave passing during the day, thunderstorms would be a near-certainty somewhere on the eastern plains of NM and CO, with a good chance of supercells and severe storms. Tornadoes would be possible, though not particularly likely, since the best shear and instability would be a bit higher in the atmosphere, not right near the surface. SPC had a 2% tornado outlook in eastern NM, but not eastern CO (though both were in the slight risk area), based on somewhat better moisture in eastern NM than farther north. I decided to target the area roughly along and perhaps a bit south of I-40 from Santa Rosa to the TX state line, depending on where the storms ended up initiating. And then possibly chasing the storms into the TX Panhandle, the western parts of which were also included in the slight risk and 2% tornado outlook.

10:15 to noon - Out the door from Santa Fe, planning to initially go as far as Santa Rosa and assess the situation from there.

12:00 - 2:00 p.m. - Got overpriced gas and had lunch in Santa Rosa. Storms had initiated near or in the mountains to my NW and SW, and were very slow to move east over the plains. By after lunch, towers and isolated showers/storms were also to my west, but farther west than the others, close to the Sandia Mountains. By around 2:00 p.m. this had become an intensifying cluster of storms around the general area of Clines Corners. The first Special Weather Statement of the day was issued just before 2:00 for a storm between Galesteo and Clines Corners. By this time, it seemed increasingly evident that the storms now under way were going to become the main event of the day, as there was nothing going on, either visually or on radar, to my east. So, based on the location of the storms and their expected movement to the ESE, I decided to hear down U.S. 54 toward Vaughan, figuring to be able to get a good view of the storms somewhere perhaps about midway between Santa Rosa and Vaughan.

2:30 - 3:00 p.m. - I am watching the storms to my west from NM route 219 just north of route 54, about midway between Santa Rosa and Vaughan. Just after 2:30, a severe thunderstorm watch is issued for eastern NM, much of eastern CO, and the western part of the TX and OK Panhandles. The strongest storm is northwest of Vaughan drifting slowly east, but other storms are developing to its east and south. A little before 3, a seconds special weather statement is issued for the storm northwest of Vaughan. Like the earlier one, it indicated a potential for 50-55 mph wind and nickel-sized hail. This storm was drifting slowly toward the east at 15 mph. Around the same time, I observe what may have been a shear funnel associated with another cell in the cluster closer to me: 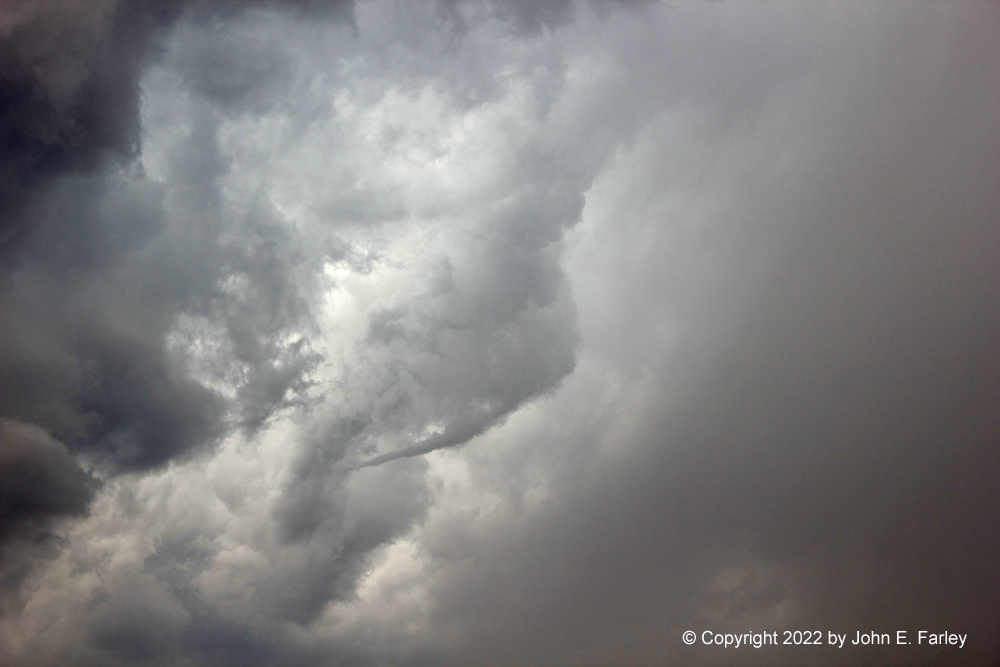 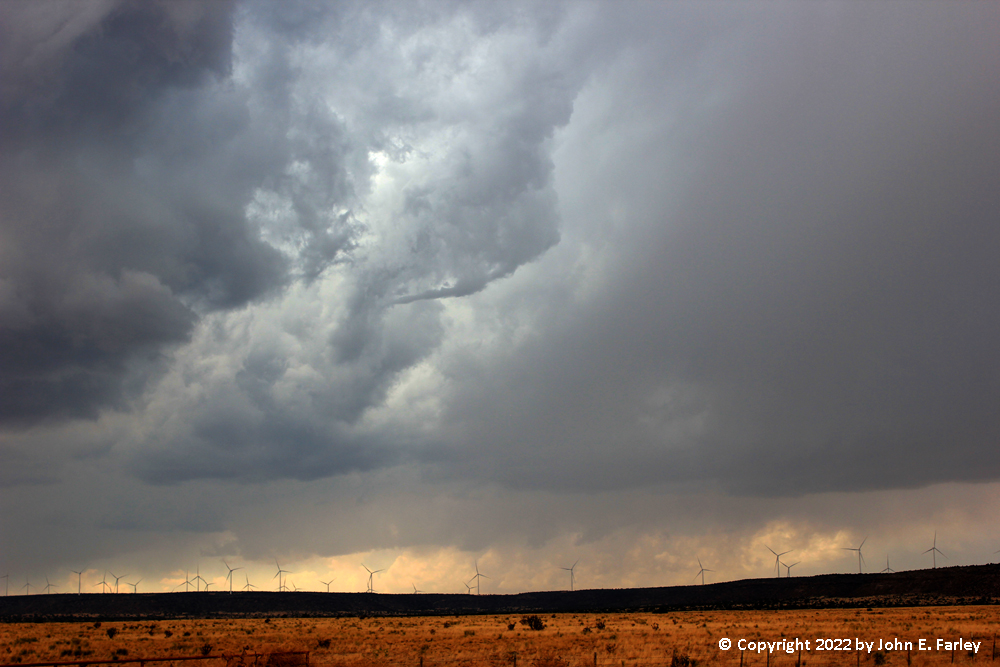 It was becoming evident that the storms were moving pretty much right toward my location, and that if I wanted to stay ahead of them and not end up in them or on their back side, I would need to backtrack to Santa Rosa and then head southeast on US 84 toward Fort Sumner. As I began to do this, I could see a large and strong-looking updraft base to my SW, basically southeast of the storm northwest of Vaughan and south or SW of the others in the cluser. I suspected this would become the main storm and that it might lead to the consolidation of the storms into one large, intesnse cell. Pretty much, that is what ended up happening.

3:00 - 4:30 p.m. - I backtrack to Santa Rosa and head toward Fort Sumner on US 84. What had been the large updraft base has become the main storm in the cluster, with the storms consolidating into one large, strong storm, as I had expected. At 3:23, the first in a series of SVR warnings is issued for the storm, for 60 mph and quarter-sized hail, with the storm 15 miles NE of Vaughan, near US 54, moving east. And from radar, it was evident that the storm was becoming supercellular. I was now too far east to have a good view of the storm, so I decided to cut west on NM route 203 to near Sumner Lake. With me heading west and the storm drifting east, I could close the gap fairly quickly and get a better view of the storm.

By the time I got near Sumner Lake, the lower part of the storm had taken on what I might describe as a "half a mothership" appearance, with the left part of the base clearly backlit but the right part either hidden in rain, less well-formed, or not visible due to poor contrast. Periodic lowerings formed under this feature: 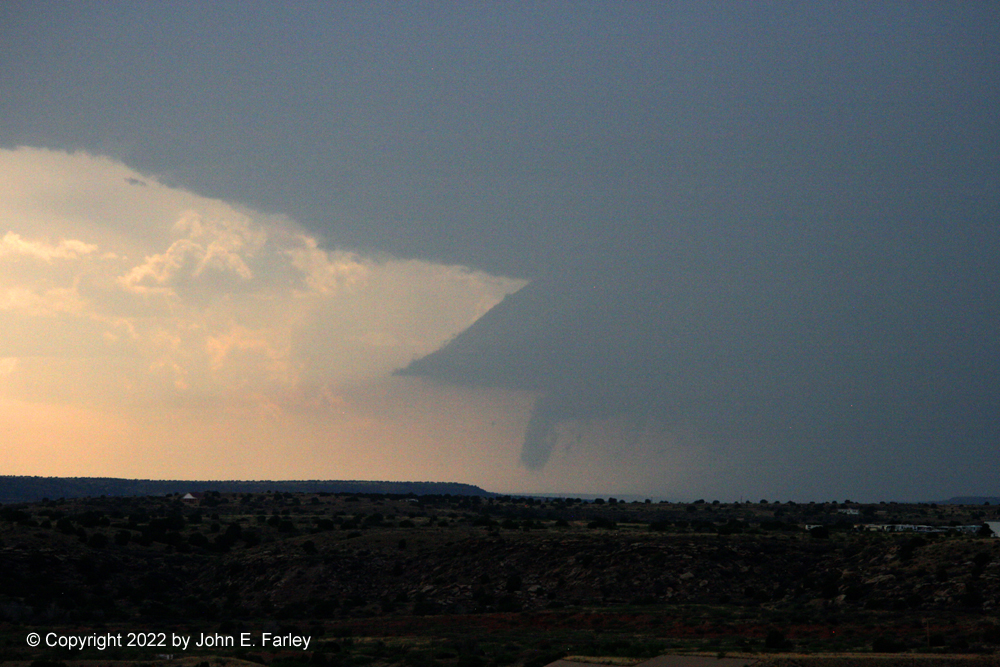 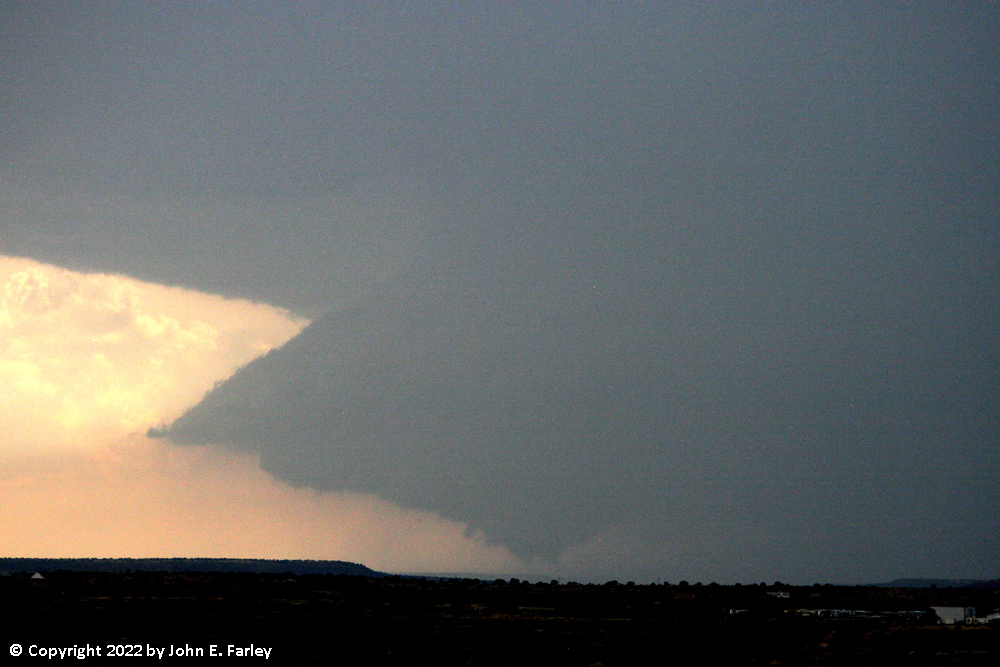 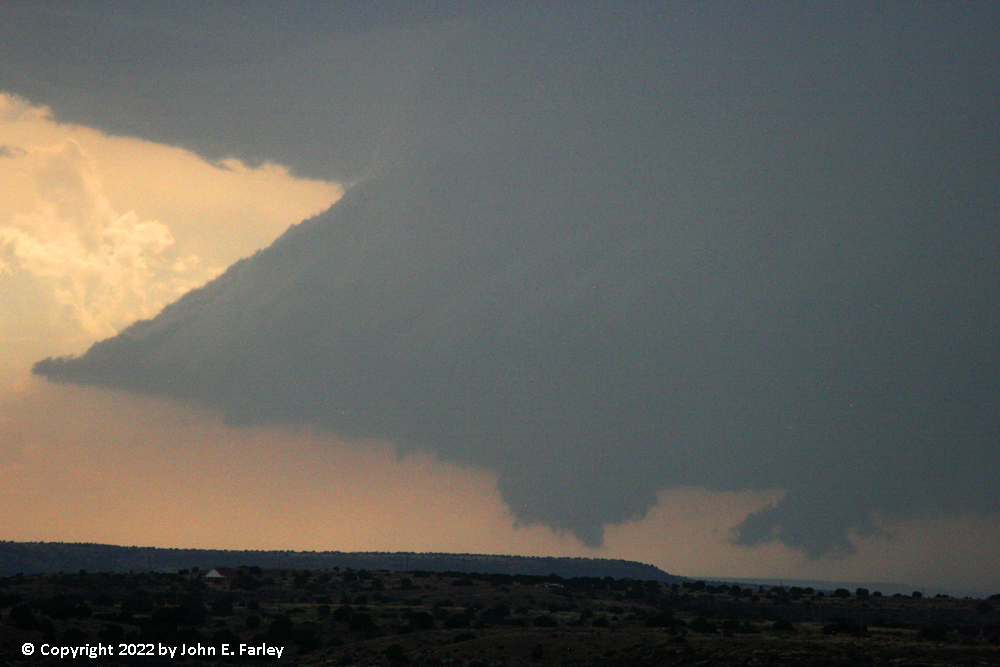 The storm was still too far away for me to tell whether any of these lowerings had any rotation, in addition to which I was looking at the base of the storm through some smoke, likely from a wildfire started by a positive bolt from the anvil of the storm. This smoke was being drawn into the storm by the inflow. I watched for a while, along with a handful of other chasers, as the storm slowly drifted toward me. Eventually I decided the storm was likely to pass over or SW of this location at some point, and I could not get closer without going on a gravel road in any case, so I decided to backtrack to US 84, drop south to Fort Sumner, and then head west from there on US 60 toward the storm.

As I headed toward Fort Sumner on 84, I noticed that fairly frequent CG lightning bolts were occurring from the anvil of the storm to the ground. When this happens, the bolts are usually positive bolts, and they can occur some distance from the precipitation core. Striking dry vegitation where no rain has yet fallen, these can cause fires, and it appears that at least two of them did. More on that later. 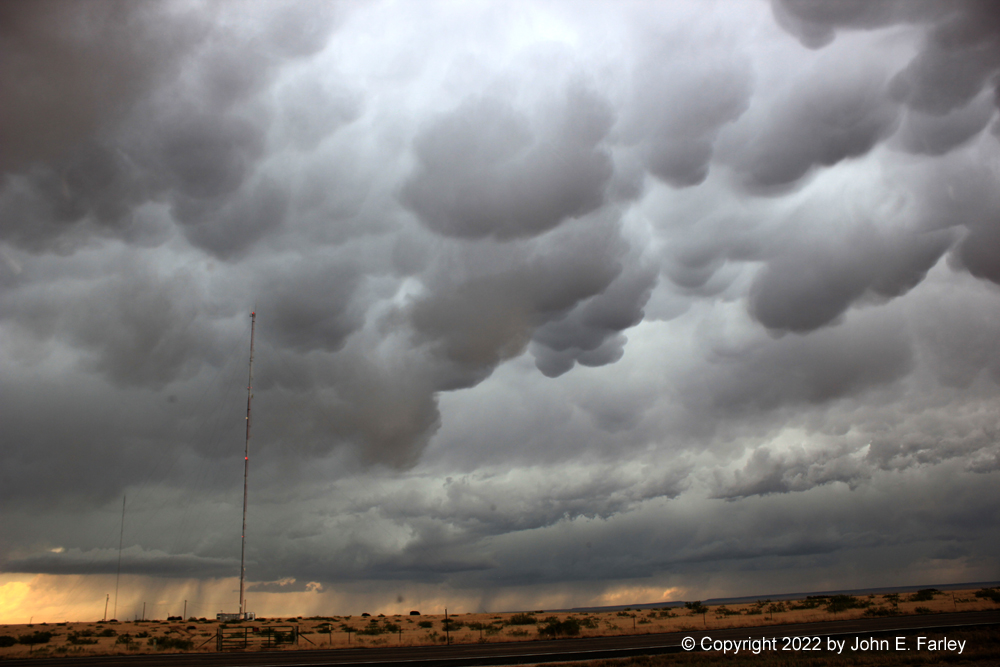 Since the anvil bolts were continuing at this time, I was reluctant to get out of the car, or even have the window down for too long, but I was getting an increasingly good view of the storm to my west, now much closer than I had been at Lake Sumner: 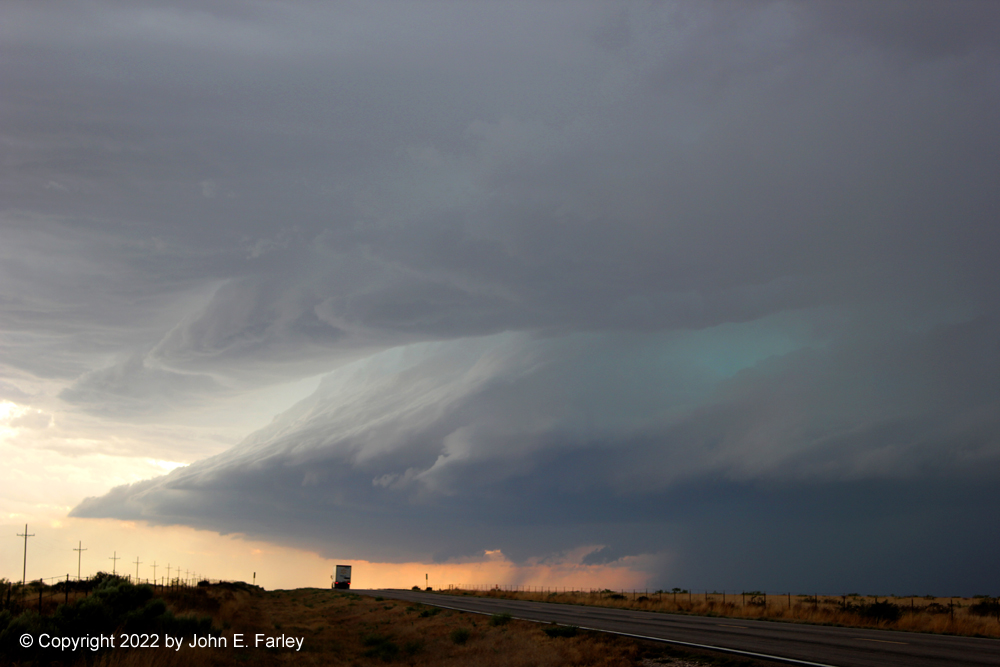 This storm prominently featured the blue-green color in the clouds that is sometimes associated with hail, and this storm definitely had some of that. And at the time I took this picture, thunder coming out of the cloud was pretty much continuous, along with flickers of lightning in the cloud - and an occasional bolt behind me from the anvil to the ground. I made several stops along US 60, gradually working my way closer to the storm. At one of my stops, there was what appeared to be a storm chase tour group parked across the road. Not sure this was necessary, but it is what they did. Now admittedly there was not much traffic, and when I was ready to go they did quickly get out of my way. That said, while I can see briefly getting in the middle of the road to get a "leading line" photo, I do not see any reason why it is necessary to set up your tripod in the middle of the road. And if you and some storm chaser driving toward you are both distracted looking at the storm, the result could be ugly. But, whatever.

The storm crossed the highway around 5:30, producing a report of golfball in Yeso, NM as it did. Here is a picture taken around that time: 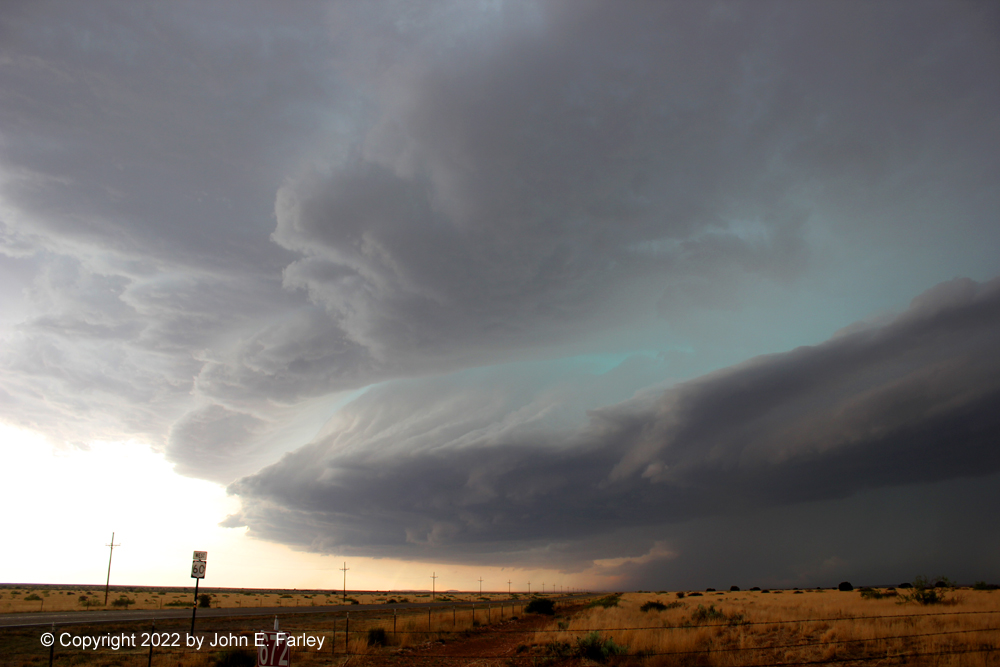 The storm was getting closer, and again, as it had now clearly made a turn from eastward movement to southeastward, my position at this location was becoming more undesirable. By this time, the storm had gotten two more SVR warnings, and ended up being continuously SVR-warned from around 3:20 through 7:15. I was starting to get a little bit of rain and maybe small hail, even though I was still a few miles east of the core. Hence, I began to backtrack east toward Fort Sumner, where I would turn south once more, to intercept the storm once more along NM route 20. Before I got to 20, I could smoke from another fire to my south, likely started by the anvil lightning. Just before I got to 20, a fire truck came out of Fort Sumner and headed down 20 toward the fire. I drove down 20 to within a mile or so of the fire, where I got this view of the smoke being blown into the storm by the inflow: 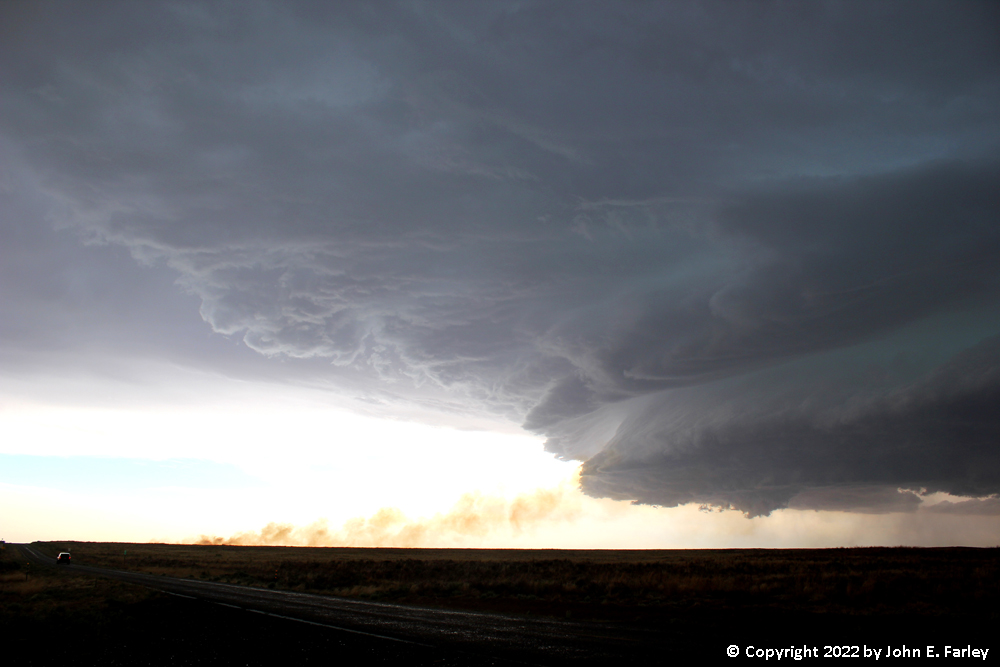 By now, the storm appeared to be getting a little more outflow-dominant, and in any case I was not in a position to keep up with it further given its southeastward movement and my position north of its track. There was quite a bit of lightning still, both in-cloud and cloud-to-ground (CG). So I decided to set up the lightning trigger, and managed to get this shot of a CG bolt: 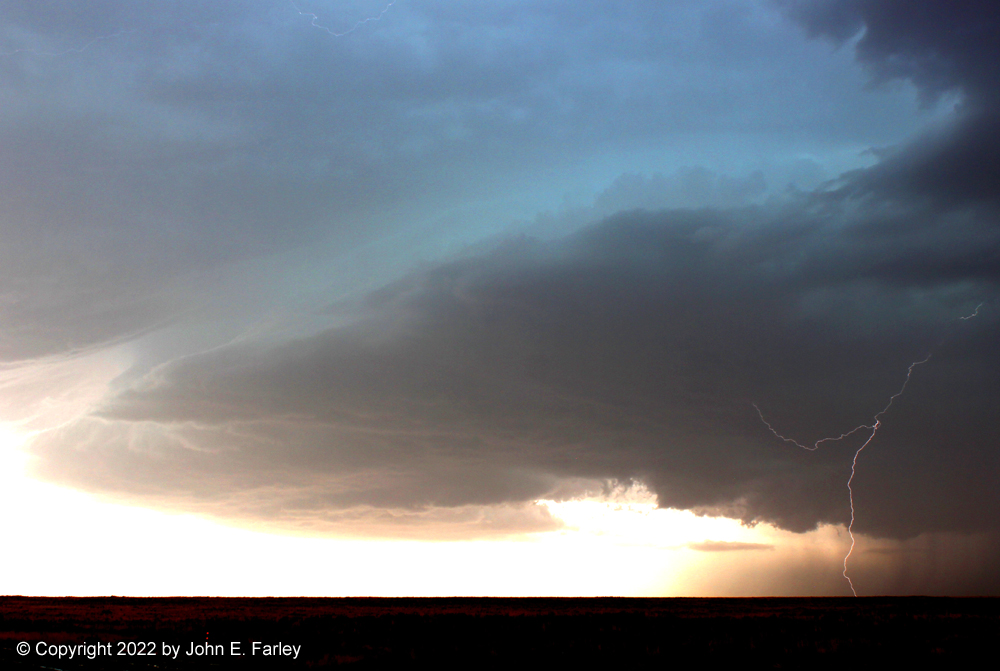 I like the colors in this shot, from both the blue-green color in the clouds and the backlighting from the late afternoon sun. Soon, I began to get into anvil rain, and maybe a little hail, as the storm moved southeastward at a somewhat faster rate toward the road ahead of me. I knew it was time to call the chase. By now, the radar also showed that the storm was starting to revert to how it began, as a cluster of storms rather than one dominant supercell, as it had been most of the time from 3:30 to 7:00. One more warning came out, for a new tail-end cell back to the northwest of Yeso. I would likely not have had a good view of this since I would have been in the rain had I headed for it, so I made a motel reservation in Santa Rosa and returned there for the night. On the way back there, I did catch a nice double rainbow north of Fort Sumner, looking into the anvil rain to my southeast: 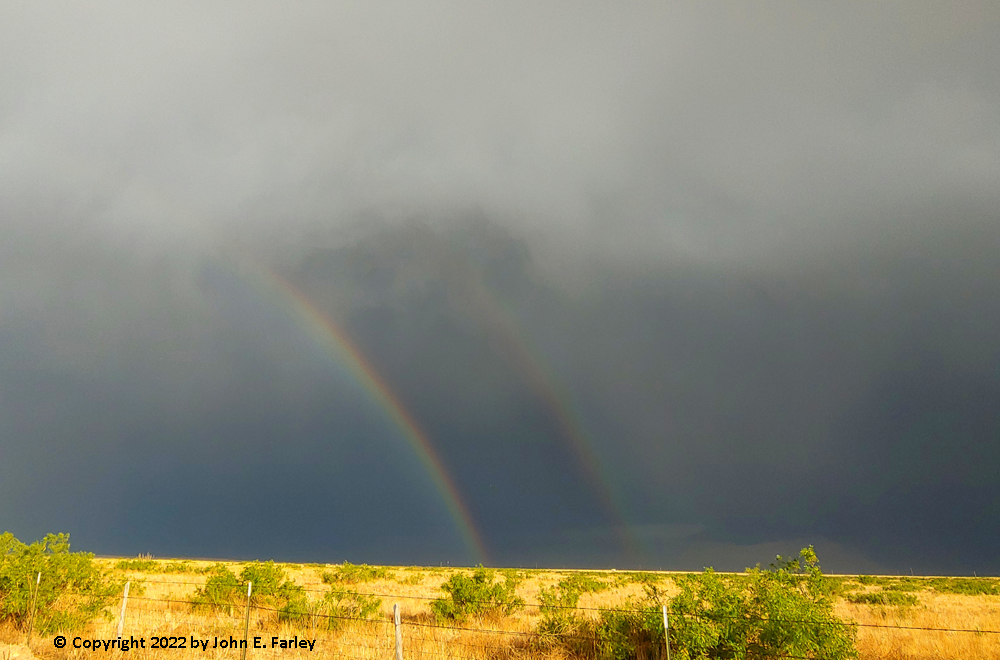 Chase distance for the day: 289 miles.

When I get around to editing my video, I may add a short clip.