With moist southeasterly upper flow, a dryline unusually far west, near the central mountains of New Mexico, and decent southwesterly upper flow, severe weather would be possible just about anywere in New Mexico east of the central mountains, and maybe even in some mountain areas, too. It would not be a great setup for tornadoes, but with the directional shear that was present, though not the strongest, they certainly could occur if a storm were to form near a boundary, such as the dryline or an outflow boundary, that would increase helicity locally. So I was definitely planning to chase, maybe starting somewehre near Clines Corners and working east from there. One fly in the ouitment for seeing supercells or tornadoes could te too many storms - moisture was very high, and some models showed storms all over the place. And for much of eastern NM, that is exactly what happened. And on top of that, the storms started early - a litle earlier than I expected. I knew it was go time when, already at 11:40 a.m. mountain time, SPC issued a severe thunderstorm watch for eastern NM and also including a part of southeastern CO. The watch even extended into the central mountains and in some cases a little beyond, including the Santa Fe metro area. It was a severe thunderstorm watch, not a tornado watch, but it did mention the possibility of a tornado or two.

I headed south toward Clines Corners, leaving around noon, and almost as soon as I was out the door, a SVR warning was issued for central Torrance County, basically in the area south and southwest of Clines Corners, but not extending that far north. As I travelled toward Clines Corners, the sky was already largely filling up with thunderstorm anvil clouds and other clouds in the mid-levels as well. And several other storms had gone up between the road I was on, Route 285, and the Sandia Mountains to my west. By the time I got to Clines Corners, the SVR warning had expired, but 15 minutes later a new one was issued for a similar area, but a little farther east, including the Encino area. I had been debating whether to head east toward Santa Rosa on I-40 or continue SE on 285. Now, with a SVR-warned storm 30 miles down 285 near Encino, I decided that was the way to go. Most of the way to Encino, the sky was just murky gray, with not much structure visible. But finally as I got near there I could see the storm to my west, with quite a bit of lightning, and through the precipitation a distant wall cloud to the SW. When I got to Encino in increasing rain, I tried going south toward Duran on route 3, but within a mile encountered hail. I would have had a great view of the updraft area of the storm if I had kept going that way, but with the storm still SVR-warned and hail starting to come down, I did not want to take a chance of having my car damaged by hail, so turned around and went east to Vaughn on 285. This would have been somewhere around 2:00 p.m. This diversion got me out of the hail pretty quickly and the rain a little later. By the time I got to Vaughan I was totally out of the storm, but due to its slow movement now had no decent view of its updraft area, which I was now ten or fifteen miles farther from. So from Vaughn I went SW ou U.S. 54 to Duran, then north on 3 to regain a decent view of the storm. By this time, the Encino storm was no longer SVR warned but continuing to produce heavy rain and probably some hail. However, another storm had gone up to the WSW of the original one. It had an impressive wall cloud, but it was even farther away than the original storm's updraft had been when I turned around because of the hail. Still, at the top of a big hill perhaps midway between Duran and Encino, I had a great view of the storm's updraft area: 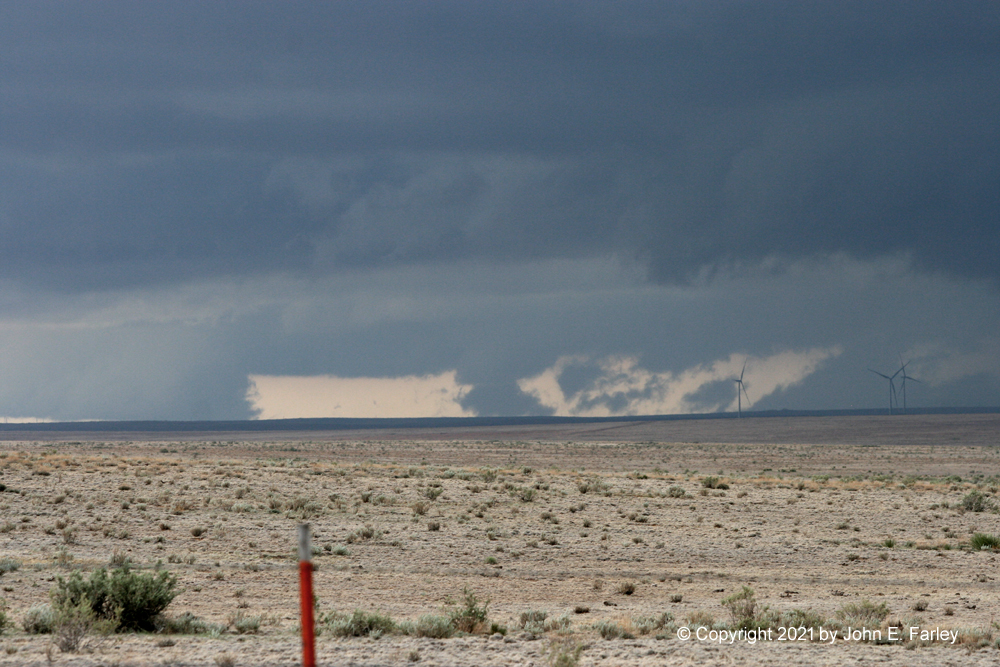 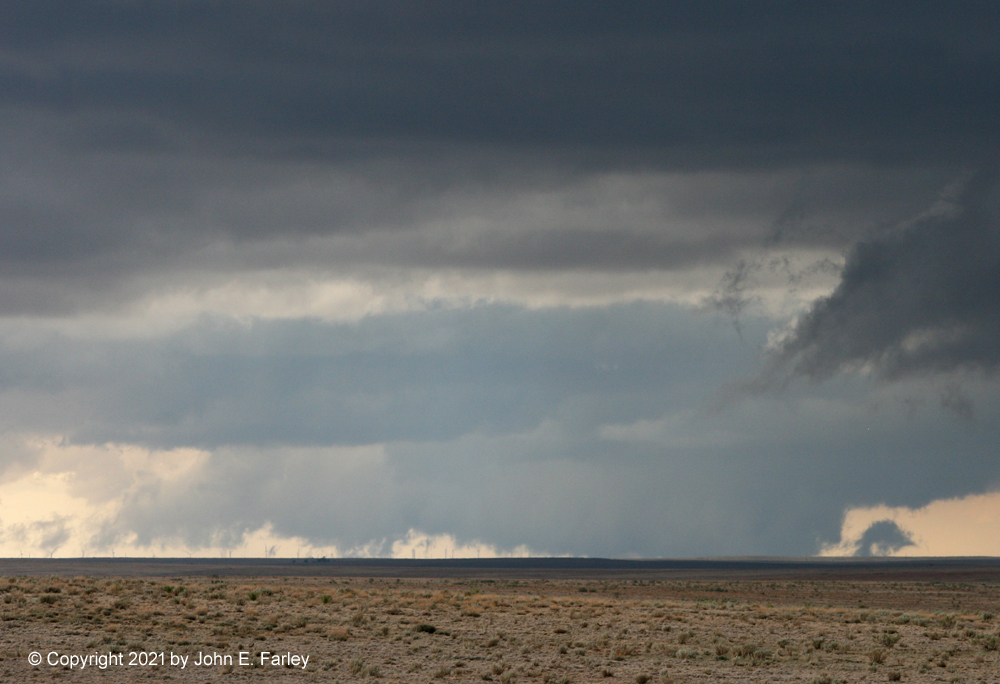 The first picture shows the wall cloud at the left, and to its right (north), some scud that eventually blends into the precipitation area. The second picture shows the entirety of the wall cloud. From these pictures, you can really see why they call them wall clouds - the northern edge of the wall cloud looks like a wall from the ground to the cloud. Now, it was almost certainly not touching the ground, as it was a long distance away and there was some high terrain between me and the wall cloud. The wall cloud was associated with the tail-end storm, one storm southwest of the one I had initially gone after, which by now had become more linear and was still pounding the Encino area with torrential rain and probably some hail. And that closer storm had some decent structure, too, off to my northwest but much closer than the tail-end storm: 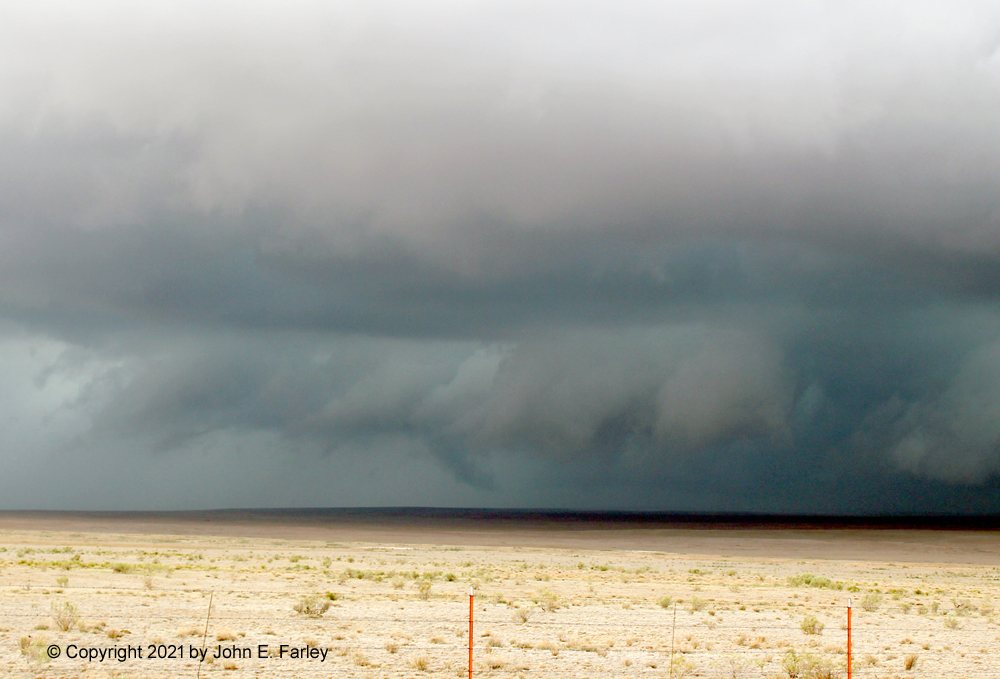 I think this is largely an outflow feature, probably including the lowered area underneath - but it was interesting to see. Directly to my north, over Encino, the sky looked something like this almost the entire time I sat at this spot: 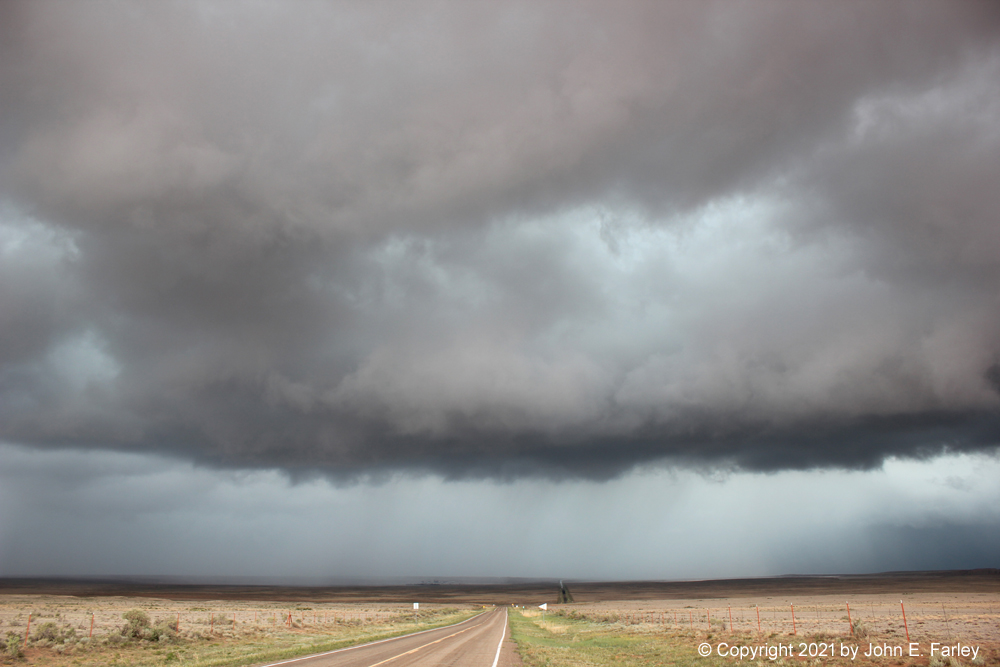 Here is a wider-angle view of this line of storms, using a panorama photomerge:

Now turning back to the tail-end storm farther to my west, some impressive lowerings formed at times under the wall cloud: 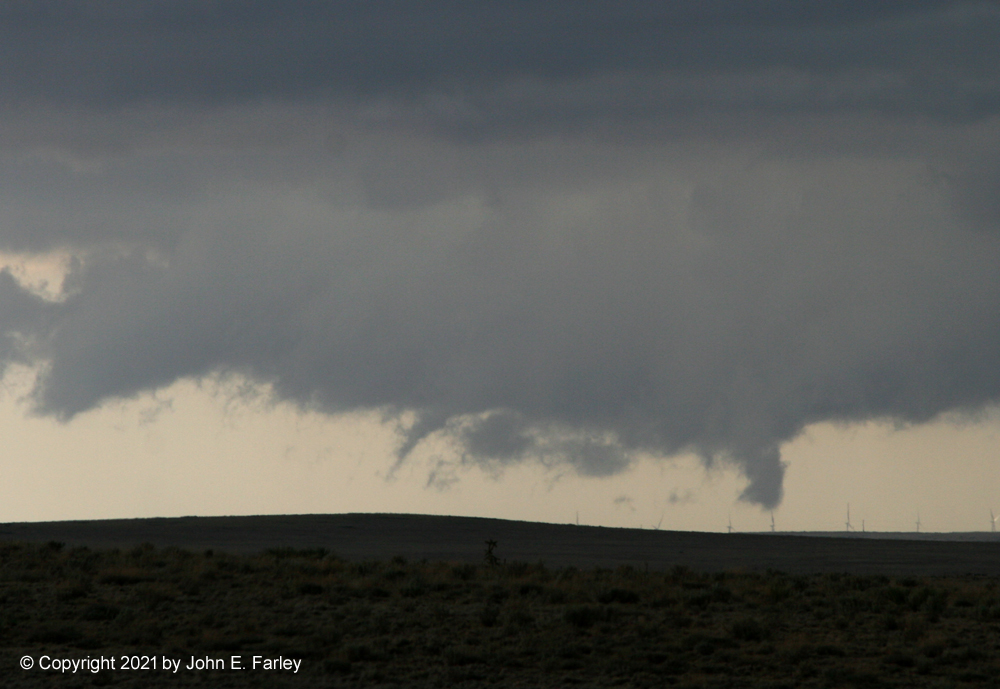 I was too far away - 15 or 20 miles, at least - to tell whether these were scud fingers or funnels, but I would think more likely scud fingers, as they did not persist for too long and the storm never had a TOR warning (though it did get special weather statements for up to nickel-sized hail and 50 mph wind). But even though I was far away, my 300-mm zoon lens let me get some decent pictures.

I sat at this location watching the storm for quite some time, probably at least a half hour and maybe 45 minutes. Finally it began to lighten up a little to my north around Encino, so I decided to head up that way and take a look. What I found was a lot of field flooding, and several places where Route 3 was flooded, with water running across. Nothing too deep to safely get through, but still quite a bit of water. Enough that I called in a report of the flooding to the NWS in Albuquerque. Then I headed back down toward Duran. Here is a picture taken a short distance out of Encino as I was heading back south, showing the flooding: 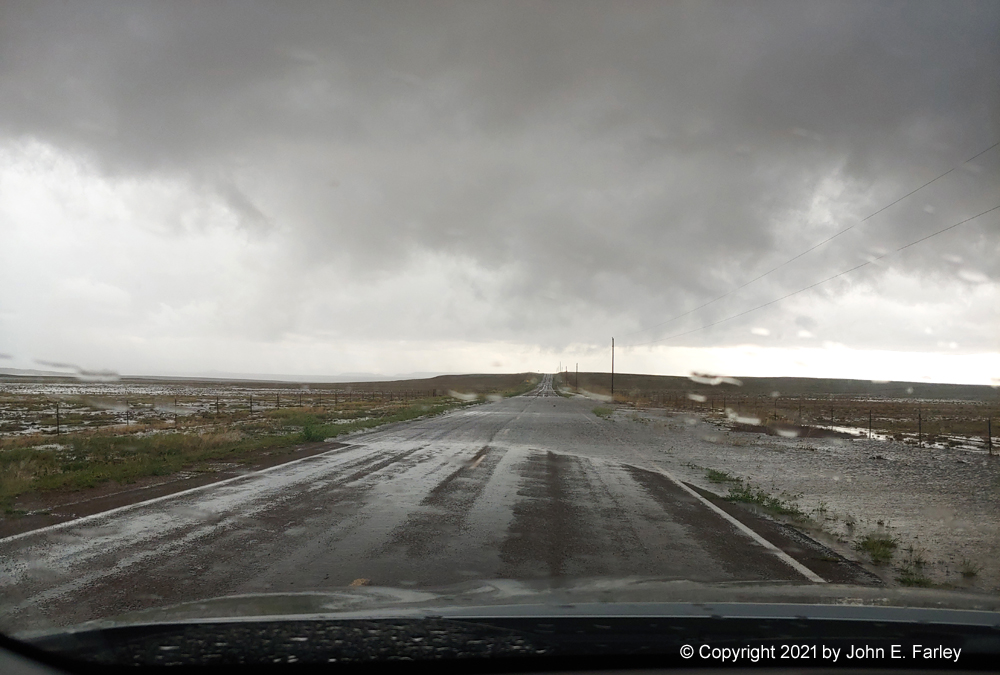 Once I got back toward Duran, it was evident that the tail-end storm was getting closer - and it still had a decent wall cloud, though not as impressive as earlier: 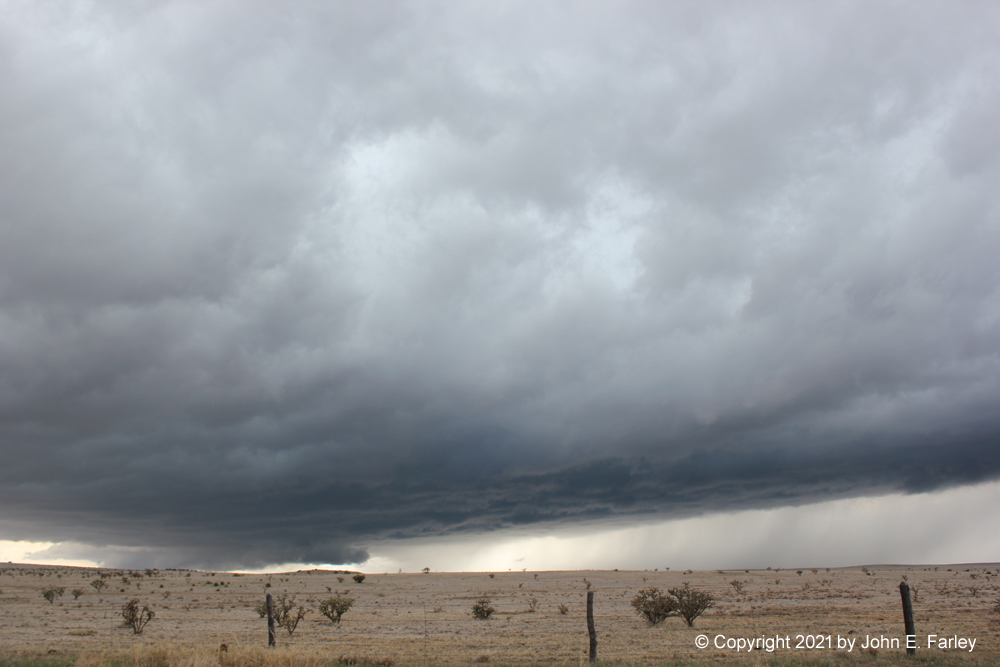 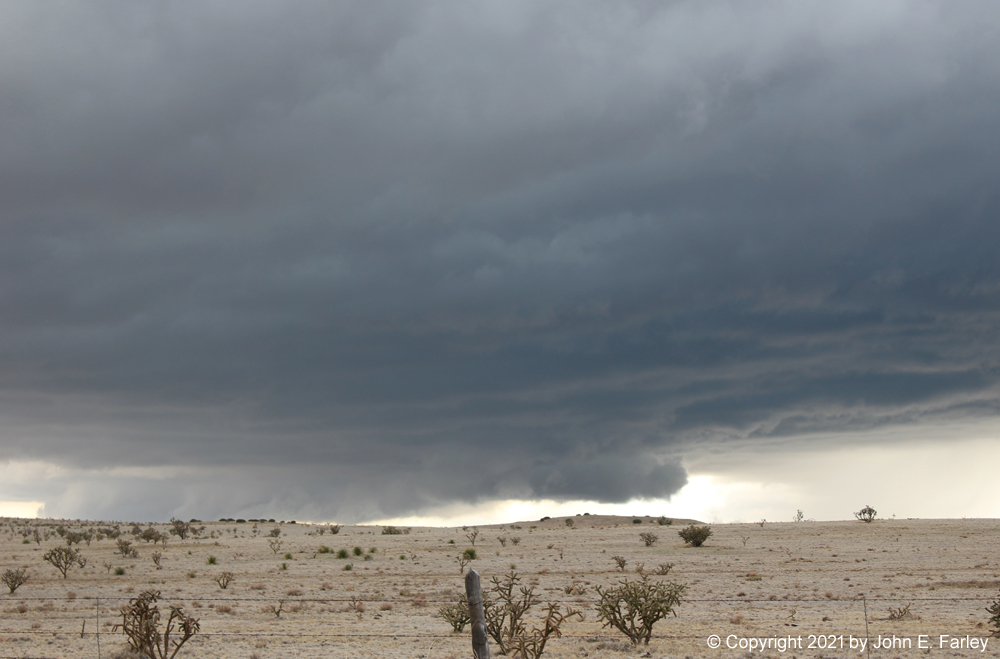 I hung around Duran for a while, as the storm seemed to be headed directly for that area. From the east edge of Duran, I watched as the cloud base above me and to the south streamed north or northwest into the storm. There did apear to be some large-scale rotation, as the clouds in front of the wall cloud and along its front edge pushed north, while the center and back of the wall cloud surged southwest. A scuddy inflow feature also formed on the northeast side of the wall cloud and surged southwest into it. A new special weather statement was issued for dime-sized hail and 40 mph wind as the storm neared Duran - apparently at this time it was strong but not severe. Not wanting to get into hail, I stayed ahead of the storm up to near Vaughn, where Route 54 runs into 285. From there, I headed back up 285 to Encino, through the northern edge of the heavy precipitation in the storm. I encountered fairly heavy rain and some soft hail or possibly graupel. The temperature had by now fallen in to the 40s. When I got back to Encino, I saw a house surrounded by water with its detached garage and almost all of its yard flooded. In the rain and highway traffic, I could not get a picture, though. By now, I had made the complete circle of Encino, Vaughn, and Duran twice, once clockwise and once counter-clockwise. Never really got out of that general area the entire chase. At that point I figured the chase was over, and returned to Santa Fe in on and off rain and thunderstorms, though it cleared by the time I got to Santa Fe. The city had earlier been under a severe thunderstorm warning and I did see a couple branches down, but not much rain fell there on this day.

On the whole, my concern about too many storms to get isolated supercells or tornadoes on this day was realized. In most of New Mexico, too many storms to easily chase and too many storms for isolated supercells or tornadoes. That said, there were four tornadoes reported in NM on this day. Three of them were far to the northeast or south, on the edges of the large area of storms, in places where the storms could ingest inflow not contaminated by other storms. One of the tornadoes was part of a cluster of tornadoes that occurred with supercells that begain in southeast CO, clipped extreme northeast NM, and them moved into the OK Panhandle. Two of them were south of Roswell. The only one I might have had a realistic chance of reaching would have been one that occured northeast of San Jon, near the TX state line a little north of I-40. I suppose that had I gone east through Santa Rosa and kept going, I might have had a chance at that one. But, realistically, I doubt it. With the exceptions of these mostly-brief tornadoes, for the most part there were indeed too many storms in NM to get an isolated supercell or high-visibility tornado. But despite that, the storms I did see were impressive at times and offered up some decent photo ops.