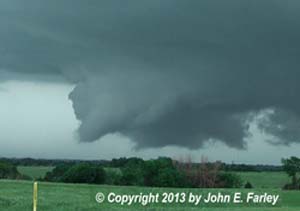 I am dedicating this chase and chase report to the memory of Tim Samaras, Paul Samaras, and Carl Young, three chasers and severe storm researchers who were tragically killed in a tornado the next day just a short distance from where I chased on this day. RIP Tim, Paul, and Carl - you were the best of the best!
This looked to be another in a string of several days of severe weather in Oklahoma and nearby areas, although today's action would be farther southeast than the previous day. The dryline today would set up southeast of where it was the previous day, meaning that, west of I-35, storms would occur mainly south of I-40. They would be farther north as you go east, but the quality of chase terrain declines as you go east, and also at the end of the day I would have to drive west, as this was the last day of my multi-day chase trip to Kansas and Oklahoma. Southeast of the dryline, though, there would again be plenty of instability and at least decent wind shear, so for yet another day, supercells appeared likely.

I left my hotel in Elk City around noon and headed east on I-40. I noticed that what had been a broken line of very widely scattered weak convection (light showers, really) to my east and south earlier in the morning was now starting to get seriously organized. This line had actually weakened through the course of the morning, so there were virtually no radar returns south of I-40. But now it was getting organized. There were now a few cells along the line which appeared to extend from somewhere north of OKC across 40 perhaps around Weatherford and on to the south. After a while I fired up the radar and noticed that a cell to the south which I had been able to see earlier (and it was already starting to look pretty good, but now was hidden by other clouds) was getting its act together. It should be easy to interecept by blasting east on I-40, which I was already doing, then dropping south ahead of it to get on the southeast side of it. Just needed to be sure I got far enough ahead of it to do this safely without ending up in the storm. Decided El Reno would be the best choice and then head south on 81 for an intercept perhaps somewhere around Chickasha. By the time I was heading down 81 the storm was SVR warned and producing hail as large as golfball around the Anadarko area. It also had a nice hook echo on radar, something that would continue much of the day. Looking at the map, it looked like my best option would be to head south along the west side of Chickasha, perhaps eventually going as far southwest as Norge to get a good look into the hook. But by the west side of Chickasha, I could already see the wall cloud very well, so stopped for a while to get pics, along with some other chasers. Quite a bit of CG lightning at this time also. This would have been some time around 2:00 p.m. Since the wall cloud was moving more or less directly at me, I did indeed drop south then a little more southwest to Norge, to get out of the path. There, I watched, photographed, and videoed the storm for maybe fifteen minutes, perhaps from about 2:15-2:30. Fascinated to see there was a helicopter on the storm; you can see it in some of my photos and video. During this time the storm had a very large, menacing wall cloud, with some rotation at times, but not as strong as I would see later. Here is a video capture: 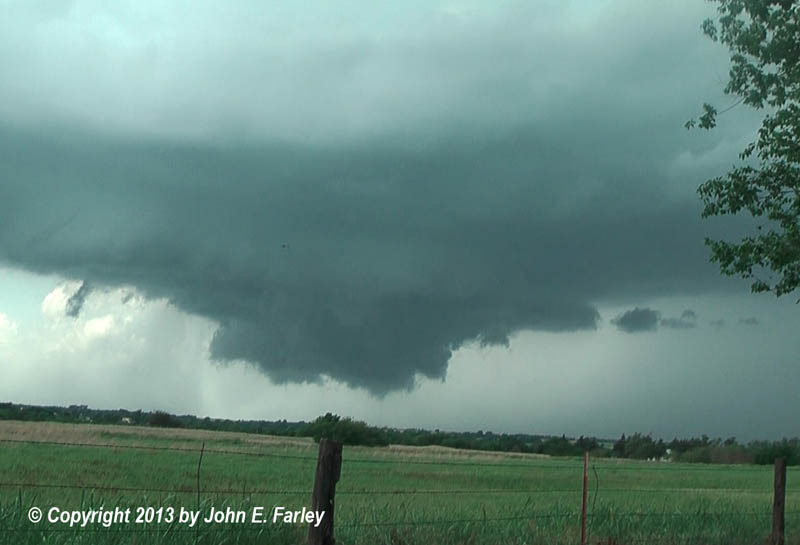 By the time the meso was about due north, I knew it was time to move, so headed east on a back road out of Norge to 81, then up to I-44 traveling NE for one exit, then east on 62. Around this time the storm cycled, forming a new mesocyclone east-southeast of the original one, which appeared to occlude. It was shortly after this that I made my only real navigation mistake of this chase - stayed on 62 instead of turning right on 39. The problem is that 62 angles NE, which would take me into the path of the storm, while 39 continues more or less straight east. I did not realize this error for a while. I passed the OU mobile Doppler radar which was scanning the storm. By now it was raining, and soon after the rain increased, and a bit of hail started to mix in. This is when I took another look at the map and realized I was angling northeast, which was gradually taking me into the core of the storm, though what I was in was far from the heaviest part. Not sure of the hail size, but would guess dime to nickel from the sound of it. I am sure there was bigger hail somewhere to my north or northwest. The original SVR warning for the storm had expired while I was watching the storm from Norge, but by now it had a new SVR warning.

Fortunately, I had the option of turning south on 76, which gradually took me out of the hail and the rain. Turned east onto 39 and into Dibble, around which time the storm got a tornado warning. This warning was issued at 3:18 p.m., valid until 4 p.m. I stopped again and could see that the wall cloud, though less solid and more scuddy than it had appeared near Chickasha, was now strongly rotating. In addition, the supercell had taken on an impressive barreled structure, with a vault to its northeast that probably had some good-sized hail falling in it. Here is a picture of the storm at this time: 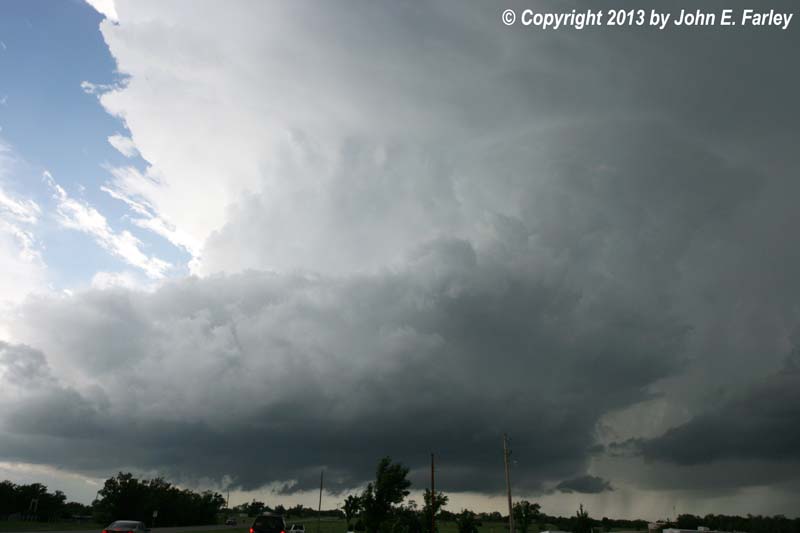 Since the rotating wall cloud was moving pretty much in my direction, or perhaps even on a course to pass slightly south of me, I decided to drop south a little more when I got to route 59. Passed Roger Hill's tour group and turned down a side road a couple miles later, found a good viewing spot out of the chaser traffic, and watched the still very strongly-rotating (but also still rather scuddy) wall cloud for another 10-15 minutes. It made what could have been a couple attempts at funnel clouds and had strong, persistent rotation, but could not tighten up and produce a tornado. One by one the handful of chasers near me bailed out and headed south or east. When the meso got within a mile or two, so did I, heading south a bit then east on a back road. Stopped again to watch the storm, but by now the wall cloud was much smaller and did not seem to be rotating strongly. There were some other ragged clouds extending low to the ground farther to the northwest, but overall the storm looked less threatening. I continued east to route 24 and headed back north, as the storm was now drifting more to the northeast and getting farther from me. When I got back to 39, I thought about calling the chase since I needed to drive to somewhere around Amarillo, in order to be able to get home the next day as planned. But I decided to watch the storm a little longer, and am glad I did.

When the tornado warning expired at 4, it was replaced with a SVR warning, with the storm near Washington. Once I decided to continue the chase a bit more, I ended up in a high spot along route 24 a little north of route 39 and a few miles south of Washington. By now, perhaps 4:10 or 4:15, the storm was to my northeast, but it formed another large and strongly rotating wall cloud, which I could see quite well despite my location southwest of the storm - for a while. And then a large funnel cloud formed on the back side of the wall cloud, extending toward the ground at a 45 degree angle. I've seen features that looked like this before that were not true funnel clouds, but this one was, as it was strongly rotating and my video clearly confirms that. I, along with the local volunteer firefighters I was now watching the storm with, thought that a tornado was imminent. Here is a picture of the funnel cloud: 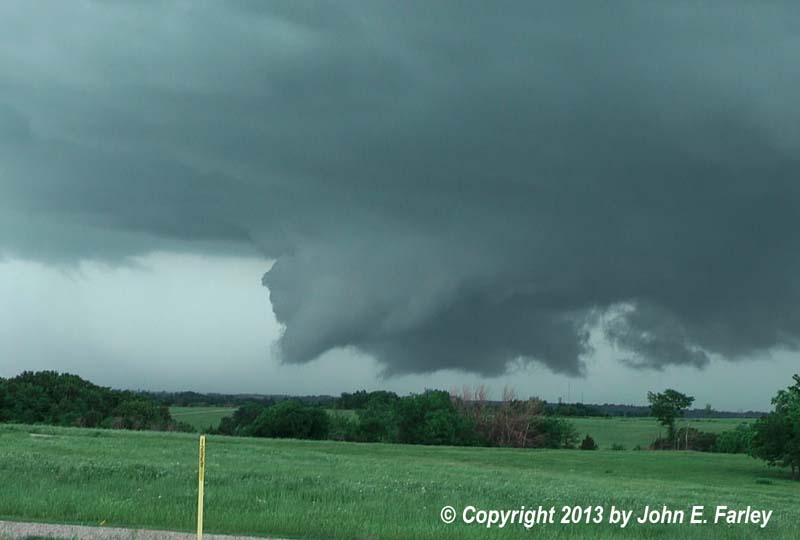 As you can see, it extends more than halfway to the ground. But despite its menacing appearance, and despite the strong rotation of both the funnel and the whole wall cloud, there was apparently no tornado. The funnel was absorbed back into the wall cloud, which continued to rotate but got wrapped in rain. Perhaps ingestion of the rain-cooled air prevented the storm from producing a tornado. Probably a good thing, since by now the rotation was close to the north edge of Purcell, OK, passing perhaps just to the north of the city. What I can say is that I have never seen a storm that rotated as much as this one did without producing a tornado. There was strong, sustained rotation near Dibble and again near Purcell. I really think it came the closest to producing a tornado when it was near Purcell, but it apparently did not. Another observation I would make is that I was a little disappointed in the chase terrain in this area. I know it is generally not good east of I-35, but I was west of 35, though close to it by the end of the chase. You will notice that there are plenty of trees in all of my pictures, and through much of this chase it was an effort to find a spot with a clear view of the storm, although I generally did manage to do so.

Since from this vantage point the wall cloud had pretty much disappeared in the rain, I decided to head a little farther east and see if I could get a better view. Again turning north to get a vantage point in a high spot, now within sight of Purcell and I-35, I could see the wall cloud somewhat through the rain, but it appeared less menacing now and not nearly as low to the ground. This was a nice stop, though, as I had a pleasant chaser convergence with four chasers from Austria and a local older couple who seemed very knowledgeable about weather and storms. We all had a pleasant visit, and the Austrians were kind enough to let me take their picture. This was a nice end to a pleasant chase day and my 3-day chase trip. The storm was now moving away from me, getting well on the wrong side of I-35, and it was nearing 5 p.m. and was time for me to start back to the west. On my way back up 81 to El Reno to get on 40, I stopped just outside Minco or Union City to photograph an overshooting top on the storm that produced tornadoes in the Guthrie, OK area that evening. I had no idea of the horrors that were to unfold just a few miles from where I was 24 hours later, and I am glad that I did not chase May 31. This was the second time this season that horrors unfolded in the OKC area while I was driving home from a chase trip, and this time it tragically affected the chase community as well as local residents. I can only extend my thoughts and prayers to all affected, and be grateful that I was not there to personally experience it.